Accessibility links
Smart And Snarky, 'The Westing Game' Provides Lasting Laughs As part of our summer-long celebration of funny books, we've asked our writers to talk about things that made them laugh, like Ellen Raskin's witty and chaotic inheritance adventure The Westing Game. 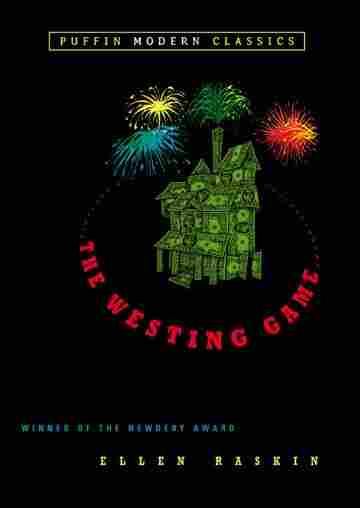 Humor is incredibly subjective. It's unique to each person. So much so that my very first fiction writing teacher instructed us to never even attempt it. Instead of accepting the challenge this was probably meant to be, I took the lesson to heart. I already knew I had a strange sense of humor.

Crassness and slapstick didn't move me. I assumed I was missing the genetic code that found joy in the Three Stooges. I did not appreciate (or even understand) Wile E. Coyote and the Road Runner until I was a much older adult. To me, Cole Porter is a genius. Give me Shakespeare or Ogden Nash, and I am hooked by the first line. From Lewis Carroll to Carol Burnett — if it is smart, dark, subversive, and multi-layered, I am all in. The more complicated, the better.

So when I tell you all that I think Ellen Raskin's The Westing Game is one of the most perfect books ever written, you'll understand where I'm coming from.

The first line is one of those famous ones: "The sun sets in the west (just about everyone knows that), but Sunset Towers faced east." Not only does this prepare you for the topsy-turvy quirkiness you're about to experience, it also introduces the fabulous omniscient voice in which the story is written. This voice seamlessly pops in and out of the heads of Raskin's eccentric cast of characters, revealing to the reader their deepest, darkest secrets, while also totally talking about them behind their backs. The wit (and ubiquitous parenthetical snark) of the book's voice is, in my opinion, matched only by William Goldman's The Princess Bride (my other favorite book), published a mere five years before The Westing Game.

The wit (and ubiquitous parenthetical snark) of the book's voice is, in my opinion, matched only by William Goldman's 'The Princess Bride.'

The first line is also a clue. (Even the title itself is a clue!) Six households are invited to move into the exclusive Sunset Towers apartment building. The members of these families (plus a few employees) are then named in the will of the illustrious departed millionaire Sam Westing. But this is no ordinary will: Sam Westing has invented a game for his heirs, and only the one who solves it gets the money.

And these characters! A diverse assortment of misfits, each with their own mysterious connection to Sam Westing, each with their own skeletons in the closet, each so wonderful that it's almost impossible to pick a favorite (it's Turtle). My favorite lines in the book are the ones that sum up this cast in a nutshell: "Who were these people, these specially selected tenants? They were mothers and fathers and children. A dressmaker, a secretary, an inventor, a doctor, a judge. And, oh yes, one was a bookie, one was a burglar, one was a bomber, and one was a mistake. Barney Northrup had rented one of the apartments to the wrong person."

Despite the seemingly illogical jumble of disastrous events that unfold as the game goes on, everything that happens in this book happens for a reason. It's one of those tales you finish with awe and then start again at the beginning, in an attempt to find all the Easter eggs you missed the first time around. You'll laugh and laugh — you may even cry — and if you're anything like me, you will reread it every Fourth of July, just to keep the magic alive.

Which is a perfect line with which to end this essay, but I must add one final thing: If you are a fan of The Westing Game, you must also read Ellen Raskin's The Tattooed Potato and Other Clues. It's not as completely perfectly put together as The Westing Game, but it has a similar wit, a cleverly humorous sensibility, an enormous heart, and way fewer characters. For a very long time, The Tattooed Potato was my favorite Raskin title. It was also very hard to come by. But it was reprinted in 2011 and is now available in paperback and e-book formats. Hooray for modern publishing!