Accessibility links
Burned Out By Dating Apps? 'The Right Swipe' Will Relight Your Fire Alisha Rai's new romance is a testament to the difficulty of modern dating, as the CEO of a successful dating app realizes she's been ghosted by the celebrity spokesman of her biggest business rival. 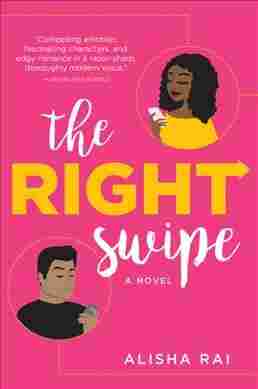 If you've braved the dumpster fires of dating apps and come out on the other side a little singed, this feminist-as-hell, emotional whopper of a romance was written especially for you.

The Right Swipe is a testament to the difficulties of modern dating — from ghosting to unsolicited photos. If your "Tinder thumb" has gone numb, or you feel the familiar creep of romantic insecurity, certain you'll die alone, Alisha Rai will make you believe in love again.

Professionally, Rhiannon "Rhi" Hunter is at the top of her game. Her dating app, Crush, has nearly 30 million subscribers, she's a key speaker at a notable tech conference, and one of her competitors is poised for a buyout — of which she plans to take full advantage. Crush has tons of success stories, from engagements to babies, but Rhi's love life isn't one of them. Her career was nearly halted after a whisper campaign smeared her as a gold digger sleeping her way up the corporate ladder. Rhi was humiliated. "The world had decided long ago what a sweet, kind, and loyal woman looked like," she says at one point, "and it wasn't her."

So yes, Rhi has enough baggage to stock a Samsonite outlet. Now, in her mid-30s and on the verge of incomparable success for a woman of color in Silicon Valley, she can't afford to be distracted by a hunky Samoan former football player.

Even if he did give her the time of her life ... and then ghosted her for a second date.

Samson Lima comes from a football dynasty; both his dad and uncle are Hall of Famers, though his own time in the sport has been bittersweet. And after a series of family tragedies, Samson finds himself helping with his aunt's struggling business — which just happens to be Matchmaker, a Web-based matchmaking platform known for its detailed questionnaires. As the new face of Matchmaker — and its most famous customer — Sampson hopes to rejuvenate the site. But complications arise when he realizes his unforgettable one-night stand was with the CEO of Matchmaker's top competitors — and he had definitely stood her up.

Refreshing is the best word for The Right Swipe. As someone with my own treasure trove of dating app stories (and someone who is now in a long-term relationship thanks to Tinder), reading about Rhi's experiences felt like looking into a mirror. Devastated by the end of her last serious relationship, Rhi avoids forming any permanent attachments. It's just easier for her to be accountable to herself and herself only — but the pangs of loneliness she feels while trying to fill that void with work are personal and universal. The book hits so close to home, it's hard to read at times.

Community and family ties are essential to Rhi and Samson's romance. Rhi surrounds herself with positive, wonderful people, reinforcing the power of healthy friendships and underlining what can be accomplished when women support other women. We all need friends who can give us a good shake when we need it — or recognize we need a moment of silence, and a piece of comfortingly fatty, carby avocado toast.

But familial obligation is a double-edged sword for Samson. His family's legacy of football fame doesn't look as good in light of all the recent revelations about how damaging concussions can be to athletes. Samson is doing everything he can to contribute to research into frequent brain injuries, but that earns him opponents who think he's harming the sport. Meanwhile, his love for his aunt moves him to take on the role as spokesman for Matchmaker — but even that is jeopardized by Rhi's reappearance in his life.

Rai writes emotionally fluent angst like no one else.

Rai writes emotionally fluent angst like no one else. Feeling vulnerable and powerless and afraid of rejection existed way before people began swiping left and right, and technology has only heightened these feelings, turning our love lives into a sort of game. Or even worse, a way to while away time in the bathroom. But for Samson and Rhi, the risk is worth the reward — even though it takes time and patience to get to their happy-ever-after.

Brilliantly self-aware — seriously, I cringed seeing some of my own dating faux pas on the page — and filled with a raw tenderness that'll have you reaching for the nearest box of wine, The Right Swipe is an unflinching look at what it takes to find love in the 21st century.

Amanda Diehl is a romance reviewer and contributor for Smart Bitches, Trashy Books and Book Riot and too many other places to list. Follow her on Twitter at @_ImAnAdult.