Accessibility links
El Paso Shooting: 8chan Website Dropped By Security Firm After Attack "At some level firing 8chan as a customer is easy," Cloudflare CEO Matthew Prince said. Before the Texas shooting, the suspect is believed to have posted a white nationalist, anti-Hispanic screed. 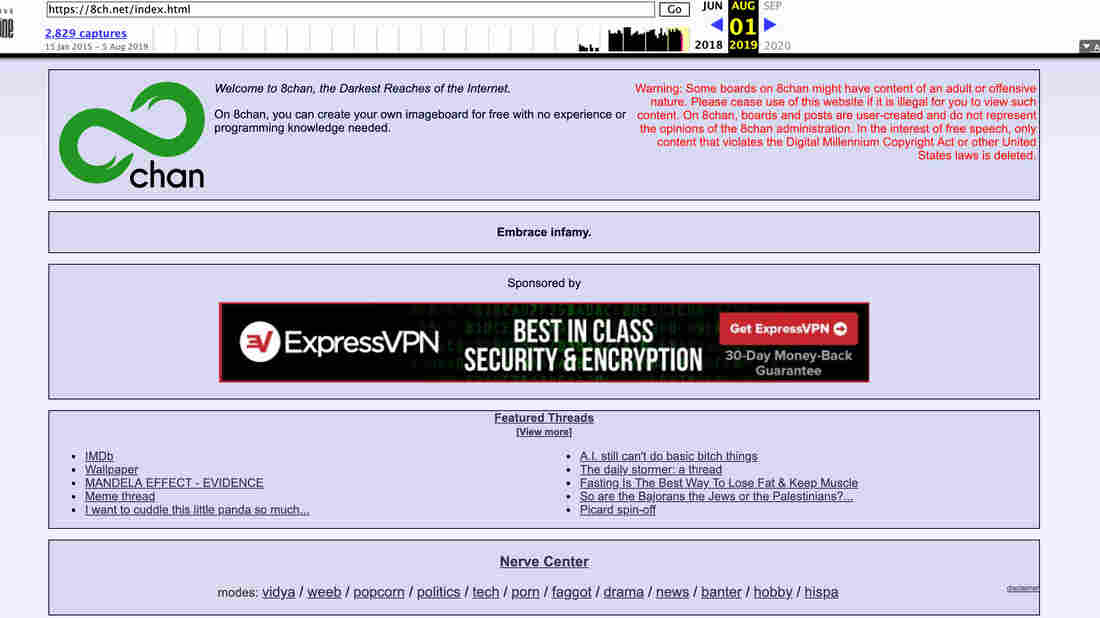 An archived screenshot of 8chan, an online message board that shooters have used to post messages before their attacks, describes itself as "the darkest reaches of the Internet." Wayback Machine/Screenshot by NPR hide caption 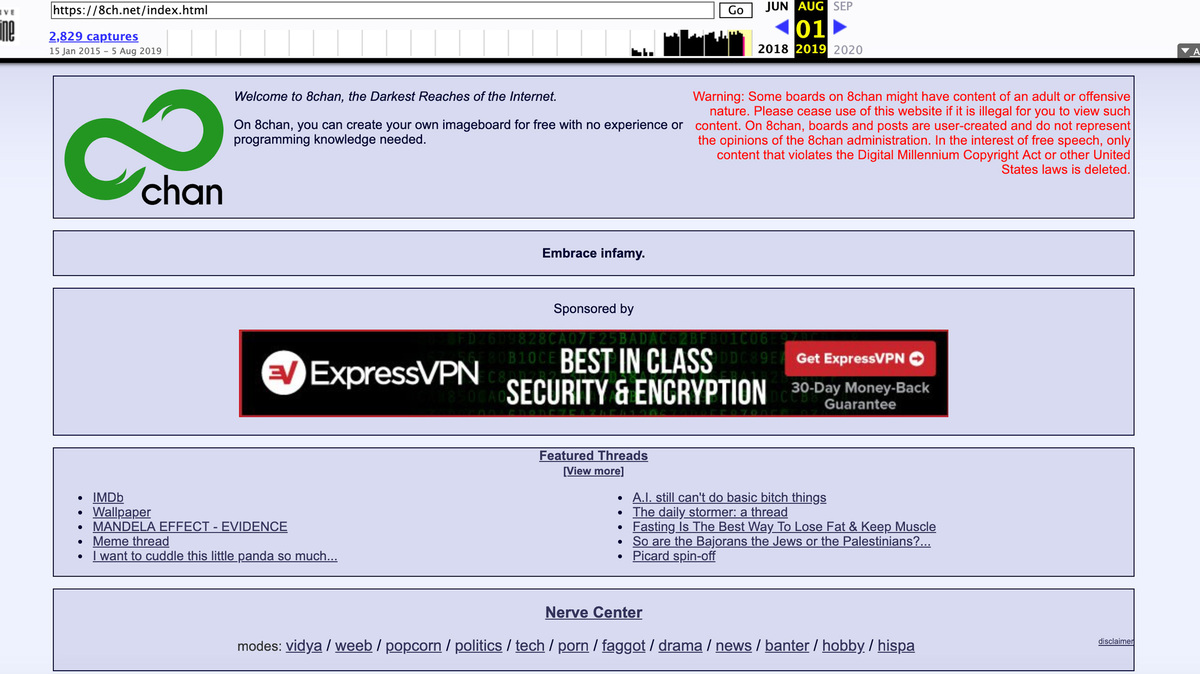 An archived screenshot of 8chan, an online message board that shooters have used to post messages before their attacks, describes itself as "the darkest reaches of the Internet."

A Web security company is dropping its protections for 8chan, a controversial online message board where people have posted hateful screeds before carrying out violent and deadly attacks.

The forum describes itself as "the darkest reaches of the Internet."

Minutes before the shooting that claimed the lives of at least 22 people in El Paso, Texas, the suspected gunman is believed to have posted a lengthy and hateful diatribe to 8chan. The post described an "invasion" of Hispanics at the southern U.S. border and an effort to "reclaim" the United States.

The forum has been linked to at least two other deadly shootings — attacks on Muslims at mosques in Christchurch, New Zealand, in March and, a month later, on Jewish people at a synagogue in Poway, Calif.

After the El Paso shooting, calls for the end of 8chan as a breeding ground for extremism grew louder.

In a statement posted early Monday morning, Web security company Cloudflare called 8chan "a cesspool of hate" and announced it would stop shielding the site from cyberattacks. "At some level firing 8chan as a customer is easy," CEO Matthew Prince said. "They are uniquely lawless and that lawlessness has contributed to multiple horrific tragedies. Enough is enough."

Just hours earlier, Cloudflare's general counsel had told BuzzFeed News that taking such an action would set a dangerous precedent, saying "scratching an itch in a situation like this is very problematic."

Prince said the move by San Francisco-based Cloudflare would disrupt 8chan but "almost certainly" not erase its presence from the Internet because other companies could step in to fill the void.

Some experts suggest that trying to cut off 8chan is like trying to kill a hydra — the decentralized community could just grow back under a different name. "If 8chan is shut down here is what will happen: someone else will spin up a new imageboard, say 20chan or whatever. People will flock to that," Andrew Torba, the controversial founder of social network Gab, told BuzzFeed.

On Monday morning, 8chan was online only sporadically. As of 2:45 p.m. ET, it was offline.

On Twitter, the 8chan account remains active, along with its administrators' accounts. And at least one associated Facebook page continued to be available. Neither social media platform immediately responded to NPR's request for comment.

"There might be some downtime in the next 24-48 hours while we find a solution," 8chan said on Twitter. Being dropped by Cloudflare would affect email "so timely compliance with law enforcement requests may be affected," the website said.

One of the site's administrators announced that 8chan would turn to BitMitigate, a security firm that describes itself as a "non discriminatory provider" that operates "in the fullest consistency to free speech."

The company did not immediately respond to NPR's request for comment.

In 2017, BitMitigate gained notoriety for protecting neo-Nazi site The Daily Stormer after the Unite the Right rally in Charlottesville, Va. A self-proclaimed neo-Nazi killed 32-year-old Heather Heyer when he rammed his car into a crowd of counterprotesters. (Cloudflare terminated its relationship with The Daily Stormer days after that attack.)

To be able to stay online, a website must work with an array of other businesses, including a domain registrar, which handles the registration and management of Internet domain names.

According to a WhoIs report, 8chan is now using Epik as its new domain registrar. Epik, a Washington state-based company, "is cornering the market on websites where hate speech is thriving" by embracing groups that were banned online, the Southern Poverty Law Center says.

Epik founder and CEO Rob Monster told NPR in a statement that the company fills an "ever growing need for a neutral service provider" because censorship across major social media platforms has created a vacuum.

"We have also not made a definitive decision about whether to provide [cyberattack] mitigation or Content Delivery services for them," it read. "We will evaluate this in the coming days."

"From what little we know so far, the Chans are not lawless," the statement continued. "Ultimately, we believe that 'sunlight is the best disinfectant' and that exposing hateful ideas is necessary if they are to be defeated. However this must absolutely occur within the bounds of the law."

Shortly after the El Paso attack, 8chan switched to Epik from Canadian-based domain registrar Tucows, according to Graeme Bunton, Tucows' manager of public policy. Bunton told NPR that the company was working "closely with law enforcement in our discussions around what to do with that domain" when sometime on Sunday night or Monday morning, 8chan chose to transfer to another registrar.

"We are certainly not at all sad to have them off our platform," Bunton said.

Robert Evans, a journalist who studies extremism on the Internet, says white extremism is increasing in large part because of the hate-filled writings posted to 8chan. "If you shotgun these manifestos out in front of tens of thousands of readers several times a year, somebody will take the bait and that's the game they're playing," Evans told NPR's Aarti Shahani.

"If 8chan was an Islamic extremist gathering place on the Internet, it would not be around anymore," Evans added.

William Braniff, who leads the National Consortium for the Study of Terrorism and Responses to Terrorism at the University of Maryland, told NPR's Hannah Allam that a copycat effect is already in play. The diatribe posted minutes before the El Paso attack references the attack in Christchurch that killed dozens of people.

"This gives individuals the ability to feel like they can become not just a foot soldier," Braniff said, but "someone who will be referenced by the next individual."

The 8chan site has about 15 million visitors each month, according to SimilarWeb. The forum was created in 2013 by computer programmer Fredrick Brennan as a place where uncensored speech could thrive. It was a spinoff from 4chan, a popular site for gamers that Brennan thought had become too heavily moderated. But Brennan later walked away from 8chan, saying some of the content on the site had become toxic.

He also criticized Jim and Ron Watkins — the father-and-son team currently running the site — and thanked Cloudflare for ending its ties to 8chan. "Finally this nightmare might have an end," Brennan said on Twitter.

Thank you so much @CloudFlare. Finally this nightmare might have an end. I just want to go back to making my fonts in peace and not have to worry about getting phone calls from CNN/New York Times every time a mass shooting happens. They could have prevented this and chose not to.

The site has gained the reputation of being a magnet for fringe and extremist groups, including white nationalists, "incels" (a subculture of misogynistic men who say they are involuntarily celibate), and subscribers to QAnon, a conspiracy theory that the "deep state" is working against President Trump. The forum also reportedly hosted child pornography.

On Sunday, President Trump ordered the flags at the White House to be lowered for the victims of the El Paso shooting as well as victims of the mass shooting that rocked Dayton, Ohio.

He addressed the nation on Monday, saying, "Mental illness and hatred pull the trigger, not the gun."

But experts who study extremism on the Internet say political leaders need to stop looking for excuses. Harvard fellow Brittan Heller told NPR that McCarthy's explanation was "a cop-out." "I think as Americans we should demand better," Heller said.

State prosecutors announced Sunday that they were treating the El Paso shooting as an incident of domestic terrorism. They will pursue the death penalty against the alleged shooter, Patrick Crusius of Allen, Texas.