Accessibility links
Even A Grammar Geezer Like Me Can Get Used To Gender Neutral Pron For anyone struggling to use "they" as a singular pronoun, linguist Geoff Nunberg says: Just practice. He believes human language processing capacity is far more adaptable than people realize. 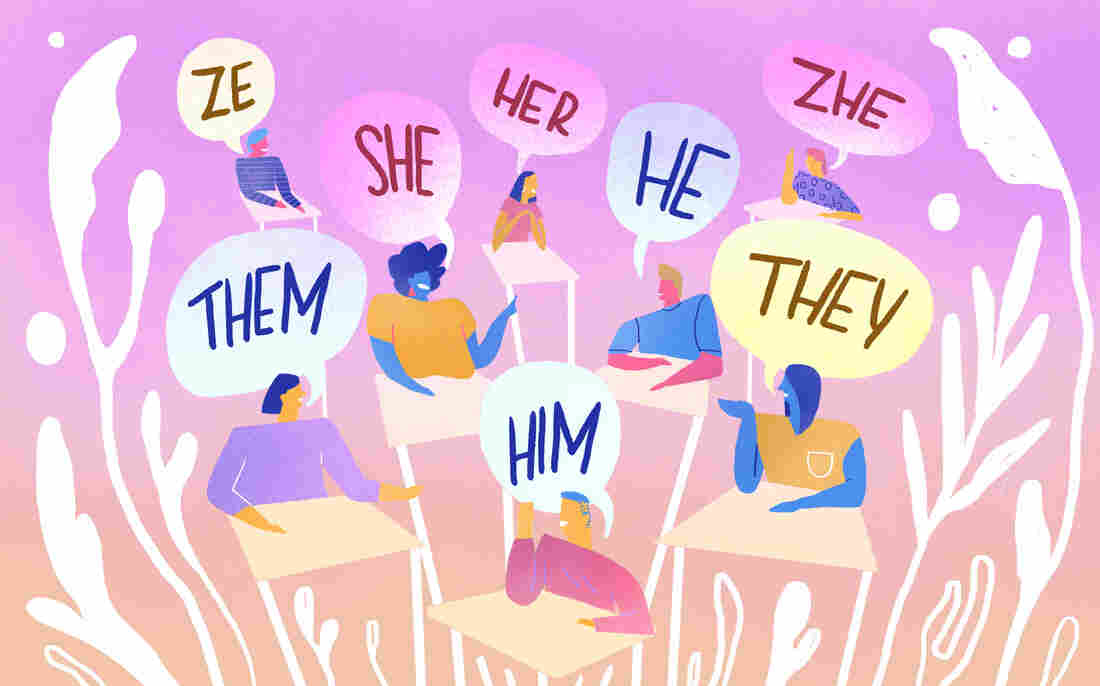 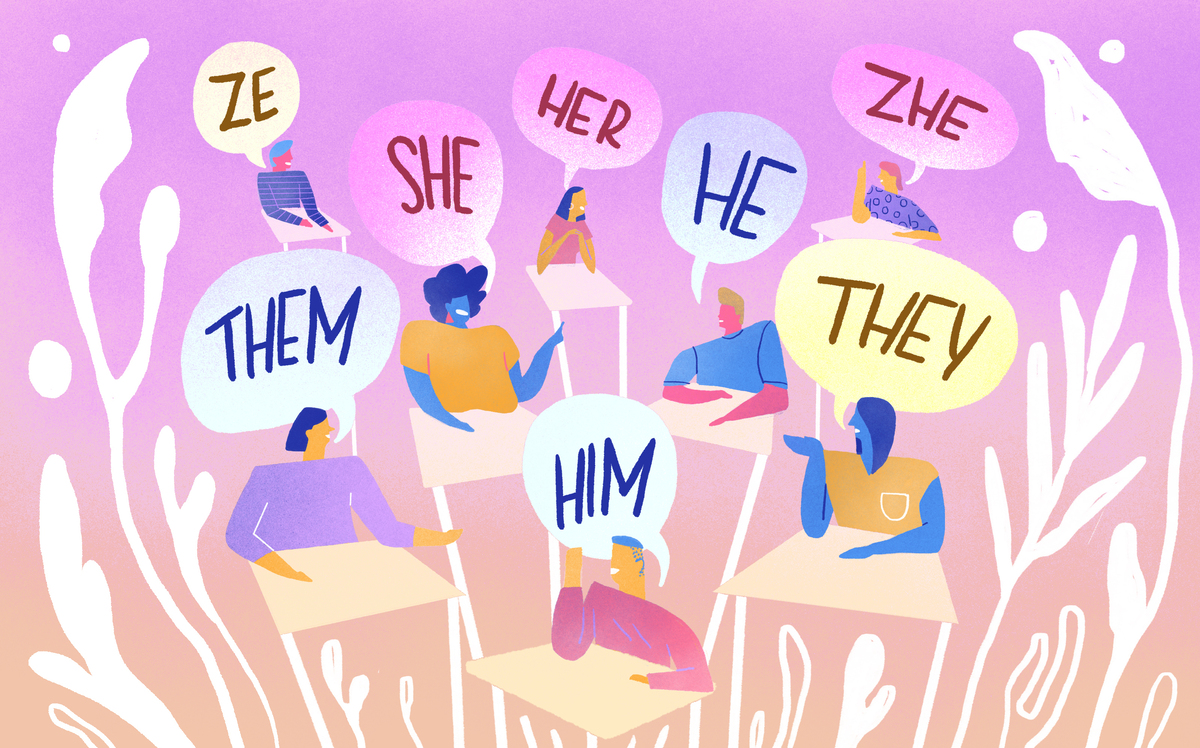 Letter-for-letter, no part of speech gets people more worked up than pronouns do. Linguistic history is dotted with eruptions of pronoun rage. Right now, the provocation is the gender-neutral pronouns that some nonbinary people have asked to be called by, so that they won't have to be identified as "he" or "she."

There are several of these in circulation. Some are new words, like "ze" and "co," but some go back a ways — in fact, people have been proposing new gender-neutral pronouns for 150 years, though none has ever caught on. But the most popular choice, and probably the most controversial one, is the familiar pronoun that people describe as the singular "they."

You can see why people would pick "they." In everyday speech we often use that pronoun for a single person, though only when the word or phrase it substitutes for — its antecedent, as it's called — doesn't refer to a specific individual. So we say, "Somebody lost their wallet," or, "If a student fails, they have to retake the course." Or the person we're referring to may be simply unknown. Your daughter's cell phone rings at the dinner table; you say, "Tell them you'll call them back." Male or female, one caller or several? The pronoun "they" is like, "whatever."

That singular "they" goes back hundreds of years. Jane Austen's novels are bristling with sentences like "No one can ever be in love more than once in their life." But that use of the pronoun fell into disrepute in the 19th century, when grammarians condemned it as incorrect and proclaimed that the so-called generic "he" should be used instead. The idea is that when you write, "Every singer has his range," the pronoun "his" refers to both men and women — or as they sometimes put it, "the masculine embraces the feminine."

When second-wave feminists protested in the 1970s that the generic "he" was sexist, they roused a storm of indignation. They were accused of emasculating and neutering the language. The chairman of the Harvard Linguistics Department charged that they were suffering from "pronoun envy." William Safire warned that to accept the use of "they" in place of "he" would be to "cave in to the radic-lib forces of usage permissiveness."

In retrospect, those reactions betrayed the obtuseness that the psychologist Cordelia Fine calls "delusions of gender." The fact is that the pronoun "he" is never gender-neutral. If Sting had sung, "If you love somebody, set him free," it would have brought only a male to mind. What the language required was "set them free."

The gender-neutral singular "they" has history, English grammar and gender equity on its side, and it's gradually been restored to the written language. Schoolroom crotchets can be hard to let go of. But we've largely leveled the linguistic playing field — at least, "he" no longer takes precedence over "she."

But that didn't make any provision for the rainbow of nonbinary and nonconforming gender identities that have risen into public awareness in recent years. The language still required us to choose between "he" and "she" to refer to a specific individual. The singular "they" initially sounded awkward here. We can say, "Somebody named Sandy was brushing their hair" where the pronoun replaces the nonspecific "somebody" — that's been standard colloquial English for centuries. But when someone says just, "Sandy was brushing their hair," you're brought up short. Your first thought is that "they" must refer to some group of people whose hair Sandy was brushing.

Tweak your internal grammar so that the pronoun 'they' can refer to a specific individual. It takes some practice to get the hang of it, but the human language processing capacity is more adaptable than people realize, even for geezers like me.

But you can make this work if you tweak your internal grammar so that the pronoun "they" can refer to a specific individual. It takes some practice to get the hang of it, but the human language processing capacity is more adaptable than people realize, even for geezers like me. As I read through an article about a nonbinary person who uses "they," "them" and "their," the pronouns ultimately sort themselves out. In context, they're rarely ambiguous, no more than any other pronoun: "Tracy should take better care of themself"; "Pat hasn't made up their mind."

That new use of "they" has passed muster with the AP's style guide and the American Heritage Dictionary. In theory, anyone can adopt it, whatever their gender identity. But we'll still be using "he" and "she" to refer to most individuals who identify as male and female. You can introduce new gender-neutral terms without driving out the gendered ones. "Sibling" has been part of the everyday language for more than 50 years, but we can still talk about brothers and sisters. When someone says, "Taylor has a lot going for them," it's a fair bet that that's the pronoun that Taylor prefers to be called by.

It's not a lot to ask — just a small courtesy and sign of respect. In fact, the accommodations we're being asked to make to nonbinary individuals are much less far-reaching than the linguistic changes that feminists called for 50 years ago. Yet the reactions this time have been even more vehement than they were back then.

A fifth-grade teacher in Florida whose preferred pronouns are "they," "them" and "their" was removed from the classroom when some parents complained about exposing their children to the transgender lifestyle. When the diversity and inclusion office at the University of Tennessee at Knoxville published a guide to alternative pronouns in 2015, the state legislature promptly defunded the center and barred the university from promoting the use of gender-neutral pronouns in the future. Like the classic episodes of pronoun rage in earlier eras, these aren't about pronouns at all.