Accessibility links
'Our Women On The Ground' Unites Stories From Female Journalists In The Arab World There's a deep fascination in the West with how women function in ultra-conservative societies where repression can be violent and even deadly. This anthology pulls back the curtain on those places. 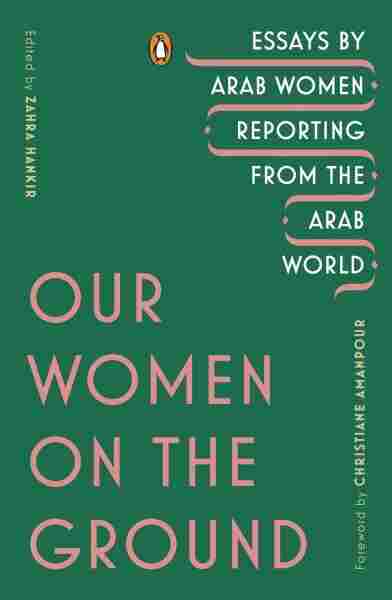 Our Women on the Ground

Essays by Arab Women Reporting from the Arab World

by Zahra Hankir and Christiane Amanpour

Our Women on the Ground takes readers to places few dare to go, like the eastern Aleppo home of Zaina Erhaim. The Syrian journalist's prized possession is her video camera, and she urges a friend to bring it to her at the hospital should her building be bombed and reduced to rubble.

She writes: "My camera, my passport, and I live or die together."

Erhaim is one of the essayists in the ground-breaking anthology that should fascinate any fan of the stories behind the stories that come out of war zones. I'm definitely one of those people and find refreshing (and long overdue) a book packed with insights from women journalists linked by language and heritage to the complex Arab world.

One reason is that I, too, am a former Middle East correspondent and polyglot with family and cultural ties to countries I've covered for NPR, Knight Ridder Newspapers and the Los Angeles Times. But I'm hardly alone in appreciating the value of story telling by journalists who don't need interpreters to explain what is being said and why it's relevant or how it fits into the bigger picture. Never mind that a woman journalist in a region prone to segregating women from men has access to half the population that her male counterparts do not.

We women who are "ethnic journalists" are still a relatively small group, especially at the upper echelons of our profession. So it's important for me to disclose that I am friends with two of the essayists who are fellow NPR correspondents: Hannah Allam and Jane Arraf. (I'm also close to one of the blurb writers, author Azadeh Moaveni. We were the first two American journalists to set foot into the former U.S. Embassy in Tehran after the Islamic Republic transformed it into the "Den of Spies" propaganda museum).

But connections notwithstanding, I believe Our Women on the Ground will appeal to readers of all genders and backgrounds who want to broaden their understanding of the Arab world. The anthology includes essays by 19 sahafiyat — Arabic for female journalists — most of them recounting their experiences, including sexual assault, and analysis of their and other women's life and work in dangerous or oppressive countries in the Middle East and North Africa.

The collection's editor, Zahra Hankir, also gives voice to a 20th Arab woman who was not a traditional journalist — Ruqia Hasan. Her vivid Facebook posts about ISIS atrocities in Raqqa where she lived ultimately cost the young Syrian Kurdish woman her life.

The book is divided into five sections: Remembrances; Crossfire; Resilience; Exile and Transition. I chose not to read them in order and don't feel I lost anything by skipping around so I could read essays by writers I was familiar with first.

Some of the essays were gut-wrenching, like the one by Nada Bakri, the widow of New York Times correspondent Anthony Shadid. (I had met him during one of his Cairo reporting trips, but not her). Her painful prose details the struggle to accept her husband's death during a clandestine reporting trip to Syria in 2012, as well as the anxiety of being a dual-reporter couple trying to excel at work and raise a child in a region where there is little sympathy for women stepping out of society's prescribed roles.

Yemeni freelance photographer Amira Al-Sharif, who documents the lives of women and girls in her war-ravaged country, offers a lighter perspective on the sacrifices she has had to make to practice her unconventional profession. The daughter of an imam, or Muslim preacher, she observes: "Today at thirty-five, I don't have a husband, but I do have a camera."

In "An Orange Bra in Riyadh" Donna Abu-Nasr exposes the indignities of the gender divide through one of its most absurd manifestations: the difficulties women face buying undergarments in Saudi Arabia, where they're forced to cover up completely — even in the lingerie department. But Abu-Nasr, who is Bloomberg's Saudi Arabia bureau chief, is no lightweight and, despite the obstacles faced by women reporting in the kingdom, she ended up with a major 9/11 scoop — official confirmation by Riyadh that 15 of the 19 hijackers aboard the planes that struck the Twin Towers were Saudi citizens.

Hankir says her goal in creating this collection was to amplify the voices of women trying to shape and document Arab history, "without projecting themes of women's issues and patriarchy onto them." She succeeds at the former, but I don't see how one avoids the latter.

There's a deep fascination in the West with how women function in ultra-conservative societies where repression can be violent and even deadly. This anthology pulls back the curtain on those places, while connecting readers to brave and incisive female journalists who help us better understand the Arab world.

Their often harrowing experiences and insights make for a compelling read. I, for one, hope to read more anthologies from female journalists in other parts of the world, including the United States.