Accessibility links
U.S.-China Trade War Spreads From Tariffs To A Battle Over Currencies China's currency and the U.S. stock market stabilized Tuesday, after a dramatic drop the day before. Experts say the Trump administration was wrong to accuse China of currency manipulation. 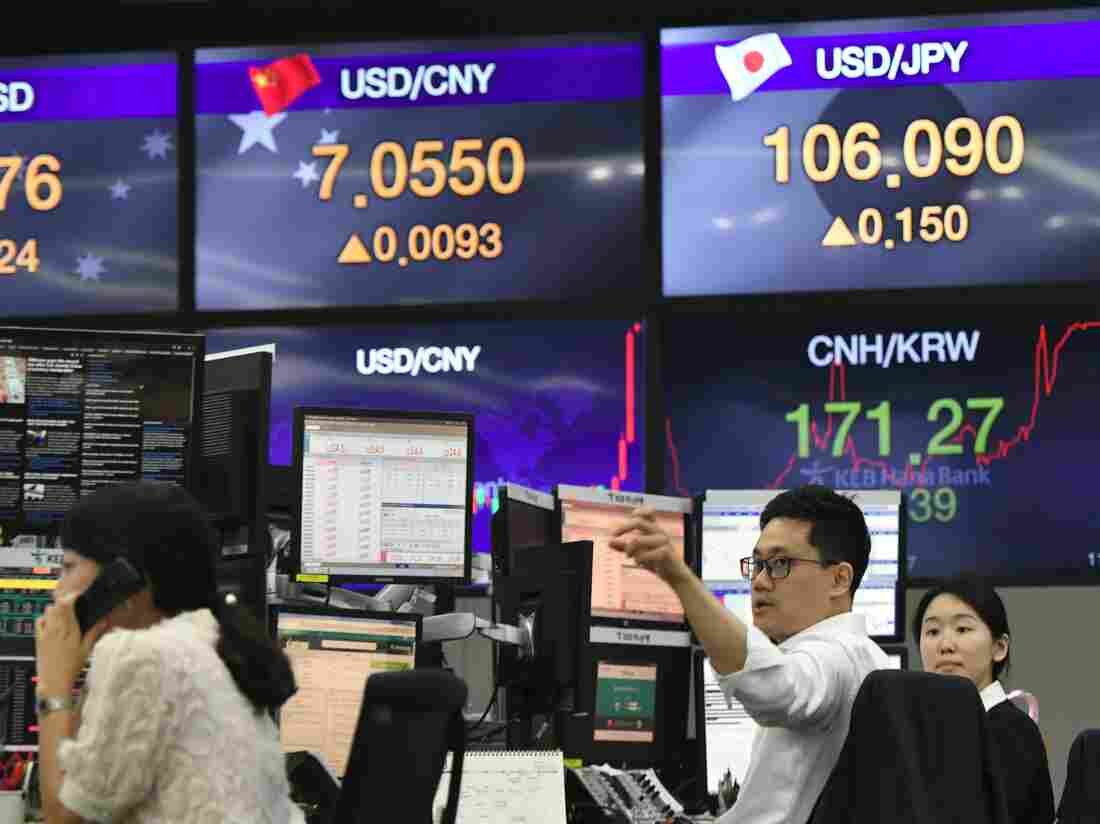 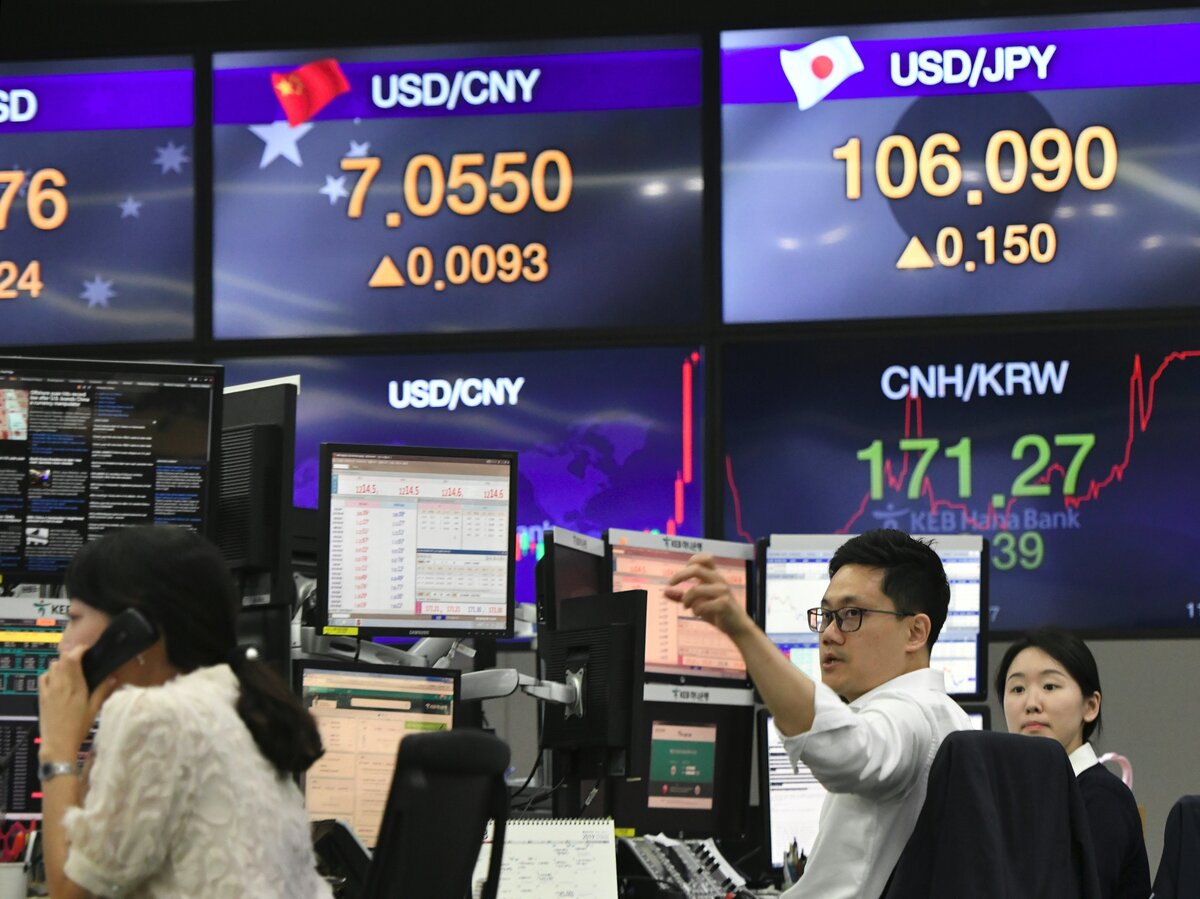 Currency dealers monitor exchange rates at the KEB Hana Bank in Seoul, South Korea. China's currency and the U.S. stock market stabilized Tuesday, after a dramatic drop the day before.

The U.S. and China opened a new front in their trade war this week, when China allowed its currency to fall, triggering a sharp drop in the U.S. stock market.

The seemingly modest adjustment in global exchange rates had a seismic effect on Wall Street confidence, rattling retirement accounts and prompting a new round of bellicose rhetoric from President Trump.

Both the market and the currency stabilized on Tuesday, but not before investors got a stomach-churning preview of what an escalating trade war might look like.

The U.S. Treasury Department formally accused China of manipulating its currency, echoing a complaint the president had made via Twitter. But experts say China's actions do not amount to currency manipulation, and they warned that Treasury Secretary Steven Mnuchin is squandering credibility that the U.S. might need in the future.

"Currency manipulation has a very specific definition under U.S. law," said David Dollar, a former official with the Treasury Department and the World Bank. "China does not meet the standard."

Although China does have a trade surplus with the U.S., it does not meet two other Treasury Department tests for currency manipulation, analysts said: It doesn't have a large surplus in its broader "current account," and it hasn't made persistent, one-sided moves to interfere in currency markets.

Dollar, who is now with the Brookings Institution, says currency manipulation usually describes a country that is keeping its currency artificially low, in an effort to make its exports more affordable or to discourage imports.

If anything, China had been propping up its currency until this week. That's when the government allowed market forces to take over and the Chinese yuan fell below 7 to the U.S. dollar for the first time in over a decade.

"The move down in the yuan on Monday was not artificial — it was an entirely natural market response to newly imposed U.S. tariffs," wrote former Treasury Secretary Larry Summers in an op-ed for the The Washington Post. Last week, Trump sent a shock through financial markets with plans for a new 10% tariff on $300 billion worth of products imported from China — in addition to previously announced import taxes.

Mnuchin "has damaged his credibility and that of his office" by declaring China a currency manipulator, wrote Summers, who was Treasury secretary in the Clinton administration and an economic adviser to former President Barack Obama. "It will be harder now in the next difficult financial moment for Treasury Department pronouncements to be credited by market participants."

The Treasury Department said it would consult with the International Monetary Fund about China's falling currency, but observers said they did not expect much practical effect.

"It's meaningless," said Daniel Ikenson, director of the Center for Trade Policy Studies at the libertarian Cato Institute. "We're already in a trade war with China. We're already imposing all sorts of punitive measures. So just calling them a 'currency manipulator' is more political and it is an exercise in name-calling."

The Chinese yuan stopped its slide on Tuesday, and U.S. investors appeared to catch their breath. Stocks regained some of the ground they lost the day before. U.S. stock indexes rose more than 1% on Tuesday, with the Dow Jones Industrial Average closing up 311 points.

Still, the market gyrations only add to the uncertainties that have led to a slowdown in U.S. manufacturing and business investment.

"The president's flailing bluster, in which the treasury secretary is now a full participant, risks real economic damage as businesses and consumers become fearful and hold off spending," Summers wrote. "The risk of recession going forward might now be as high as any time since the 2008 financial crisis."

"The reality is we would like to negotiate," Kudlow said. "The president has said if you make a good deal, maybe he'll be flexible on the tariffs."

"It would only take a phone call between the two presidents to put things back on a good track," he said. "They could just decide this [trade war] is mutually destructive."

But Trump's tweets showed little sign that he is backing down on his tariff threats.

"Massive amounts of money from China and other parts of the world is pouring into the United States for reasons of safety, investment, and interest rates," he wrote Tuesday.

However, as nervous investors seek safety in dollars, that merely strengthens the U.S. currency — encouraging imports and making American exports more expensive. That's precisely the opposite result of what the president says he wants.

"His protectionist policies are driving down the value of the Chinese currency and driving up the value of the dollar. And that's just going to encourage trade deficits in perpetuity," the Cato Institute's Ikenson said. "If we want the dollar to settle down, we need to have more predictable, level-headed policies in place going forward."