Accessibility links
Ohio Governor Proposes New Gun Control Laws, Marking Shift From Past GOP Leadership Ohio's Republican governor is proposing new gun control laws in response to the deadly mass killings in Dayton. This would be a big change for the Ohio GOP if he gets his way. 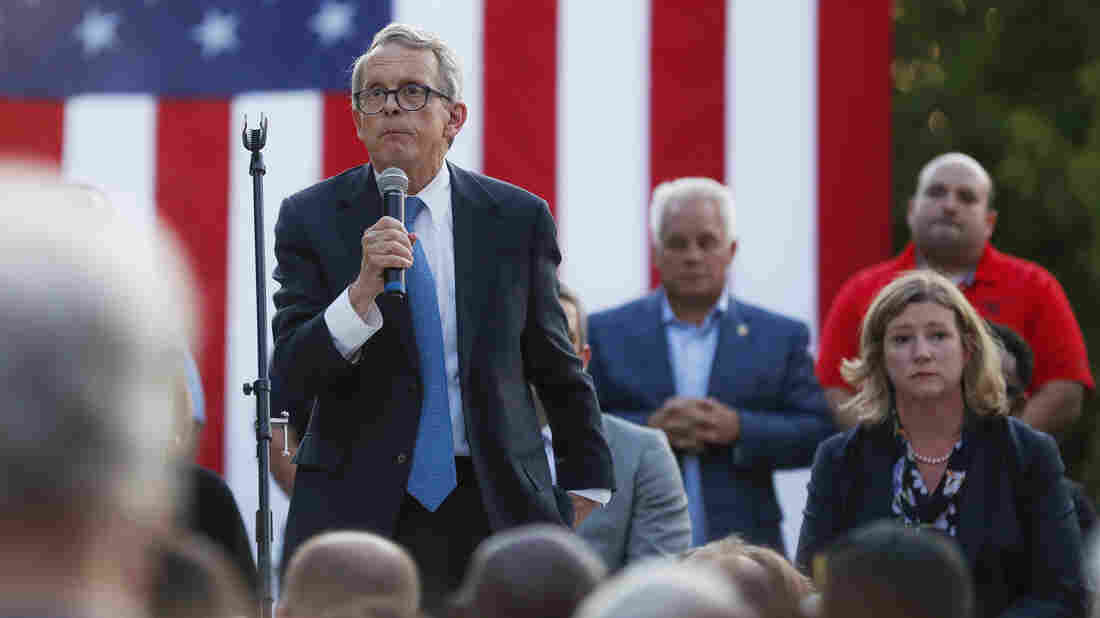 Ohio Gov. Mike DeWine (left) spoke alongside Dayton Mayor Nan Whaley during a vigil at the scene of a mass shooting in that city on Sunday. John Minchillo/AP hide caption 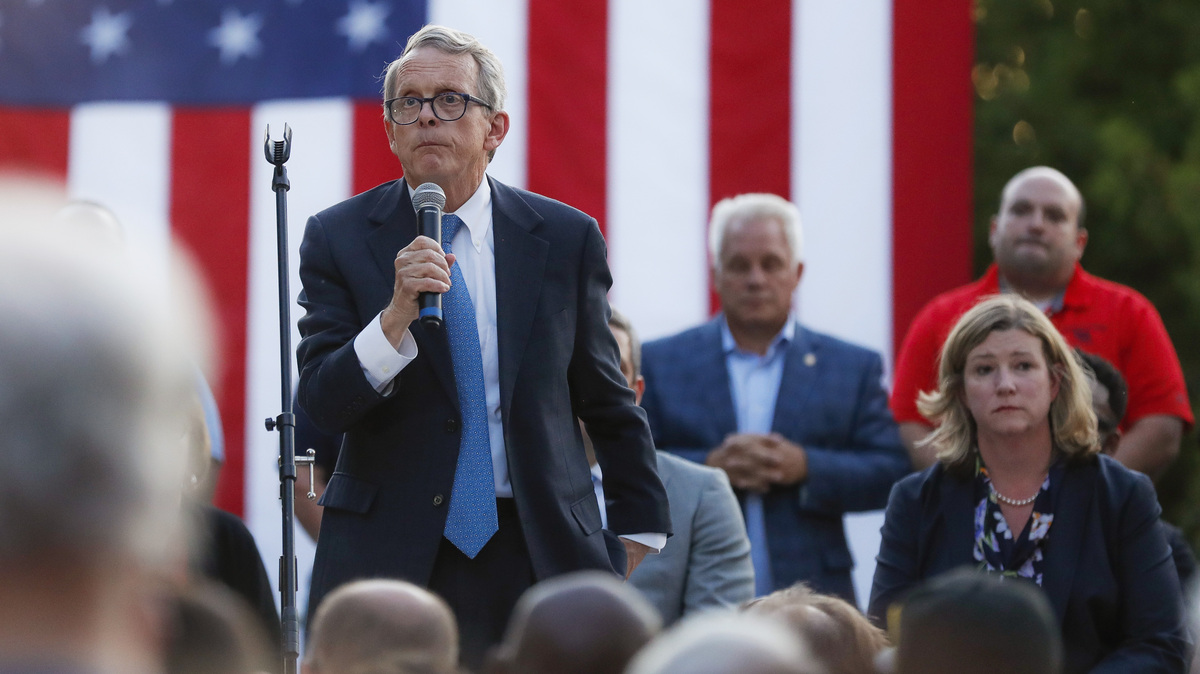 Ohio Gov. Mike DeWine (left) spoke alongside Dayton Mayor Nan Whaley during a vigil at the scene of a mass shooting in that city on Sunday.

Gov. Mike DeWine, R-Ohio, is calling for a version of the "red flag" law, expanded background checks, and other gun control proposals in response to the mass shooting in Dayton over the weekend that left nine people dead. These proposals represent a dramatic shift in the way Ohio's state leadership has handled gun policies for most of the decade.

As DeWine rolled out his 17-point plan to reduce gun violence, he reflected on Sunday night's vigil for the Dayton shooting victims. During his address people started chanting "Do something," which eventually drowned out the rest of his remarks.

"I understand that anger, for it's impossible to make sense out of what is senseless," DeWine said during a news conference Tuesday morning. "Some chanted 'do something' and they were absolutely right."

DeWine says he is introducing a "safety protection order" that reflects what many other states call the red flag law. This allows a judge to confiscate firearms from people who pose a threat to themselves or others. His plan would also require background checks for all gun purchases and transfers with some exemptions, strengthen penalties on crimes involving guns, and increase access to mental health treatment.

Since 2011, Republicans have controlled the Ohio House, Ohio Senate and Ohio governor's office, with little to no interest in passing strong gun regulations. The exception is former Gov. John Kasich's late-term change of heart to pass gun regulations during his last year in office.

This has been met with great frustration by State Sen. Cecil Thomas, D-Cincinnati, and other Democrats who have spent years introducing bills that reflect what DeWine is calling for now.

"Republicans [need] to step up; they've got to do some self-evaluation of their values. You know people are dying, people are suffering from all of this," says Thomas.

State Sen. Peggy Lehner, R-Kettering, says she will no longer be timid in expressing her support for "common sense" regulation.

"To put a gun in the hands of someone who is mentally ill and has ill will towards other people is not protecting our constitutional rights — it's just plain foolish, it's stupid," says Lehner.

"The fact is, results count. You can't have an unconstitutional law or an ineffective law passed because it does nothing to protect the public. If it's more important to score political points just to pass a law and pat yourself on the back, you're dishonoring the dead," Fortney says.

"He can call that pig what he wants to, he can put as much lipstick on it, but a safety protection order is still a red flag order. You're still not convicted of a crime," Dorr says.

While Dorr believes DeWine goes too far, there are gun control advocates who are pushing for even more, such as a ban on assault-style weapons and high-capacity magazines.

The group Ohioans for Gun Safety is circulating a petition to put expanded background checks on the state ballot as early as November 2020. Voters could decide the issue if the Ohio Legislature doesn't act.