Accessibility links
Big Chill With China Takes Its Toll On Flow Of Money, People And Ideas As tensions deepen, the flow of tourists, students, researchers and entrepreneurs has slowed between the U.S. and China.

Big Chill With China Takes Its Toll On Flow Of Money, People And Ideas

Big Chill With China Takes Its Toll On Flow Of Money, People And Ideas 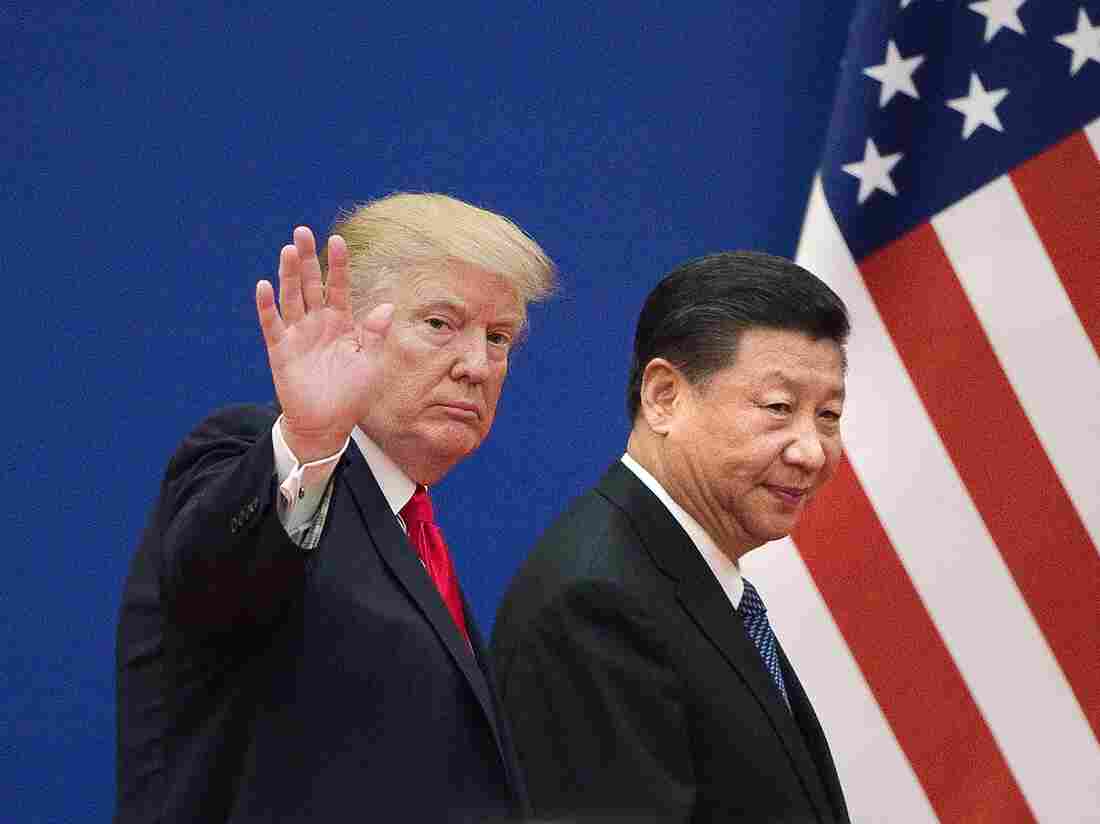 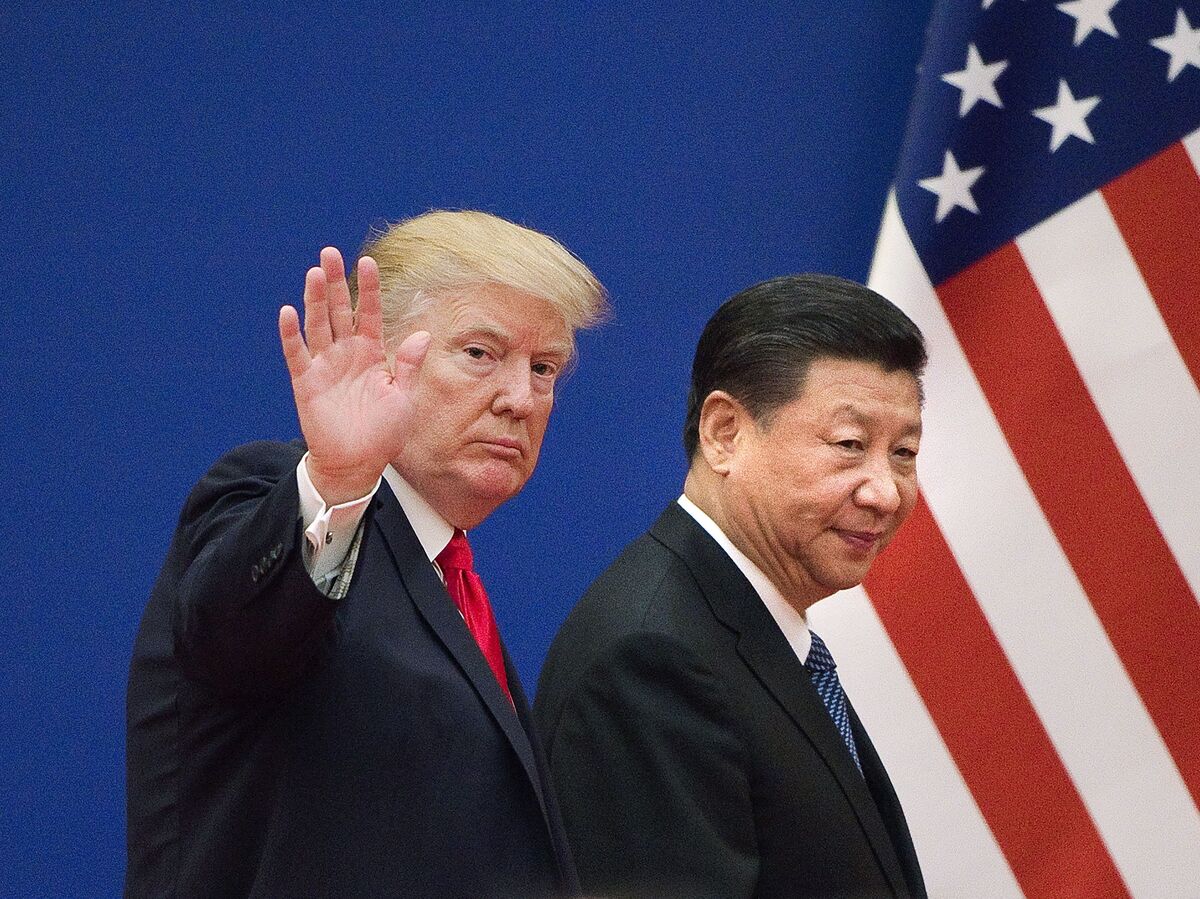 President Trump and China's leader Xi Jinping leave a business leaders event in Beijing in 2017. Relations involving trade and other areas between the two countries have deteriorated.

In 1978, President Jimmy Carter received a late-night call from Beijing. It was from his science adviser saying Chinese leader Deng Xiaoping wanted to send 5,000 students to the United States. "Tell him to send 100,000," Carter recalls parrying back.

In the next three decades, the United States and China built up the largest trade relationship in the world, along with an acceleration of immigration, investment and academic collaborations between the two.

Now, U.S.-China exchanges through trade, travel and technology are quickly fraying. Higher tariffs are discouraging investment on both sides, while stricter export controls and commercial sanctions are driving Chinese buyers away from American technology products. That decoupling is also affecting the flow of people as well — the hundreds of thousands of American and Chinese students, researchers and entrepreneurs who routinely traverse the ocean between both countries.

The disentanglement comes as President Trump and China's leader Xi Jinping deepen their trade fight with another round of talks ending in no deal last week. In response, Trump tweeted last Thursday that additional tariffs of 10% on a remaining $300 billion in Chinese goods would be levied Sept. 1. On Monday, China's central bank allowed the yuan to weaken against the dollar, making Chinese exports cheaper and thus more attractive to foreign buyers. That prompted the Treasury Department to label China a "currency manipulator." Hours later, China declared it would stop buying agricultural products from the U.S.

The bilateral relationship that once reshaped local economies on both sides, drove cutting-edge research and shaped America's best universities is deteriorating.

The decline is starkly reflected in overall Chinese investment and acquisitions in the U.S. that totaled $2 billion last year, a staggering 95% drop from the $45.6 billion poured in at its peak in 2016, according to the Rhodium Group, an independent research firm.

Beijing's restrictions on money leaving its borders and an aggressive regulatory effort to rein in excessive spending have contributed to the pared-down figures. But the sudden drop in investment is also largely due to a strengthened Committee on Foreign Investment in the United States, known as CFIUS, an interagency body that screens and often vetoes foreign deal-making on national security grounds.

"The investment has just crumbled in the last two years," says Reid Whitten, a lawyer who has had several Chinese clients withdraw from deals in the U.S. He says Chinese companies now regularly request clawback agreements to ensure costs accrued while negotiating a deal can be recouped if the deal falls through because of CFIUS scrutiny. "When you have an investment from China, it is much more likely to get scrutiny from the committee than investments from other places," Whitten says.

Silicon Valley has been particularly hard hit after foreign venture capital funding fell under the scope of CFIUS scrutiny. For example, Chinese investment in U.S.-based electronics companies hit more than $4.2 billion in 2016. Just two years later, investment is at zero, according to the same Rhodium data.

The FBI has also warned tech executives and investors to be wary of Chinese investment and to take cybersecurity precautions when traveling to China.

"The pendulum has shifted a bit too far"

The sharp dip in money from China directly tracks an attitude shift in Washington, where a bipartisan consensus around confronting China's rise has consolidated over the past year. In the Democratic primary debates leading up to 2020's presidential election, four candidates have even named China as the biggest threat facing the U.S.

"I viewed myself as a hawk when I worked at the Pentagon, but I think the pendulum has shifted a bit too far," says Charles Blanchard, former general counsel for the U.S. Army.

Leading the ideological charge is the Committee on the Present Danger, a volunteer organization co-headed by anti-Muslim conspiracy theorist Frank Gaffney and former White House adviser Steve Bannon. It sees China as an existential threat to the U.S. A revival of a Cold War-era bulwark against communism, the committee has taken a strong line that engagement is akin to appeasement.

The investment has just crumbled in the last two years.

"We've tried engagement since 1972 and then I think it should have been obvious in 1989, after Tiananmen Square, that engagement really didn't work," says Anders Corr, a political analyst and committee member.

Scrutiny has fallen most heavily on nontraditional targets such as Chinese graduate students and researchers — a "whole of society" approach advocated by the U.S. intelligence establishment to match China's espionage efforts.

"They're doing it through Chinese intelligence services, through state-owned enterprises, through ostensibly private companies, through graduate students and researchers, through a variety of actors, all working on behalf of China," Christopher Wray, the FBI's director, said at the Council on Foreign Relations in April.

"It hasn't reached the levels of the McCarthy period yet, but it's sort of nosing its way in that direction and people are being intimidated in the U.S. for having connections to China," says Douglas Paal, vice president for studies at the Carnegie Endowment for International Peace and former National Security Council staff for Presidents Ronald Reagan and George H.W. Bush.

Chinese tourism to the U.S. dipped last year, the first time since 2003. The U.S. Travel Association said that the strong dollar makes travel more expensive but that the trade dispute with China could also be a factor.

Additional screening measures begun last year on Chinese graduate students studying science and technology fields with potential dual-use applications have stretched out visa wait times. Many applicants are looking to Canada and the United Kingdom for higher education, bypassing the U.S. completely. Last year, the University of Illinois at Urbana-Champaign even insured itself against an anticipated drop in Chinese enrollment and thus tuition revenue for the upcoming school year.

Visas Are The Newest Weapon In U.S.-China Rivalry

"There is a significant concern with a sense that Chinese graduate students are not welcome and that scientists, if you were not born in the United States, are not welcome," says Lizbet Boroughs, an associate vice president at the American Association of Universities, which represents research universities.

She says anxious Chinese students regularly reach out to her, including a talented college senior who decided after this spring semester to discontinue her graduate studies in the U.S because she felt unwelcome. "Losing her and similar students will ultimately be a big loss," says Boroughs.

As the flow of people peters off, the exchange of ideas on basic research from cancer treatments to curing genetic diseases will also take a hit. The National Institutes for Health has notified more than 60 universities about academics potentially failing to disclose funding from Chinese institutions and other partnerships with China. Other major federal funding agencies, including the Department of Energy and the National Science Foundation, have also begun examining research funding from China.

Academics say expanding the definition of national security to include fundamental research will have a chilling effect on the countries' research exchanges.

"It's very alarming that basic collaborations in academia are under attack," says Xiaoxing Xi, a professor at Temple University wrongly accused by the Justice Department of passing trade secrets to China in 2015. Despite having no commercial applications, basic research has now become part of the "thousand grains of sand theory," Xi explained, "a belief that if you put many unclassified documents together, they can create a classified document."

U.S.-China student exchanges are also being hit by American concerns about Chinese espionage.

Last year, when two graduates of the U.S. Military Academy at West Point were accepted into the prestigious Yenching Academy master's program, a two-year degree housed at Beijing's Peking University, the Defense Department intervened and barred them from attending over security concerns, according to two people familiar with the matter. NPR has also reported that at least five American graduates of Yenching have been approached by FBI agents in the past half-year over suspicions they were the target of Chinese intelligence efforts.

"I encourage study in China for future China specialists. It's difficult to understand a place and its people without going there," says John L. Holden, a senior director at consultancy McLarty Associates and former associate dean of the Yenching program.

Faced with an increasingly hostile U.S., China has itself adopted more stringent policies that further raise the barriers for the inbound flow of money and people from the U.S. Much like the U.S., China is mulling its own export controls to prevent emerging and dual-use Chinese technology from being used by other countries.

A protracted trade dispute has already spurred U.S. businesses to move out of China. According to a May survey by the American Chamber of Commerce, more than 40% of U.S. businesses surveyed were considering or already had relocated their manufacturing away from China, with Southeast Asia and Mexico being top destinations.

In May, China announced it would create an "unreliable entities list" covering businesses, organizations and even individuals but has yet to release more specific details. The move is meant to match the U.S.'s own entity list, which bans certain companies and organizations — notably, Huawei — from purchasing from American companies. Even without its own list, executives say China has in place a raft of informal measures to encumber American activities.

The chill between the two countries has even hit entertainment. In May, after the governments' trade talks collapsed, Chinese studios began quietly removing American actors and directors from projects and deleting references to the U.S. in scripts, according to multiple people in the film industry.

"Time and time again, the reason they gave me was they can't risk working with an American right now," Matt Knowles, an American actor frequently cast in Chinese films and commercials, tells NPR. He had roles in multiple projects, including a $75 million movie, canceled abruptly in May. "This [trade] conflict has caused an immediate silencing of the interaction between both sides. It's devastating."

The rapid deterioration in working conditions has turned the U.S. business community — once the strongest supporter of engagement with China — away from favoring a more conciliatory strategy with China.

"Since Xi Jinping came into power and created this more rigid nationalist approach inside China, that's created more doubts inside the minds of policymakers, and it also eroded the support from the business community for a nuanced approach to China," says Claire Reade, a former assistant U.S. trade representative on China affairs.

"Of course, Chinese policymakers brought this scrutiny on themselves through their efforts to squeeze out foreign investors," notes Susan Shirk, chair of the 21st Century China Center at the University of California, San Diego. But with the bipartisan consensus to contain China, she adds, "it's really hard to know where this is all headed."