Accessibility links
'In The Country Of Women' Honors The Strength And Resilience Of 6 Generations While Susan Straight reflects on far more than her own upbringing in her memoir, she brings her trademark lyricism and a significant dose of humility to these pieces of the book. 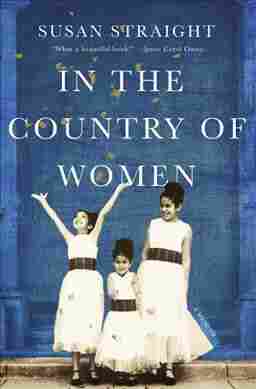 From the first words of In the Country of Women, before the first chapter, before the prologue, before even the epigraph, Susan Straight makes it clear in her author's note that she is using "memoir" in the fullest sense of the word.

The book's opening is almost an invitation to go back to the original meaning of the term, which comes to us from the Latin, memoria, by way of the Middle French, memoire, meaning memory. When Straight declares that "Memory is a sixth sense, or seventh — and so belongs in specific truth to the people who told me these stories over a span of fifty years," she's also letting us know that this is no traditional memoir. Rather than focusing on a central theme or two of her own life, the author of eight novels, two children's books, and multiple short stories and essays is far more generous. Yes, In the Country of Women is her story — but it is also a chronicle honoring the strength and resilience of six generations of women.

The book's prologue, addressed to Straight's three daughters, draws parallels to Homer's The Odyssey, observing that "they never tell us about the odysseys of women," even though "they were, like Odysseus, imprisoned and seduced and threatened with death." The women she celebrates come from an array of backgrounds, including her Swiss and Canadian ancestors and the descendants of African slaves from her husband's ancestors. They are family members who are "African-American, Mexican-American, Cherokee and Creek, Swiss, Irish and English, French and Filipino, Samoan and Haitian." They are women who had to contend with abusive systems of race- and gender-based oppression, who had to fight or flee the abusive men in their lives.

It's difficult to imagine an accounting of multiple generations that have lived in the United States, especially if those generations include people of color, that doesn't contain instances of violence. There is the brutal history of slavery and lynching and Jim Crow, including the baby born into the family during the night that white Tulsans burned and looted "Black Wall Street" in 1921. There are stories of how that violence continues to play out today, from the murder of Trayvon Martin to the execution of one of Straight's nephews, targeted by a gang because of his race. There is Straight and her childhood girlfriends who had all "been hunted for years," and her own experience with "torn clothes, hands that bruised, violating fingers, pinching and twisting of body parts," all of which she said were "less than many other girls I knew had experienced."

The great power of violence, of course, is to harm those we love, and In the Country of Women overflows with love. One of those centers of love is the house where Dwayne, Straight's boyfriend, then husband, grows up. While the women featured in the memoir span continents, countries, and states, the present action of the book is rooted in Riverside, California, an inland city not far from the Mexican border. It is there that Straight is introduced not just to Dwayne's parents, but to his aunts, uncles, and cousins who meet there for cookouts, community, and conversation. The warmth from these gatherings almost lifts off the page and invites the reader to pull up a chair. It is that time in the driveway and the surrounding community of family and friends that most evokes, biraderi, the Pakistani word Straight uses to describe the strong networks of kinship and clan.

While Straight reflects on far more than her own upbringing and experiences growing up, she brings her trademark lyricism and a significant dose of humility to those segments of the book. We learn that she was an early reader, drawn to Greek and Roman mythology. Her literary inclinations also were apparent early on, and she recalls that even "as a child in the laundromat, I must have known my life would be about language, and place, because I saw people's baskets full of stories, the way their hands moved when they held up a shirt, their eyes narrowed with private legends of the man or baby or mother to whom it belonged." Her trips to the bookmobile come across as no less nourishing than her mother's food.

Not all the women Straight introduces us to are mothers, but it seems fitting that her book's final chapter also is addressed to her daughters. They share an important distinction from their mother, who has decided that the world is divided into two types of people: those who leave, and those who stay. Aside from a brief departure from the neighborhood for Amherst — where she was taught by her mentor, James Baldwin — Straight is a stayer. Her daughters however, now grown, have left for new adventures. Luckily, Straight's gift to them — the story of where they come from and the amazing women who have shaped their lives — nicely doubles as a gift for us.