Accessibility links
Review: 'BH90210' Goes Through A Mirror, Weirdly There's certainly no need to revisit the characters from Beverly Hills, 90210. So to fill what they hope is an appetite for nostalgia, the stars are playing themselves in a showbiz story. 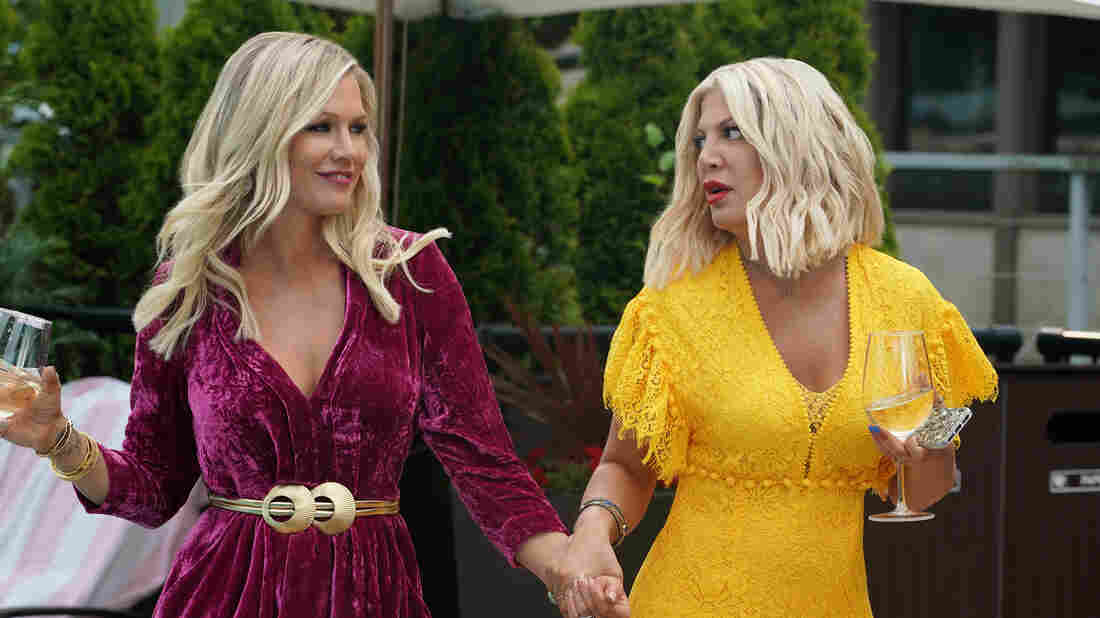 Jennie Garth and Tori Spelling play themselves in BH90210, which both is and isn't a Beverly Hills, 90210 reboot. It's complicated. Shane Harvey/Fox hide caption 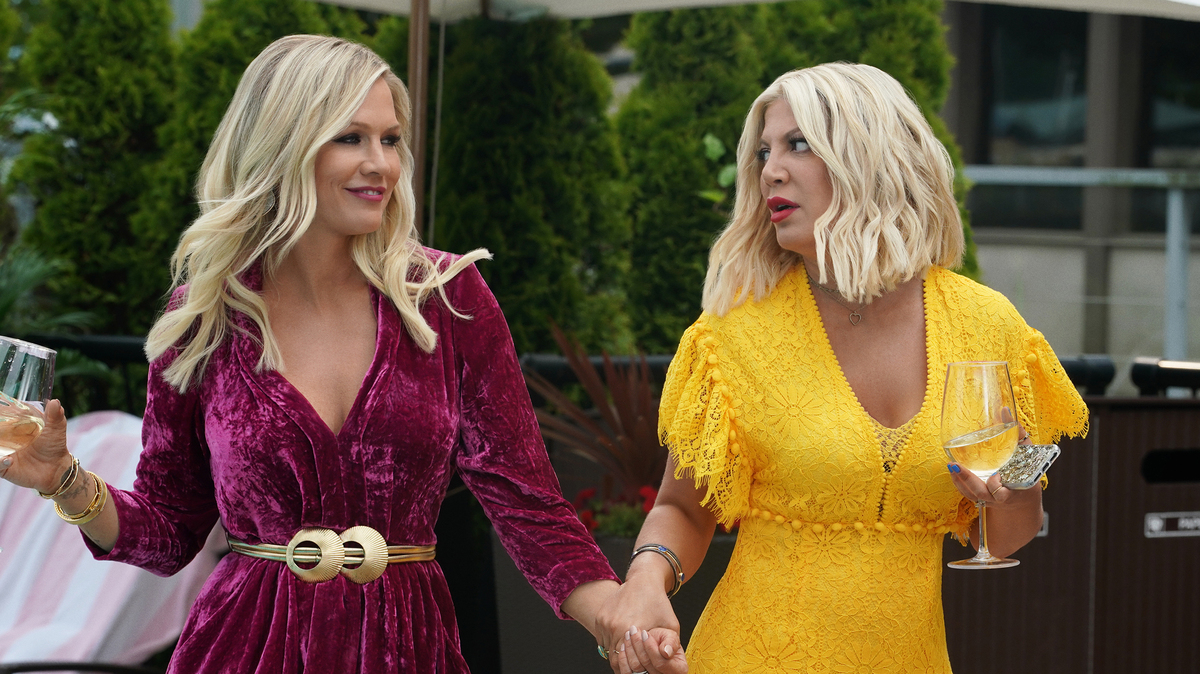 Jennie Garth and Tori Spelling play themselves in BH90210, which both is and isn't a Beverly Hills, 90210 reboot. It's complicated.

How do you do a reboot when there's absolutely no reason to do a reboot?

The characters on Beverly Hills, 90210 were never particularly interesting. They were generic rich high-school students who grew into generic rich college students and then generic rich adults. They had money to chase their dreams regardless of talent (Owning a club! Running a newspaper! Having a boutique!). Their problems (Stalking! Diet pill addiction! Gambling addiction! Cocaine addiction! Meth addiction! Joining a cult!) would, in most cases, flare up and then go away, specifically because without them, there was no plot other than everyone sleeping with each other.

In short, there is no ever-loving reason to revisit any of these ding-dongs.

Refreshingly, the makers of the new show BH90210, a nostalgia product for people who miss the original show, know there's no reason to. So they don't try. Instead, what begins Wednesday night on Fox is a scripted show about the actors trying to decide whether to revive the teen soap they were on when they were young. And all those actors play themselves. Get it? So you're not catching up with Brenda and Brandon; you're catching up with Shannen Doherty and Jason Priestley, playing fictionalized versions of themselves in a kind of showbiz comedy-drama-soap-farce about a potential 90210 reboot.

There are strong resemblances between the fictionalized versions of these actors and the real ones: Like the real Gabrielle Carteris, the one on the show is the president of the actors' guild, and like the real Tori Spelling, the scripted one has had financial problems after using reality television to support herself and her large family for years. But the spouses are played by actors and the details are made up and so forth.

In the first episode, the cast (Jason, Tori, Gabi, Jennie Garth, Ian Ziering, and Brian Austin Green) gets together at an anniversary panel. After they share a wild night of light infidelity and petty theft, Tori decides that the way to pay her many overdue bills is to convince everybody to come back together for a 90210 reboot. But they may also need Shannen — that's Shannen Doherty — who we learn is off running an animal sanctuary and has been semi-estranged from the cast for years. (Another element borrowed from real-life rumors, at the very least.) There is a reasonably classy acknowledgment that a core cast member, Luke Perry, has died, but Tori hypothesizes that the rest of them just might be able to rally and put on a new show.

On the one hand, this is a very strange way to make a reboot. It's not even of any potential value to anybody who isn't looking at it as nostalgia — in no way would this hold up as a new Fox comedy for a curious person coming to it fresh. There is no straight-faced argument for it as an independent piece of work.

But as a nostalgic doodad, which is all that a lot of these reboots are anyway? It's kind of cute. And, as previously mentioned, strange.

There's no question that they're flirting with a kind of uncanny San Fernando Valley, where the fictionalized actors are fake but also real, but also fake, ad infinitum. Because Spelling is in fact an executive producer of BH90210, just as fictional Tori is driving the reboot and trying to get everyone on board. Brian is married to a very famous woman, just as Green is married to Megan Fox. Jennie has had a couple of failed marriages, just like Garth, and Jason really wants to direct, just like Priestley.

There are a certain number of silly meta-jokes, like the fact that Tori's husband is played by Ivan Sergei, who was Spelling's co-star in the legendarily campy TV movie Mother May I Sleep With Danger? It's hard not to think that a moment in which Jason is kicked right in the Priestley, as it were, is meant as a little gift to people who found Brandon Walsh to be a self-righteous gasbag. (He was one, FYI.)

It's hard to give a proper critique of something like this. It's more like a bonus feature on a DVD than anything else. They've only given critics the first two episodes, and Shannen hasn't even joined the group yet, so who knows how committed they are to making this as wild as it might be. But perhaps because expectations were lower than the top of Brandon's head (he was short, you see), I must admit that I chuckled at its audacious weirdness. It's the kind of thing that passes the time while you fold the laundry, and then you never think about it again.

Some days, that's a blessing.