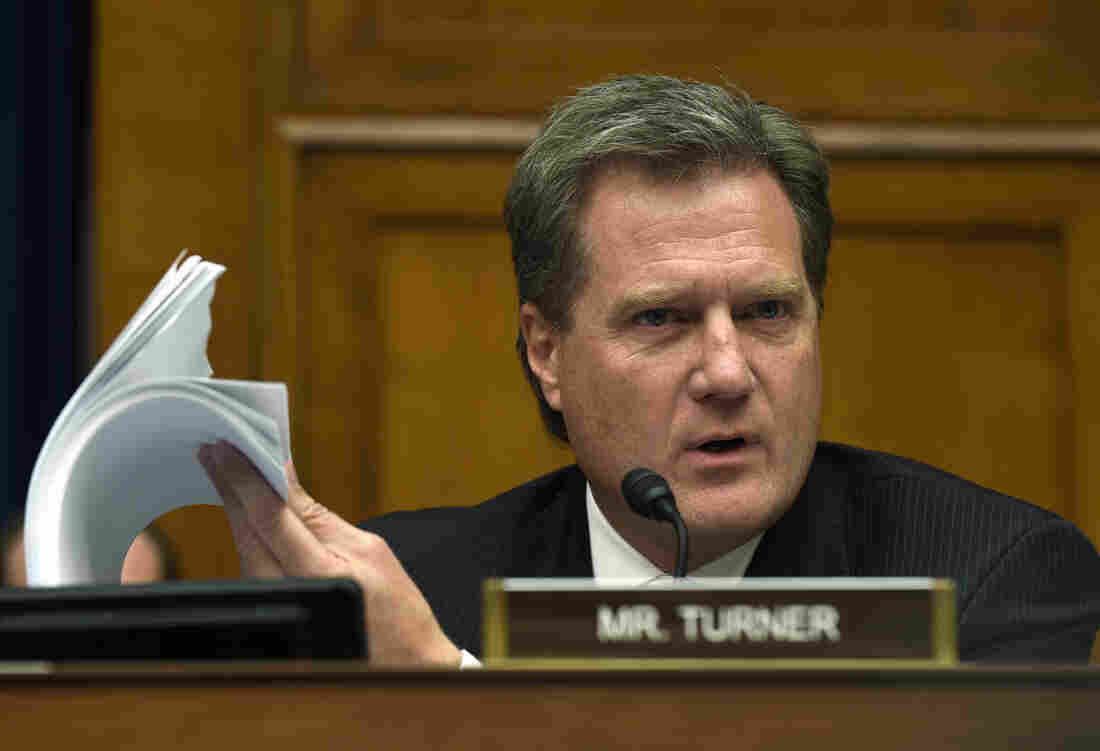 Republican Rep. Mike Turner represents Dayton, Ohio, where a mass shooting occurred over the weekend. He opposed a House bill expanding background checks but came out in favor of measures to ban assault-style weapons and proposals for red-flag bills. Susan Walsh/AP hide caption 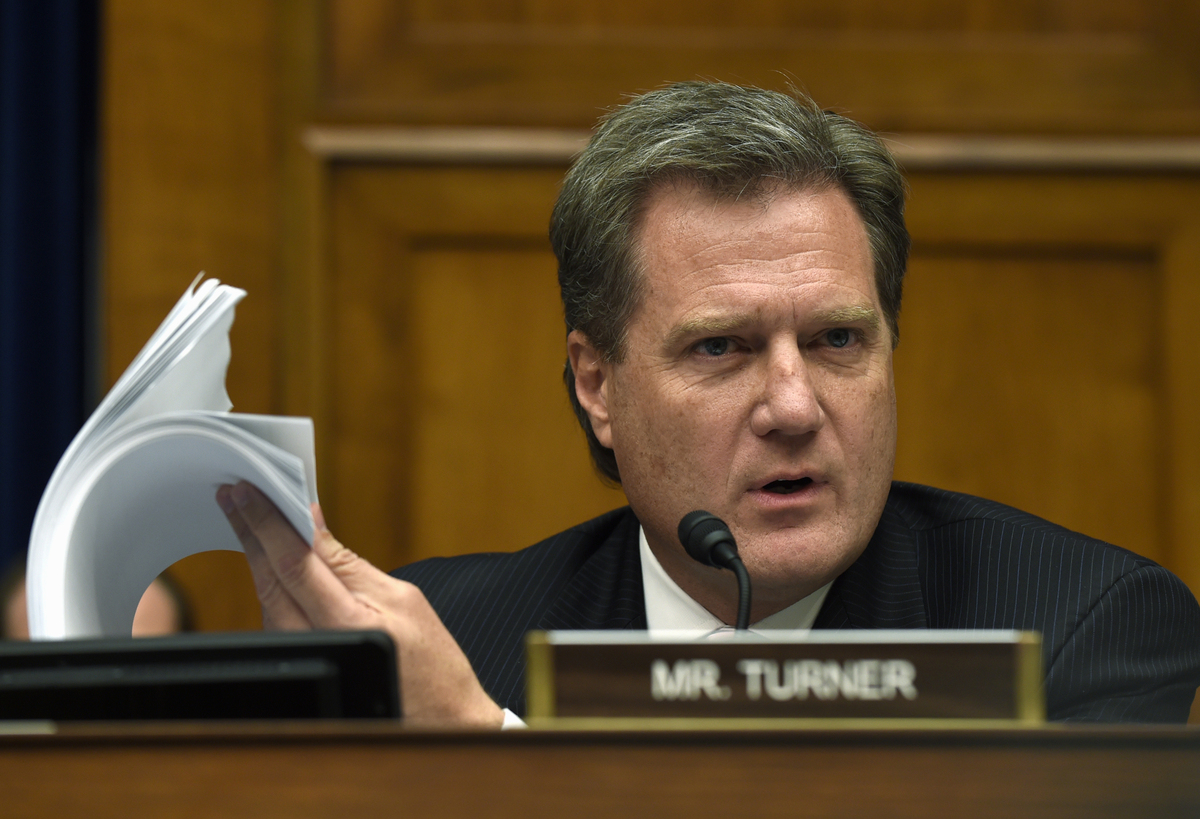 Republican Rep. Mike Turner represents Dayton, Ohio, where a mass shooting occurred over the weekend. He opposed a House bill expanding background checks but came out in favor of measures to ban assault-style weapons and proposals for red-flag bills.

Senate Majority Leader Mitch McConnell is ignoring Democrats' efforts to pressure him into calling the Senate back from recess to vote on gun legislation to expand background checks following back to back mass shootings.

But there is movement among some Republican lawmakers, who are calling for action on some gun control measures.

GOP Rep. Mike Turner, who represents Dayton, Ohio, where a gunman used an assault-style weapon to kill nine people and injure at least 27, announced on Twitter on Tuesday that he now backs proposals to enact new limits on firearms.

He added that he also backs so-called red-flag bills that make it so that it's easier to identify people who could harm others. "Too often after mass shootings," he said, "we hear there were early warning signs that were ignored."

Turner's statement is stunning, considering the National Rifle Association endorsed him ahead of the 2018 midterm elections.

Republican Sen. Rob Portman of Ohio, who voted against a bipartisan bill to expand background checks in 2013, told Roll Call in the Capitol on Tuesday, "I think we should look at everything."

Trump Left A Lot Unsaid About Mass Shootings, Domestic Terrorism — And His Own Words

Portman also pointed to the need to press ahead with proposals to enact red-flag laws, noting that there were reports about the shooter in Dayton preparing lists of people he wanted to kill.

Turner did not mention any change in his position on proposals to expand background check requirements for gun purchases. He voted against the bipartisan bill that the House approved in February. Only eight House GOP members voted with the vast majority of Democrats to pass it.

President Trump tweeted Monday morning that parties needed to work together for "stronger background checks," but he omitted that push when he stepped in front of television cameras hours later.

We cannot let those killed in El Paso, Texas, and Dayton, Ohio, die in vain. Likewise for those so seriously wounded. We can never forget them, and those many who came before them. Republicans and Democrats must come together and get strong background checks, perhaps marrying....

Instead, the president called for red-flag laws, said it was time to reform mental-health laws (but gave few details) and said, "Mental illness and hatred pulls the trigger, not the gun."

The real test for any significant action on gun laws is in the GOP-controlled Senate, where McConnell has acted as a one-man blockade against the House-passed background check bill.

He is, however, open to some other proposals. McConnell hasn't spoken publicly since the shootings, but he released a statement noting that he talked with three key committee chairs about pursuing items that Trump mentioned.

"Only serious, bipartisan, bicameral efforts will enable us to continue this important work and produce further legislation that can pass the Senate, pass the House, and earn the president's signature," McConnell said.

Sen. Lindsey Graham, R-S.C., a key Trump ally, is developing a bipartisan bill with Sen. Richard Blumenthal, D-Conn., that would give grants to states to adopt red-flag laws so they can hire mental health experts to work through which cases need to be reviewed.

McConnell also has been in touch with the bipartisan sponsors of a compromise addressing background checks that Sens. Pat Toomey, R-Pa., and Joe Manchin, D-W.V., crafted after the Sandy Hook massacre in 2012. That vote fell six votes short in 2013, and only two GOP senators who backed it remain in the Senate — Toomey and Susan Collins of Maine.

Toomey, in an interview on CNN Tuesday, said there were a lot of new senators elected since his background check bill failed, and he hoped that legislation would get another vote. He maintained there was "broad support" for a red-flag bill in the Senate.

"As usual, Mitch McConnell wants an actual outcome, and there needs to be bipartisan support in both chambers," Toomey said, stressing that he and Manchin are still working toward that goal and communicating with the president.

The challenge for Toomey and other Republicans considering backing new gun controls is the president's inconsistent position on the issue. After 17 students and faculty were killed in a mass shooting in Parkland, Fla., in 2018, Trump publicly endorsed some proposals opposed by the NRA — only to reverse course later.

As the 2020 elections near, few Republicans will want to vote for any bill unless there is a strong message from the president that he will sign it. There is some evidence lawmakers who are home talking to constituents for an extended summer break are feeling some pressure to do something.

Illinois Rep Adam Kinzinger, an Iraq War veteran who voted against the bipartisan House bill on background checks, penned an essay on Medium, saying he is in favor of red-flag laws and now supports universal background checks, raising the age to purchase a firearm fro 18 to 21 and "banning certain high capacity magazines, like the 100-round drum the Dayton shooter used this weekend."

He added, "We have a gun violence epidemic, and to address it, we need to change some laws and change some hearts."

Pressed Tuesday about Republican reluctance to vote for gun-control measures, Toomey, who said he was a gun owner and supporter of Second Amendment rights said, "Yes, you can get reelected."

But he also admitted, "There's a lot of heat I can assure you, as well."