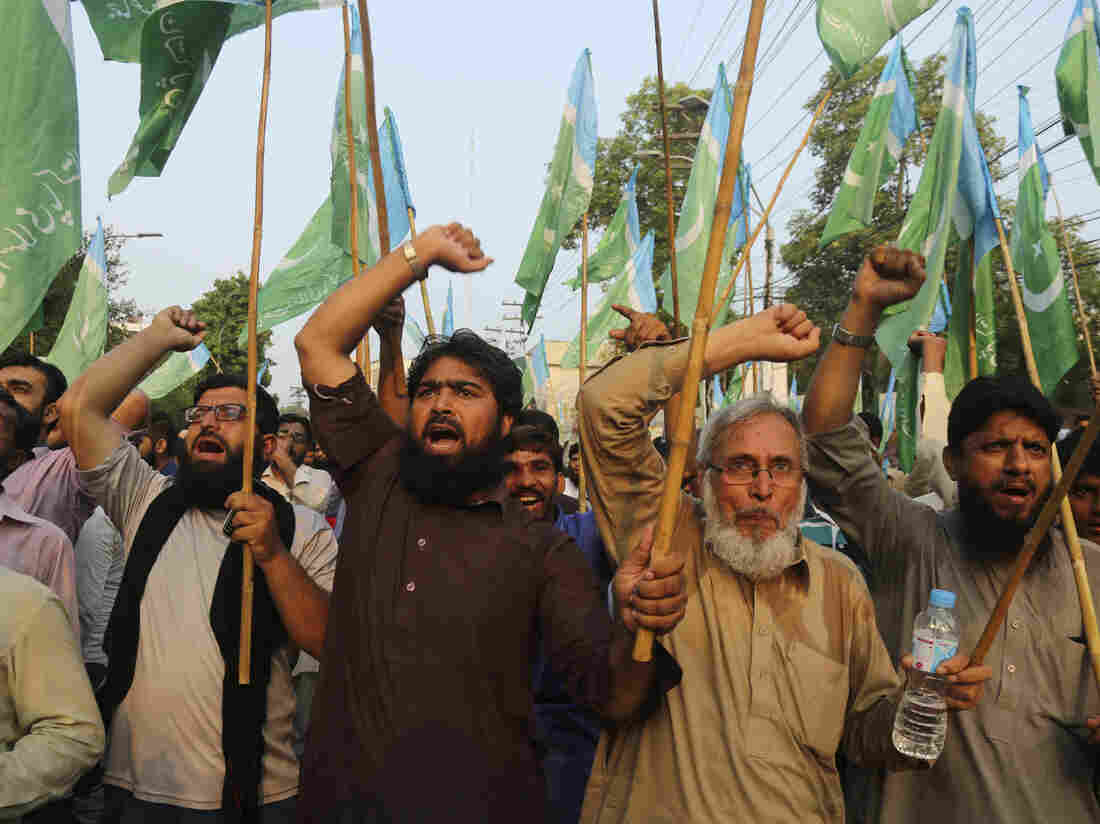 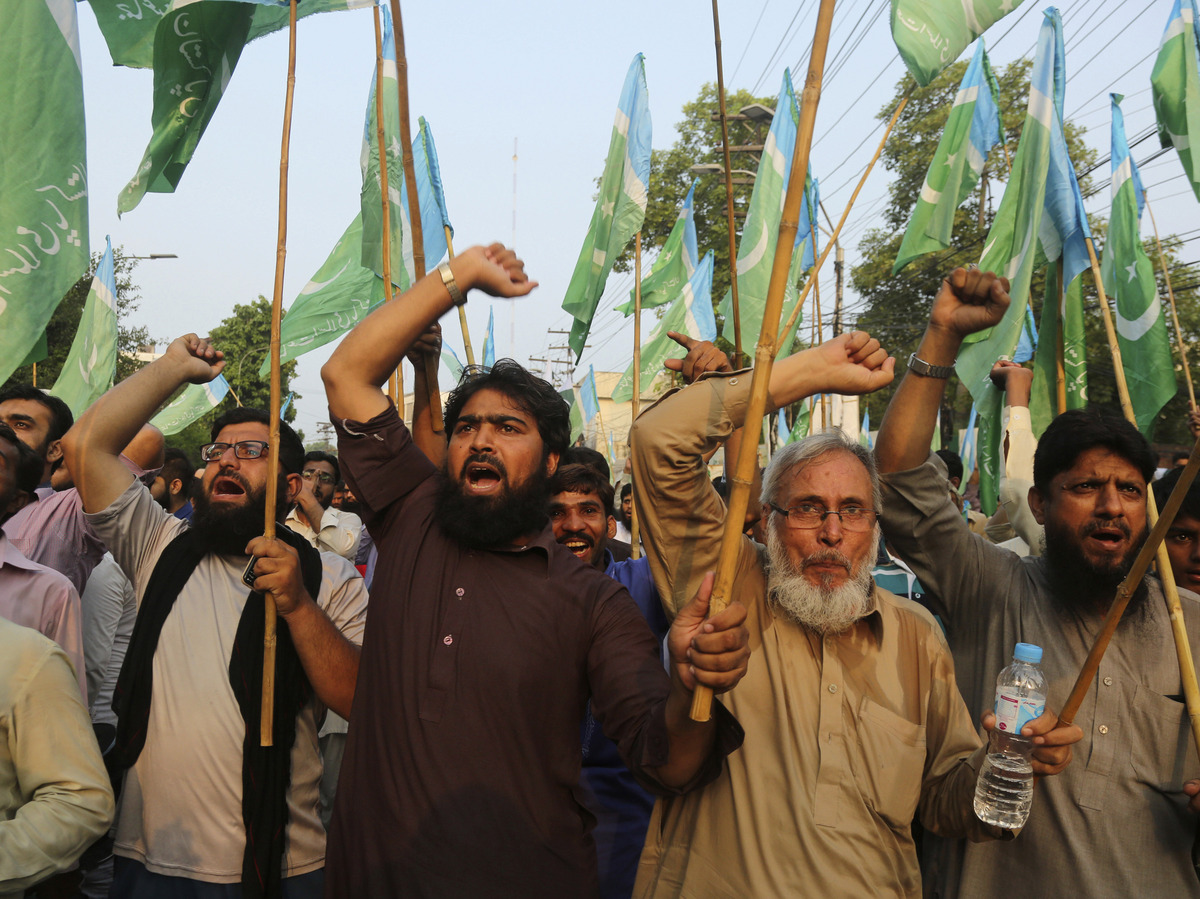 Supporters of the Pakistani religious party Jamaat-e-Islami demonstrate in Lahore, Pakistan, on Tuesday to protest India's policy on Kashmir.

Pakistan's prime minister warned that a move by India to strip Kashmir of its special status could lead to war between the two countries and the "ethnic cleansing" of Muslims in the restive Himalayan region.

Imran Khan cited a suicide attack in February that killed at least 40 Indian security forces in Indian-controlled Kashmir and was followed by airstrikes and a dogfight between Indian and Pakistani pilots.

"Such incidents are bound to happen again. I can already predict this will happen," Khan said, addressing a joint session of Parliament on Tuesday.

"They will attempt to place the blame on us again," Khan said. "They may strike us again, and we will strike back. ... Who will win that war? No one will win it and it will have grievous consequences for the entire world."

Khan also accused India's Hindu nationalist government of promoting a "racist ideology." He predicted that India would intensify a crackdown on Kashmiris, saying, "I fear they may initiate ethnic cleansing in Kashmir to wipe out the local population."

The disputed Muslim-majority territory of Kashmir is split between India and Pakistan. They have fought two major wars over the region, which is a source of constant tension between the rival neighbors.

In recent weeks, President Trump has offered to mediate between India and Pakistan over Kashmir, something India has rejected. Pakistani officials say they intend to ask Trump whether he might be willing to press India again. 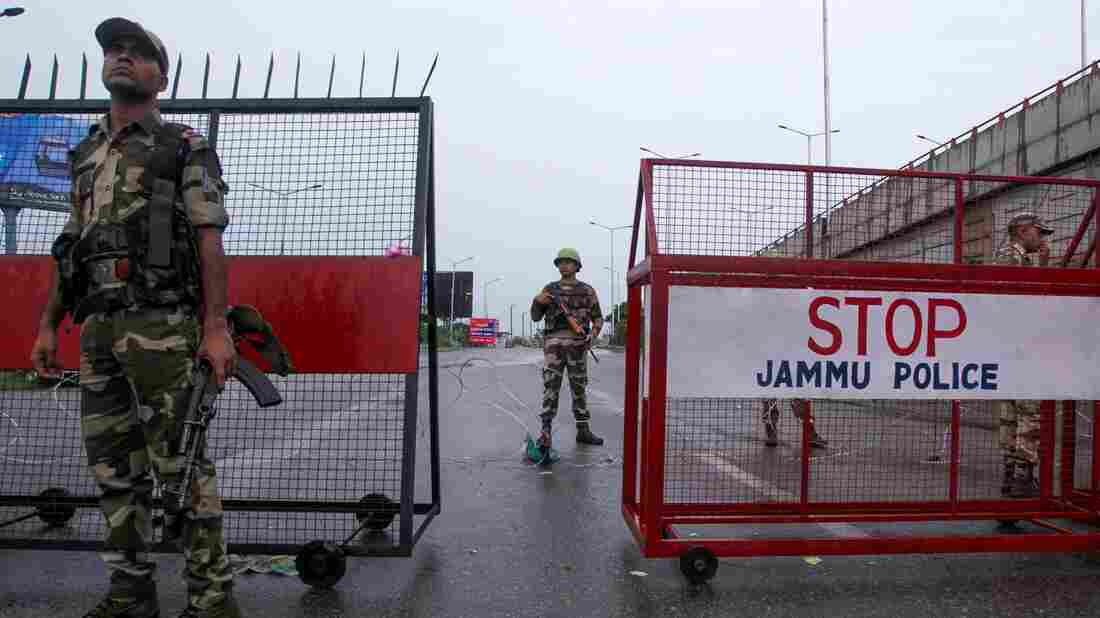 Security personnel stand guard at a roadblock in the city of Jammu on Tuesday. Rakesh Bakshi/AFP/Getty Images hide caption 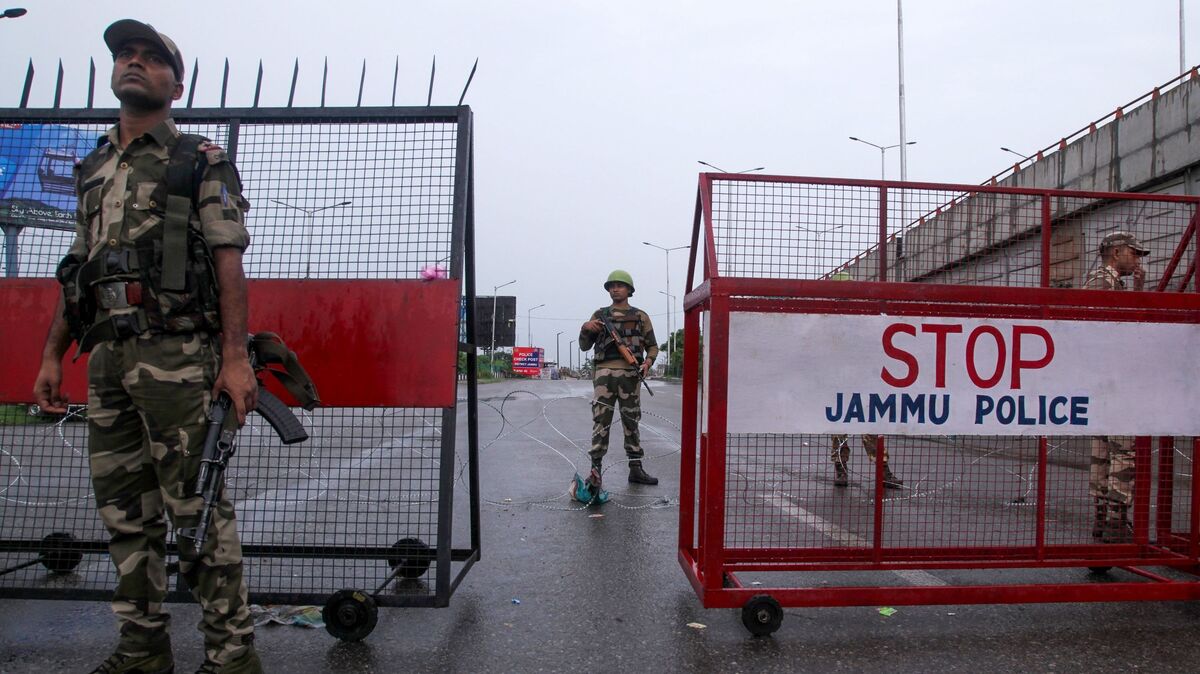 Security personnel stand guard at a roadblock in the city of Jammu on Tuesday.

"We will ask USA to play an active role on this issue," said Fawad Chaudhry, the minister for science and technology and a former government spokesman. President Trump, Chaudhry said, "fully realizes the importance of this issue."

Pakistan is helping the United States to negotiate a deal with the Taliban that would allow American forces to withdraw from Afghanistan. But if conflict flares up surrounding Kashmir, those efforts could be upended, said Mosharraf Zaidi, a columnist for the Pakistani daily The News.

"It will fundamentally alter the ability of Pakistan to try and support the U.S. in its mission in Afghanistan," he said.

Indian-administered Kashmir has remained on lockdown following a decree from India's president on Monday rescinding the region's special status. On Tuesday, India's Parliament passed the Jammu and Kashmir Reorganization Bill formalizing the change, which is likely to be challenged in court on constitutional grounds.

Since it acceded to India in 1947, Kashmir — which also has sizable Hindu and Buddhist minorities — has enjoyed a semi-autonomous status. But discontent there has fueled a protracted separatist movement that has claimed some 45,000 lives since the late 1980s.

Indian Prime Minister Narendra Modi, whose pro-Hindu Bharatiya Janata Party won an overwhelming victory in elections this spring, vowed in the campaign to revoke the constitutional clause dealing with Kashmir, known as Article 370.

Meanwhile, in Kashmir, where Internet and phone service were cut off ahead of Monday's decree, some 400 local politicians have been placed under arrest by Indian security forces, according to India Today.

The magazine reports that hotels, guest houses, government and private buildings have been turned into makeshift jails to house the detainees, which include separatist leaders and even politicians seen as working for an accommodation with India.

Jammu and Kashmir Director General of Police Dilbagh Singh was quoted by the Press Trust of India as saying Kashmir's summer capital, Srinagar, was "totally peaceful."

Although the communications blackout made it difficult to know the situation in Kashmir, there were reports of sporadic protests. There have also been numerous protests across Pakistan, proclaiming solidarity with India's Muslim Kashmiris.

Rupert Colville, a spokesman for the United Nations High Commissioner for Civil Rights, expressed deep concern Tuesday over the situation in Kashmir. "We are seeing, again, blanket telecommunications restrictions, perhaps more blanket than we have ever seen before, the reported arbitrary detention of political leaders and restrictions on peaceful assembly," he told reporters in Geneva.