Accessibility links
New Lawsuit Reveals More Sexual Abuse Allegations Against Boy Scouts Of America A lawsuit filed in Pennsylvania this week could be the first in a wave of new sexual assault allegations against the Boy Scouts of America. 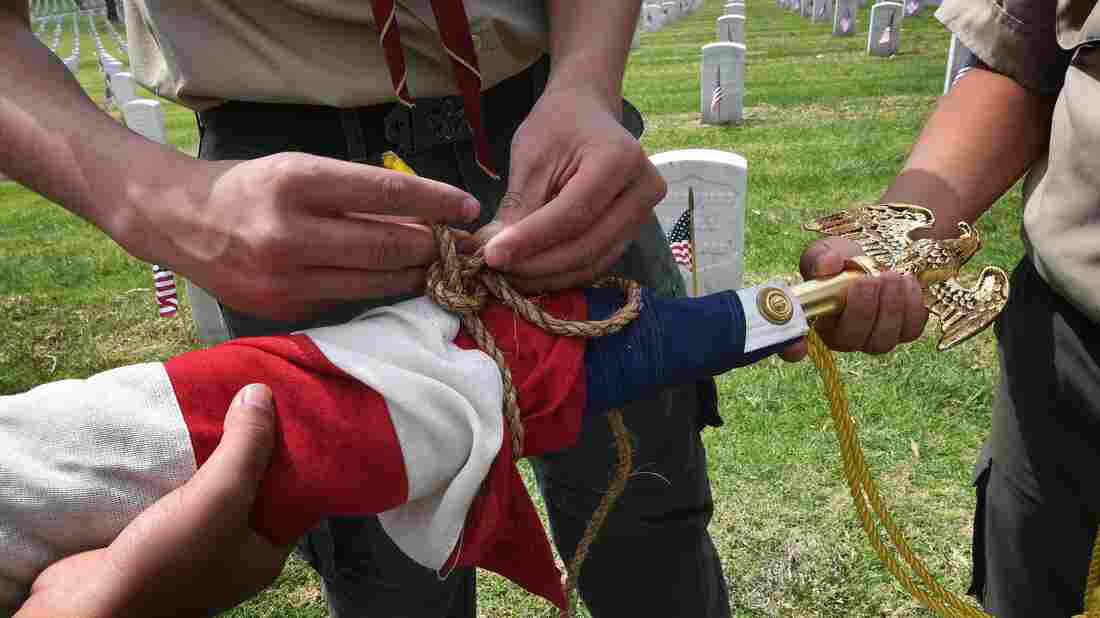 Boy Scouts at Los Angeles National Cemetery prepare a U.S. flag beside the graves of war veterans on May 25, during the annual flag placement ceremony for Memorial Day to honor the fallen. Mark Ralston/AFP/Getty Images hide caption 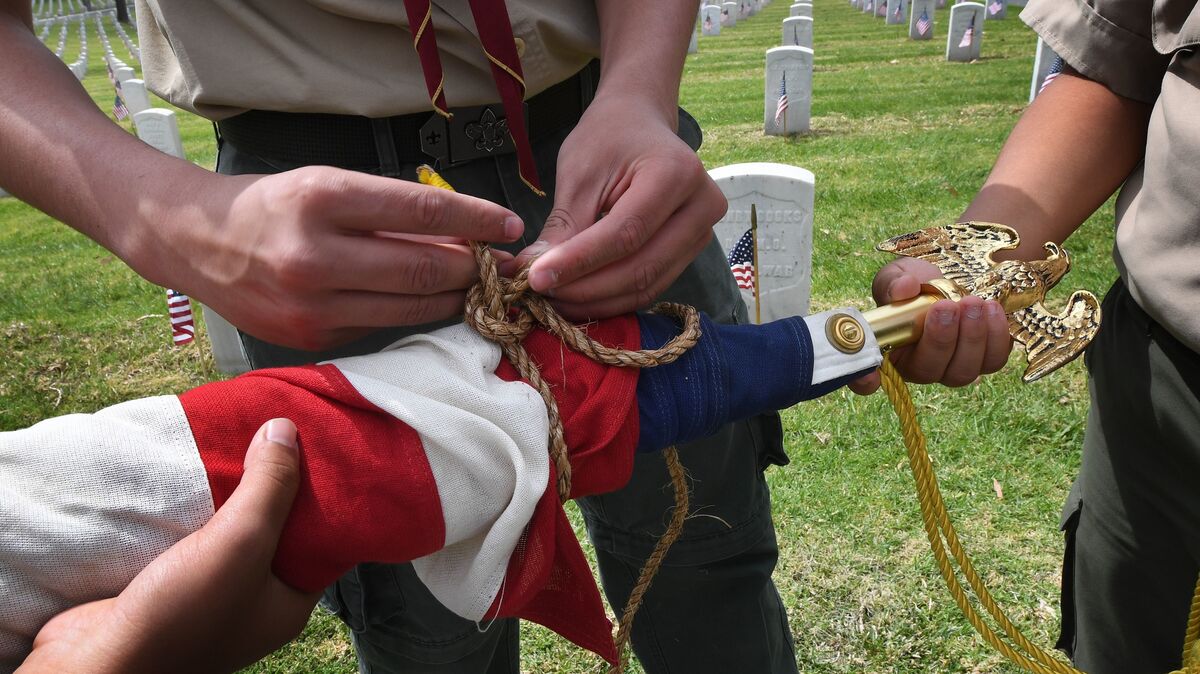 Boy Scouts at Los Angeles National Cemetery prepare a U.S. flag beside the graves of war veterans on May 25, during the annual flag placement ceremony for Memorial Day to honor the fallen.

The Boy Scouts of America are facing new allegations of sexual abuse from about 800 men across the country, according to lawyers representing them. One of the men filed suit Monday in Philadelphia.

The plaintiff, a Luzerne County, Pa., man identified in the suit only as S.D., says an assistant scoutmaster molested him at a camp and at the scoutmaster's house dozens of times in the 1970s, over the course of about five years starting when he was about 12 years old. Named as defendants in the lawsuit are the scoutmaster, Paul Antosh of Wilkes-Barre, Pa.; the national Boy Scouts of America organization, based in Texas; and the regional Pennsylvania Mountains Council.

This may be the first of many lawsuits, Philadelphia personal injury attorney Stewart Eisenberg said at a news conference in Washington, D.C., Tuesday.

Eisenberg has collected the reports of 800 men from across the country who say they were abused by scout leaders. Roughly 40 are from Pennsylvania, and 20 are from New Jersey.

The Boy Scouts of America is the 18th largest nonprofit in the United States, with revenue exceeding $780 million annually, according to the court filing. It has more than 2 million active scouts and 1 million volunteers.

Eisenberg said the problems in the organization date to its founding.

"There is a crisis in the Boy Scouts," said Eisenberg. "And there has been for many years, many decades — in fact, since the early 1900s."

Since 1919, the Boy Scouts of America has maintained a group of files known as the "ineligible volunteer files," which acknowledge predatory behavior and pedophilia among scout leaders. The Oregon Supreme Court ordered the release of those files in 2012.

Despite that, Eisenberg alleges in the lawsuit, the BSA is continuing to hide the extent of pedophilia in its ranks, as evidenced by the fact that the "vast majority" of clients he represents have named abusers who had not yet been identified by the organization. The lawsuit states that, therefore, "Boy Scouts Defendants continue to perpetuate a continuing and serious conspiracy to conceal and cover up many of their abusers in BSA scout troops throughout the United States and overseas."

The allegation that the BSA is attempting to conceal the abusers is relevant to the plaintiff's eligibility to file suit. Though some states, like New Jersey, have passed laws in recent years extending the period of time in which victims can come forward, Pennsylvania has not done so. The statute of limitations for civil child sex abuse in Pennsylvania is capped at age 30. But Eisenberg is relying on the precedent set by the Pennsylvania Superior Court, which ruled in Rice v. Diocese of Altoona-Johnstown that if there was a fraudulent concealment of abuse, then the statute of limitations should begin as of the moment the abuse was revealed.

In an email Tuesday, Boy Scouts of America acknowledged that the organization has not always responded to allegations in a manner "consistent with our commitment to protect Scouts, the values of our organization, and the procedures we have in place today." But it said that in addition to maintaining the volunteer-screening database, the organization also conducts background checks on volunteers and has a policy against leaving scouts alone with a single troop member. In the emailed statement, the BSA said it is its policy to report any suspicion or allegation of abuse promptly to law enforcement.

"We believe victims and remove individuals based on only allegations of inappropriate behavior," the statement said.

That has not always been the policy, however. In a 1972 letter addressed to all scout executives that is included in the lawsuit filed by Eisenberg, BSA executive Paul Ernst outlined a course of action in the event of inappropriate behavior that did not involve contacting law enforcement.

The first step is to inform an executive at the national office. Next, the scout executive is to secure hard evidence concerning the situation. A letter should then be delivered to the volunteer, and he should be told he is not being asked to continue in his position, without explanation for why. There are also a series of steps outlined if a person whose misconduct had been in question wishes to reenroll as a volunteer. None of the courses of action involve law enforcement.

Abused in Scouting, a victims group established by Eisenberg and other lawyers nationwide, sent Boy Scouts of America a list of allegations on June 13. BSA says it has been investigating the list to the best of its ability and reporting to local law enforcement agencies when enough detail was provided.

BSA said it supports the creation of a government-run child abuse database that all youth-serving organizations could use. Conversely, Eisenberg urged Congress to start a formal investigation into the BSA. The organization was chartered by Congress in 1910.

A string of lawsuits since 2017 has prompted the Boy Scouts of America to consider filing for Chapter 11 bankruptcy, though in its statement Tuesday the organization said no formal decision has been made about its "potential financial restructuring." In its 2016 financial report, the BSA made clear the impact that current and potential future lawsuits could have on the financial viability of the organization.

Eisenberg said Tuesday that the threat of bankruptcy was the impetus for him to encourage clients to speak out.

"We thought it was necessary to reach out to as many people as possible to have them come forward to tell their story and file claims today with the idea that hopefully that will protect in case of bankruptcy," said Eisenberg. He said that if the BSA filed for bankruptcy, no new litigation could be filed and any existing cases would be halted.