Accessibility links
U.S. Women's Pro Sports Leagues Hope For Women's World Cup Bump Too Will the latest U.S. victory in the Women's World Cup lead to a surge of popularity in other women's pro sports leagues? Executives and players hope so. 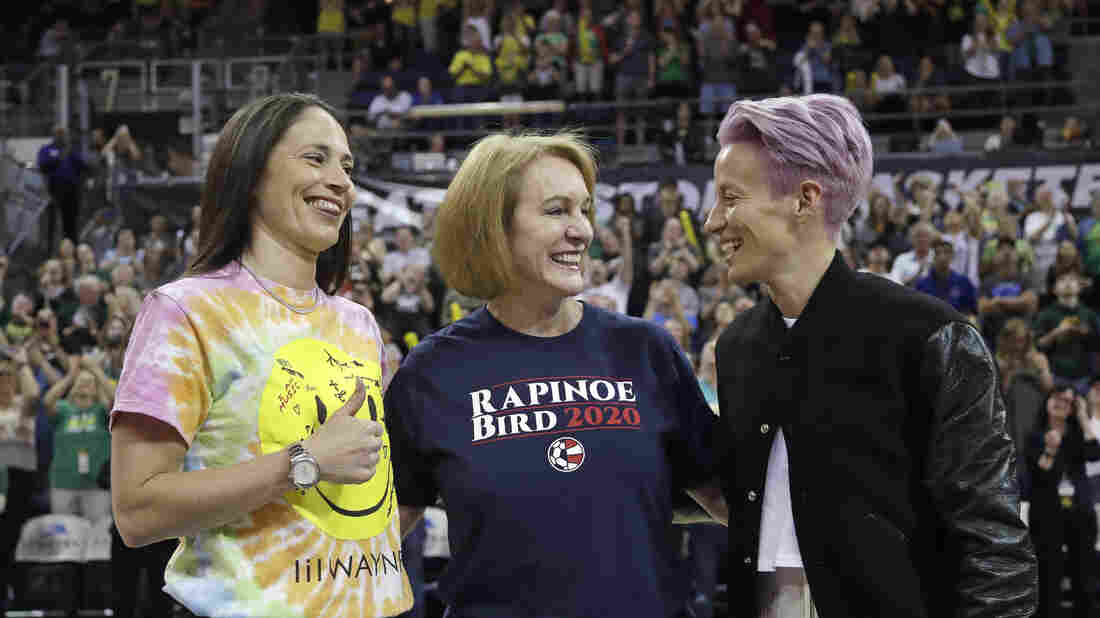 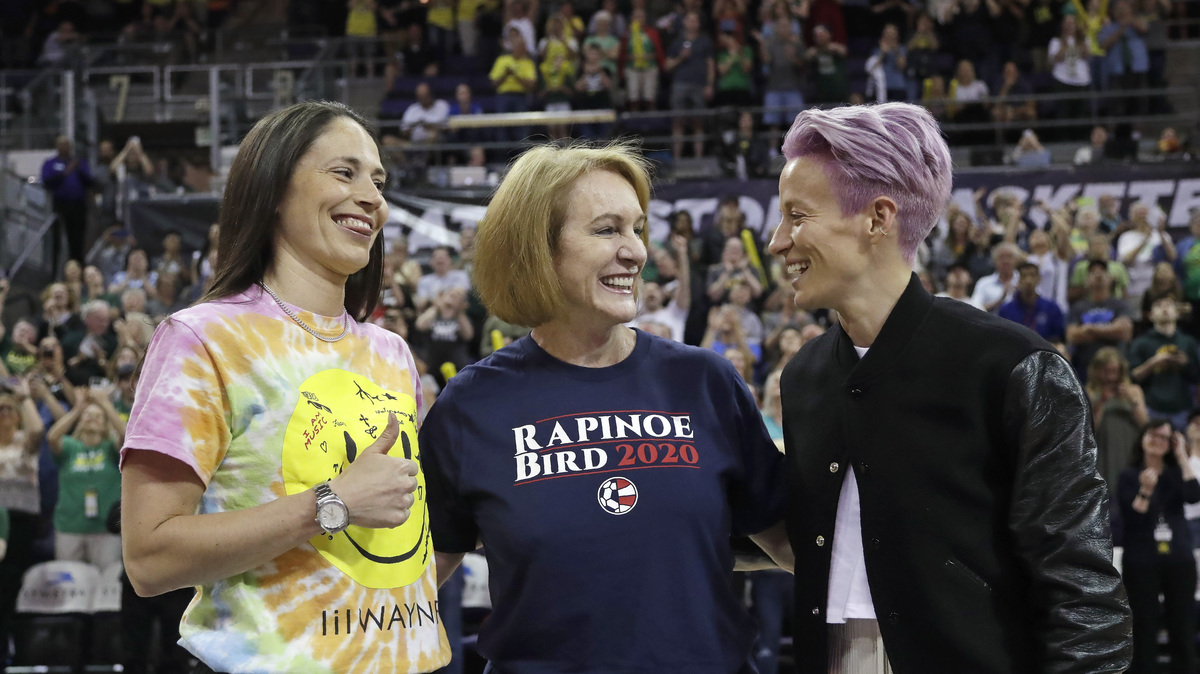 Fans of the World Cup champion U.S. women's national soccer team are getting what they want.

The team began a victory tour last weekend. It runs until October.

It's a heady time for women's soccer. But other women's sports want to take advantage of the moment as well. And they're hoping to overcome cultural obstacles that traditionally have made their sports less relevant.

Five days after the U.S. won the Women's World Cup, fans of the WNBA's Seattle Storm welcomed a surprise visitor to the team's home arena. Even from the cheap seats, the pink/purple hair gave it away.

"Well, look who has graced us with her presence," Storm play-by-play announcer Dick Fain told a television audience. "Is there a more recognizable face in the world of sports over the last month than that young lady on the right, Megan Rapinoe?!"

Actually, this moment wasn't a shock. Rapinoe and Storm star Sue Bird are one of Seattle's "it" couples. Still, Rapinoe's appearance and standing ovation from an arena full of basketball fans was a reminder of the powerful crossover potential of the women's World Cuppers.

"For me it was just simply hopeful," said Storm CEO and General Manager Alisha Valavanis. "That that awareness would continue to expose the country and the globe to the other sports."

Like ice hockey, lacrosse, softball, pro soccer — and basketball, the most prominent of this country's women's professional sports.

It would be wonderful, Valavanis said, if this awareness of the women's soccer team and exposure to the others were like a magic wand. That could wave away the chasm separating women's and men's pro sports, on issues of money, visibility and relevance.

But there's no magic wand.

Talking is a start.

Rapinoe and her soccer teammates have done plenty of that, about the gap in pay and inferior working conditions. WNBA players are confronting similar issues. Seattle forward Alysha Clark said they've been newly inspired by the soccer team.

"They're helping grow the confidence of women athletes," Clark said, "to speak up for what we feel is right."

But if a conversation about women's sports truly has been sparked by the success and audacity of the U.S. women's team, ultimately it has to also confront an uncomfortable truth.

The biggest problem is ... what I would call invisible and cultural bias against women professional athletes.

"Whatever sport is out there that women are trying to make their way professionally," said Storm co-owner Ginny Gilder, "the biggest problem is the extent, the depth of what I would call invisible and cultural bias against women professional athletes."

Gilder has owned the Seattle Storm with two other women since 2008. As an undergraduate rower at Yale in the 1970s, she took part in a Title IX protest — Title IX is the federal law that, among other things, bans gender discrimination in girl's and women's sports. Gilder says the protest radicalized her and made her keenly aware of the bias.

"I think we make an assumption, it's a very deeply held assumption," she said, "that men are more important. And you actually start seeing that in sports at a very young age."

"[Even at] 10 years old, boys are starting to have more fans. By the time you get to high school, this interest in supporting boys' sports has been well established."

The choice of what to watch

The traditional argument is that male sports are better. Because the athletes mostly are bigger, stronger, faster. Gilder says it's what often tips the balance when fans have a choice — between paying money to watch a men's pro sporting event, or a women's. 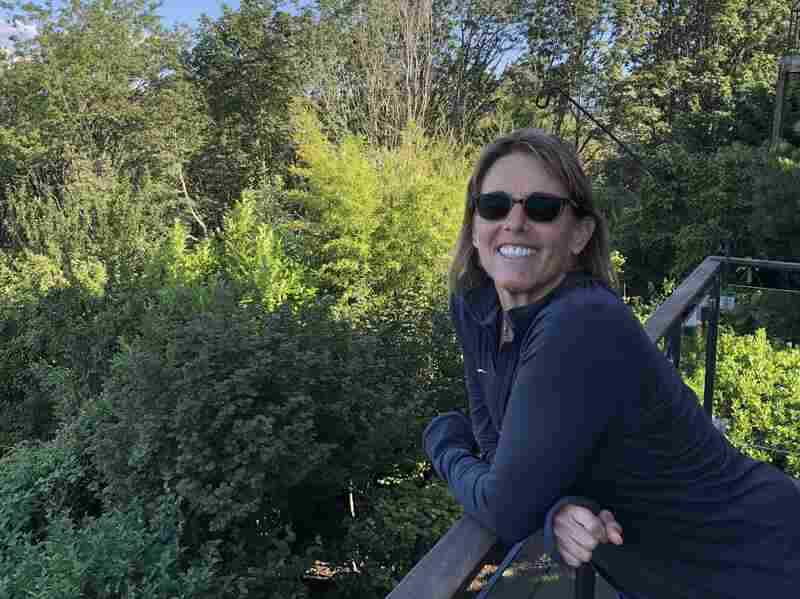 Ginny Gilder at her home in Seattle. Gilder, who won a silver medal in rowing at the 1984 Olympics, owns the Seattle Storm with two other women. Tom Goldman/NPR hide caption 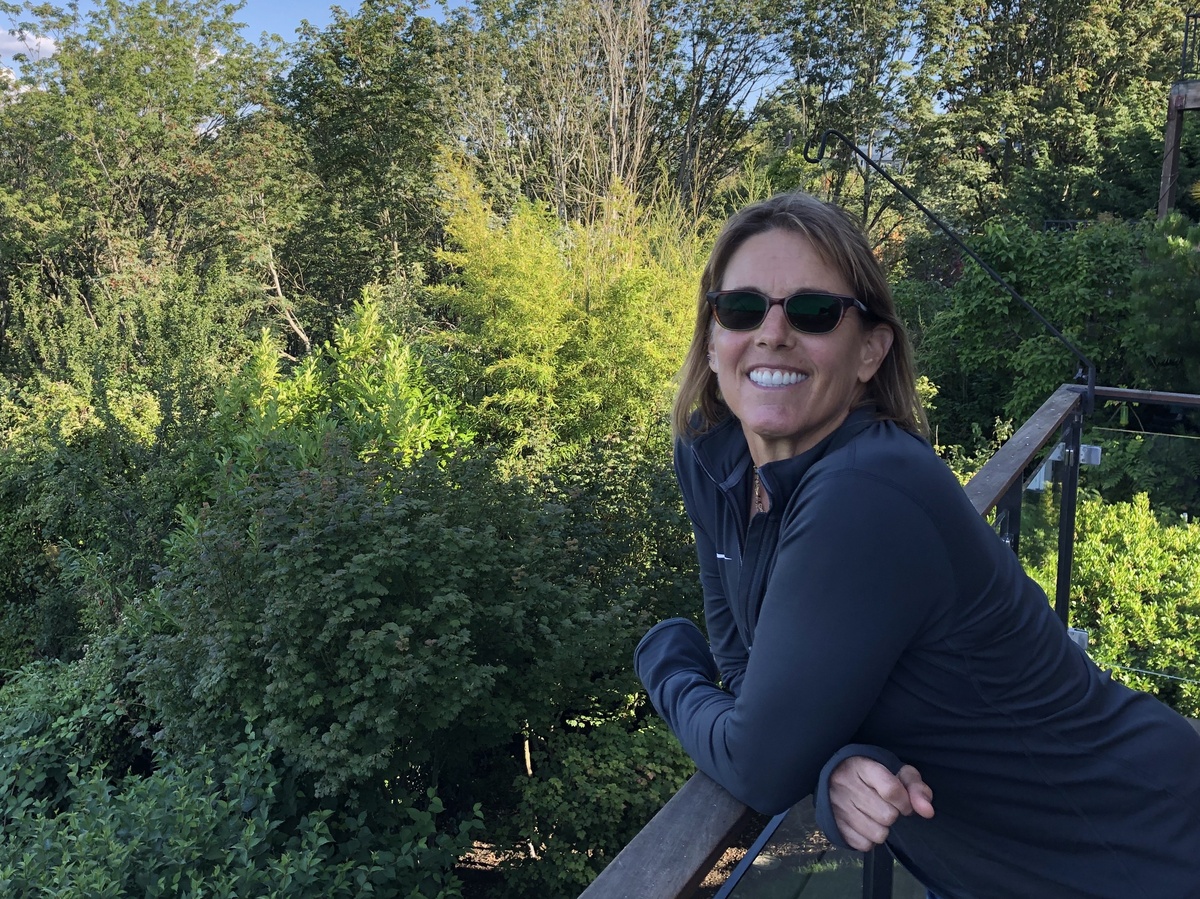 Ginny Gilder at her home in Seattle. Gilder, who won a silver medal in rowing at the 1984 Olympics, owns the Seattle Storm with two other women.

Storm CEO Valavanis places some of the blame on mainstream sports media.

"What if we started to play more highlights of the women?" Valavanis said. "Would we then have those individuals watching and saying, 'Gosh, I need to see the dunk. I'm only interested if they're as fast and strong as the men.' Or is that something we perpetuate because it's exactly what you're watching every day?"

At a recent WNBA game in Washington, Mystics fan Teresa Tidwell said she's had the choice of basketball games. And she prefers the women.

In each of its 23 seasons, the league reportedly has never made a profit. Building up attendance is an ongoing problem. Heading into the recent WNBA All-Star break, Seattle ranked fourth out of 12 teams in total attendance. Still, the Storm does what it can to bring fans to games. Including a promotion offering free tickets — for donated blood.

Jordan Lake, 29, and two friends took advantage of the deal at a recent home game. Their first WNBA experience.

"It's entertaining," Lake said, watching the Storm play the Las Vegas Aces. "I've grown up with sports. I love sports. You've got to find something else to watch in the off-season of football, I suppose."

Not exactly a ringing endorsement. Despite the athleticism on display in a tight, competitive game, Lake said he probably wouldn't come back if he had to pay for a ticket.

Not betting, but hopeful

In the face of resistance, still, is there the chance to nudge a cultural change more toward women's sports?

"I absolutely believe that it's possible, said Storm co-owner Gilder. "At the same time, I'm a business person and I've been in this business for 12 years and I'm not betting on it."

But she's hardly giving up, either.

"I am a believer in progress," Gilder said. "And without showing up and agitating in some way, then you're wishing. That's your choice. Agitate or wait."

"Is this a pivotal moment?" she asked. "Has the Women's World Cup team been able to bring more awareness in a way that individual Americans start looking at themselves, not in a critical way but like ... 'Oh my gosh, [women's professional sports] could be fun to be part of,' or 'I want to do this,' or maybe a little bit of 'I should do this.' "

This fall and winter, some of the league's best players will tour the country as part of the lead-up to next summer's Olympics in Tokyo. The training and games will also help increase visibility and connect players more with fans.

Seattle guard Sue Bird helped come up with the idea.

Her inspiration, in large part, was the electric experience of the U.S. women's soccer team.