Accessibility links
The Pistol That Looks Like A Rifle: The Dayton Shooter's Gun The gun used in Dayton has the same core component as an AR-15-style rifle. It also has a 100-bullet magazine. But it's legally considered a pistol. 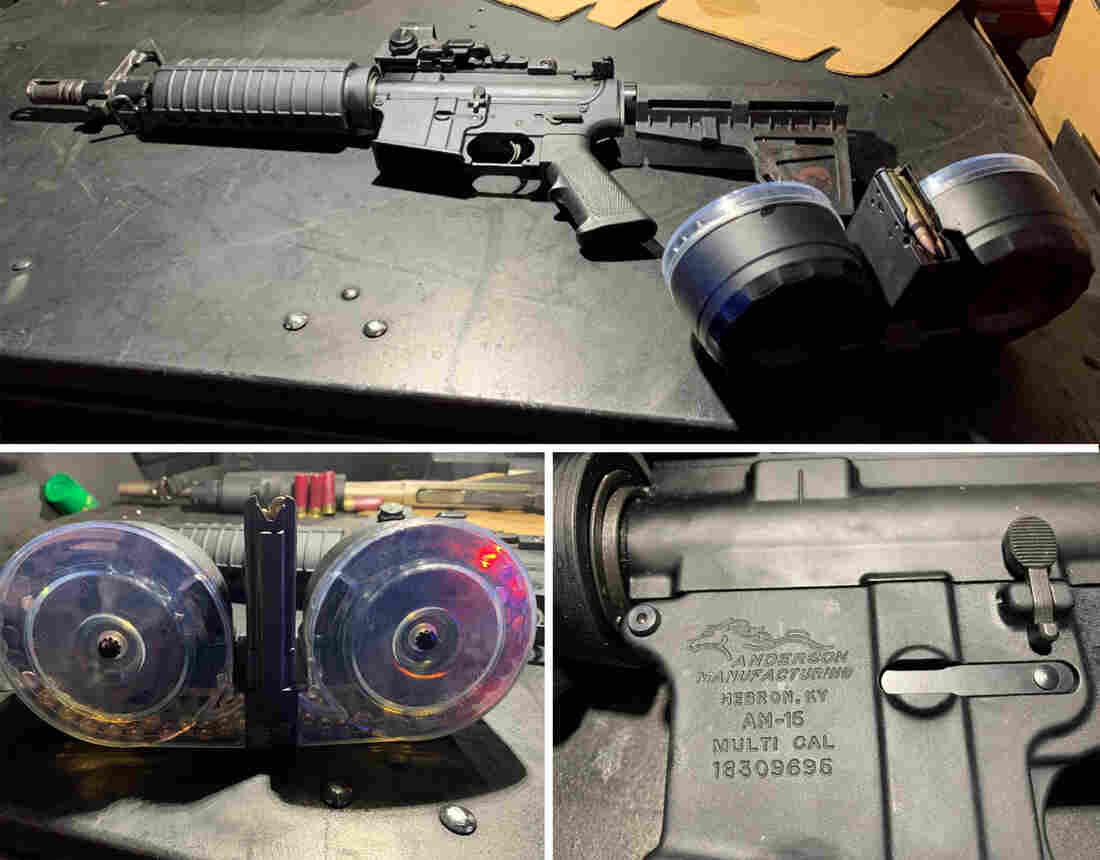 The gun used in the Dayton shooting (top) has a barrel that's shorter than the federal minimum for a rifle. Legally classified as a pistol, it was fed by a 100-round "double drum" magazine (lower left). A close-up of the gun's lower receiver (bottom right) shows the only part of the gun that is legally considered a firearm. Courtesy of Dayton Police Department hide caption 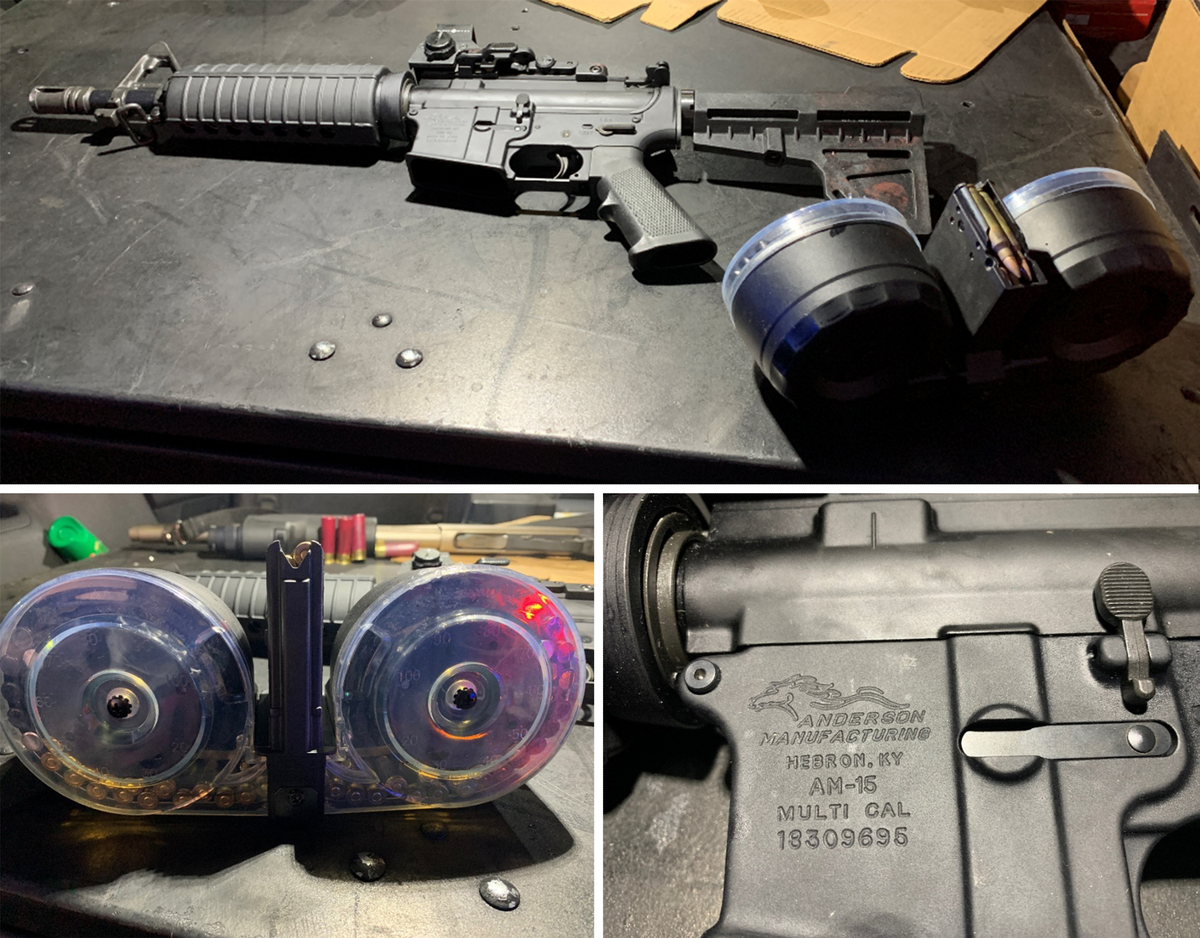 The gun used in the Dayton shooting (top) has a barrel that's shorter than the federal minimum for a rifle. Legally classified as a pistol, it was fed by a 100-round "double drum" magazine (lower left). A close-up of the gun's lower receiver (bottom right) shows the only part of the gun that is legally considered a firearm.

The gun that was used on Sunday to kill nine people and wound more than a dozen others in Dayton, Ohio, inflicted that damage within just 30 seconds. But while the weapon might look like a rifle to many people, it's technically classified as a pistol under federal law.

The AR-15-style pistol used in Dayton is capable of pouring a stream of high-velocity bullets, thanks to its huge ammunition magazine. Before it was turned against civilians, the gun was built from easily obtained components — leading to questions about America's gun laws and a gray area that exists between traditional categories such as rifles and pistols.

"You're talking, really, a weapon of mass destruction that you're giving over the counter to anybody," said Joseph Vince, a former special agent with the Bureau of Alcohol, Tobacco, Firearms and Explosives who now works as a gun crime consultant.

Under U.S. law, the only part of a gun that's technically considered a firearm — and must be shipped to a licensed firearms dealer — is the lower receiver. That's the shell-like piece that houses the trigger and bears the maker's serial number. Everything else, from the barrel to the firing mechanism, can be easily bought directly — online or in a store.

"This is a perfect example of how our federal gun laws now have been so convoluted and weakened that we can't determine basic components and what's what in firearms anymore," said Vince, who is also a criminal justice professor at Mount St. Mary's University in Maryland.

The gun used in Dayton had an AR-15-style lower receiver that was built by Anderson Manufacturing in Hebron, Ky. This week, such receivers were priced at $40.

When reached for comment, Anderson Manufacturing told NPR via email that the company "recently learned that a lower receiver manufactured by it in full compliance with its federal license was used in the senseless tragedy in Dayton, OH."

While expressing "sympathy and condolences to all affected by this criminal act," Anderson also noted that it has followed all laws and regulations around the products it sells to licensed dealers and customers.

A lower receiver like the one Anderson made can become the heart of either a pistol or a rifle. And it's that flexibility, Vince said, that can create a sort of hybrid: "They'll sell this firearm as a pistol, and then people can go and buy accessories to use the firearm more as a rifle" — but with a short barrel.

Fully assembled AR-15 rifles can be bought for less than $500 — and the price goes up sharply from there. While it can be cheaper to build one's own AR-15, the approach also allows gun owners to customize their guns, from choosing the caliber of bullet it will chamber to trying out unique accessories. And with an AR pistol, the process can result in an imposing weapon in a compact package.

"If a lower receiver is built into and registered as a pistol first, it can be stripped down and converted into a rifle in the future," the National Rifle Association says on its American Rifleman website, where it has published a guide for any people who want to build their own AR-15 pistol.

If a short barrel is used, like on the Dayton gun, it can be easier both to conceal and to handle in close quarters. And by omitting a traditional shoulder stock, the owner can maintain the gun's status as a pistol — while also keeping the barrel length under the 16-inch minimum that's required for rifles.

In general, the ATF says, "an AR pistol is not a short-barreled 'rifle' under the statutory definition in the National Firearms Act ... because it does not have a shoulder stock, and is not designed and intended to be fired from the shoulder."

In a statement sent to NPR, the ATF said such a gun is commonly defined as a pistol "because it is made with a pistol grip and designed to be gripped and fired when held in one hand."

On the Dayton gun, the stabilizing brace is the roughly triangular piece that resembles a shoulder stock. Under the ATF's rules, the idea is that shooters would use Velcro straps to secure the gun to their forearm — making it easier to shoot with just one hand, like a pistol.

Among gun enthusiasts, Anderson is known as a budget parts-maker. In touting its low-priced receiver, the company says the savings allow customers to spend more money on other accessories and parts. In the case of the Dayton shooter, the receiver was paired with a simple brace, a short barrel — and a 100-round "double drum" ammunition magazine.

To build a gun like the one used in Dayton, a lower receiver is paired with a "pistol kit" that frequently sells for as little as $300. Because they lack a lower receiver, those kits are legal to ship directly to customers, rather than to registered dealers who possess a federal firearms license. 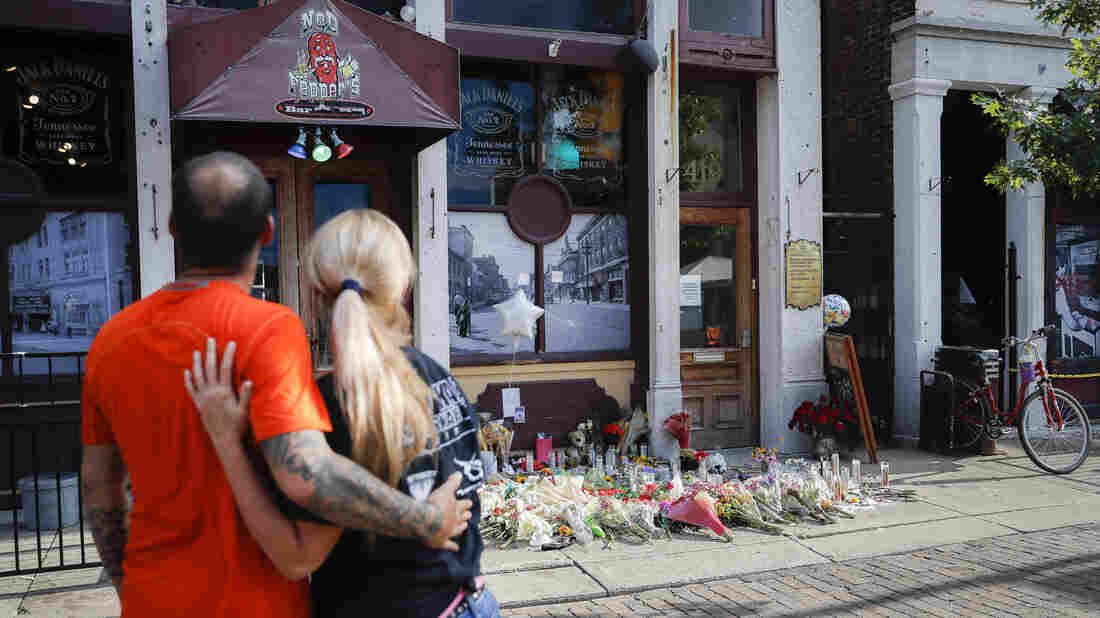 Mourners view flowers and other mementos left in honor of the people killed or injured during Sunday's mass shooting outside Ned Peppers bar in the Oregon District of Dayton, Ohio. John Minchillo/AP hide caption 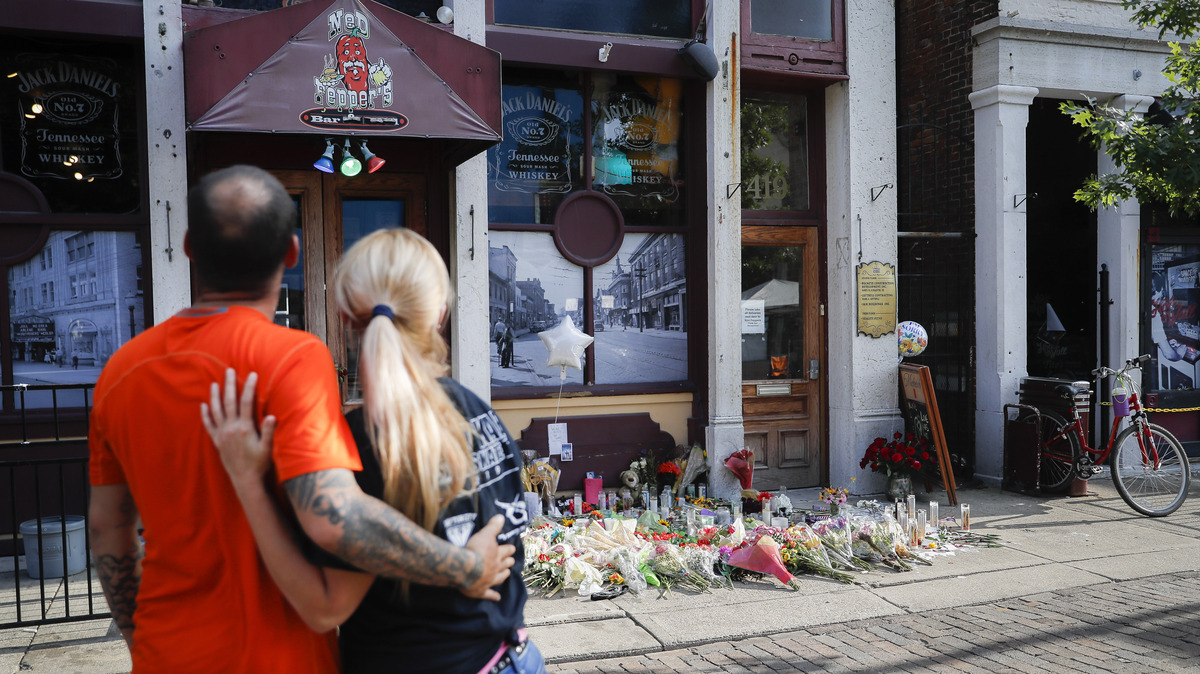 Mourners view flowers and other mementos left in honor of the people killed or injured during Sunday's mass shooting outside Ned Peppers bar in the Oregon District of Dayton, Ohio.

The deceased Dayton shooter bought his gun's receiver online and picked it up from a licensed dealer in Ohio, where the rest of the gun was assembled, according to Suzanne Dabkowski of the ATF's field office in Columbus, Ohio.

"Any other components that the individual would have purchased aren't regulated," Dabkowski said, because unlike the lower receiver, those components aren't considered firearms.

In Sunday's shooting in Dayton, the gunman fired dozens of rounds before being taken down within 30 seconds by police. Dayton Police Department Chief Richard Biehl said the gunman had the capacity to fire 250 rounds, given the ammunition magazines and loose ammo he was carrying.

The Dayton gunman's weapon was chambered to fire .223-caliber rounds, similar to the standard military round used in the M4 and M16 rifles. He was also wearing a bulletproof vest, hearing protection and a mask. He was shot and killed as he rushed to follow a crowd of people who were fleeing the sudden burst of gunfire. At the time, his AR pistol's drum still held dozens of rounds.

Occurring on the heels of another tragic shooting in El Paso, Texas, the violence quickly gave new urgency to the push to adopt new gun laws in a number of areas, from extensive and universal background checks to limits on ammunition magazines. It also prompted talk of reviving the federal assault weapons ban, which expired in 2004.

At a news conference Monday, Biehl was asked about the gunman's ability to easily acquire a powerful firearm that could send a barrage of bullets at throngs of people who had been enjoying a night out in Dayton.

"It's problematic," Biehl said. "It is fundamentally problematic to have that level of weaponry in a civilian environment, unregulated. It is problematic."

While Vince, the former ATF agent, criticized the current state of federal gun laws, he also said he doesn't think guns like the one used in Dayton should be outlawed.

"I really believe that the answer here is not banning these weapons," he said. Instead, he believes they should be registered, in the same way machine guns, short-barreled rifles, silencers and other items have been required to be registered under the 1934 National Firearms Act. Those items were singled out, the ATF says, because Congress deemed them "a significant crime problem."

Vince proposes a registration process that would require any American who wants to own an AR pistol or assault-style weapon to first pass a comprehensive background check. Citing the example of gangland-era machine guns, Vince said, "a person wanting one of these firearms really had to demonstrate that they weren't a person that had violent tendencies."

Weapons such as AR pistols pose a deadly challenge to law enforcement officers, Vince said, because in one compact package, they have the ability to fire a bullet that can penetrate many types of body armor, are easily concealed and can be fed by a high-capacity magazine.

"You talk about law enforcement being outgunned," he said. "This is ridiculous, what they have to face, when they carry a handgun."

After Mass Shootings, Other Nations Issue Caution About 'Gun Society' In U.S.

In the ATF's annual release of data on guns made in the U.S., it breaks down categories such as pistols and rifles. But the report doesn't specifically list numbers for receivers. Instead, they're classified as "miscellaneous firearms" — a category that includes other items such as pistol grip firearms and starter guns.

As for why AR pistols have caught on with gun enthusiasts, Vince said it's partly due to market forces in a country where there are now more guns than people.

"When you start to see the saturation of firearms in this country," Vince said, "the industry has to produce things that are different, that are going to make people want to buy something that they don't have. And that's what you're seeing here: It's to expand the market."

An earlier version of this story mistakenly said the mass shooting in Dayton, Ohio, happened on Saturday. It actually happened early on Sunday, Aug. 4.