Accessibility links
'The Ghosts Of Eden Park' Seems Fittingly Haunted By Prohibition Karen Abbott's page-turner teases with its central mystery, reaching its climactic final trial with a satisfying bang — though more on the politics of the time would have been a welcome layer.

'The Ghosts Of Eden Park' Seems Fittingly Haunted By Prohibition

'The Ghosts Of Eden Park' Seems Fittingly Haunted By Prohibition 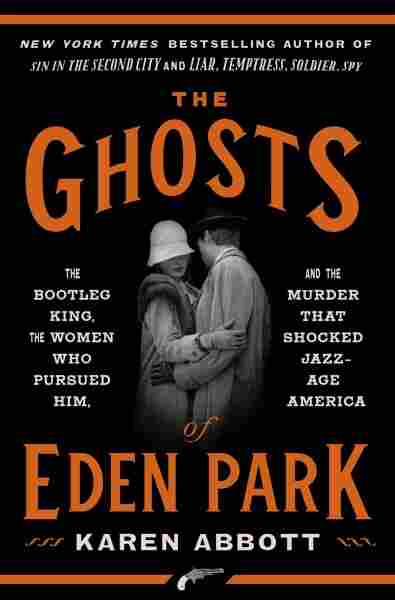 The Ghosts of Eden Park

The Bootleg King, the Women Who Pursued Him, and the Murder That Shocked Jazz-Age America

Title
The Ghosts of Eden Park
Subtitle
The Bootleg King, the Women Who Pursued Him, and the Murder That Shocked Jazz-Age America
Author
Karen Abbott

Karen Abbott's new historical true-crime book, The Ghosts of Eden Park, doesn't claim to center on Prohibition. In fact, it tries to keep to the main characters of its subtitle: The Bootleg King, the Women Who Pursued Him, and the Murder That Shocked Jazz-Age America.

But without that law, the crimes explored in the text wouldn't have occurred — making it feel fittingly haunted, much like a novel whose scenery is a central character (say, London in Charles Dickens' Bleak House).

The bootleg king of the title is George Remus, who was born in Germany but emigrated with his family to the U.S. when he was a boy. In the 1920s, he became for a short time the premier bootlegger in the country, circulating more than a third of all its liquor. He was actually a teetotaler and a rather honest criminal, refusing to water down his good liquor or mix it with toxic methanol, as other bootleggers did to make their product last longer. The women who pursued him are his second wife, Imogene, who started out dusting his floors before becoming his lover and then marrying him, and Mabel Walker Willebrandt, a hard-of-hearing lawyer appointed to serve as the assistant attorney general of the United States and, as Abbott writes, "the most powerful woman in the country" at that time.

And what of the murder? Well, Abbott has fun with this and won't tell you who killed whom until it happens. And, while you could google it, I'd recommend you let her twist and turn you about as you read through the tales of rags-to-riches, grasping opportunism, unclear morals, and government corruption.

There's a bit of a Law & Order structure to Ghosts, as Abbott sets up the events chronologically and at a sometimes dizzying pace — I wished in vain for a cast of characters section — and explores crime followed by trial, crime followed by trial. The story is fascinating indeed: We learn of Remus' marriage, his decadent bootlegging wealth and how he showed it off (once, memorably, by lighting his guests' cigars with $100 bills), and his downfall, brought about by one of Willebrandt's agents who turned out to be corrupt to the nth degree.

Yet for all the successful and suspenseful storytelling, much of it gleaned from a 5,500-page-long trial transcript, it's somewhat unclear who and what we're meant to believe. Early sections of the book detail Remus' violence towards his wife, Imogene, even as he lavished gifts upon her and entrusted her with substantial control over his assets. When she succeeded in getting at much of Remus' wealth while he was in prison, it's unclear whether it was revenge, opportunity, greed, or a new lover's influence that made Imogene do it. But the focal point of view is Remus', even as it becomes increasingly unclear what he lied about, where his real distress ended and his histrionics began, or whether we're meant to root for him.

All of this might well be by design, allowing readers to come to their own conclusions — but in order to do that, I personally needed more context about the time and place. I found this lacking, perhaps due to Abbott's eagerness at being able to include so much reported speech gleaned from the transcript, which she uses as if it were factual — a somewhat odd choice, seeing as how even if witnesses do tell the truth as they remember it, which in this case seemed doubtful in more than one instance, memory is fallible.

In some ways, Prohibition seems like a blip in the history of the United States, rarely discussed yet romanticized through fancy hidden bars that bill themselves as speakeasies and use 1920s décor and a secret password to sell overpriced cocktails. Yet the Volstead Act, which carried out the 18th amendment and established the prohibition of manufacture and sale of alcoholic beverages (with many loopholes and exceptions), was not merely an attempt to bring a drunken citizenry in line. As Harvard history professor Lisa McGirr wrote in The New York Times a few months ago, "powerful anti-immigrant hostility is what drove this monumental act of constitutional overreach." While this wasn't officially acknowledged at the time, Abbott shows it might as well have been: When criticizing the not-yet-Mayor La Guardia, who believed wholeheartedly in the amendment's anti-immigrant intentions, a Maine official openly said, "He's from New York, where there are few real Americans... He has the commonest of all foreigners for his constituents—Italian wine-bibbers who have sent him to Congress to recover for them their lost beverage."

I wanted more of this in Ghosts of Eden Park, a deeper understanding of the politics surrounding Prohibition as related to immigrants (like Remus himself), African Americans, and the Ku Klux Klan's use of the new anti-liquor laws to recruit members and terrorize "un-American" communities. But this might speak to my own sentiments regarding true crime and its ability to showcase the repetition of history.

As it stands, Karen Abbott's newest is a page-turner, teasing readers with its central mystery, and reaching its climactic final trial with a satisfying bang.

Read an excerpt of The Ghosts of Eden Park