Accessibility links
Smokey Bear Turns 75: See How His Image Has Changed The longest-running public service campaign is tied to a reduction in wildfires, but in some ways Smokey's message may have worked too well. Here's how he's changed. 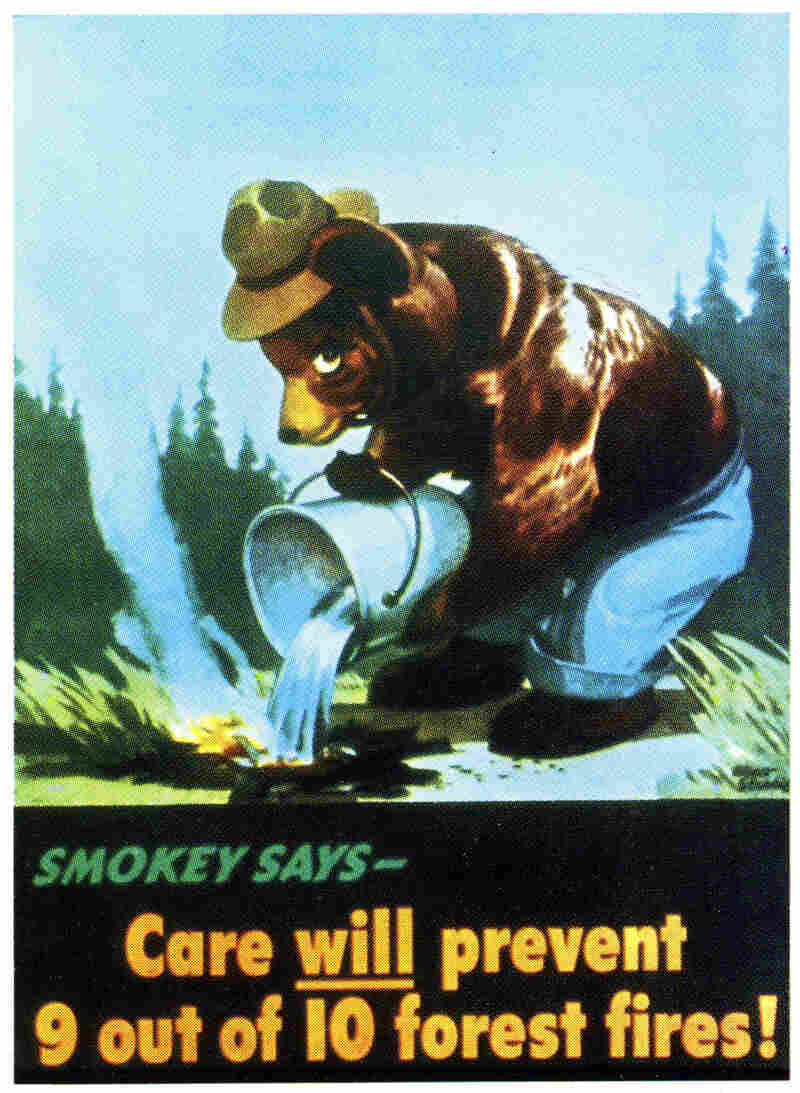 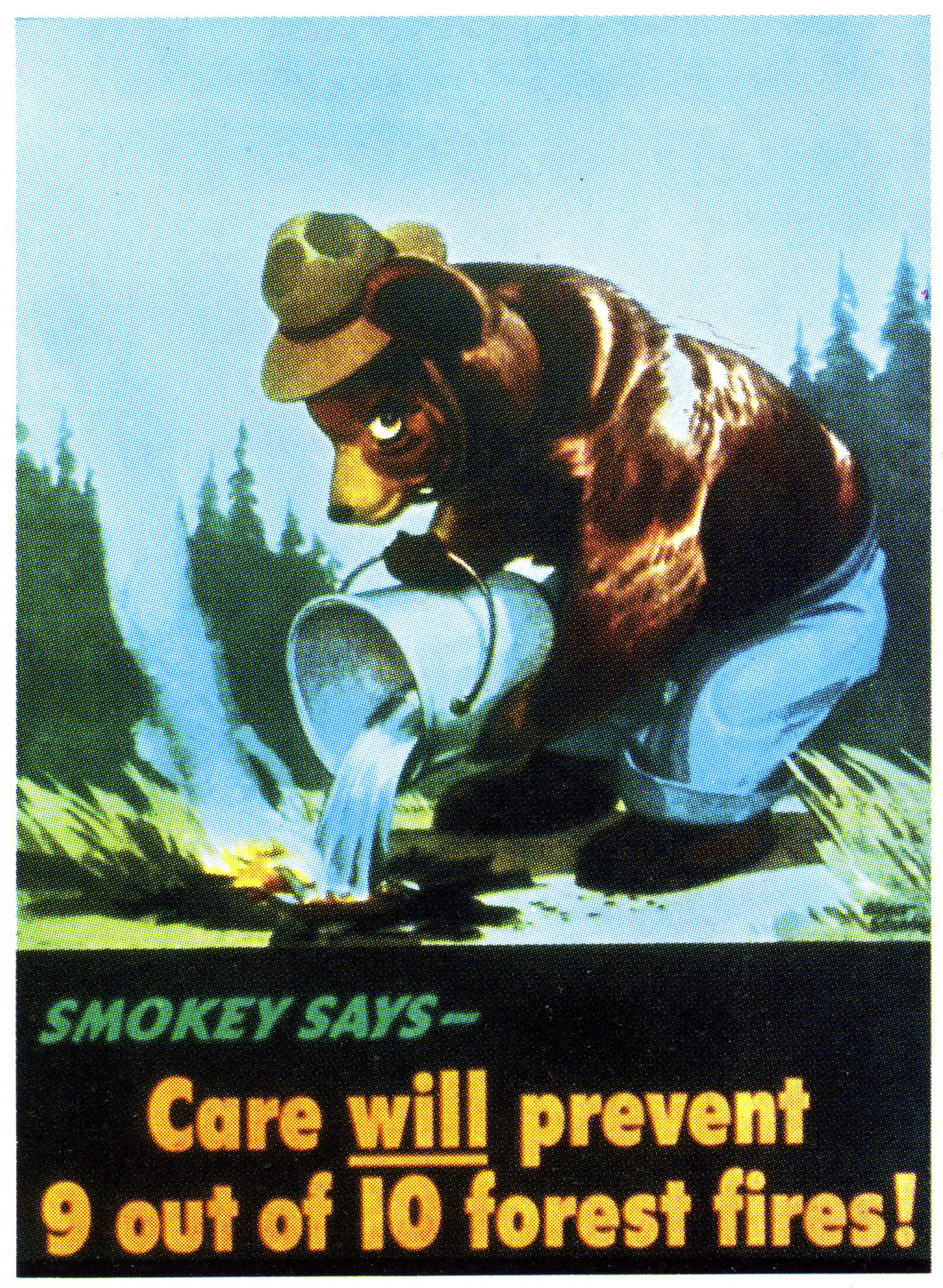 While his look has changed quite a bit, his message has shifted only slightly.

Smokey's roots go back further than his first post. In 1942, a Japanese sub attacked an oil field in southern California.

Next to the oil field was the Los Padres National Forest, and officials worried about the effect on the war effort if the forest itself had been attacked. So the War Advertising Council developed a campaign to warn of the danger of forest fires.

"The original posters were quite scary in nature," said Wendy Melillo, an American University professor who has written about Smokey. "So they had the face of a Japanese soldier with a lighted match and a menacing grin and a slogan that said, 'Careless matches aid the Axis.' "

When the war ended, the Forest Service needed a new way of conveying the danger of forest fires. At first they used Bambi, but Disney controlled that character.

The Ad Council then hired artist Albert Staehle, who brought us Smokey. 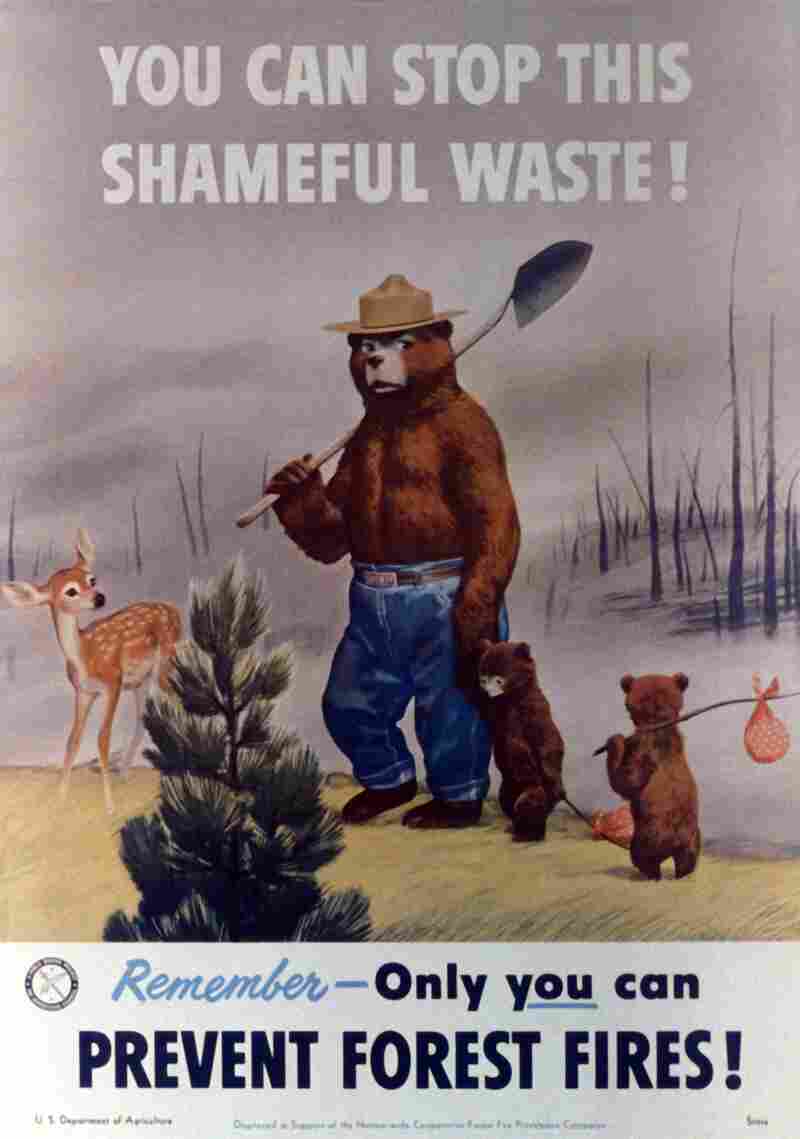 Smokey's look had changed by 1951; he gained a shovel and a stronger demeanor than his softer first appearance. The Ad Council hide caption 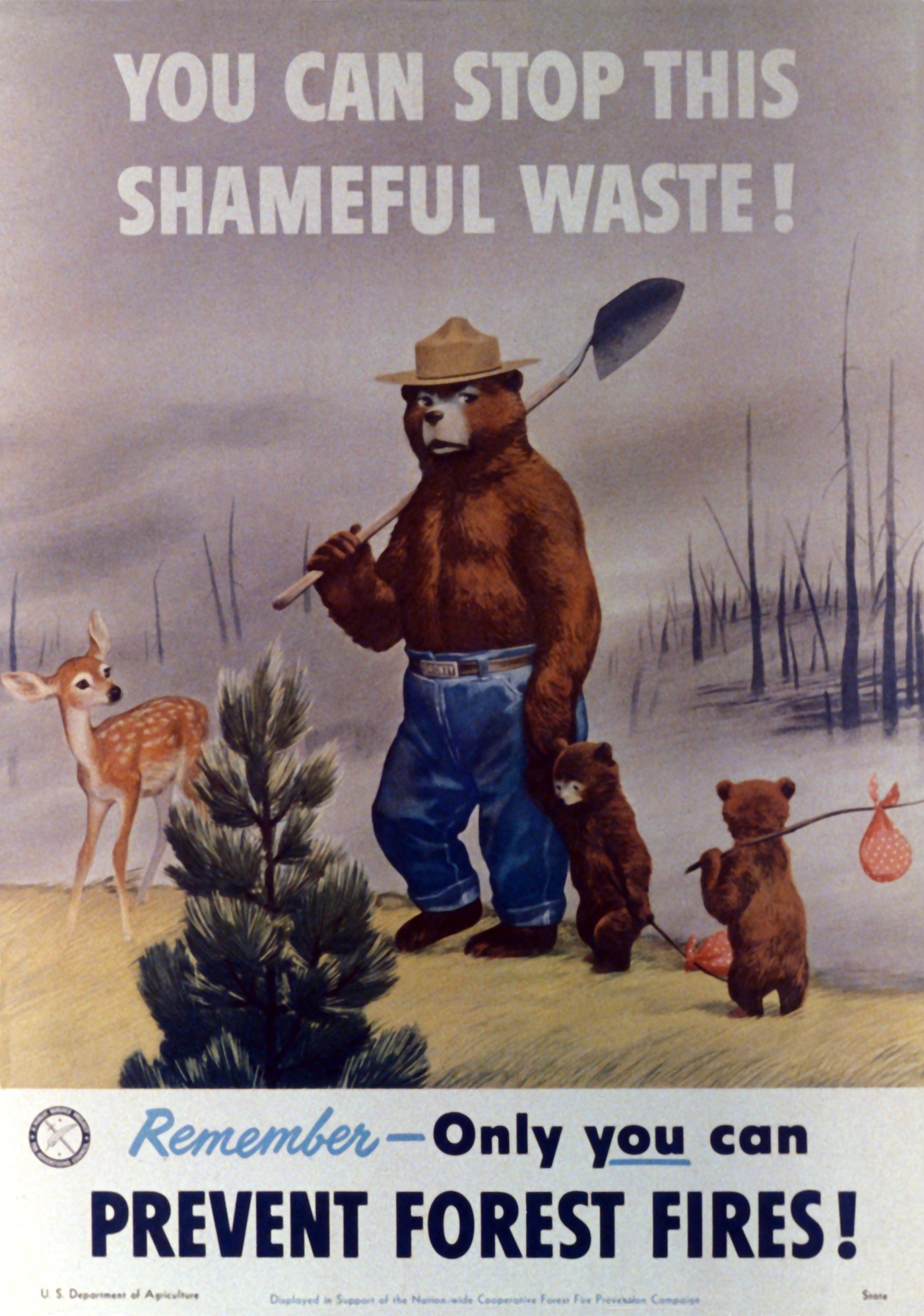 Smokey's look had changed by 1951; he gained a shovel and a stronger demeanor than his softer first appearance.

"The Forest Service wanted, you know, something strong," Melillo said. "But it wanted it animated to be appealing ... to children and families. And so the first Smokey is a really sweet looking bear with a pair of jeans on and he's holding a bucket of water and he's pouring it over the campfire."

Melillo said the image of Smokey evolved over time, including picking up a shovel, leading to an image of what she called "the classic Smokey that has endured throughout the campaign."

In the 1950s, the Forest Service and the Ad Council began producing public service announcements to run on radio stations with a song which — for rhythmic reasons — placed a "the" between "Smokey" and "Bear," and pairing him with some famous celebrities, like Roy Rogers.

And a short film, featuring the character Hopalong Cassidy, told the story of a real life bear cub, who survived a New Mexico forest fire and was flown to Washington where he took residence at the National Zoo, and who was named — what else? — Smokey. 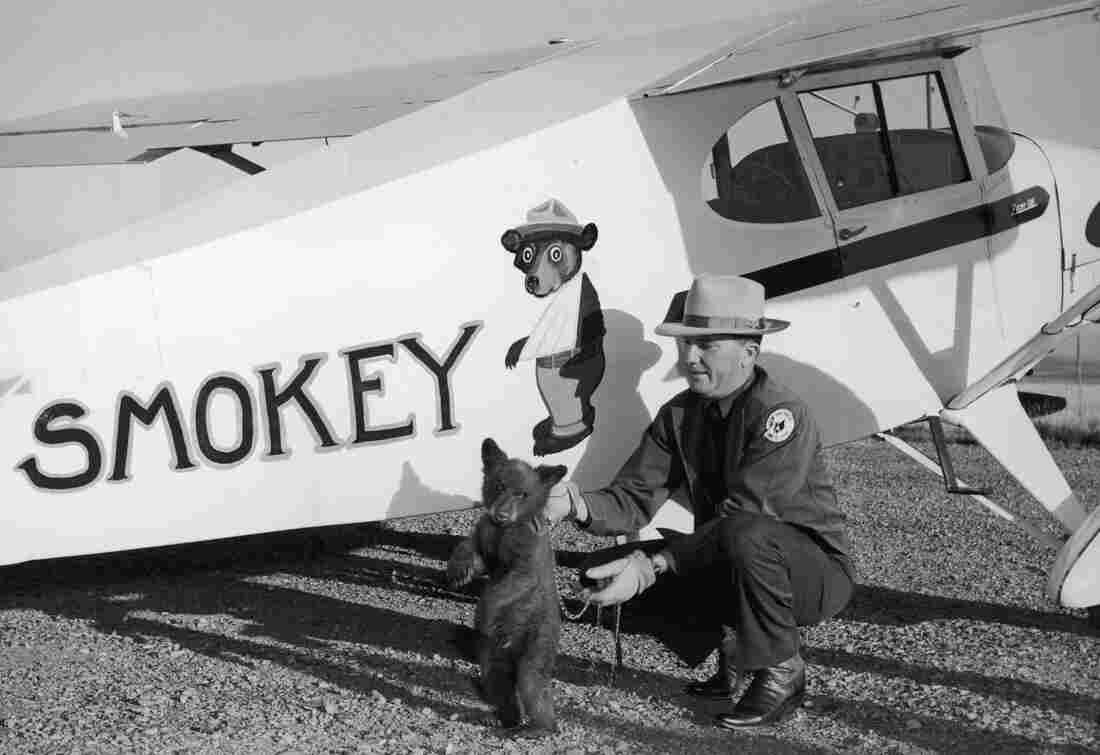 Smokey the bear cub is flown from Santa Fe, N.M., to his new home at the Washington National Zoo by New Mexico's Assistant State Game Warden Homer C. Pickens in 1950. The little bear was rescued from a forest fire and named Smokey after the fire prevention symbol of the U.S. Forest Service, which launched in 1944. FPG/Hulton Archive/Getty Images hide caption 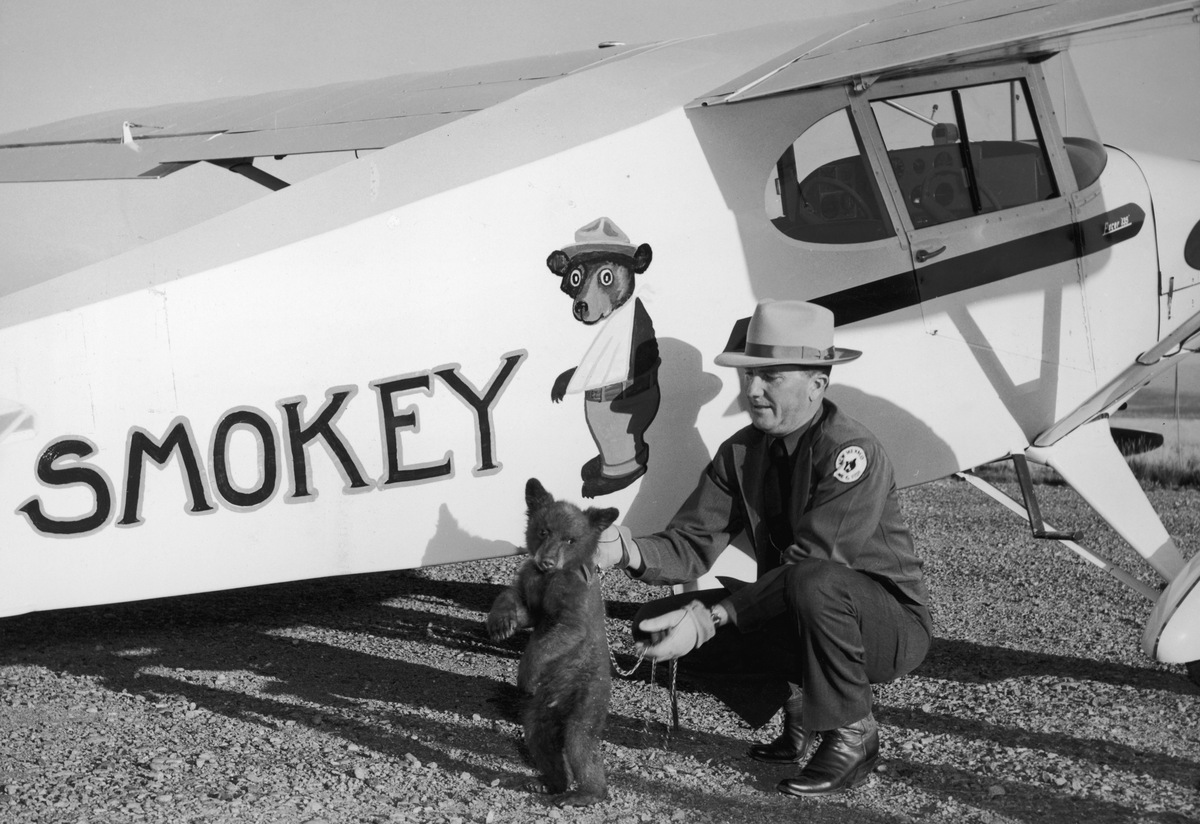 Smokey the bear cub is flown from Santa Fe, N.M., to his new home at the Washington National Zoo by New Mexico's Assistant State Game Warden Homer C. Pickens in 1950. The little bear was rescued from a forest fire and named Smokey after the fire prevention symbol of the U.S. Forest Service, which launched in 1944.

The Smokey campaign has continued to evolve. Melillio said Smokey was given his own ZIP code in the '60s, where people could send mail to the cartoon character. Even "the occasional pot of honey would be sent to Smokey."

Smokey's popularity has certainly endured. But has Smokey been too successful?

The number of forest fires since the Smokey campaign began has declined, Melillo said. But in recent years, they've gotten larger and more destructive. And scientists talk about "the Smokey Bear effect," the belief that all fires are bad.

"We still need fire in our landscapes, and this is incredibly important, and it's very hard to understand," says University of Colorado-Boulder geology professor Jennifer Balch. "In part because of Smokey, you think that, you know, all fire is bad and we must remove fire from the landscape, whereas that's actually not what we should be doing." 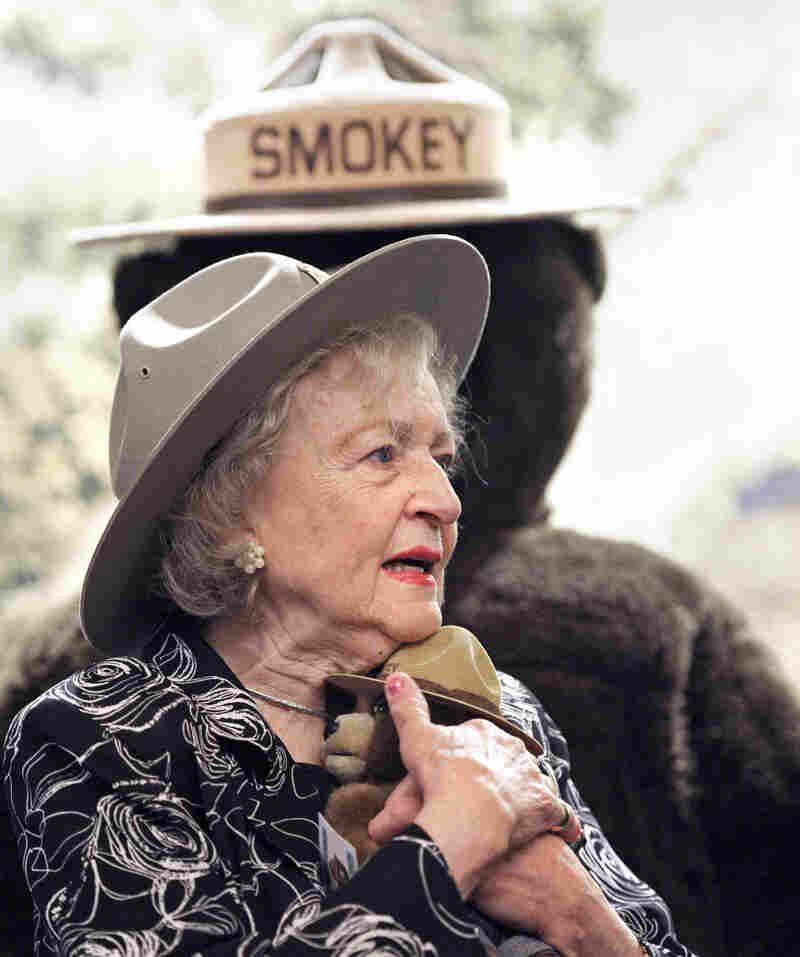 Actress Betty White is named an Honorary Forest Ranger by the U.S. Forest Service in 2010. Her voice is featured in a special video for Smokey Bear's 75th anniversary. Cliff Owen/AP hide caption

Balch says because there have been fewer fires, more fuel has built up, which combined with climate change and more people living near what were previously wilderness areas, has led to more intense and devastating fires, such as the one that destroyed the town of Paradise, Calif., in November 2018.

Smokey's tag line was revised in 2001 to, "Only you can prevent wildfires," rather than "forest fires."

And the campaign continues. Smokey has a website, and Twitter and Instagram accounts. New TV spots feature talking emojis and celebrity voices, including Betty White's and Stephen Colbert's — "because after 75 years of 'Only you can prevent wildfires,' turns out there's much more to say."

And who's to say the fire-preventin' bear won't be around in another 75 years?

Previous audio and Web versions of this story incorrectly stated that the 1942 attack on an oil field in Southern California was the only Japanese attack on the mainland in World War II. It was not the only attack. Additionally, in the audio version the Los Padres National Forest is incorrectly referred to as Los Alamos National Forest.