Accessibility links
Arrivals At Hong Kong's Airport Get 'Travel Warning' From Protesters Hundreds of pro-democracy activists, clad in black T-shirts and wearing face masks to hide their identities, thronged the city's airport in hopes of bringing international attention to their cause.

Arrivals At Hong Kong's Airport Get 'Travel Warning' From Protesters

Arrivals At Hong Kong's Airport Get 'Travel Warning' From Protesters 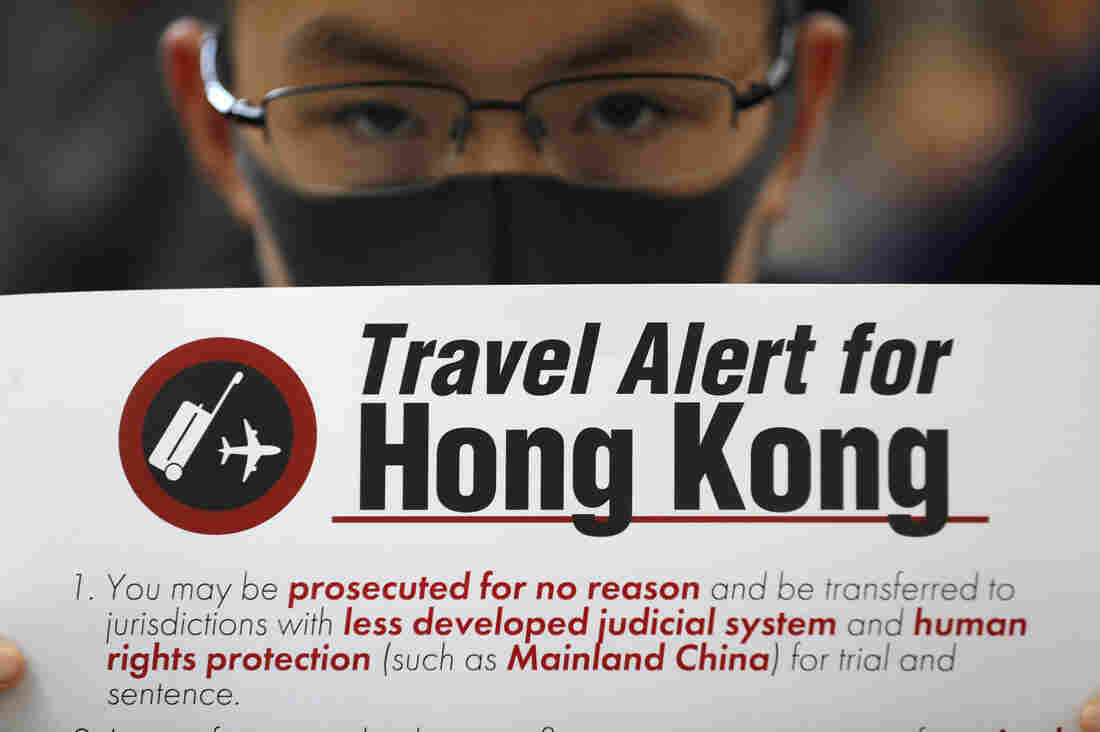 A pro-democracy protester holds up a banner waning travelers at the airport in Hong Kong on Friday. Vincent Thian/AP hide caption 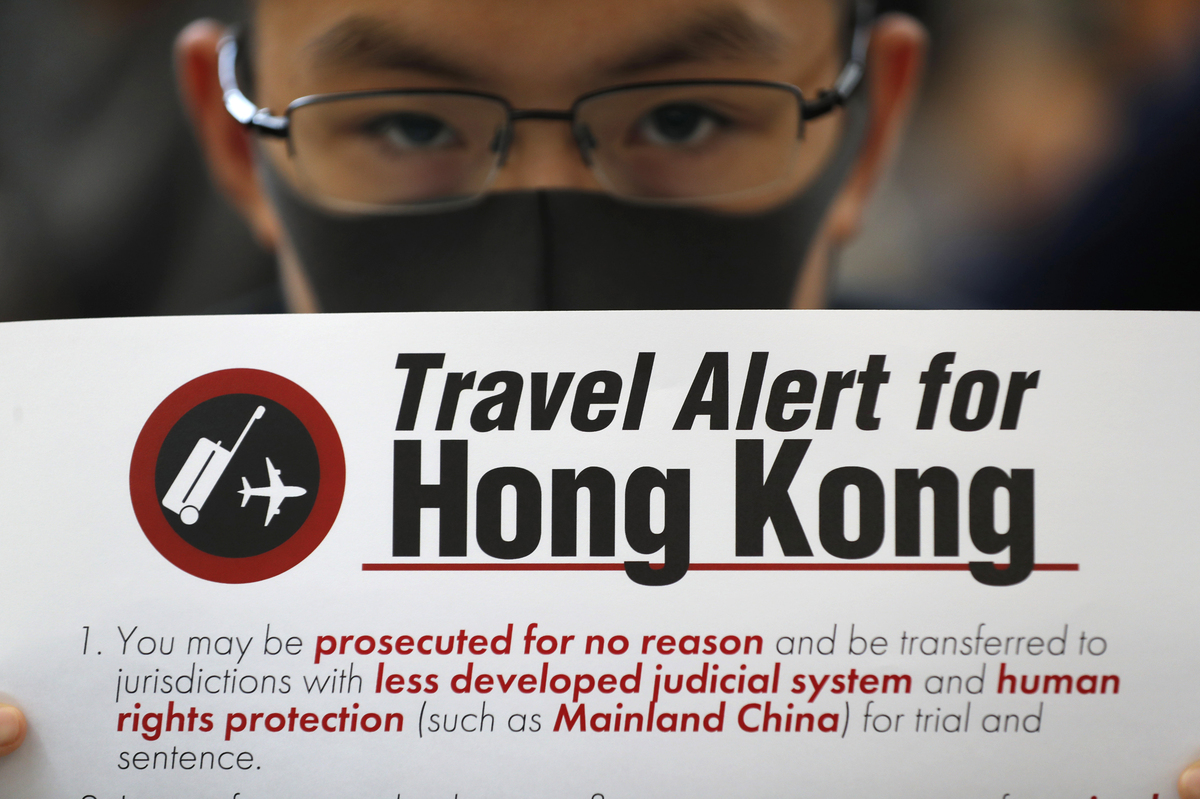 A pro-democracy protester holds up a banner waning travelers at the airport in Hong Kong on Friday.

Hundreds of protesters in Hong Kong waved banners and passed out anti-government leaflets to passengers arriving at the city's airport, as they sought to bring international attention to their campaign for greater freedom in the Chinese territory.

"Dear travelers," some of the flyers read in English, "Please forgive us for the 'unexpected' Hong Kong. You've arrived in a broken, torn-apart city, not the one you have once pictured. Yet for this Hong Kong, we fight." The leaflets were passed out by mostly young protesters clad in black T-shirts, with many wearing face masks to hide their identities from authorities.

The latest protests at Hong Kong International Airport follow weeks of often violent demonstrations that have challenged the city's government and its overseers in Beijing in a way not seen since the former British colony was handed back to China in 1997.

Those demonstrations prompted the U.S. State Department on Thursday to issue a travel advisory, cautioning Americans to "exercise increased caution in Hong Kong due to civil unrest." Australia and Canada issued similar advisories.

Also on Thursday, a State Department spokesperson expressed anger at China for "leaking" a photograph of a U.S. diplomat speaking with prominent Hong Kong pro-democracy activist Joshua Wong in a hotel lobby. The photograph along with the personal details of political counselor Julie Eadeh were published in a pro-Beijing newspaper in Hong Kong under the headline "Foreign Forces Intervene."

"I don't think that leaking an American diplomat's private information, pictures, names of their children, I don't think that is a formal protest, that is what a thuggish regime would do," State Department spokeswoman Morgan Ortagus said.

The photograph is likely to add fuel to China's narrative that the U.S. is behind the Hong Kong protests, which began in June as a reaction to a proposed law allowing people accused of certain crimes in Hong Kong — which maintains its own legal system — to be sent to face justice in mainland China.

Although the Hong Kong government backed off the extradition bill, activists have insisted it be killed altogether. They have also added to their list of demands, reviving grievances from 2014 protests such as direct elections for Hong Kong's chief executive and Legislative Council.

One flyer distributed by protesters at the airport purported to announce a "Travel Alert for Hong Kong." It warned international arrivals to beware: "You may be prosecuted for no reason and be transferred to ... Mainland China for trial and sentence."

As the demonstrations have dragged on for more than two months, the patience of authorities and the local business community appears to be fraying.

Earlier this week, Hong Kong's chief executive, Carrie Lam — who had earlier described the protesters as "rioters" — warned that the city was "on the verge of a very dangerous situation."

So far, Beijing has shown restraint, preferring to let Hong Kong handle its own protesters. But Yang Guang, spokesman for Beijing's Hong Kong and Macau liaison office, warned on Tuesday that "those who play with fire will perish by it." He said that Beijing possessed "tremendous power" to deal with the protests.

The developers said: "Such acts have deviated from the original intent of the peaceful demonstrations and are bringing distress to the business community and the general public as a whole."

One airport demonstrator, Charlotte Lam, 16, was quoted by Reuters as saying she thought the protest would remain peaceful "as long as the police do not show up."

She said activists had printed stickers and banners in more than 16 languages. "We want to spread our message internationally," she said. "We are not rioters, we are a group of Hong Kong people fighting for human rights and freedom."