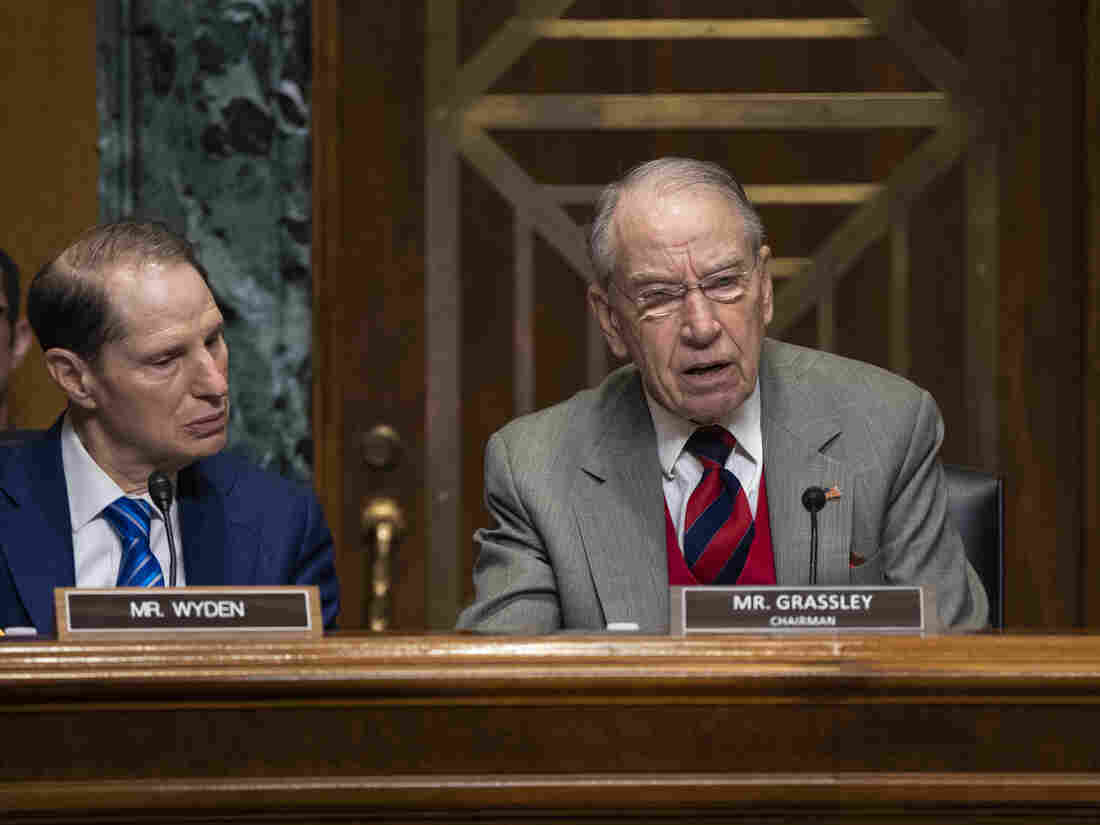 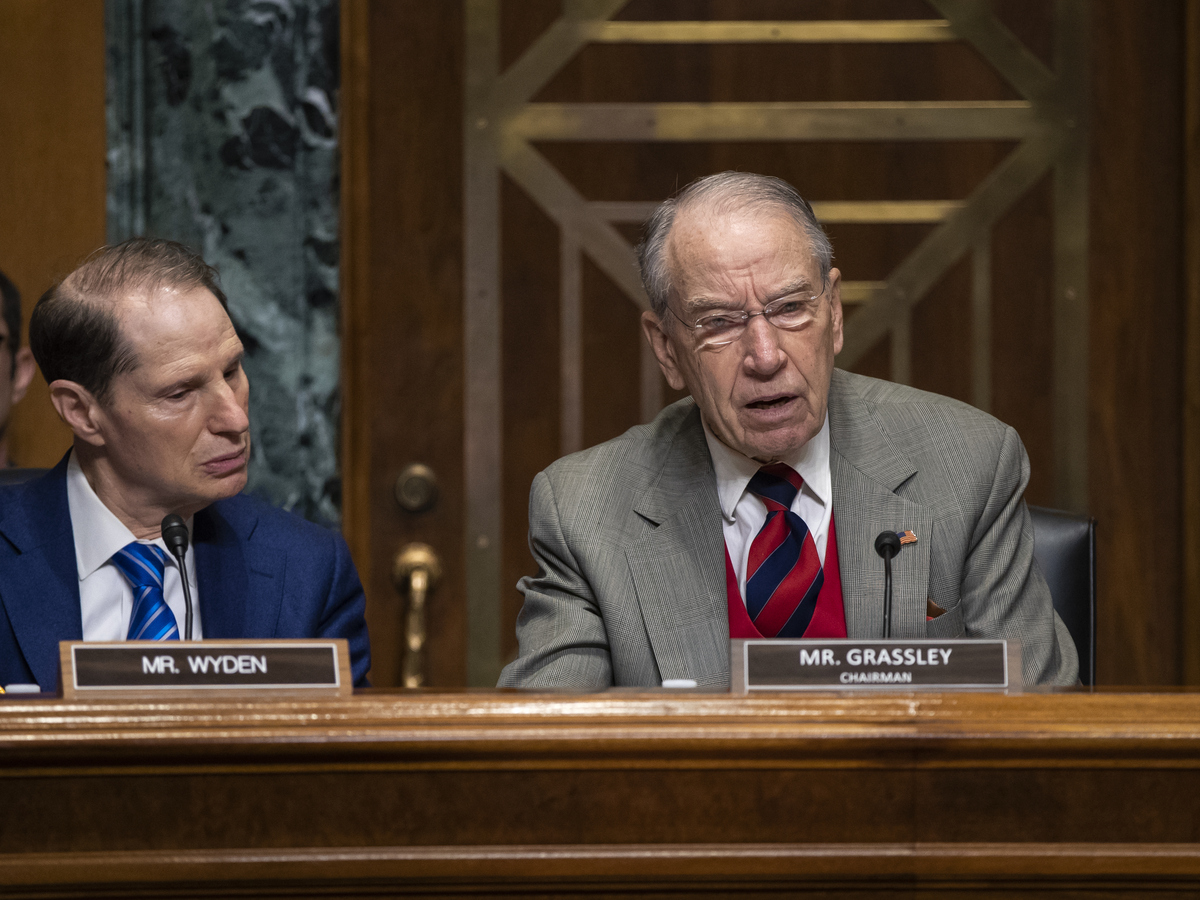 Senate Finance Chairman Chuck Grassley, R-Iowa, is joined by Sen. Ron Wyden, D-Ore., the ranking member, at a hearing on the high price of prescription drugs.

Back home in Iowa for the August recess, Senate Finance Chairman Chuck Grassley is making the case in this conservative state for a sweeping drug bill, even though many in his party do not support it.

"One of the few times, if it isn't the only time, that I've been chairman of various committees that I haven't had at least a majority of Republicans on my side," Grassley conceded at a town hall meeting in Aurelia this week, but he added: "It's probably more valuable to have the president on your side."

For 39 years and counting, the Republican senator has traveled to all 99 counties in his home state every year to meet with constituents, and this year the high cost of prescription drugs has come up in nearly all of them.

It's why Iowans like Allan Yeager showed up, to hear more about plans that could help his family, where his wife has faced high out-of-pocket drug costs. "She's a severe diabetic, she had gastric bypass. When we retired she got a bonus and they were used up like that," he told NPR.

Grassley's bill to reduce seniors' out-of-pocket costs and limit drug price increases under Medicare is popular here, among dozens of older Iowans. But it was also met by skepticism by Iowans like John Comstock, who told the senator he's not convinced Congress could actually get it done. "Based on coming out of committee, with not having total Republican support, what do you feel in your gut and experience is the chances of that passing are?"

As Grassley tells it, the fact that nine of the Senate Finance Committee's 15 Republicans voted against his bill in July is a good sign for what comes next. "If you just looked at doing something in Washington with having every Republican on my side before you can move ahead, we wouldn't get much done, and it takes a lot of bipartisanship in Congress to get things done," he told the crowd.

In order to get a prescription drug bill that has a shot at overcoming a filibuster, Grassley started working with the top Democrat on the committee, Ron Wyden of Oregon, back in January. Last month, they unveiled legislation that will limit out-of-pocket costs for seniors in Medicare's Part D prescription drug program to $3,100 per year starting in 2022.

"It's going to give peace of mind to people," he said.

Grassley got it through committee over the objection of a majority of Republicans, but every Democrat voted for it. Those Republicans opposed it on free-market grounds, because the plan includes price controls on the pharmaceutical industry, limiting their ability to raise drug prices faster than the rate of inflation.

Grassley told NPR in an interview that he is unmoved by this argument and shrugged off Republicans "complaining" about it. The government will not set prices, he argues, "there's just got to be a limit to what they can increase it year over year." He knows he's unlikely to win over many opponents, especially with support from the drug industry, which opposes his bill.

"Not very often is Big Pharma taken on, and this is something they just don't like, and they've got plenty of friends in politics," he said. Grassley is facing an uphill battle against some in his own party, the powerful drug lobby, and a Senate majority leader who does not like to bring bills to the floor that divide the party on core issues like government regulation of markets.

Grassley said he's got other factors working in his favor, including 22 Republicans up for reelection in 2020. "Every one of them are asking me to do something about the high cost of prescription drugs because it's a big issue in their campaign," he said.

Lowering drug costs is a top 2020 campaign priority for the Trump administration. Trump wants a win, and in order to get it, his administration has also indicated a willingness to buck party orthodoxy. It praised Grassley's plan when it came out of committee. However, Grassley said the president is going to have to do a lot more to persuade Republicans. "I think the president is going to personally have to get involved, and I'm told he will get involved when that time comes."

Grassley wants the Senate to take up the drug debate this fall, ahead of the election year. He and other Republican chairmen are working with top Democrats to try and meld a number of health care cost-cutting bills to make it as politically appealing to as many senators as possible.

He said he doesn't see his efforts as bucking the party on health care. He's trying to help it politically, too. "Fourteen percent more people feel like Democrats are better for them on health care than we Republicans are. It might help narrow that."

Back home in Iowa, Grassley makes no apologies for working with Democrats to pass his bill. "That's my reputation, and that's how I get things done," he said.