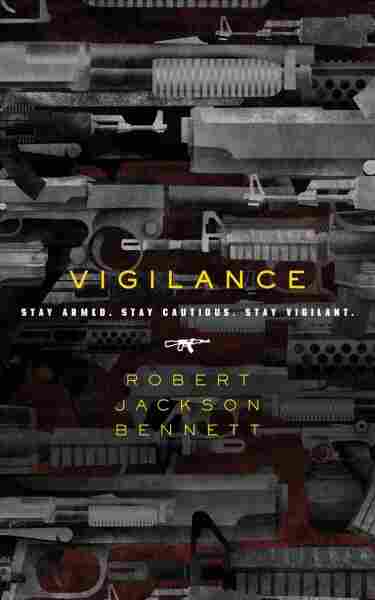 Robert Jackson Bennett has a wicked sense of humor. His 2013 novel American Elsewhere trained a satirical eye on small-town America even as it straddled the boundaries of science fiction and horror. Yet with his latest work, a novella called Vigilance, the Austin-based author and two-time winner of the Shirley Jackson Award tackles one of the most deadly serious — and sadly relevant — topics of all: mass shootings. As in American Elsewhere, there's both science fiction and horror in Vigilance. There's also that wicked Bennett sense of humor. He spares no disturbing absurdity or twinge of cognitive dissonance in his examination of gun mania and the new normal of everyday massacres in America.

Make no mistake: For all its satire of government, entertainment, society, and violence, Vigilance is a sobering read. It takes place just a few years in our future, in a United States that's simultaneously unrecognizable and chillingly familiar. Texas is in flames. The governor of Iowa is an open white supremacist. Warfare has become almost entirely remote, done with robots and drones, so that the bloodlust and sense of martial duty fostered in people by American society — as well as the noble, heroic ideal of the valiant solder — has nowhere to be vented or expressed. And the younger, more liberal generation has almost entirely fled the United States for other nations with stricter gun control, leaving the older, more gun-favoring population behind.

If you draw a straight line from where we are now to where we might be in a generation, 'Vigilance' doesn't seem all that implausible.

What that population has done is blood-curdling. John McDean is a producer for a popular television show called Vigilance, in which mass shootings are broadcast for public consumption to those who wish "to witness violence and fear, but always from safe refuge." His target demographic is the American pistol-owner. As McDean coldly, cruelly calculates, "Pistols are for killing people. Pistols are for urban environments. Pistols are for defense." They are the perfect choice of what McDean calls his Ideal Person, "isolated within a huge suburban house, wary and suspicious of the outside world, listening to the beautiful woman on the television warn them of horrors and depravity in the lands beyond the borders, of corruption creeping into our cities."

If that sounds like Donald Trump's America to you, it's no accident. If you draw a straight line from where we are now to where we might be in a generation, Vigilance doesn't seem all that implausible. Domestic terrorism, white nationalism, self-radicalization, the fetishizing of firearms — it's all what we've been dealing with, yet again, in the aftermath of the back-to-back massacres in Dayton and El Paso. But the most horrifying part of Vigilance is how desensitized to all this our country has become just a few short decades from now. Delyna, a waitress at a tavern, is the conscience of Vigilance, of Bennett's skewed world that's too much like our own. She recoils at the worship of guns and violence, but even more, she recoils at the unspoken status quo of it all.

An Old Soldier Is Back In Action In 'City Of Miracles'

Bennett says he was inspired to write Vigilance not only by the sickening regularity of mass shootings, but by the inaction that always seems to follow. "I noticed that mass shootings created a lot of news media sensation and social media communication, and my feeling was that if a repeated event creates a lot of talk, and yet inspires no actual change, it is not a tragedy, but is instead spectacle," he told me in an interview. "It's a marketing and media opportunity more than it is an impetus for action, so it made a perverse sense to view the subject as just that, and turn mass shootings and the lives and deaths of countless innocent people into a reality television game show. Because we're not going to do anything. We're just going to watch."

"It's such a horrible and absurd phenomenon that it was ripe for satire, but I admit, reality these days has an awful ability to hew close to satire," he added. "Mass shootings are so common these days, and each one feels so similar, that they're just variations on a theme. To be honest, life in 21st-century America means that unless the mass shooting either kills someone you know or occurs in your backyard, you'll forget about it in a week."

Bursting with sharp insights and savage anger, Vigilance is disturbing and in no way palliative. It's also grimly clever, searingly relevant, and maybe even necessary. And it's not something you'll forget anytime soon.