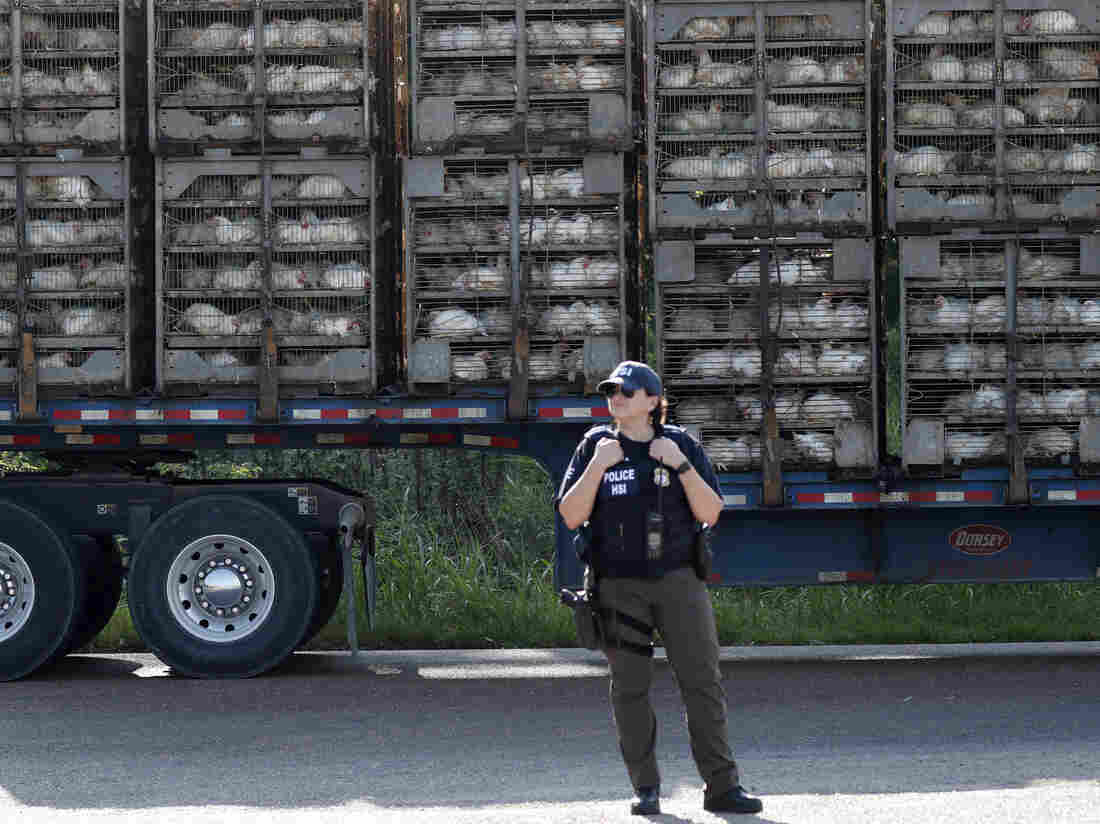 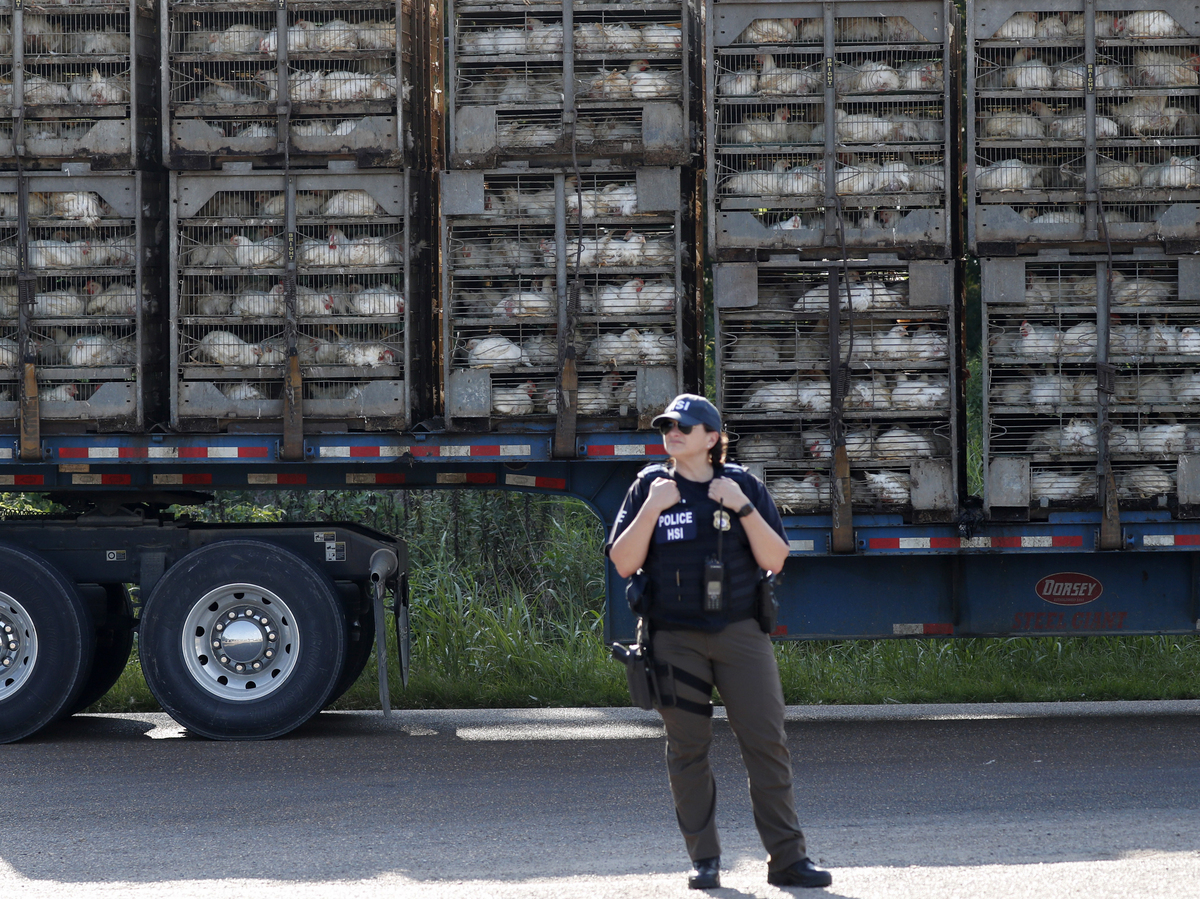 A trailer loaded with chickens passes a federal agent outside a Koch Foods plant in Morton, Miss., on Wednesday.

Federal agents carried out one of the largest immigration raids in recent history this week, arresting nearly 700 workers at chicken processing plants in Mississippi.

But you can still buy a rotisserie bird at your local supermarket tonight for less than $10.

So far, the government crackdown has had little effect on the wider food processing industry, a dangerous business that is heavily reliant on immigrant labor.

Some 300 Arrested In Mississippi Immigration Raids Have Been Released, Officials Say

"Americans really need to think about where their chicken and where their beef and their pork comes from and really demand that the industry raise labor standards," says Debbie Berkowitz, who directs a health and safety program at the National Employment Law Project.

Authorities raided seven Mississippi poultry plants on Wednesday, arresting 680 people suspected of living in the country illegally. So far, no charges have been brought against the five companies that run the plants, although federal officials say that could change as the investigation is ongoing.

The Trump administration has focused considerable resources on workplace immigration probes. Investigations and audits more than tripled last year, and arrests of workers rose even more. But there was no comparable increase in the number of employers cited.

"These enforcement actions are always aimed toward the workforces," says Ted Genoways, whose 2014 book, The Chain, focuses on the food processing industry. "No one ever seems to ask how it is that a company comes to employ a factory full of people who do not have legal immigration status."

Genoways says that is reminiscent of other high-profile raids on a meatpacking plant in Postville, Iowa, in 2008 and at half a dozen Swift plants in 2006.

"In all those cases, there were work stoppages, huge numbers of people swept up, families divided, but little to no consequences for the people who did the hiring," he says. "And those plants were back up and in production in fairly short order."

Koch Foods, one of the companies raided in Mississippi this week, said in a statement that it closed for one shift on Wednesday but planned to keep operating to "minimize customer impact." The company also advertised a hiring fair in Mississippi next Monday and advised job applicants to bring two forms of ID.

Koch Foods (no relation to Charles and David Koch, the majority shareholders of Koch Industries) — paid nearly $4 million last year to settle a complaint brought by the Equal Employment Opportunity Commission. Latina workers at the company's plant in Morton, Miss., accused the company of both racial and sexual harassment. The company admitted no wrongdoing.

Another of the companies raided this week, Peco Foods, had two workers suffer amputations last year at a chicken processing plant in Arkansas.

The chicken industry boasts that its processing plants have gotten safer. The rate of workplace injuries was cut by half between 2003 and 2016. But poultry workers are still twice as likely to suffer serious injuries and six times as likely to contract a workplace illness as other private sector employees.

Berkowitz, who was chief of staff at OSHA during the Obama administration, says those numbers are likely understated, because of declining government inspections.

"The industry is totally dependent on finding workers who will not raise issues and who, to a degree, live in fear of the company and they'll just keep their head down and do the work," Berkowitz says. "For the last 30 years that's been immigrant labor."

A quarter-century ago, journalist Tony Horwitz documented the miserable conditions in a chicken processing plant in a Pulitzer Prize-winning story for The Wall Street Journal. Industry observers say little has changed since then.

"On a good day, the work is repetitive and stressful," Genoways says. "On a bad day, if there's a single mistake made by anyone in a group, there's a high risk of accident."

If anything, the pressure on workers has only increased, as processing lines move ever faster.

"Meatpacking remains one of the most dangerous jobs in America," Genoways says. "And because of that, for really more than a century it's been a job that's very often done by first-generation immigrants who are just looking for a foot in the door and a way up the economic ladder in America."