When author Andrea Davis Pinkney decided to write a book about a sit in, her husband Brian Pinkney asked, "How am I going to illustrate this, Andrea? They're just sitting." She told him: "Well, honey ... I'm sure you'll think of something." And he did. The lunch counter in Sit-In "takes on a life of its own," she says: It's a roller coaster, it's a road, it's a character in the story. Little, Brown Books for Young Readers hide caption

When author Andrea Davis Pinkney decided to write a book about a sit in, her husband Brian Pinkney asked, "How am I going to illustrate this, Andrea? They're just sitting." She told him: "Well, honey ... I'm sure you'll think of something." And he did. The lunch counter in Sit-In "takes on a life of its own," she says: It's a roller coaster, it's a road, it's a character in the story.

Andrea Davis Pinkney and Brian Pinkney are literally the couple that met at the copy machine. They attended business events, went out to lunch, and from there, "we started sharing about our lives," Brian says. He was an illustrator, she was a writer, and "We thought, wow, we could really do some amazing things together."

The Pinkneys have now been together for 30 years, and in that time, they've collaborated on nearly 20 children books. Their latest is Martin Rising: Requiem for a King, a series of documentary poems chronicling the final days of Martin Luther King, Jr.'s life — written by Andrea and illustrated by Brian. 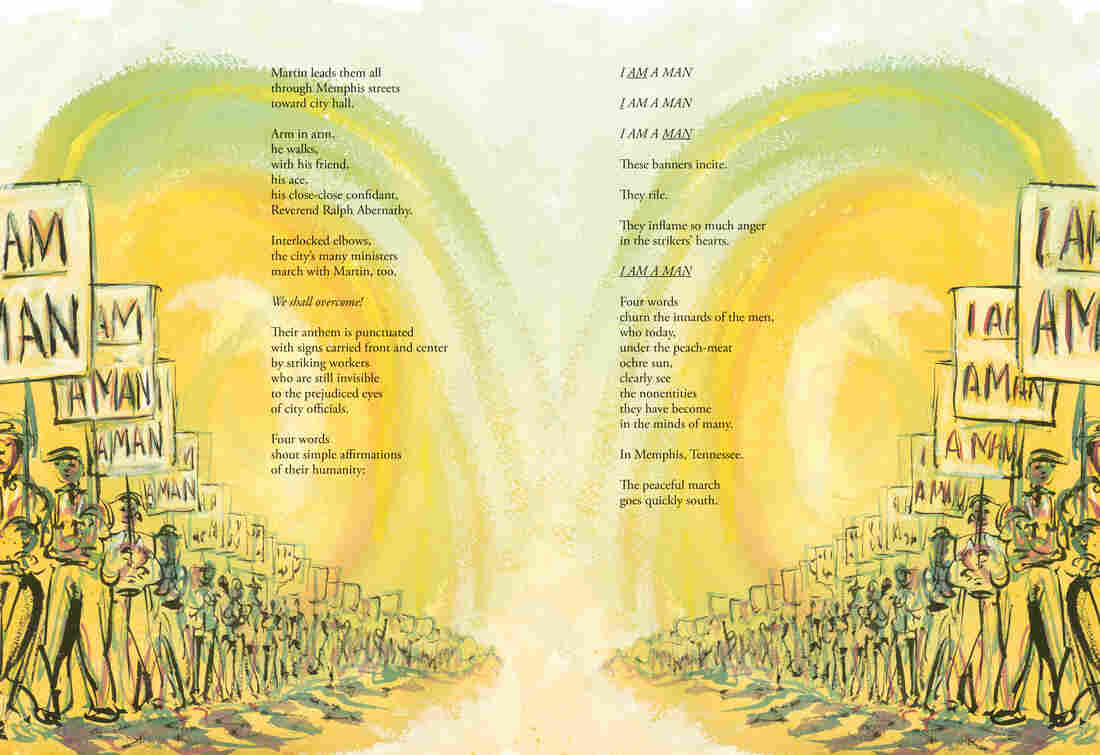 Brian Pinkney says he wanted the illustrations for Martin Rising to be poetic — "almost like visual poetry." Scholastic hide caption

The early days of their relationship were ... interesting, Andrea says. Brian had been working on a book about a mermaid and he needed someone to model for him. "I had her lay across a dining room table so I could get the angle just right — like she was swimming underwater," he recalls.

"Can you imagine? ..." Andrea says. "I didn't know what I was getting myself into at that point."

Brian had a model for what a creative family looked like — his father is Caldecott medal winning illustrator Jerry Pinkney. His mother, Gloria Jean Pinkney, is a silversmith, a milliner and a children's book author. "I would see my parents — how they got along, and how they communicated together — and it looked like I could probably do that," Brian says. 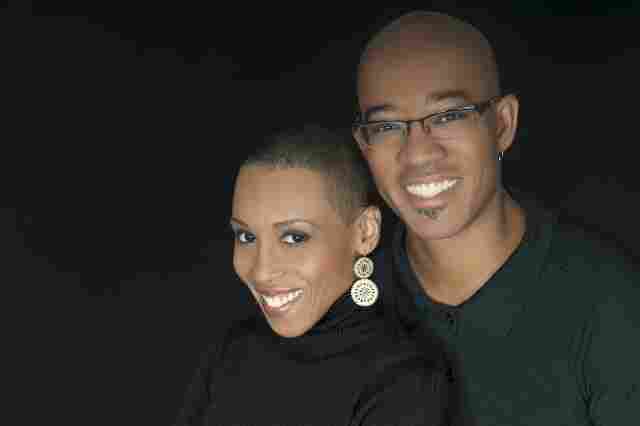 Author Andrea Davis Pinkney and illustrator Brian Pinkney have been a couple for 30 years, and worked on nearly 20 books together. Christine Simmons/Scholastic hide caption 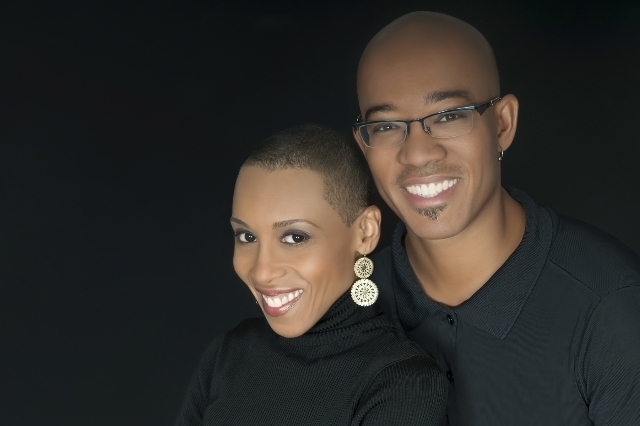 Author Andrea Davis Pinkney and illustrator Brian Pinkney have been a couple for 30 years, and worked on nearly 20 books together.

Over the years, Andrea and Brian have fine-tuned their creative process. Every Saturday, they meet in their favorite diner from noon to 3pm. There, they spread their papers out on the table, and talk through sketches. The Saturday meeting is sacred, Andrea says — it's the one time each week that they set aside to collaborate face-to-face on their work. And at the end of those three hours?

"When it's done, it's done," she says. "Come Saturday evening there's no more discussing of the work. We know we've just got to wait 'till the following weekend."

No feedback at the Tuesday morning breakfast table. No strategizing while brushing teeth Wednesday night — "we like to keep it separate," Brian says.

On Their Ella Fitzgerald Biography

Andrea says she loves talking with students about the cover of the Ella Fitzgerald biography." Ella Fitzgerald is in this luminous purple dress," Pinkney says. "She is coming out of the front of that book almost like a beautiful planet in a galaxy of stars. Her skirt is like a globe showing the buildings around the world where Ella Fitzgerald visited." 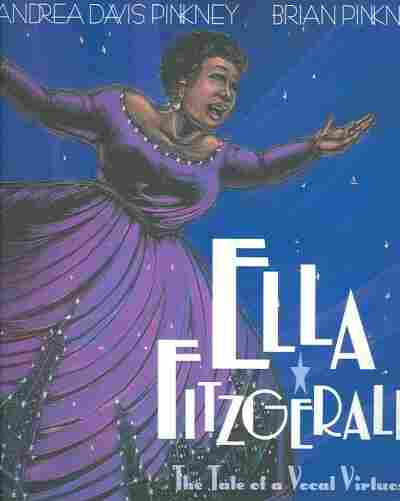 The Tale of a Vocal Virtuosa

"We have a family, and we could conceivably be talking about work 24/7, so we had to put kind of a nice, healthy boundary around it," Andrea adds.

They've also developed boundaries that govern the way they work individually. Brian's studio is not in their New York City home — it's in a totally different neighborhood, and Andrea says she's only visited that studio twice over the years (and one of those times she waited outside in the car.)

It's about "sovereignty," Brian explains; Andrea deserves the opportunity to work on her projects by herself, and he needs the freedom to interpret her stories in his own way.

"I never know what my husband's going to do," Andrea explains. As she writes, she may have a picture in her head of how an illustration will look, but then Brian shows her his paintings — "and they are of a nature that I never could have imagined," Andrea says. "That's why he needs to be off in the studio by himself — not listening to me tell him what I think they should look like."

When the time comes to give feedback, they've learned a lot through trial and error. First, at the Saturday meeting, there is no cross-talk and no interrupting. They take turns each week kicking off the conversation. And when Andrea gives feedback on sketches, she has to choose her words thoughtfully.

On Their Duke Ellington Biography

At one point in his life, Duke Ellington wanted to be a painter, Andrea explains: "He saw music as colors." So when Brian illustrated Ellington playing the piano, he painted "beautiful bursts of color coming out showing young readers how he imagined it," Andrea says. 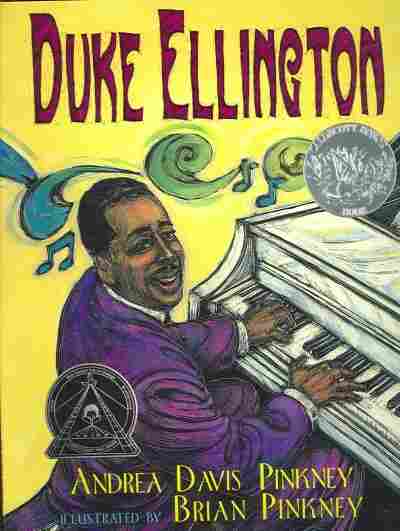 The Piano Prince And His Orchestra

Andrea says she speaks to her husband as she would any professional, collaborative partner. "I would never say to a colleague, 'That's the worst idea I've ever heard,' " she says. The goal is to give one another the same courtesy they'd give to any coworker.

Andrea and Brian are coworkers for the long haul. They've collaborated on baby board books, biography picture books, and narrative non-fiction books for older kids. Inspiration for Martin Rising struck when they attended a party together on Martin Luther King Day. "We were on the dance floor in a big loft," Andrea recalls. And someone started playing King's "I Have a Dream" speech on top of the music.

"I'm looking out at all of these families, and friends, and teachers, and librarians, and children, and grandparents — and they are really getting down to Martin Luther King's words," Andrea says. "And I turn to my husband and I said: 'Martin Rising.' And we ... both got these goose bumps and we knew that that was going to be our next book."

Most author/illustrator teams would not dream up new books together. Some might not even meet each other in person. "They don't go to Starbucks. They don't hang out ..." Andrea says. "We have a very unique situation because we are married and we share the same tube of toothpaste and box of cereal. It's a little untraditional in the picture book-making model."

And traditional or not, this book-making model is working. The Pinkneys are currently collaborating on their next project; they can't share exactly what it is, but Andrea says it's about civil rights and voting.

Brian says he can't imagine how Andrea comes up with the stories he illustrates. "The words and the metaphors that you come up with ... are so beautiful, and rich, and visual. ... [They] inspire me," Brian tells his partner in work and life.

"It's fun to work with the one you love," Andrea says. 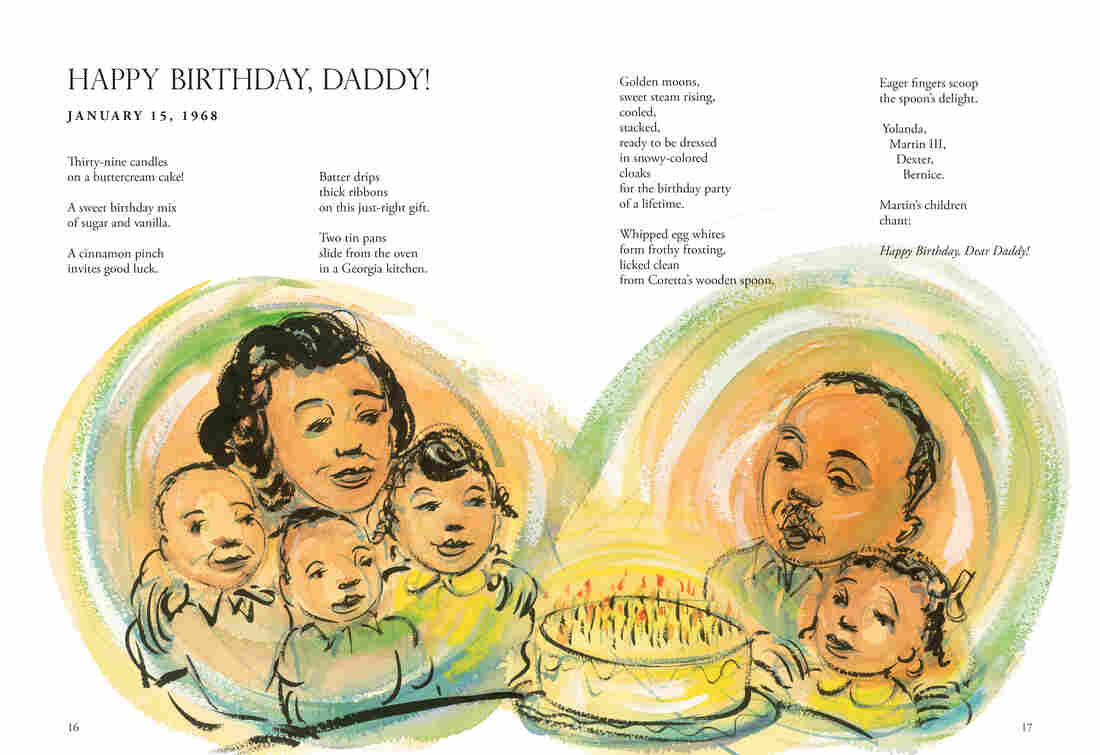 Samantha Balaban and Barrie Hardymon produced and edited this story for broadcast. Beth Novey adapted it for the Web.