Accessibility links
A U.S.-China Currency War? What You Need To Know After China let its yuan drop in value, the U.S. accused the country of being a "currency manipulator." Here is how China manages its money and what a dispute with the U.S. could mean.

A U.S.-China Currency War? What You Need To Know

A U.S.-China Currency War? What You Need To Know 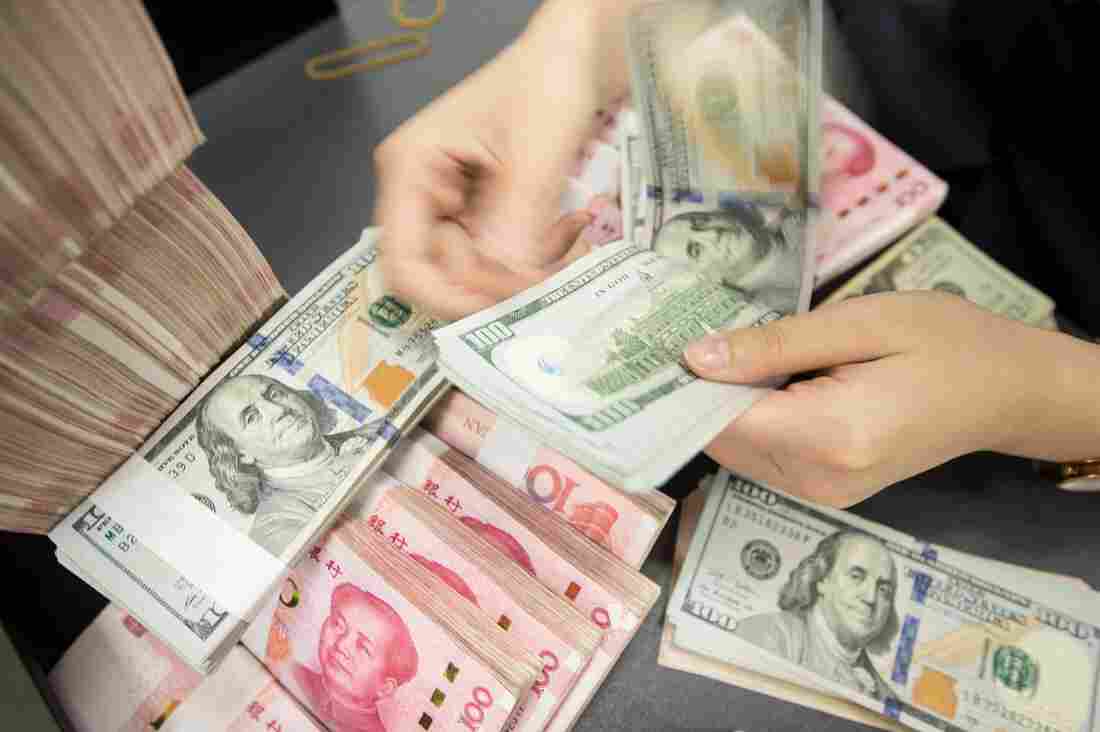 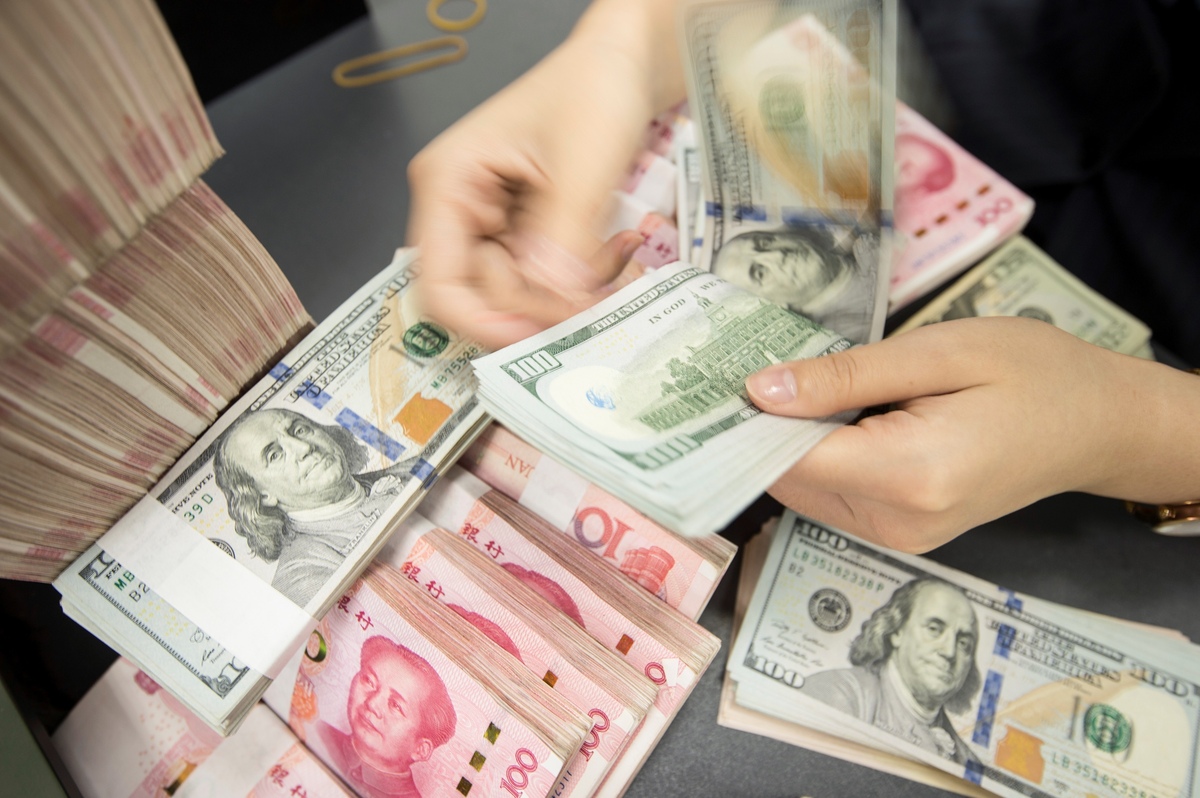 A Chinese bank employee counts 100-yuan notes and dollar bills at a counter in Nantong, in China's eastern Jiangsu province, on Tuesday.

Last Monday, China let the yuan drop to its lowest value since 2008. The currency is now trading at just over 7 yuan to the dollar.

The decision is a step toward what could become an unusual kind of currency war, one in which the U.S. would intervene to counteract the effects of China's weakened currency or both countries would even take steps to increase the value of the other's currency relative to their own.

Here are four things to know about how China manages its currency and what a currency war could mean for it and the United States.

Why did the yuan drop in value in the first place?

China's central bank, the People's Bank of China, signals each morning what its desired foreign exchange rate for the yuan will be and allows it to rise or fall through the day. For the last 11 years, China has kept its currency below a symbolic 7-to-1 ratio to the dollar — until last week.

It's a big change. Since 2016, China's monetary policy has actually been to prop up the yuan's value.

"Over the past several months, the [market] pressure has been toward a weaker yuan, but China has been resisting [depreciation of the yuan]," says Brad Setser, a senior fellow at the Council on Foreign Relations and a former deputy assistant secretary at the Treasury.

But economic forces are making that much harder. China is experiencing symptoms of a slowing economy as domestic debt and an outdated industrial sector take their toll. Its exports have also taken a hit due to U.S. tariffs imposed over the past year, putting more downward pressure on the yuan. Monday's drop in the yuan's valuation now brings the currency closer to what economists consider its true market value.

In a sense, analysts say, China has given in to monetary pressure largely resulting from U.S. tariffs. A weaker currency has the bonus of making China's goods cheaper for American buyers, which could offset some of the tariffs.

So is China a currency manipulator?

The 2015 Trade Enforcement Act lays out three criteria for what constitutes manipulation:

China meets only the first of those three criteria, according to the Treasury's most recent report on the topic in May.

China does carefully manage its currency to keep the yuan at a stable and targeted value through a host of measures, chiefly through buying and selling U.S. dollar bonds and controlling the outflow of yuan from its borders. But those activities do not rise to the level of currency manipulation, experts in China and the U.S. argue.

"I personally see this as a U.S. tactic of putting extreme pressure on China," says Wang Huiyao, president of Beijing-based think tank the Center for China and Globalization and an adviser to China's Cabinet.

How Much Worse Can U.S.-China Trade Relations Get?

How Much Worse Can U.S.-China Trade Relations Get?

Setser says there was a period when China did unequivocally qualify as a currency manipulator. From 2003 to about 2013, he says, China consistently intervened to depreciate the yuan by buying up billions of dollars in foreign currency. When China buys up lots of dollars, it makes the U.S. currency more expensive relative to the yuan, meaning the Chinese currency becomes weaker. Still, the U.S. complained but did not declare China to be a currency manipulator.

"The perception was that China might react negatively and that the more productive path was one of quiet negotiation and quiet dialogue. You can debate whether that was the right choice," says Setser.

The U.S. could threaten to buy up large amounts of Chinese government bonds, which would push up the yuan's value, even if China wants it to depreciate. But China could also counter by buying up more U.S. Treasury bonds, driving up the dollar.

China has also long been pushing for its currency to overtake the dollar in international influence. "If the U.S. continues to push in [a currency dispute], then China probably will accelerate the globalization of the renminbi as a currency for international trade," says Wang, using an alternative name for the yuan.

The Trump administration could create a legal justification for hiking tariffs on Chinese goods to the U.S. to offset any export advantage gained through a weaker yuan. That would break global trade rules, but the U.S. has already flouted those regulations by levying tariffs on Chinese imports as part of the ongoing trade war.

The U.S. could begin negotiations with China through the International Monetary Fund, but such talks may be seen as symbolic: The U.S. lacks the legal means to retaliate against a country for manipulating its currency.

So far, China has argued that the fluctuation in the yuan's exchange rate is due to market forces. Chinese trade experts say further devaluation would be risky for China's own economy, suggesting the country will not push the yuan much lower.

"It's bad for imports, and it's bad for our capital assets," explains He Weiwen, a former commercial attaché at Chinese consulates in the United States. That is because making the yuan weaker means China would have a harder time paying off dollar-denominated debt and buying imports. It would also depreciate the value of Chinese yuan-held assets.