Accessibility links
Charlottesville's Former Mayor Is Spreading Awareness About Far-Right Extremism In 2017, Mike Signer faced a small-town leader's nightmare: a racist rally that spiraled out of control and ended in bloodshed. Two years later, Signer is on a mission of education — and atonement. 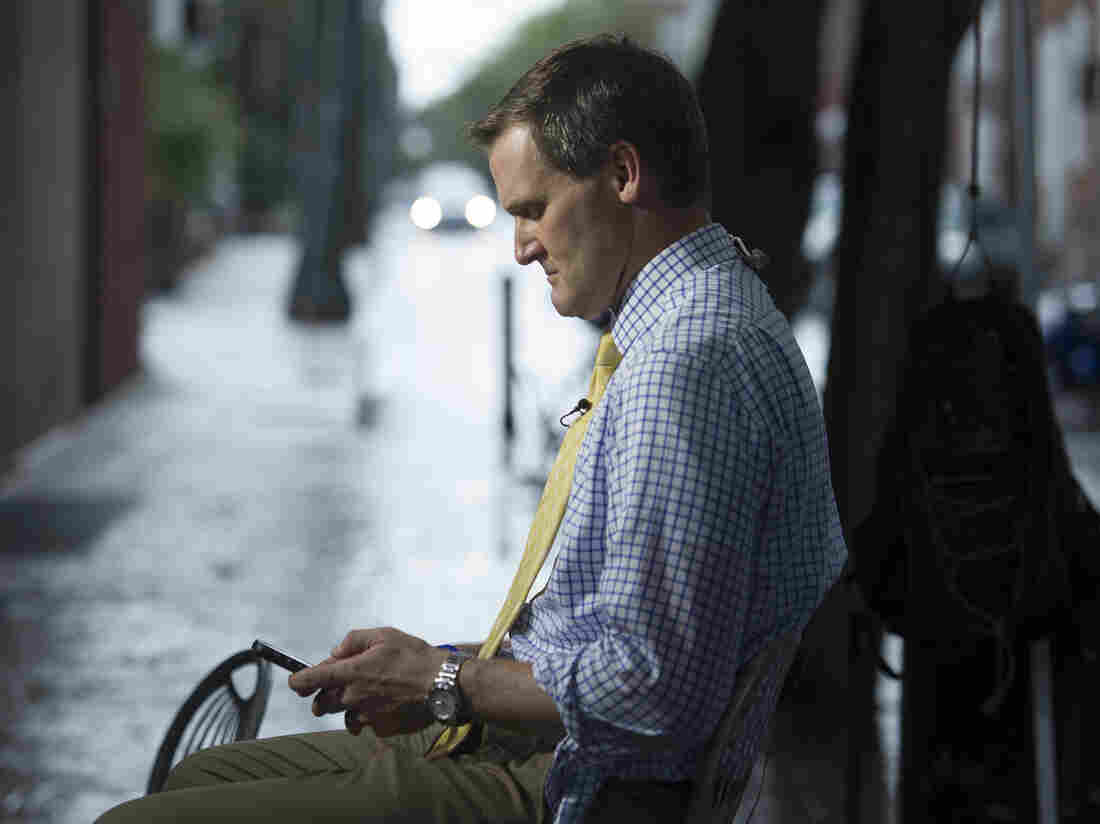 Mike Signer, mayor of Charlottesville at the time, checks his phone while waiting to speak days after Heather Heyer was killed during the Unite the Right rally in 2017. These days Signer travels the country presenting his city's experience as a cautionary tale. Cliff Owen/AP hide caption 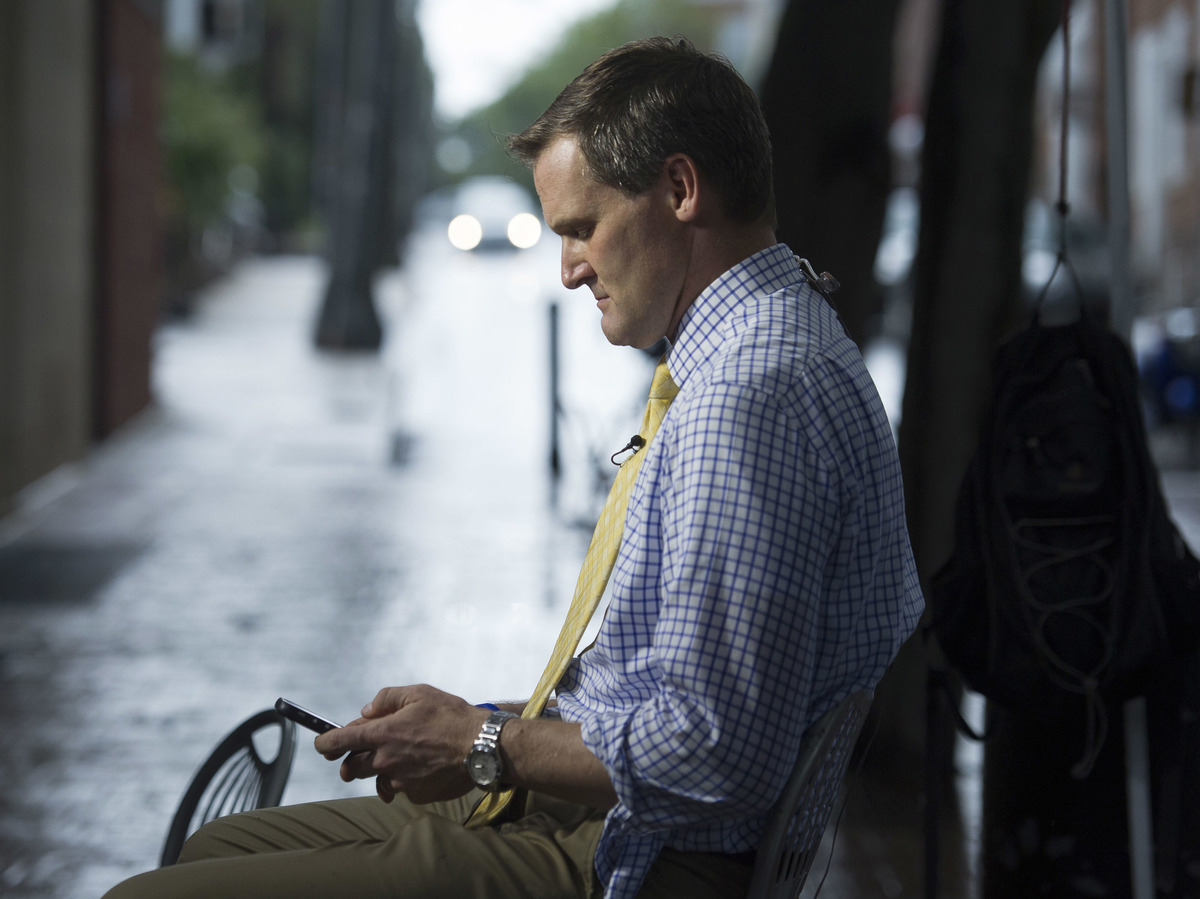 Mike Signer, mayor of Charlottesville at the time, checks his phone while waiting to speak days after Heather Heyer was killed during the Unite the Right rally in 2017. These days Signer travels the country presenting his city's experience as a cautionary tale.

It was late August in Charlottesville, Va., two years ago this month, with temperatures pushing into the high 80s. But what then-Mayor Mike Signer remembers most vividly about those days is the cold.

He'd walk into rooms and instantly feel a chill, an iciness, from townsfolk who had lost faith in their leadership. Sometimes people cried, sometimes they screamed.

"You had a whole city that basically needed therapy," Signer said.

At the time, less than a month had passed since hundreds of racists descended on Charlottesville for a violent rally that came to symbolize the dangers of a reinvigorated white supremacist movement. Signer, as mayor, was the face of the city's response. And when the tiki torches and hateful chants spiraled into clashes and a deadly car ramming, Signer became the face of the city's many failures.

An independent review found that officials had botched security and communication for the rally; Signer didn't seek a second term. He has repeatedly blamed police for the missteps in planning and response, but, overall, he acknowledges that as head of the local government, he bears responsibility.

And he's spent much of the past two years on a mission that seems equal parts education and atonement.

"There was the Charlottesville that was kind of the great reveal of how violent modern-day extremism is, a lot of the time enabled by social-media planning," Signer said. "And then the second hashtag Charlottesville was about those very significant setbacks in the governmental planning and response at every level: federal, state and definitely local."

Signer, 46, has written an upcoming book, Cry Havoc: Charlottesville and American Democracy Under Siege, and, in partnership with the Anti-Defamation League, created Communities Overcoming Extremism: The After Charlottesville Project. He travels the country, presenting his city's experience as a cautionary tale as he urges local governments, tech companies and nonprofits to take seriously the rise of the violent far right, which the FBI calls the deadliest and most active form of domestic extremism.

"Anybody who thinks that they have a perfect, five-point plan and the perfect white paper for how to deal with extremism coming onto their platform and into their city is delusional," Signer said.

Signer was speaking from a hotel lobby one recent morning in San Francisco, just before convening a summit of tech leaders at the nearby Airbnb corporate headquarters. Months before, he'd led a similar meeting of municipal leaders. The gatherings are at the heart of the After Charlottesville campaign, which wraps up with a final report expected this fall.

Finding big-picture solutions for curbing extremism requires time and political will, Signer said, so in the interim he's looking at how to offer urgent help to leaders like he was in 2017: a small-town mayor called upon to guard his city from hate groups without running afoul of constitutional protections for free speech.

"The experience I had was often of feeling like we were improvising and like we were alone," Signer said. "It was a small college town subjected to multiple waves of invasions by very violent groups."

Beyond his experience as a former mayor, Signer said, he's also focused on these issues as a Jew who's alarmed at the increase in anti-Semitic rhetoric and imagery in political discourse, and the uptick in hate crimes. His Jewish identity drew extra attention from supporters of the rally — one sent Signer a doctored image that depicted him in a gas chamber, with the Confederate general Robert E. Lee pushing the lethal button. He began to think seriously about the safety of his family — his wife, professor Emily Blout, and their twin toddlers.

"We're juggling just the day to day activities while waves of hate are coming into your home," Signer recalled. "I got a voicemail on my phone that was somebody from Florida and it was just audio of Hitler ranting about Jews."

The politician in Signer lapses into jargon to describe what he's trying to accomplish with the After Charlottesville campaign — he uses terms like "alliances" and "capacity building." What he's really talking about, and what he does talk about once his guard is down, amounts to imparting hard-won wisdom. On sleepless nights after the rally, he said, he found solace in Proverbs: Do not forsake wisdom, and she will protect you; love her, and she will watch over you.

"If you can get wisdom, it's the thing that can move you forward to the next stage of your life, even through the very hardest and most bitter of times," Signer said.

That idea also worked its way into his programming. In practical terms, that means building a nationwide brain trust of people who have gone through ordeals like the one in Charlottesville and who are willing to share the often painful lessons they learned. Last summer, Signer said, he was in Colorado to officiate a friend's wedding when he got a call from a Southern mayor who faced an imminent confrontation between a white nationalist group and protesters outside an immigration detention center.

"He said, 'I got 15 minutes before I'm going into my meeting with the police chief. Tell me what I need to know from Charlottesville.' And I did," Signer said. 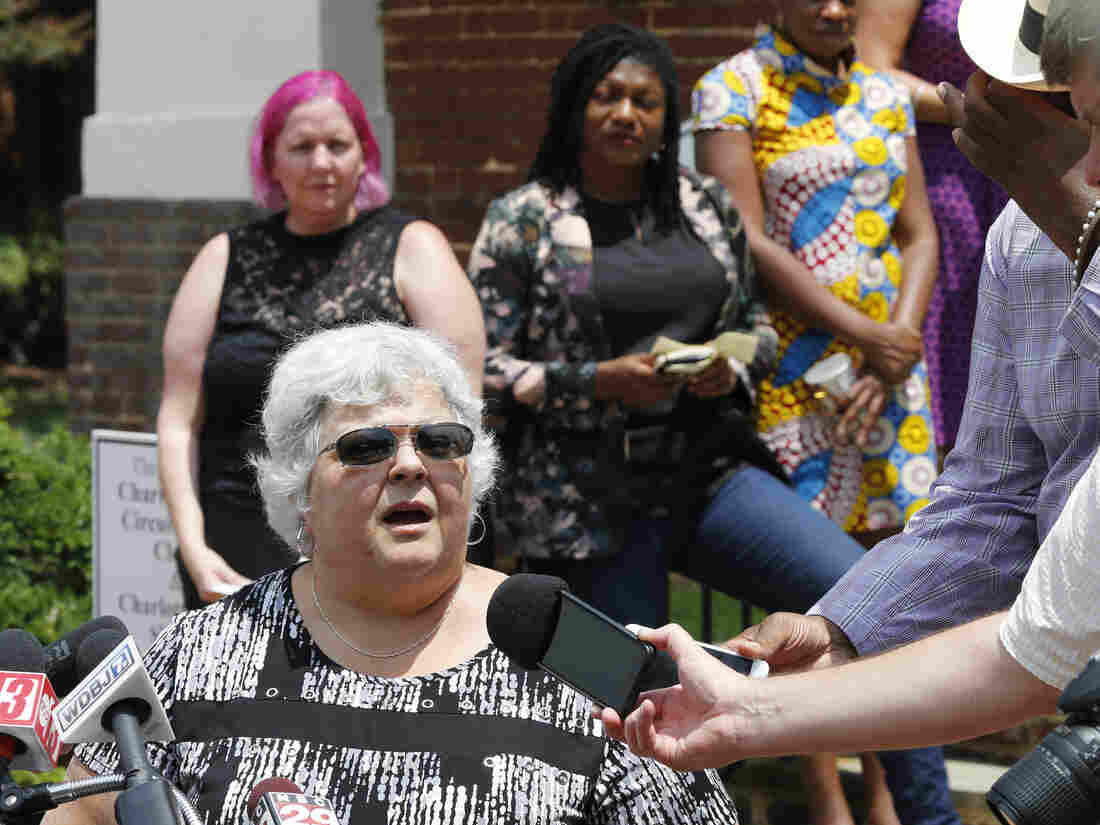 Susan Bro — the mother of Heather Heyer, who was killed during the Unite the Right rally in 2017 — speaks to reporters after the sentencing of James Alex Fields Jr. in Charlottesville on July 15. Steve Helber/AP hide caption 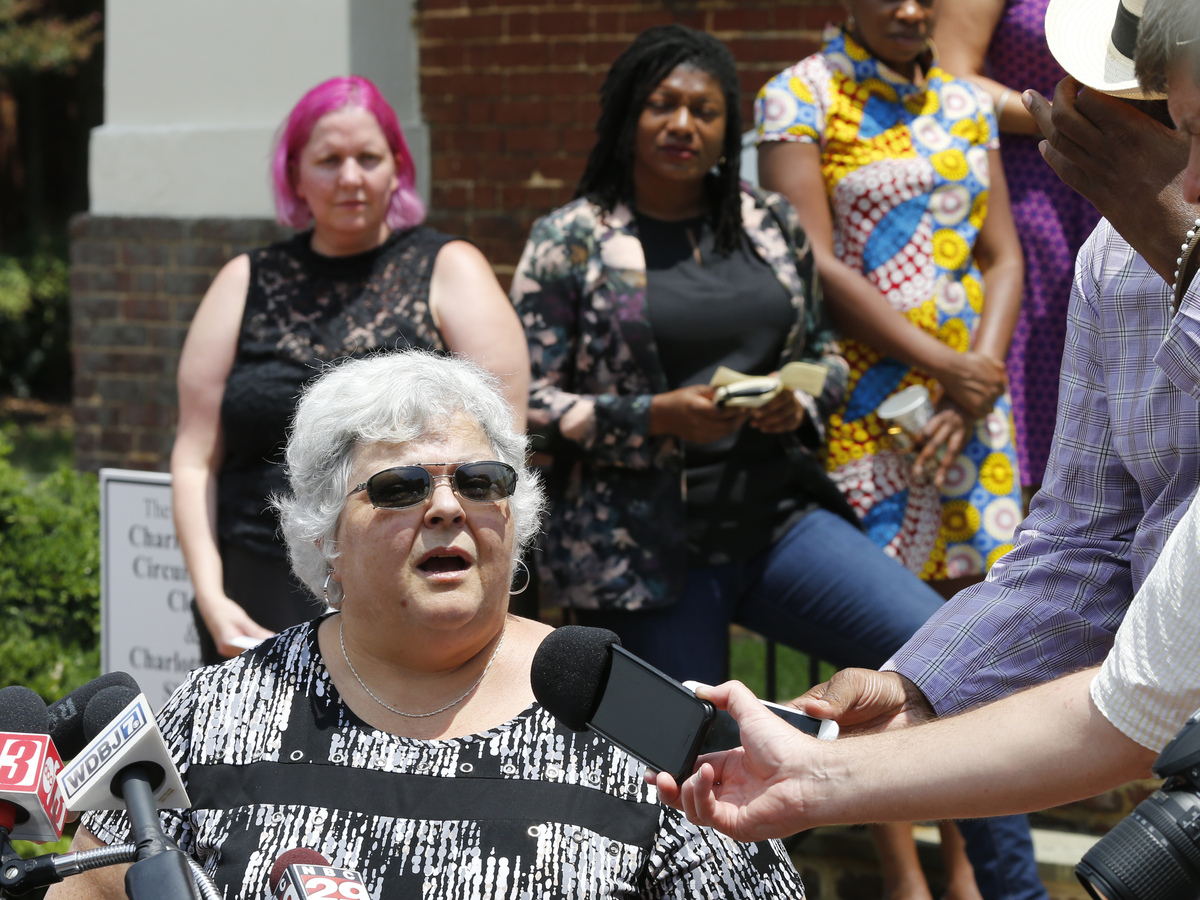 Susan Bro — the mother of Heather Heyer, who was killed during the Unite the Right rally in 2017 — speaks to reporters after the sentencing of James Alex Fields Jr. in Charlottesville on July 15.

One of the most powerful voices enlisted by Signer is one that might seem unlikely, given the blame heaped upon his government in the independent review. Susan Bro is the mother of Heather Heyer, the 32-year-old woman who was who killed at the Charlottesville rally when a white supremacist rammed his car into a crowd of protesters.

Bro now leads a foundation named in her daughter's honor, and she works closely with Signer on spreading awareness and best practices for countering violent extremism. In San Francisco, she greeted the former mayor with a hug before taking the stage. The audience was rapt, with many wiping away tears as Bro shared her story.

In an interview afterward, Bro explained why she said yes when Signer floated the idea of working together.

"Life is complicated. People are complicated. And Mike and I together can present a more powerful and unified and effective voice for change than if I were to be in combat with him and say, 'You made mistakes,' " Bro said.