Accessibility links
Trump Administration Rule Would Penalize Immigrants For Needing Benefits The "public charge" rule would limit the ability of immigrants to get green cards if they are likely to use government benefits, such as SNAP or housing aid. 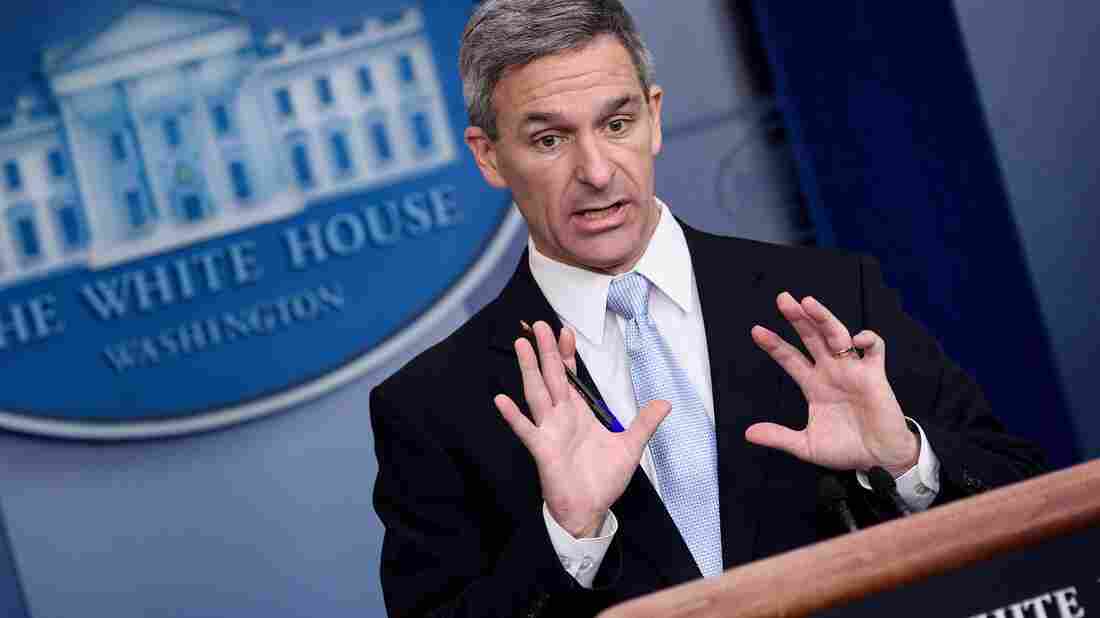 Ken Cuccinelli, the acting director of U.S. Citizenship and Immigration Services, speaks during a briefing at the White House on Monday. Trump administration officials announced new rules that aim to deny permanent residency to migrants who may need to use food stamps, Medicaid and other public benefits. Brendan Smialowski /AFP/Getty Images hide caption 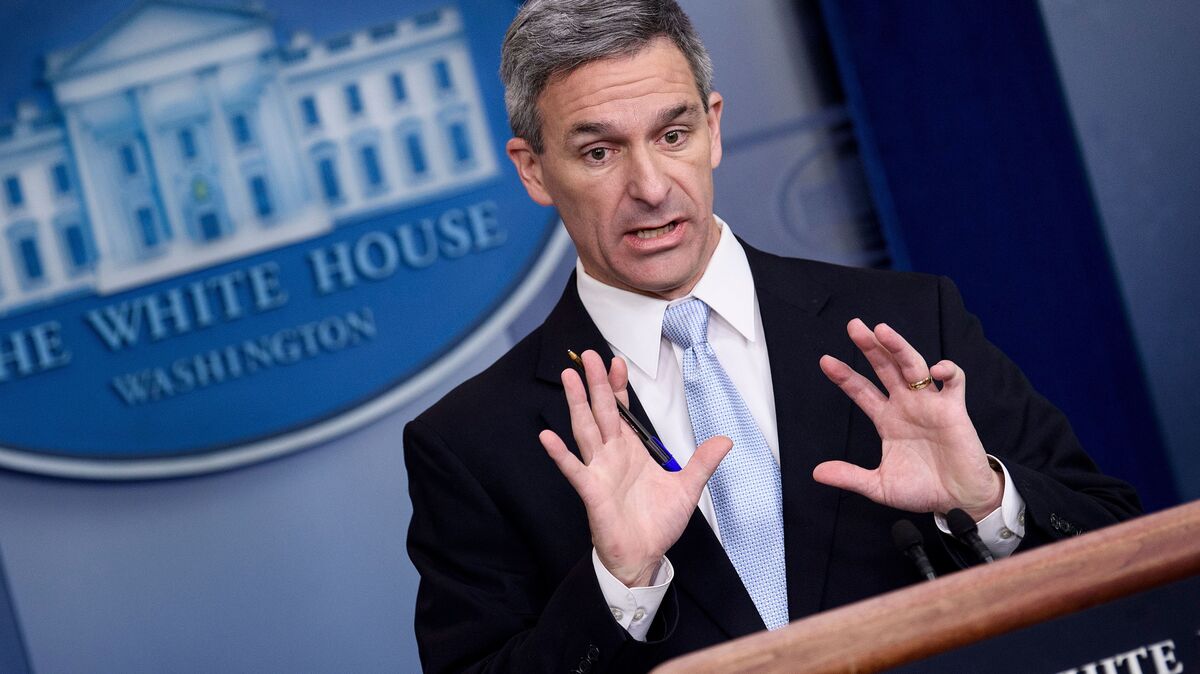 Ken Cuccinelli, the acting director of U.S. Citizenship and Immigration Services, speaks during a briefing at the White House on Monday. Trump administration officials announced new rules that aim to deny permanent residency to migrants who may need to use food stamps, Medicaid and other public benefits.

The Trump administration is moving forward with regulations that are expected to dramatically reshape the U.S. immigration system by denying green cards and visas to immigrants who use — or are expected to use — a wide range of federal, state and local government benefits, including food stamps, housing vouchers and Medicaid.

The final version of the "public charge" rule, which has been a top priority for immigration hard-liners in the White House, is set to be published in the Federal Register on Wednesday.

Ken Cuccinelli, the acting director of U.S. Citizenship and Immigration Services, announced the move Monday morning. He said the purpose is to clarify existing law, which is designed to ensure that immigrants do not become dependent on the government.

"Through the public charge rule, President Trump's administration is reenforcing the ideal of self-sufficiency and personal responsibility, ensuring that immigrants are able to support themselves and become successful in America," he said.

The rule is set to take effect in 60 days but is expected to draw legal challenges from immigrant-rights groups and others.

A preliminary draft published last year drew more than 260,000 comments. Many of the comments expressed outrage that the administration would penalize immigrants for using benefits that they are legally entitled to receive. The change is seen as part of a broader administration effort to limit both immigration and the overall use of public benefits.

Immigrant advocates immediately denounced the final rule, which they say could hurt millions of immigrants already living in the U.S. as well as their citizen children. They say it could also sharply curtail legal immigration, especially when coupled with tough new State Department standards that take the likelihood of an immigrant's use of public benefits into account when granting visas.

"This news is a cruel new step toward weaponizing programs that are intended to help people by making them, instead, a means of separating families and sending immigrants and communities of color one message: You are not welcome here," said Marielena Hincapié, executive director of the National Immigration Law Center, which announced that it intends to file a legal challenge against the new rule.

Cuccinelli says the administration is merely trying to enforce a long-standing goal of U.S. immigration law, which is to prevent individuals from becoming a "public charge."

But in recent decades, the government has interpreted the "public charge" requirement to mean that immigrants are not likely to depend on cash welfare programs, which most immigrants are barred from receiving anyway. The new regulations greatly expand the definition of "public charge" to include noncash benefits as well — such as nutrition assistance, housing vouchers and subsidized medical insurance. Cuccinelli notes that there will be a number of exceptions, including certain benefit use by refugees and asylum-seekers, military members, and children and pregnant women.

Under the rule, green card and visa applicants can be denied not merely for being "primarily dependent on the government for subsistence," as in the past, but if they are likely to need public assistance "at any time."

The regulations also add new requirements for income and financial assets. Advocates say that will make it difficult for immigrants earning less than 250 percent of the federal poverty guidelines (more than $64,000 for a family of four) to get green cards, although the administration argues that the limit is closer to 125 percent of poverty.

The new rule would apply not retroactively but to future applicants for green cards and visas. Past use of most benefits would not be held against the applicant, and neither would the use of such benefits by dependents and other family members.

Still, public health and social service providers say they have already seen a chilling effect among immigrants who are afraid to get government aid — not only for themselves but for their U.S. citizen children — for fear it could be held against them. The impact was felt as soon as rumors began to spread early in the Trump administration that the rule change was under consideration.

The Urban Institute reported recently that 13.7% — 1 in 7 — of adults in immigrant families say that they or a family member did not participate in a benefit program last year "out of fear of risking future green card status."

Opposition is expected to be widespread. A group of 17 state attorneys general sent a letter to the Office of Management and Budget last month, arguing that DHS had "entirely failed to estimate the true costs" of the regulation.

"The proposed rules would cause extensive injury to our states' economies and to millions of our states' residents," Washington AG Bob Ferguson wrote. "If implemented as proposed, the rules will result in a reduction of total economic output, a drop in workers' wages, and elimination of jobs in our states."

Businesses, such as the home care industry, are also expected to be affected. An estimated 25% to 40% of the nation's 2 million home care workers are recent immigrants. The average wage is about $10 an hour, which makes many of them eligible for public assistance.

William Dombi, president of the National Association for Home Care and Hospice, says there is already a shortage of home care workers and the new rule will only exacerbate the problem.

"This is very hard work and it's very poorly paid," he says.

Dombi says the irony is that many home care workers need public assistance because their low pay rates are set by the government program — Medicaid — that funds many of the services they provide.