Accessibility links
Census Bureau Workers Around The Country Begin Address Canvassing Census Bureau workers are spreading out across the U.S. to make sure they have a list of every home address for next year's head count. Getting left out could lead to an inaccurate 2020 census. 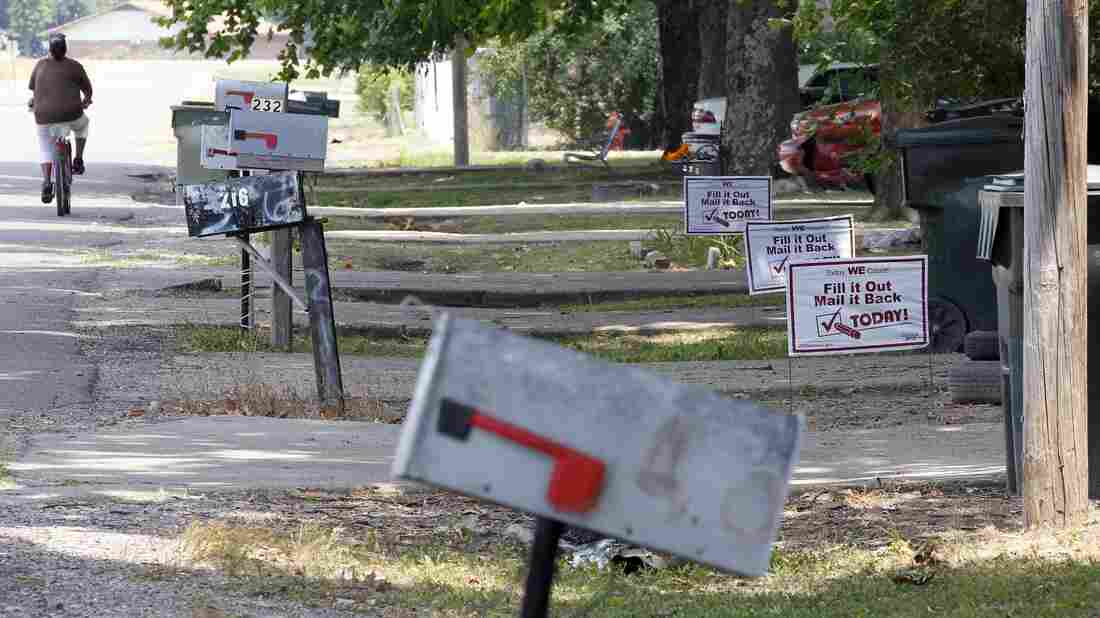 A bicyclist pedals past signs promoting the 2010 census outside homes in Rolling Fork, Miss., in 2010. Rogelio V. Solis/AP hide caption 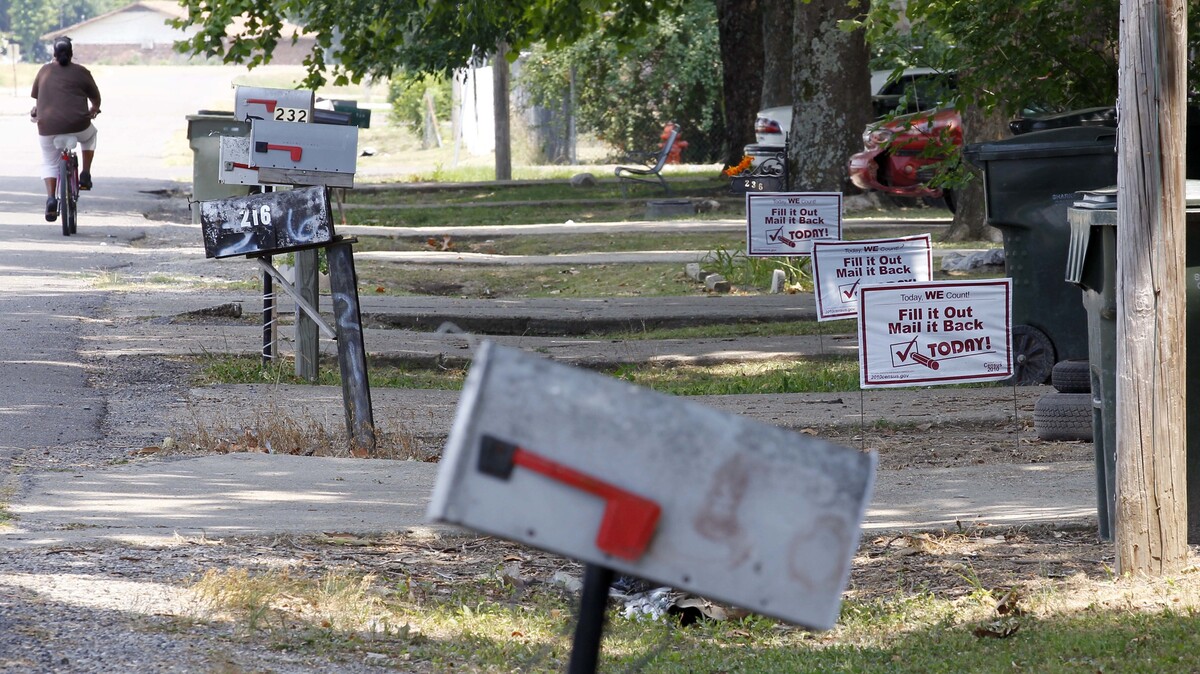 A bicyclist pedals past signs promoting the 2010 census outside homes in Rolling Fork, Miss., in 2010.

Starting this month, tens of thousands of Census Bureau workers are knocking on doors across the country to make sure the bureau has a complete list of addresses of where people live in the U.S.

Those addresses determine where the bureau will mail instructions and send the next major deployment of workers in 2020 for the constitutionally mandated head count of every resident, which is conducted by household.

"If the Census Bureau does not even have the address, what they miss is not just one person. It's the entire household, so it's serious stuff," says Jim Chang, Arizona's state demographer, whose office is working to make sure all of the state's home addresses are included.

This canvassing for addresses is expected to be the most visible on-the-ground preparation to date for the upcoming 2020 census, which is set to officially kick off in remote parts of Alaska in January before rolling out to the rest of the country by April.

The U.S. Census Bureau says when canvassing neighborhoods, its employees will carry official government photo IDs, as well as black bags and laptops with the 2020 census logo.

Carrying laptops and black messenger bags, around 40,000 temporary Census Bureau employees known as "listers" are expected to comb through neighborhoods through October, mainly in the evening and during the weekend, to verify more than 50 million addresses — or about a third of all of the country's home addresses. The bureau has created a map to show which neighborhoods it plans to visit in person.

For the other addresses, the bureau agency has been using satellite images from the National Geospatial-Intelligence Agency, Department of Agriculture and DigitalGlobe, a private company, to check for new homes and other changes in neighborhoods from computer screens at the bureau's headquarters in Suitland, Md.

By comparing bird's-eye view images from around 2010 with more current ones, the bureau has been verifying home addresses it has compiled from the U.S. Postal Service, as well as tribal, state and local governments.

It's a method that makes sense for rural areas where many single-family homes are difficult to reach in person, says Wenlin Liu, the chief economist for the state of Wyoming.

"Many of the roads are not paved, so you may miss some ranch roads," Liu explains. "Many of our communities live in open grassland, plains areas, so for the satellite image, you can clearly identify."

Relying more on satellite images for the 2020 count than for past censuses is also expected to help the bureau cut down on the cost of sending workers to verify addresses — one of the most expensive parts of conducting a census, along with deploying door knockers to interview households that don't respond to questionnaires themselves.

For the 2020 count, the bureau is hiring about a third of the close to 149,000 temporary workers needed in 2010 to canvass just about every street in the states and Puerto Rico, for around $444 million. The bureau estimates the current fieldwork to total $185 million.

These workers will be needed to check addresses in more densely populated parts of the country, as well as areas where homes are obscured by trees or clouds in satellite images. The photos are also not effective for identifying homes within high-rise buildings and usually cannot help detect what the bureau calls "hidden housing," such as converted garages and basements.

"People can put up Sheetrock and turn the back of the house into an apartment and, probably, it's not been permitted," says Pam Perlich, director of demographic research at the University of Utah's Kem C. Gardner Policy Institute. "They have all kinds of incentive to not declare that either to their tax collectors or local governments or postal service." 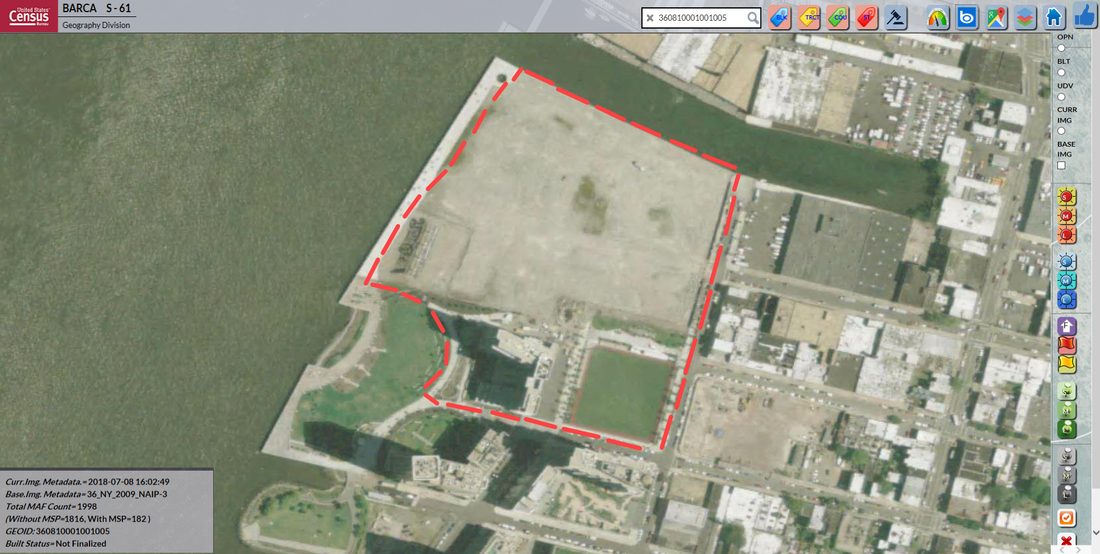 A 2009 satellite image taken over the borough of Queens in New York City. Courtesy of the U.S. Census Bureau hide caption 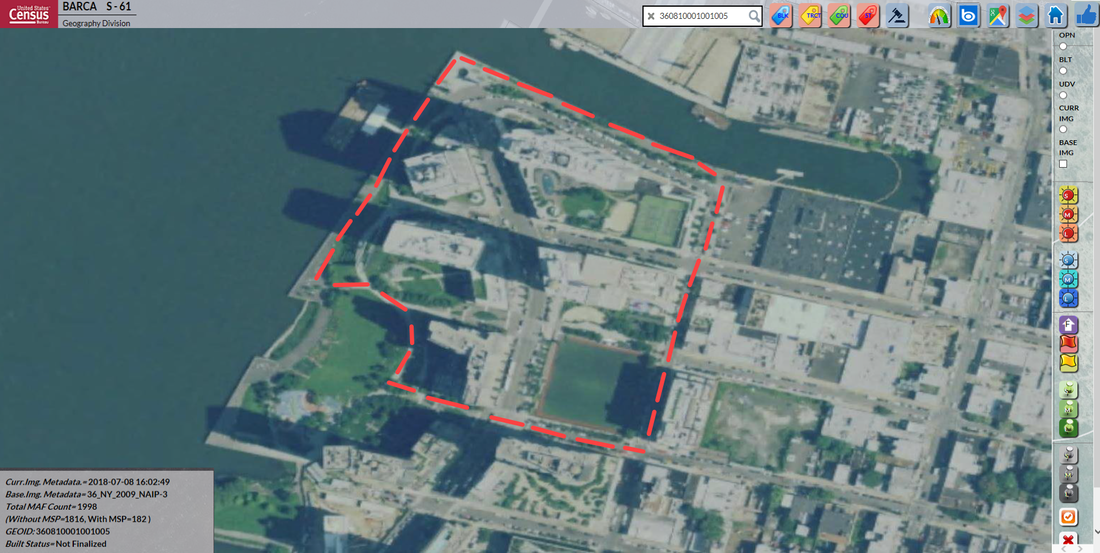 A 2018 satellite image taken over the borough of Queens in New York City. Courtesy of the U.S. Census Bureau hide caption

That's why sending listers to look in person for clues such as multiple doorbells or mailboxes outside a home has been critical to getting an accurate census in the past, especially within ethnic enclaves and other hard-to-count communities living in densely populated areas.

Perlich is concerned, however, that distrust of the government in light of increased immigration enforcement and the current political climate may make it difficult for the bureau to verify addresses.

"With all the things that you hear, the language that's being used around new Americans, it's gonna be difficult to get them to even answer the door," Perlich says. "This just compounds that probability that people are going to be missed."

Cesar Espinosa, executive director of the Houston-based immigrant advocacy group FIEL, says he is worried that the "damage has already been done" by controversy over the now-blocked citizenship question the Trump administration failed to add to the 2020 census, which he fears will lead to a "bad census count" in the Houston area — home to the third-largest unauthorized immigrant population in the U.S., according to estimates by the Pew Research Center.

Still, FIEL is preparing to answer questions from community members about whether they should open their doors once address canvassing ramps up. While Espinosa's organization is encouraging members to talk to Census Bureau workers — whose employment they can verify through photo IDs and on the bureau's website — FIEL has also advised Houston residents to be extra cautious about letting strangers inside their homes in light of recent reports of expected raids by Immigration and Customs Enforcement officers.

"We still haven't found a way to really counteract that in the long run, and we know that that's going to be an issue with the 2020 census," Espinosa says.

After address canvassing is complete in October, there is still a chance for states to fill in any gaps. The bureau is planning to consult with officials like Perlich through a program for reviewing any addresses that may have been left out.