Accessibility links
Kamala Harris Tries To Paint Herself As A Front-Runner, Makes Her Move In Iowa The Iowa State Fair can be a lot of fun, but for presidential candidates it's serious business. California Sen. Kamala Harris came to the fair intent on proving she's a top-tier contender. 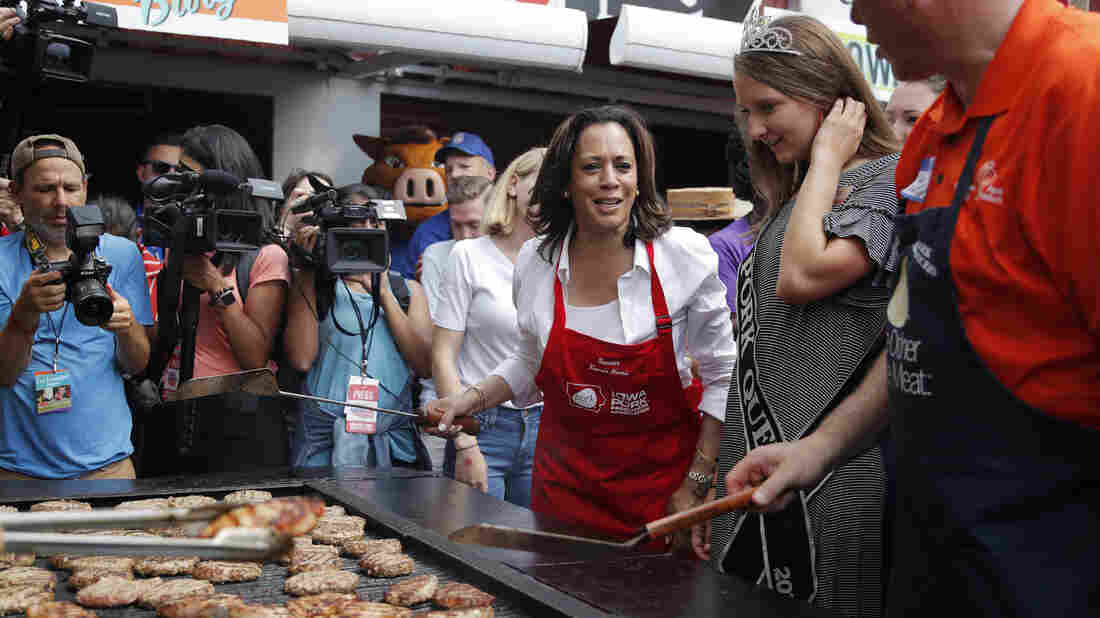 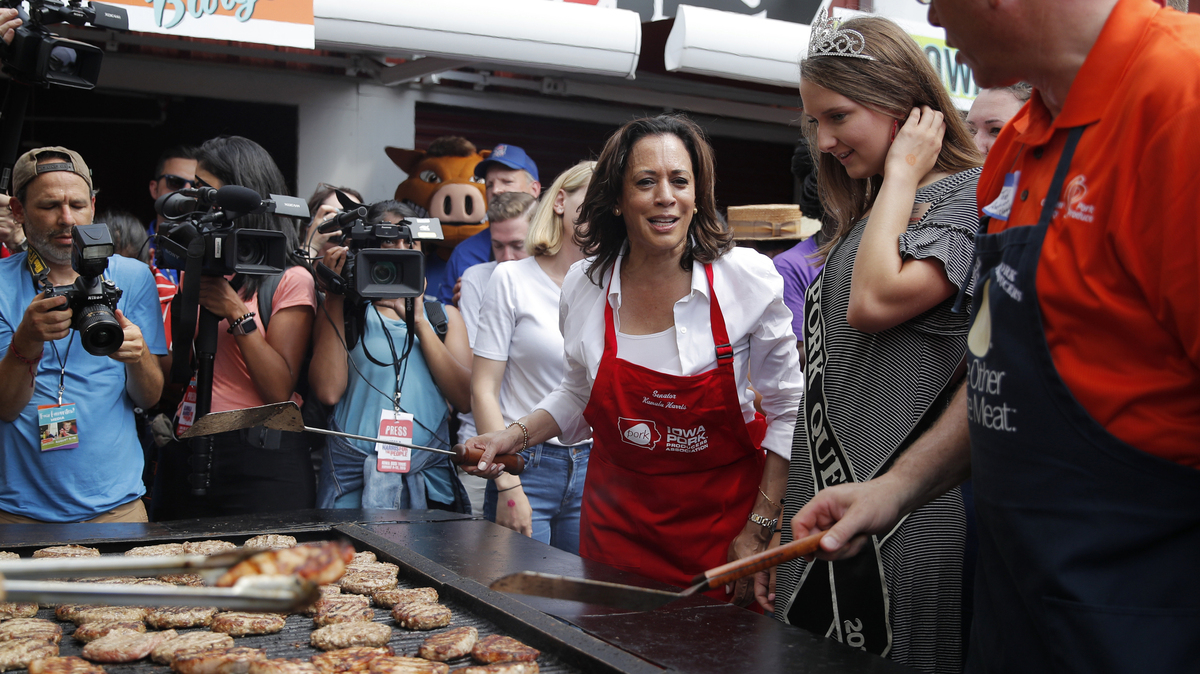 Sens. Elizabeth Warren and Bernie Sanders are campaigning on "big structural change" and "political revolution." Former Vice President Joe Biden thinks voters will weigh the "soul of America" as they decide whom to support.

The California senator's campaign is increasingly focused on economic challenges that, as she framed it at the Iowa State Fair this weekend, wake voters up in the middle of the night.

"It usually has to do with one of just a very few things: our personal health, the health of our children and parents," she said. "For so many, 'Can I get a job, keep a job, pay the bills by the end of the month?' "

Even though Democrats credit a focus on health care and income inequality as the reason for winning back the House of Representatives last year, presidential campaigns are often won on big sweeping narratives defined by memorable slogans: Yes We Can, for example, or Make America Great Again.

Harris was in the middle of a five-day bus tour, designed as a show of force with a clear message: The candidate is a serious contender who could take on President Trump in a general election. It had all the hallmarks of a big, top-tier campaign swing: the big, black bus with KAMALA written down the side in yellow, blue and red; the swarm of media following the candidate from event to event; the rollout of endorsements from high-profile Iowa activists.

Harris had one of the biggest crowds at the fair, as she flipped pork chops on the big grill and quipped, "I think I can also flip Republicans."

But for all those telltale signs of a front-runner, Harris still hasn't established herself as Democrats' top choice — yet. A Monmouth University poll of Iowans, released Thursday, found Harris in third with 11% behind former Vice President Joe Biden (28%) and a surging Massachusetts Sen. Elizabeth Warren (19%). In most national surveys, Harris is also trailing Sen. Bernie Sanders of Vermont.

At event after event, potential voters and caucusgoers often sound like Dale Liska, who came to see her speak in Fort Dodge.

"I like her," he told NPR, but "I'm kind of in between about three candidates right now."

Harris hasn't rolled out as many plans as Warren — no one has — but like so many other Democrats, she's released policy after policy — a tax credit for families earning less than $100,000, a federal effort to boost teacher pay, regulations designed to force big companies to eliminate gender pay gaps.

But in the midst of an election where Democrats are instead focused on the intangible qualities of a candidate who can simply beat Trump, it's telling that Sue Dvorsky — a longtime Iowa Democratic organizer and former party chair, who endorsed Harris over the weekend — said she was drawn to Harris' stage presence more than anything else.

With Congressional Blessing, Space Force Is Closer To Launch

"When you watch her in a room, she's just electrifying," Dvorsky said. "When she meets people, when people hear her, she's exciting."

Indeed, many Democrats drawn to Harris say it's not the policies they like, but instead just the way she's gone after opponents on debate stages and in high-profile Senate hearings.

"I could imagine her doing that to Donald Trump, and just cutting him off at the knees," said Shelly Escobido, as she waited for Harris in Fort Dodge.

But like many other Democrats, Escobido is "out shopping" and intends to keep shopping for a while. Harris is on her "list," but so are four other candidates, she said.

When Harris has those moments like in the first debate, when she confronted Biden over his previous opposition to federal busing requirements, she rises on Escobido's list.

But other times, when Harris isn't taking as clear or as bold a policy stance as other Democrats, she drops down on the list again.