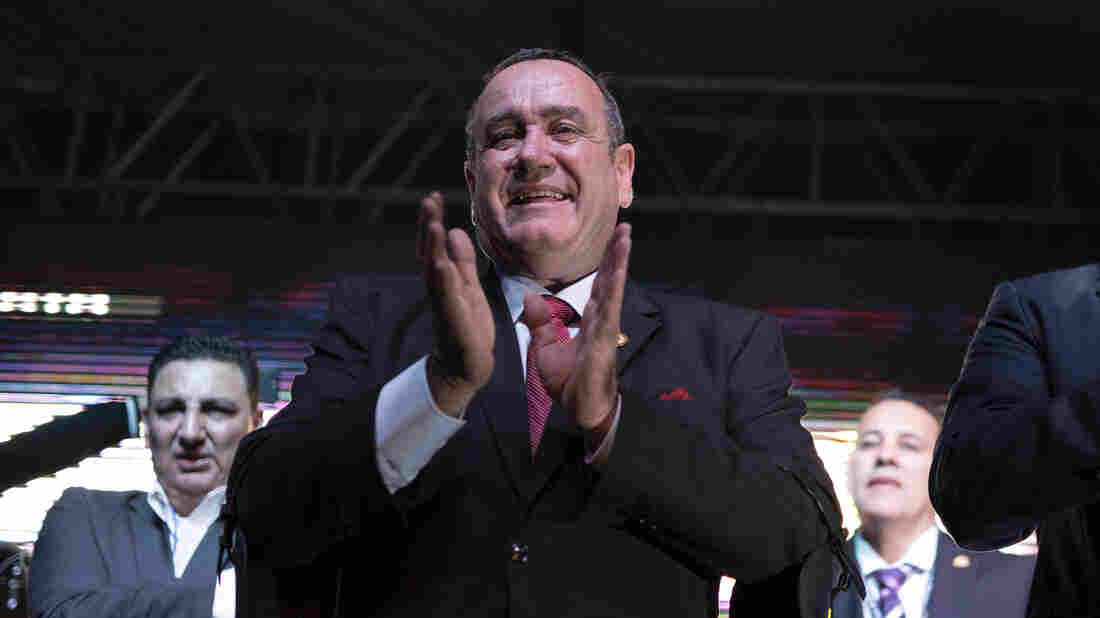 Alejandro Giammattei stands before supporters in Guatemala City on Sunday, before being declared the victor in Guatemala's presidential elections. Santiago Billy/AP hide caption 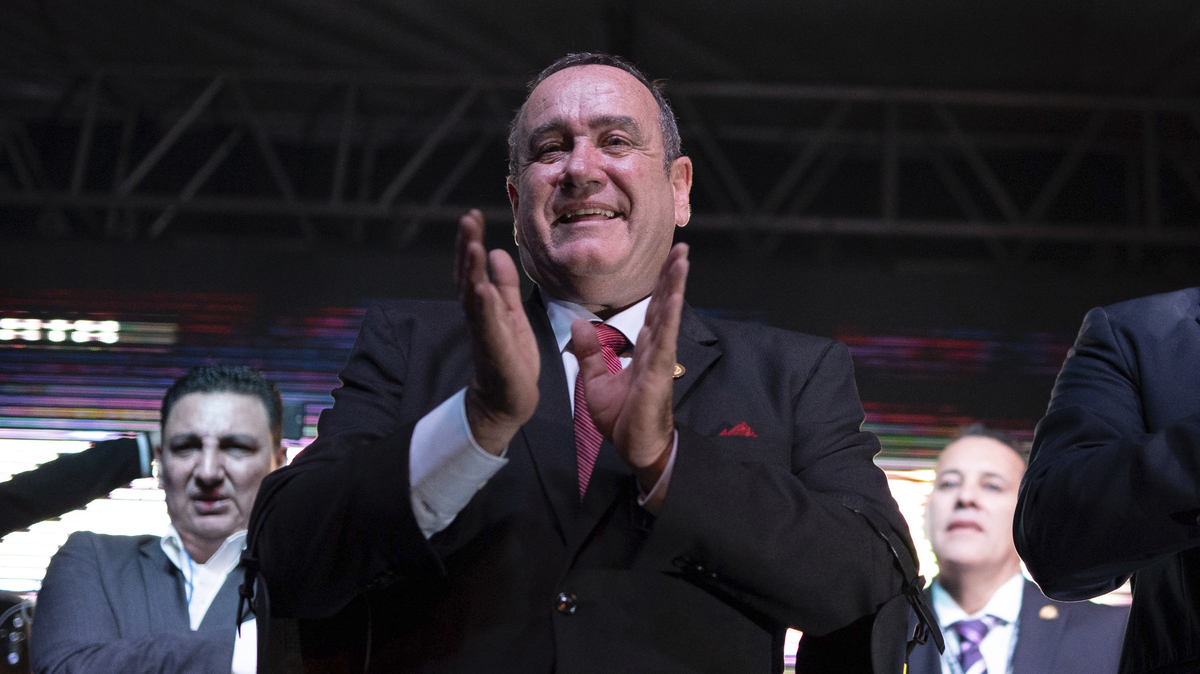 Alejandro Giammattei stands before supporters in Guatemala City on Sunday, before being declared the victor in Guatemala's presidential elections.

Guatemalans have chosen Alejandro Giammattei, a conservative who once led the country's prison system, to be their next president.

Voter turnout in the runoff was low on Sunday in the small, Central American country. Preliminary results showed Giammattei won nearly 58% of the vote and that fewer than half of eligible Guatemalans had cast ballots, according to the country's electoral tribunal.

A 63-year-old surgeon, Giammattei tried three times previously to become president before succeeding on his fourth attempt. He campaigned on a promise to fight crime and build "a permanent political force with a deep love for God, family and Guatemala" with his Vamos political party.

When he takes office on Jan. 14, Giammattei will face a range of serious issues that include rampant corruption, widespread poverty and unemployment.

He will also need to negotiate with President Trump, who last month threatened to impose a travel ban, tariffs on exports and taxes on migrants' remittances if Guatemala did not comply with his immigration ambitions.

The Trump administration wants to reduce the numbers of migrants at the southern border by shifting the burden to Central American countries from which many migrants have fled.

The administration expected Guatemala to become a safe third-party country — which would require migrants who travel through Guatemala to request asylum there instead of seeking protection in the United States.

The deal was unpopular in Guatemala, and a high court blocked the country's president, Jimmy Morales, from signing the agreement last month. Morales blamed the court for harming his "good relationship" with Washington.

Giammattei cast himself as ready for the job. "I'm a man accustomed to working under pressure," he told NPR's Carrie Kahn on Sunday as he addressed reporters, moments after casting his ballot.

Before he was declared the winner, Giammattei told Reuters he hoped to modify the migration deal with the United States. "I hope that during this transition the doors will open to get more information so we can see what, from a diplomatic point of view, we can do to remove from this deal the things that are not right for us, or how we can come to an agreement with the United States," he said.

"If we don't have the capacity to look after our own people, imagine what it will be like for foreigners," Giammattei added.

About 250,000 people from Guatemala were apprehended at the border since October, according to to U.S. Customs and Border Protection. They were fleeing extreme violence, poverty and food insecurity.

In 2010, Giammattei was arrested for his involvement in extrajudicial killings when he led the country's prison system, according to a United Nations-backed group called the International Commission Against Impunity in Guatemala.

The case against him was eventually dismissed. He announced in the spring that he was taking legal action against the organization, which had steadily earned the trust of Guatemalans by investigating military and government elites for stealing public funds.

Last year, Morales announced that he would not renew the commission's mandate, which expires next month — essentially shutting down the anti-graft group.

The commission submitted hundreds of convictions to the Guatemalan Congress. Morales, a former comedian, was entangled in an investigation for allegedly accepting illegal campaign contributions. And two former Guatemalan presidents, among others, were jailed on corruption charges.

"Guatemala is so bad," said Paula Rosales, who was selling trinkets outside the main downtown cathedral in Guatemala City. Rosales told Kahn that the last president let migrants in, stole from the people and did nothing to help the poor.

Jessica Viviral, a 23-year-old university student who voted for the first time on Sunday, expressed uncertainty about what comes next with Giammattei at the country's helm. "Really the future is in his hands and we don't know exactly what he's going to do," she said. "That's really scary."

Juan Carlos Tefel, president of Guatemala's leading business group, told NPR that many Guatemalans "are very disenchanted with the process."