Accessibility links
Across Europe, Museums Begin To Consider Returning Their Looted African Art Attitudes toward returning cultural artifacts, often looted during colonization, are changing. In countries like France, Germany and Belgium, the talk has turned to restitution and repatriation.

Listen · 5:12 5:12
Across Europe, Museums Rethink What To Do With Their African Art Collections 5:12 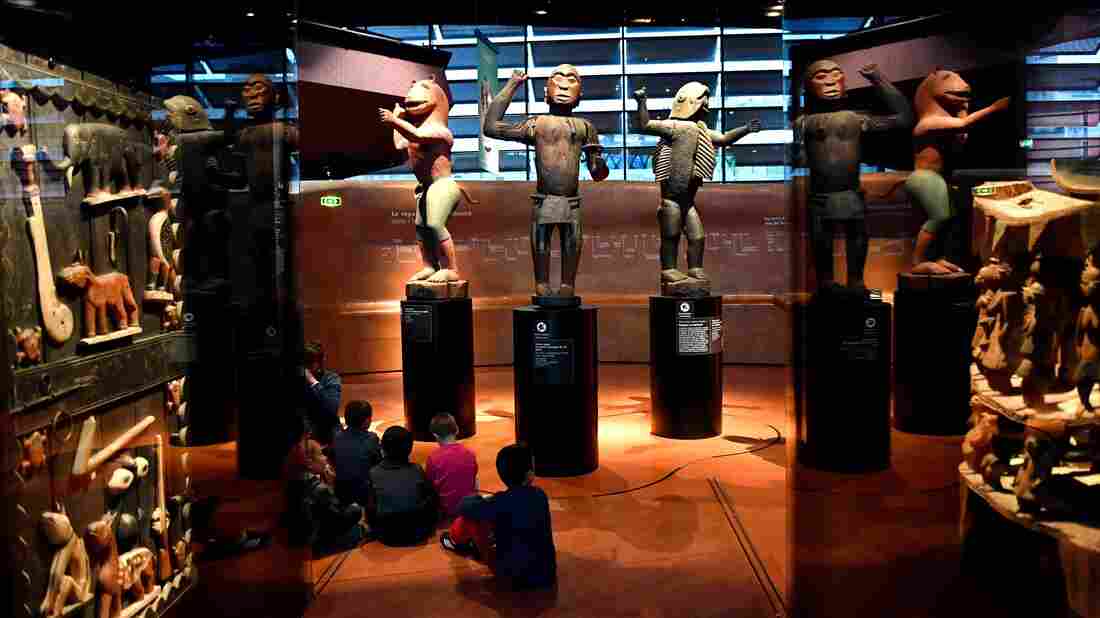 Big royal statues from the Kingdom of Dahomey, in present-day Benin, are pictured in 2018 at the Quai Branly Museum in Paris. Gerard Julien/AFP/Getty Images hide caption 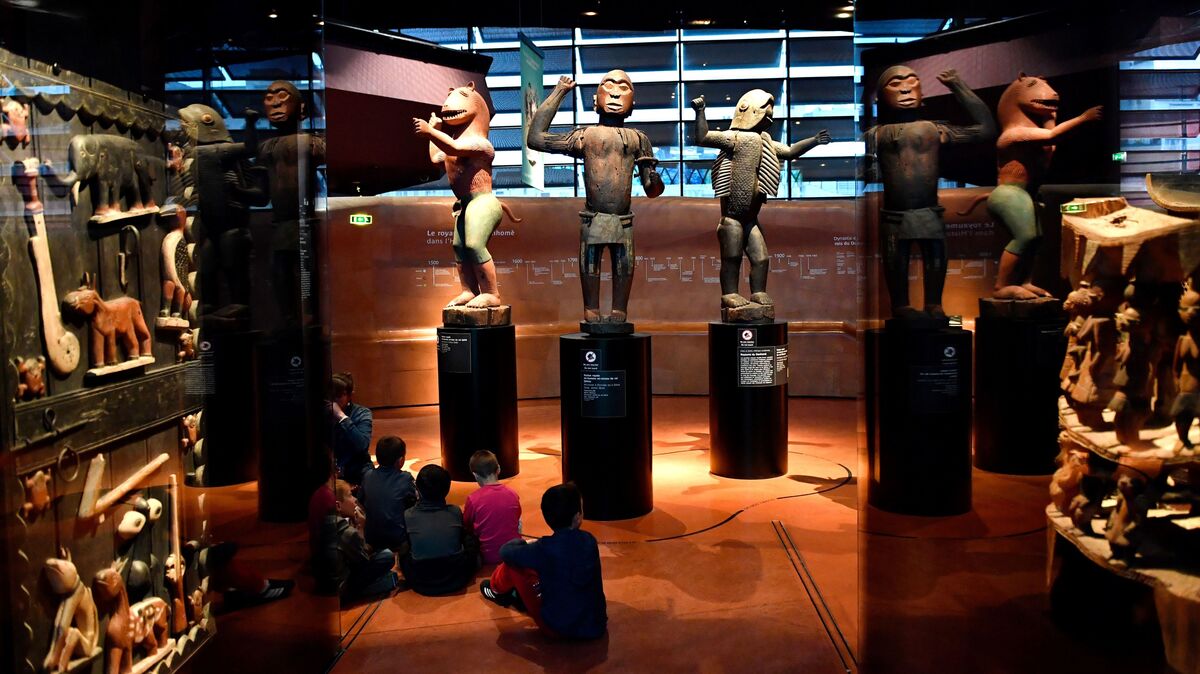 Big royal statues from the Kingdom of Dahomey, in present-day Benin, are pictured in 2018 at the Quai Branly Museum in Paris.

Early in the movie Black Panther, a black visitor played by Michael B. Jordan confronts a white curator over African artifacts in a fictional British museum.

"How do you think your ancestors got these?" the visitor asks. "You think they paid a fair price? Or did they take it — like they took everything else?"

The visitor turns out to be the villain of the movie. But a similar (if less ultimately violent) discussion is happening in museums around the world over the volume of African art in their collections. Officials in Germany and The Netherlands have announced plans to return art and artifacts taken from Africa during the colonial period. And more museum staff are meeting on the topic across Europe.

In 2006, France's Quai Branly museum lent a set of wooden statues and carved furniture to the country of Benin. Originally seized from the region by a French military expedition in 1892, they were housed in a Beninese museum called the Fondation Zinsou.

Marie-Cécile Zinsou, founder of the museum, says people lined up for 3 to 4 hours, and that visitors to the exhibition left lots of messages of gratitude in the visitors' book.

But they also wondered: "Why do these objects have to go back in France, exactly?" Zinsou says. "People were really saying, 'Do you think we could have them back for real, soon?'"

According to the most commonly cited figures from a 2007 UNESCO forum, 90% to 95% of sub-Saharan cultural artifacts are housed outside Africa. Many, like the works from Benin, were taken during the colonial period and ended up in museums across Europe and North America.

At the Africa Museum in Belgium, director Guido Gryseels says 85 percent of the museum's collection comes from the Congo — the site of Belgium's former colony in Central Africa.

"Some were brought by missionaries," Gryseels says. "Others were brought by civil servants ... also, some were resulting from military expeditions and sometimes even from plundering."

For decades, Congolese leaders have asked for these objects to be returned. Most of their requests, and those by African countries to other museums, have been refused — with some exceptions, particularly for human remains.

But recent events in Europe have raised the possibility of repatriations at a much larger scale. In addition to the plans announced in Germany, last year French President Emmanuel Macron commissioned a study of how much African art French museums are holding and to make recommendations about what to do with it.

Senegalese economist Felwine Sarr is one of the study's authors. "The problem is you can't lend people an object that fundamentally belongs to them," he says.

The study recommended the return of a wide range of objects taken during the colonial period by force — or where there's simply no documentation of consent. The report got mixed reviews in France, where Sarr estimates there are at least 90,000 African items in museums.

The vast majority are in just one, the state-owned Quai Branly in Paris. Its director, Stéphane Martin, said in an interview with radio station Europe 1 that restitution shouldn't be a dirty word,but that the report was too drastic: "Museums should not be the hostages of the unhappy history of colonialism," he said.

The wrangling over where art comes from and where it belongs isn't new. The most famous example is Greece's longstanding dispute with the British Museum over what the British call the Elgin marbles: sculptures from the Parthenon that have been at the London museum for almost 200 years. 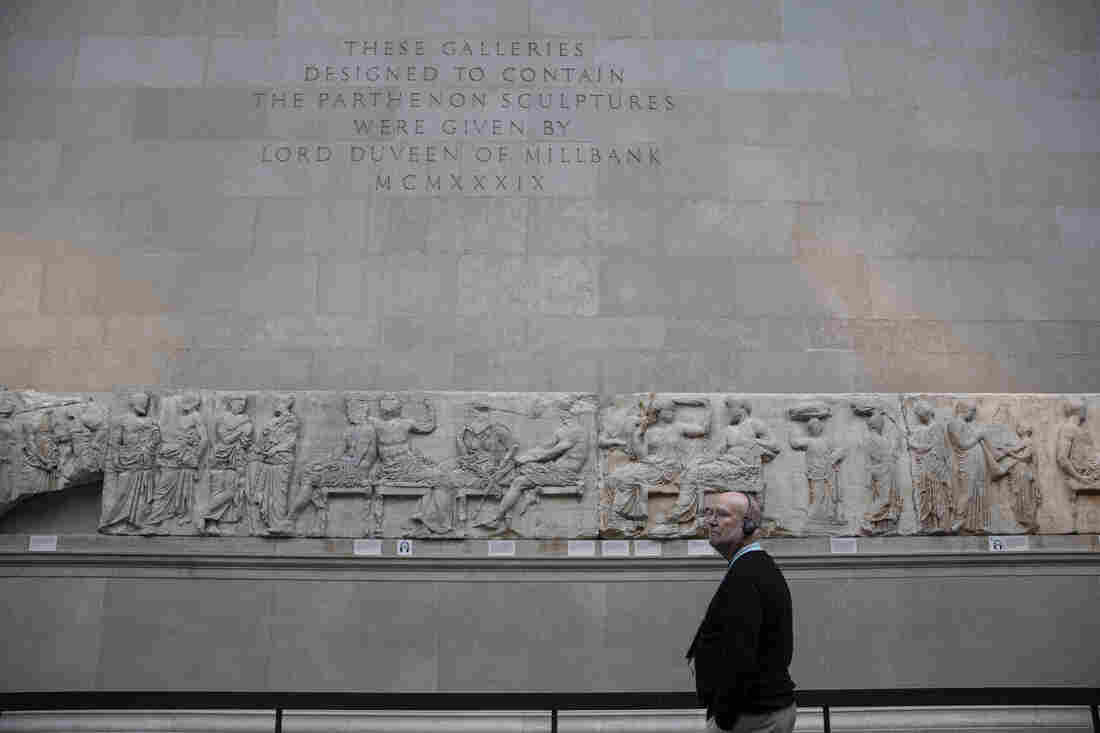 A tourist makes his way through classical sculptures from the Parthenon, also known as the Elgin marbles, at the British Museum in 2018. Dan Kitwood/Getty Images hide caption 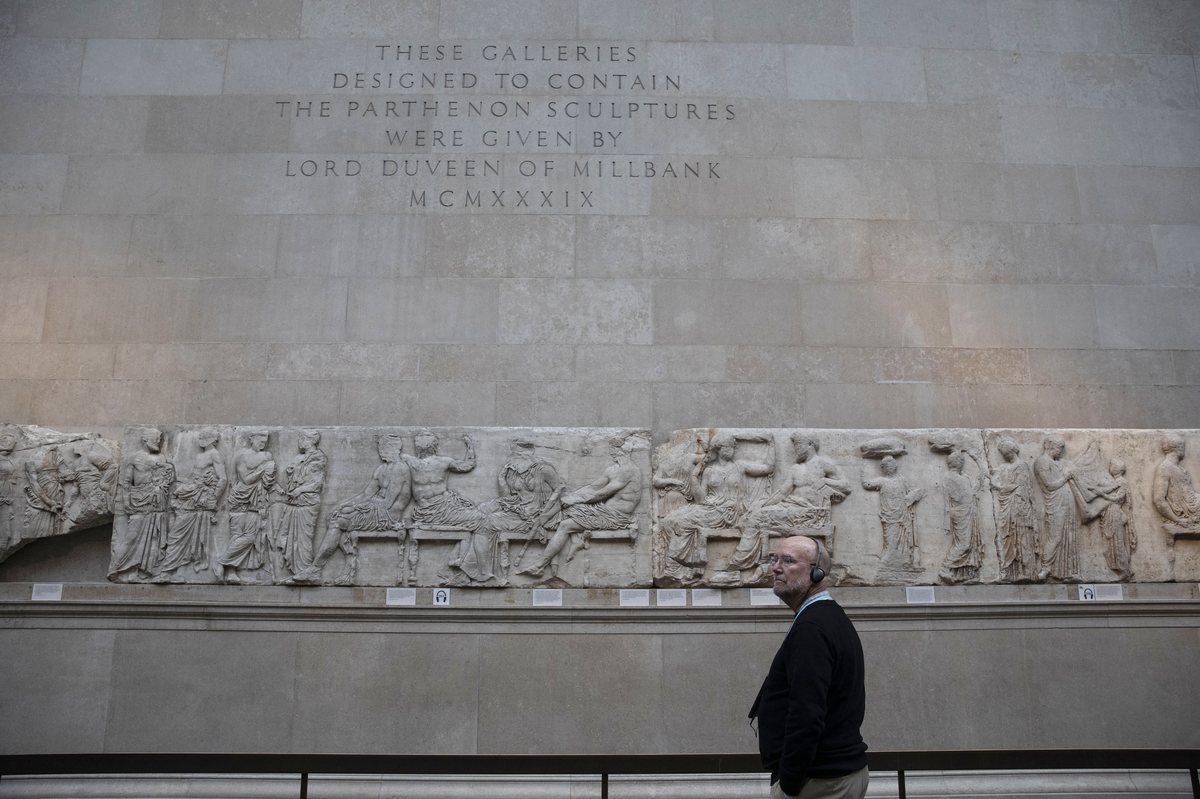 A tourist makes his way through classical sculptures from the Parthenon, also known as the Elgin marbles, at the British Museum in 2018.

Alexander Herman of the Institute of Art and Law in the U.K. says that in 2002, a group of directors from major international museums issued a general declaration on the topic of restitution. He characterized it as "claiming we shouldn't just be kowtowing to these claimant countries and giving everything back, and things need to be shared with a world audience, and we're the best places where this can happen."

That sentiment still lingers, he says — the Elgin marbles are still in the British Museum – but he does think that other fronts may be more open. For his part, Guido Gryseels of the Africa Museum in Belgium acknowledges that attitudes are changing.

"We are fully aware that it's not normal that such a large part of the African cultural heritage is in Europe or in Western museums," he says.

Gryssels says he's in discussion with his counterpart in the Congo to return works.

In France, some press coverage has suggested returns could leave vacant shelves in French museums. Cécile Fromont, a French historian of Central African art, says that's not going to happen. One way of thinking about it, she says, is that more African art can go on display.

"We are talking about hundreds of thousands of objects," Fromont says. "As somebody who wants to champion the display and study of the expressive art of the African continent, if we can get more objects on view — in more settings, in more museums, in more places around the world — that sounds like a great solution."

For now, those wooden objects from Benin are back at the Quai Branly. With a loan from the French Development Agency, Benin is constructing a new museum to receive them, set to open in 2021.

In July, the French Minister of Culture Franck Riester said the government was prepared to send them on loan to Benin even sooner. But it will take an act of the French Parliament to release them from the Quai Branly's collection definitively — and another law to allow for wider, permanent returns.