Accessibility links
Advocates Lend A Helping Hand To Mississippi Families Caught Up In ICE Raids After last week's ICE raids at poultry plants, families in Carthage, Miss., try to navigate a path forward with the help of a local church, immigration lawyers and social workers. 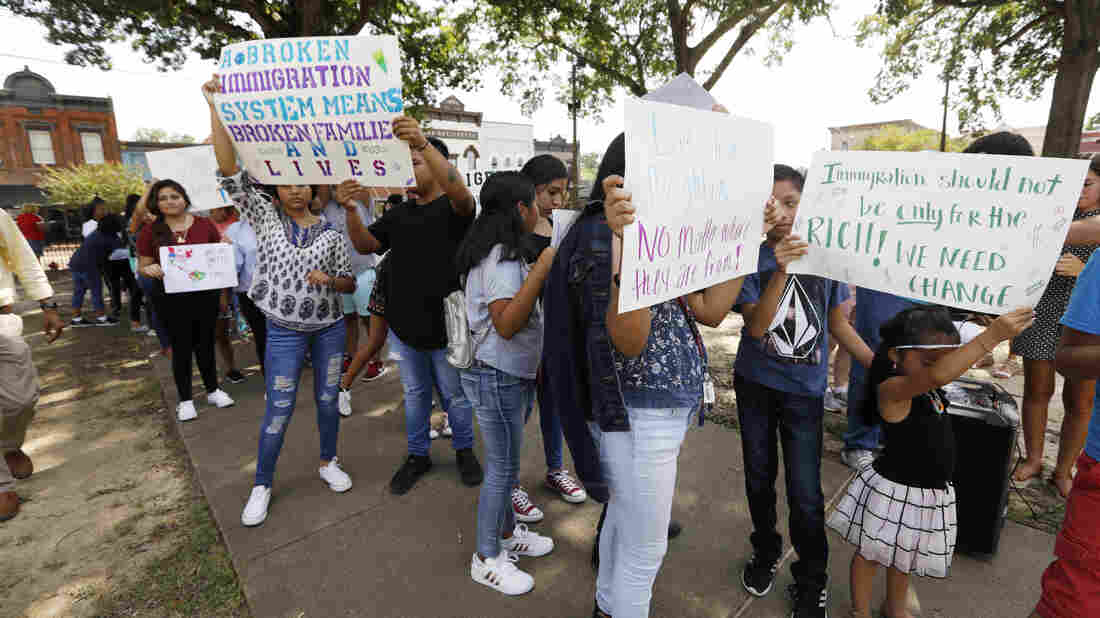 Children of mainly Latino immigrant parents hold signs in support of them and other individuals swept up during an immigration raid at a food processing plant in Mississippi. Rogelio V. Solis/AP hide caption 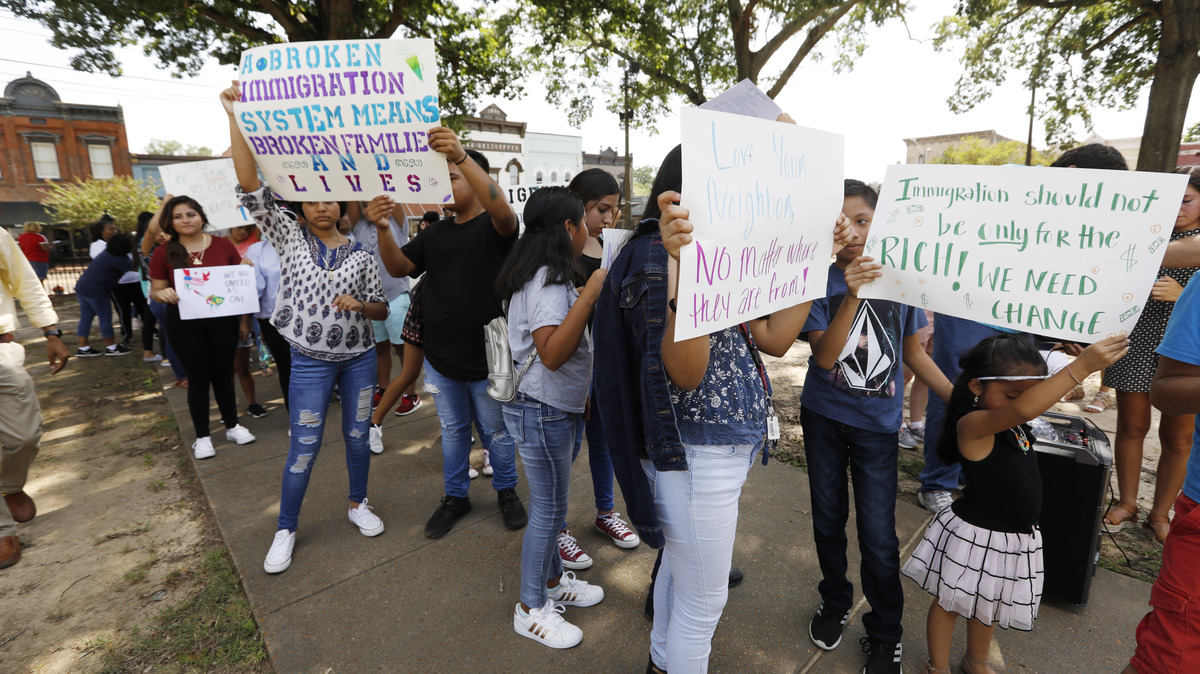 Children of mainly Latino immigrant parents hold signs in support of them and other individuals swept up during an immigration raid at a food processing plant in Mississippi.

The Mississippi ICE raids swept up nearly 700 undocumented workers from several food processing plants last week. Among those stripped away from their jobs and arrested was Angel Lopez's father.

"These past few days have just been hard because I've had to stay strong for my family," Angel Lopez says.

The 15-year-old and his two younger brothers were all born in the U.S. Their parents entered the country illegally from Guatemala 18 years ago and settled in Mississippi.

Since their father's arrest, the Lopez family has not been able to get in contact with him. The only information received are vague whereabouts, such as he's in Louisiana.

"I've just been mad about the whole thing really," Lopez says. "Cause the El Paso shooting had just happened a week ago and then why would you give an order like that for the raids that just happened like that? When people are still grieving?"

Federal authorities say these arrests shouldn't come as a surprise. The Department of Homeland Security says the operation had been anticipated for months; the timing is just unfortunate.

Mike Hurst, the U.S. attorney for the Southern District of Mississippi., says the raids are meant to enforce law and order.

"While we do welcome folks from other countries, they have to follow our laws," he says. "They have to abide by our rules. They have to come here legally or they shouldn't come here at all."

He warns that employers who "use illegal aliens for a competitive advantage or to make a quick buck — if we find that you have violated federal criminal law, we are coming after you." 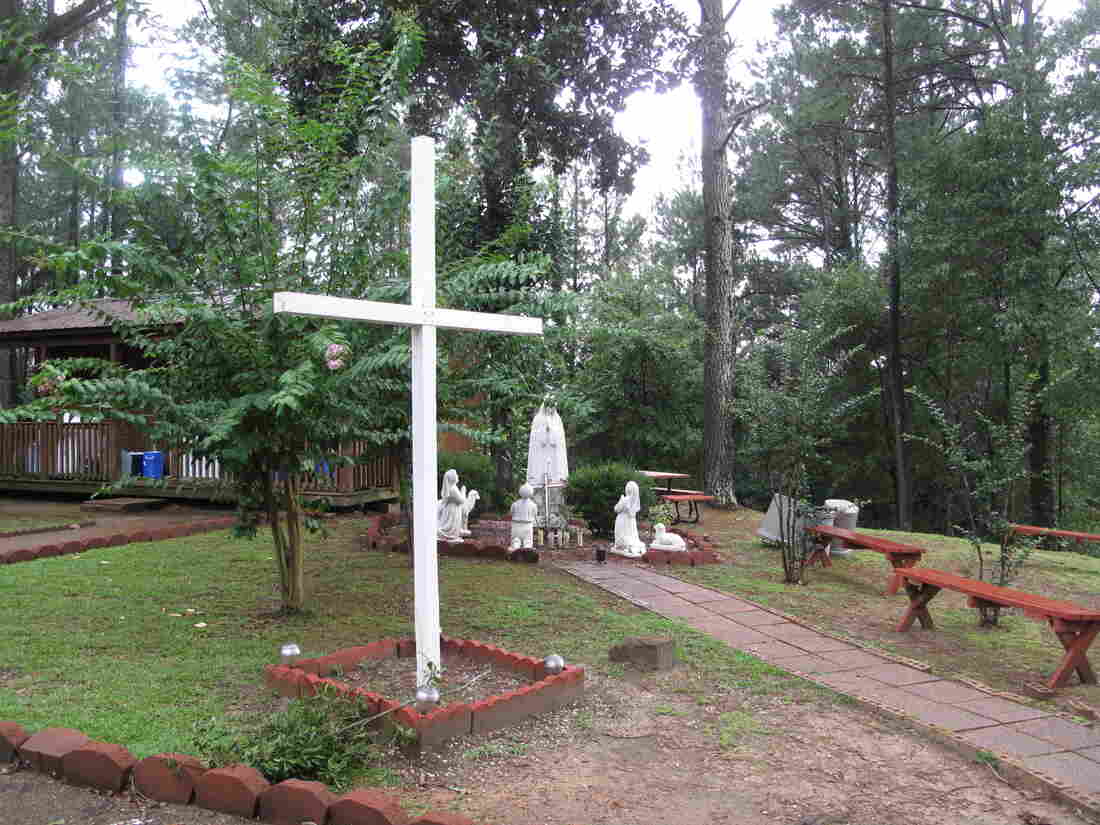 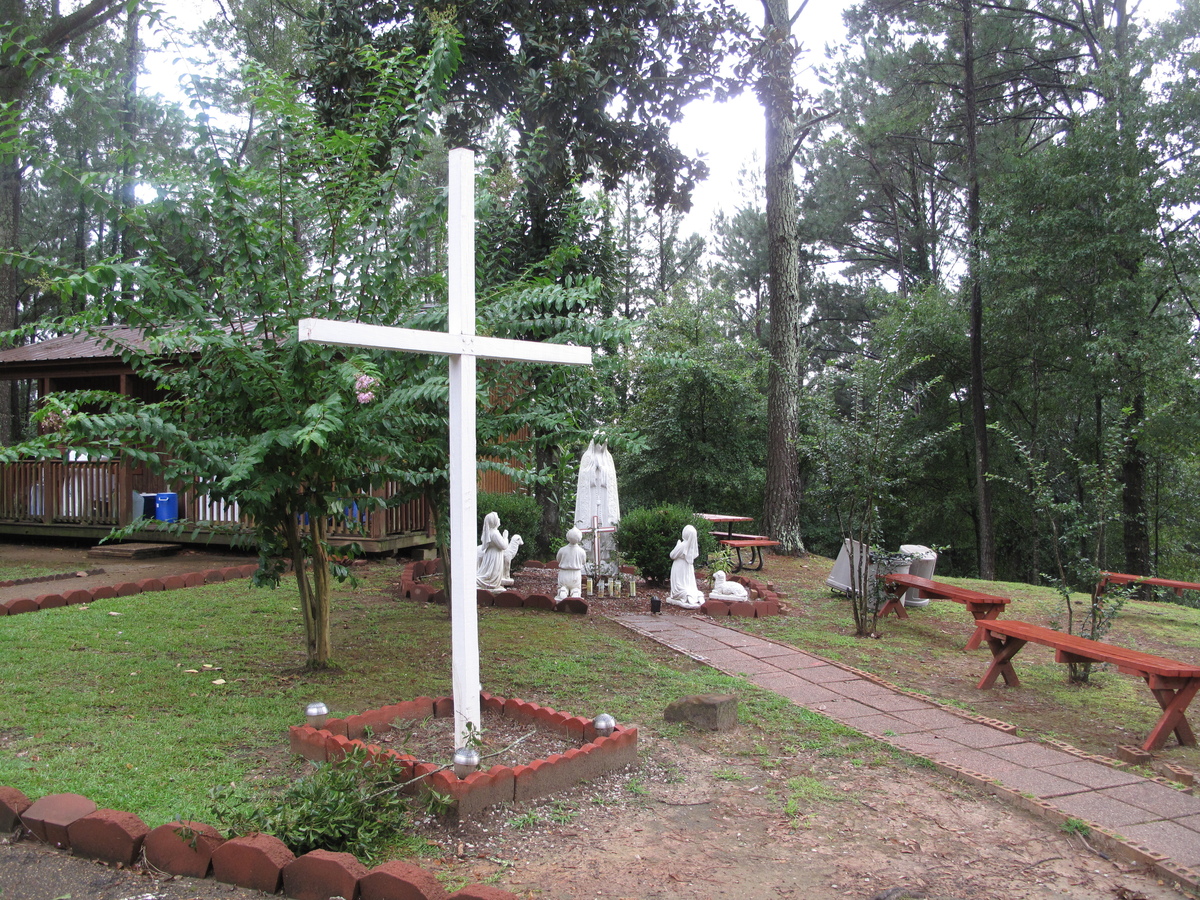 A white cross stands outside St. Anne Catholic Church in Carthage, Miss. The church has opened its doors to people who need legal advice, hot meals or counseling.

In light of the number of families affected by the raids, St. Anne Catholic Church in Carthage has opened its doors to people in need of legal advice, hot meals or counseling led by a social worker or child psychologist. Lopez's family, fearing their father's deportation, has looked to the church for guidance and support.

"My mom doesn't know what to do at this point because my dad was the one bringing in everything for us," Lopez says. "And seeing the way things are now, she's confused of what to do. Because she has to take care of her autistic son. And she has to provide for me and my brother."

Inside, the church is noticeably emptier than usual.

The Rev. Odel Medina estimates that at least 100 families from the 800-person parish are being affected. Some members are back after being released; others, however, still have not been heard from.

Some 300 Arrested In Mississippi Immigration Raids Have Been Released, Officials Say

"The system sees numbers," Medina says. "I know the people by name. I know that they are hard workers, they are people of faith, they are family people, community people. They were not at Walmart killing somebody else, they were working."

Evelyn is a 20-year-old born in Mississippi to parents who are originally from Guatemala. She asked not to disclose her last name because her father was also arrested. Her already-traumatized family fears further repercussions.

Her 10-year-old brother, Darby, was coming home from school during his first week back from summer break. He fights back tears while explaining how he discovered that his father wasn't home.

"And it was like the second day ... and I came back because I was knocking on the door. Nobody answered." 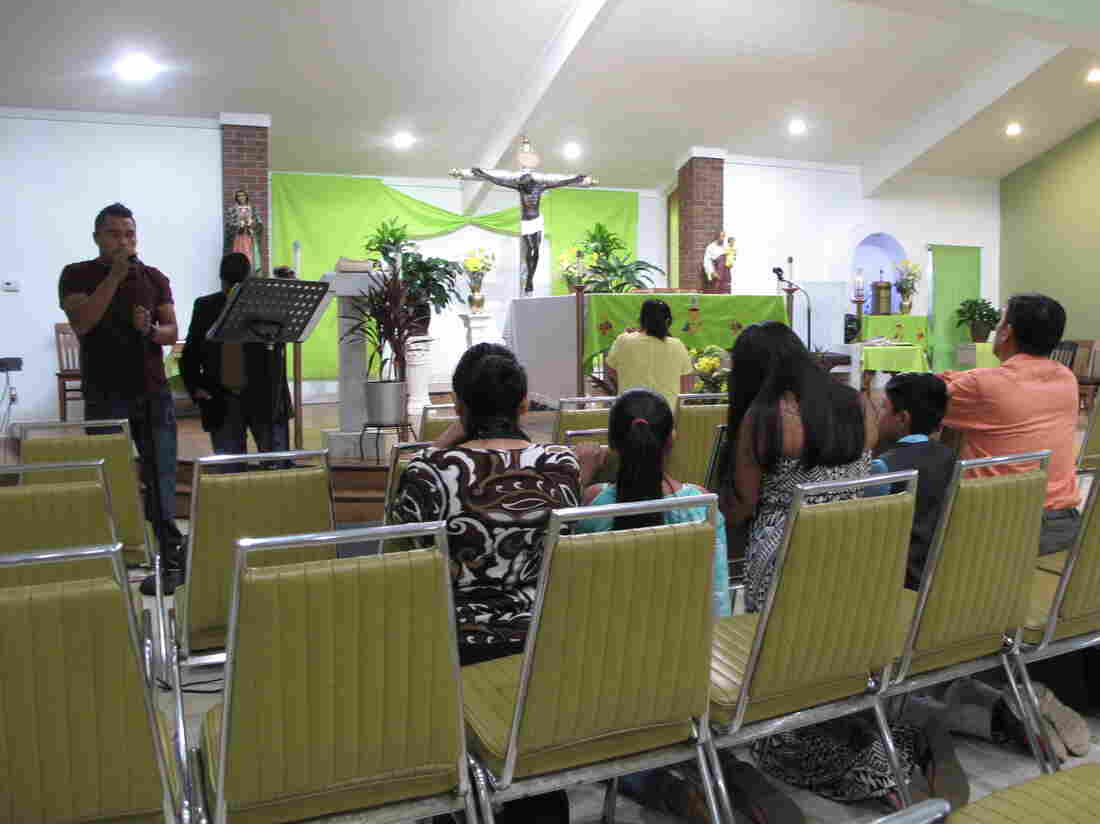 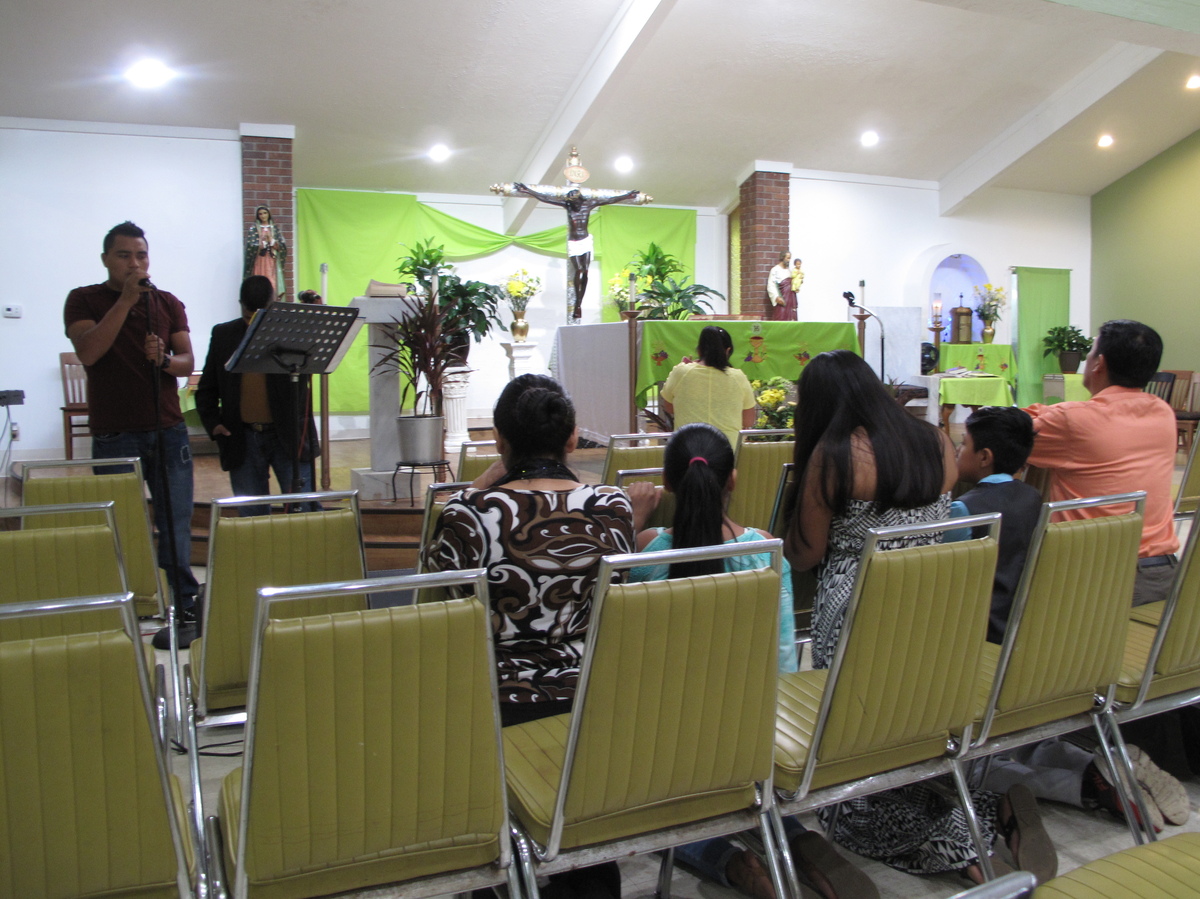 Church members at St. Anne Catholic Church in Carthage, Miss., kneel in collective prayer at a somber service over the weekend.

Darby eventually found his mother hiding inside a car with other relatives. She had been running late for work and therefore avoided arrest. Now she's afraid of returning to her job.

Evelyn says it took them days to find out her dad is being held in a detention center in Natchez, Miss., only three hours away from Carthage.

Her family has also come to the church to seek answers from lawyers, who have organized across several towns hit by the ICE raids, setting up makeshift legal clinics.

Attorney Amelia McGowan with the Mississippi Center for Justice says that in general, there are few immigration lawyers practicing in Mississippi who will work for free. But after news hit about the ICE raids, several hundred lawyers around the country signed up to help the state's devastated families.

"Many of these cases are going to be very long," she says. "They might take years to finish. And so we want to make sure that we have a sustainable network in place to really support people through the entire process."