Accessibility links
Police Crack Down On Protesters Occupying Hong Kong's Airport Operations at the major aviation hub initially appeared to be returning to normal early Tuesday, but by the afternoon, hundreds of pro-democracy activists had returned to departure areas. 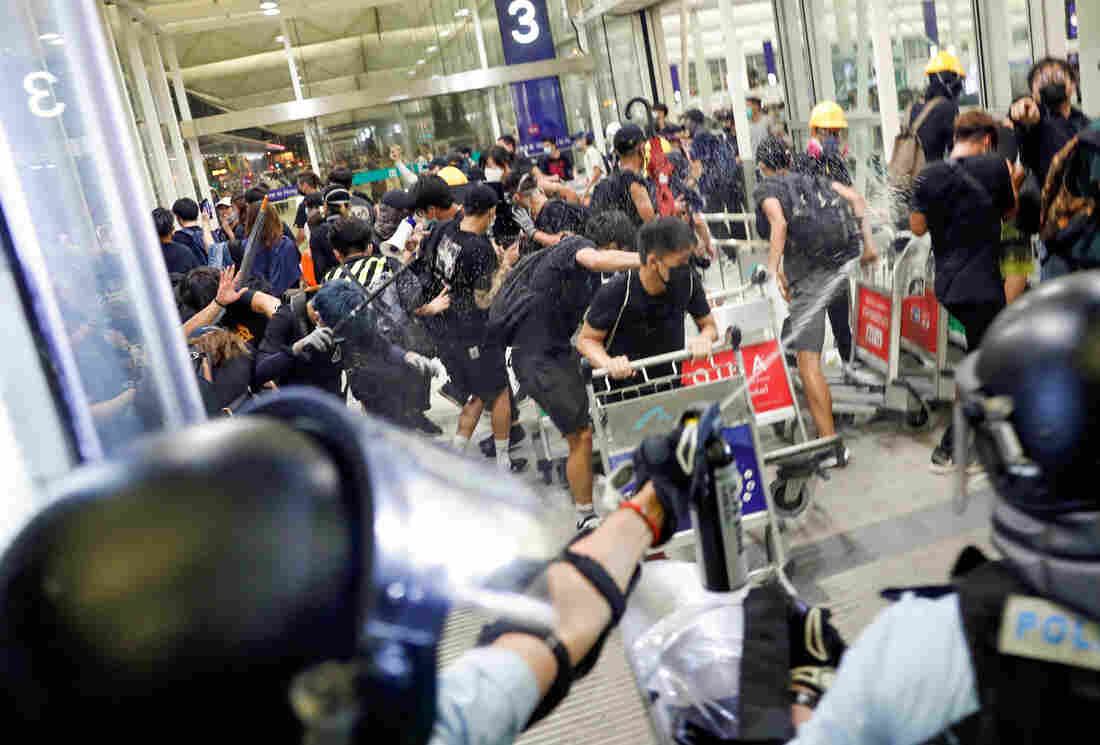 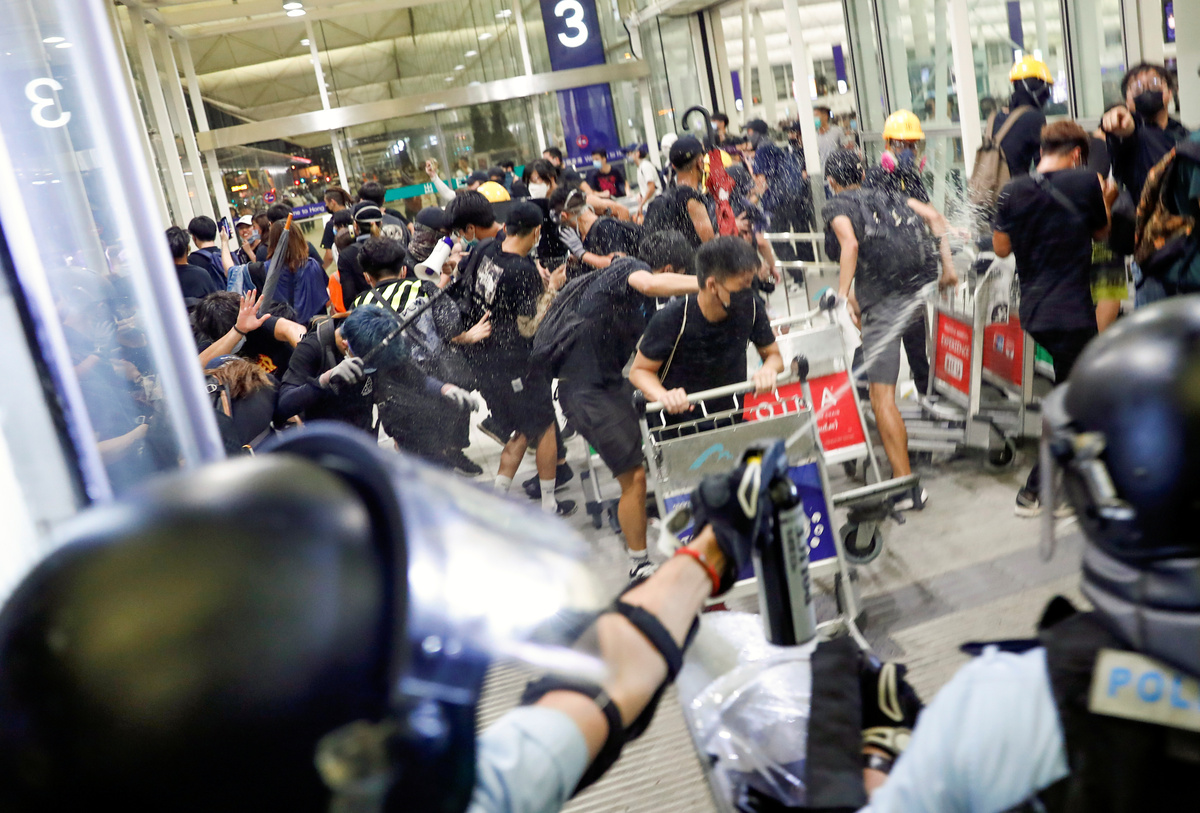 Riot police use pepper spray to disperse protesters during a mass demonstration at the Hong Kong International Airport.

Hong Kong police cracked down on pro-democracy protesters demonstrating Tuesday at Hong Kong International Airport after they caused serious flight disruptions for a second day at one of the world's busiest aviation hubs.

Television footage showed tense confrontations late Tuesday between protesters wearing masks and local police. Protesters appeared to be barricading themselves inside a terminal using luggage carts as police tried to get them to leave. 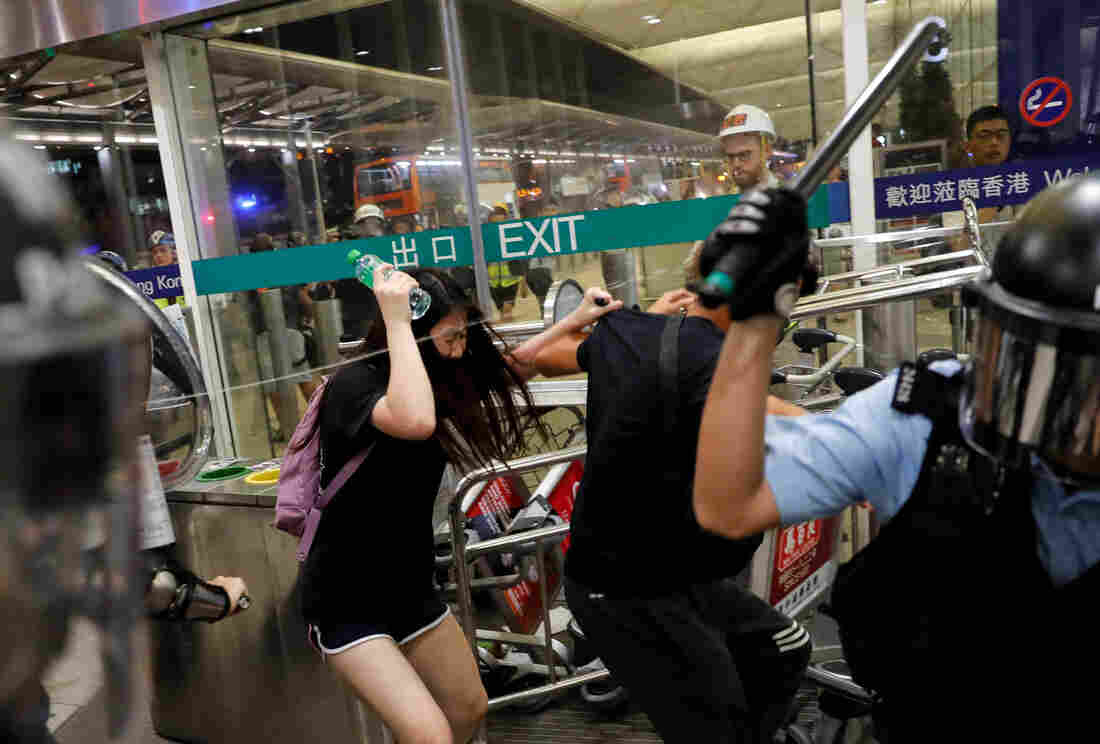 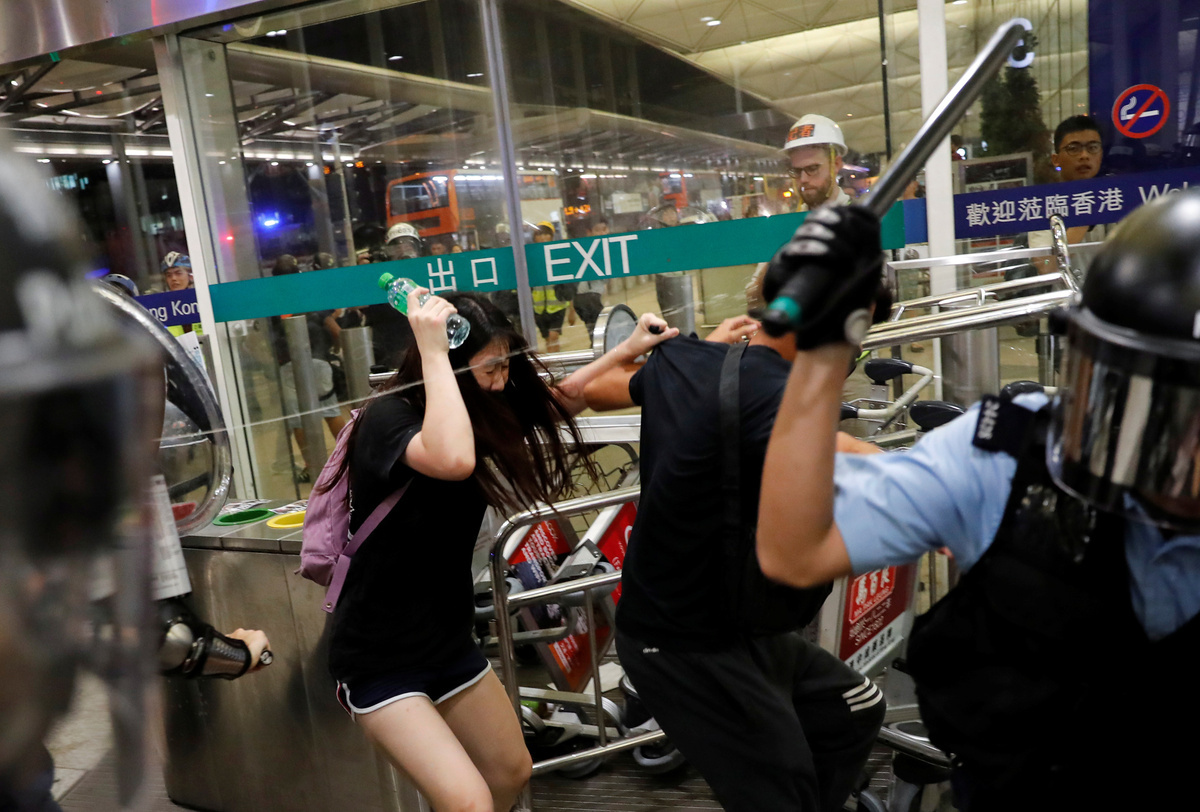 Riot police use pepper spray to disperse protesters at the airport.

The footage showed scuffles breaking out, and some of the protesters were handcuffed and led away by police. Security forces used pepper spray against the demonstrators, according to Reuters.

In a statement, the authority said, "Airport operations ... have been seriously disrupted, all departures have been cancelled. All passengers are advised to leave the terminal buildings as soon as possible." 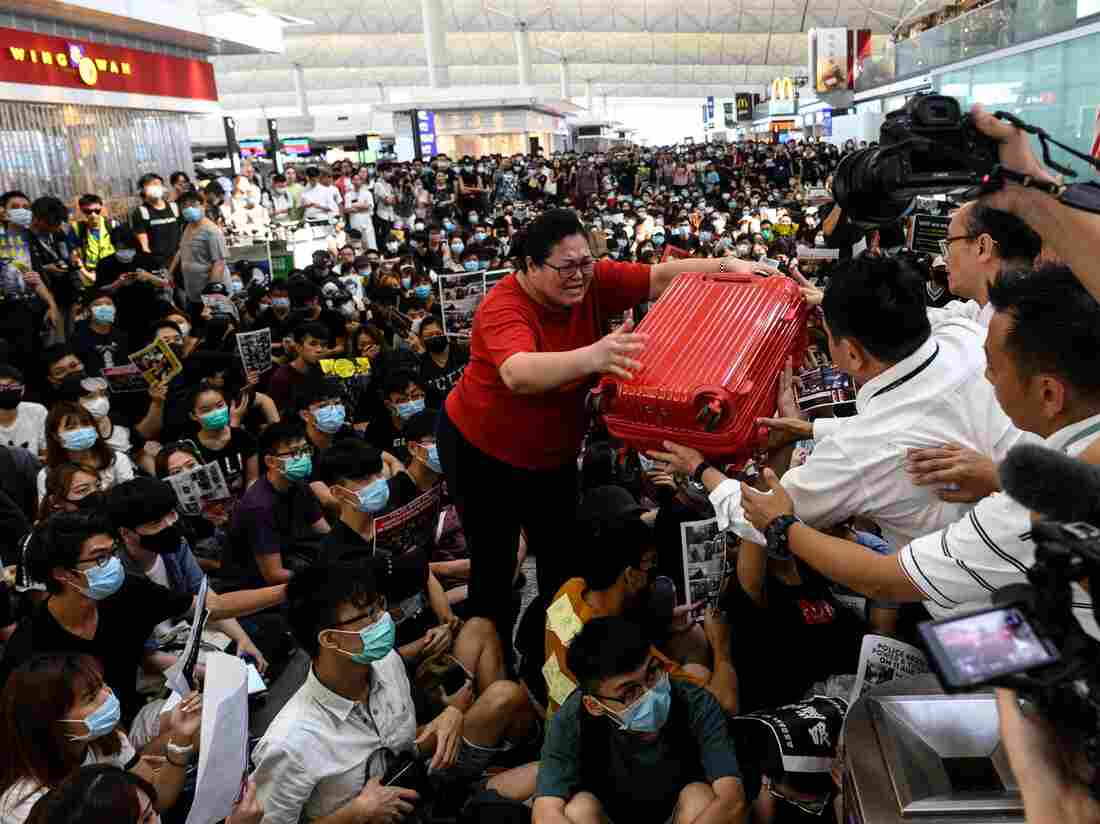 A tourist gives her luggage to security guards as she tries to enter the departures gate during another demonstration by pro-democracy protesters at Hong Kong International Airport on Tuesday. Philip Fong/AFP/Getty Images hide caption 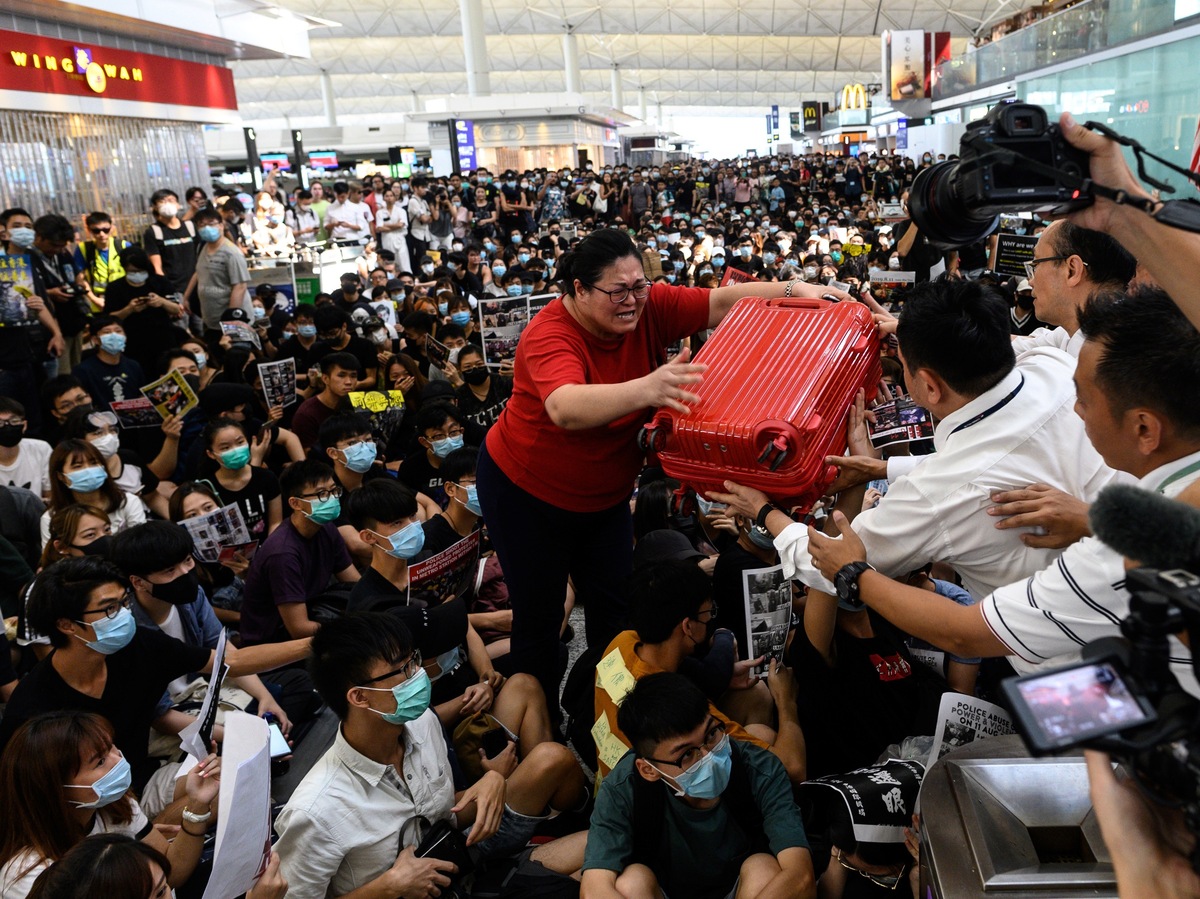 A tourist gives her luggage to security guards as she tries to enter the departures gate during another demonstration by pro-democracy protesters at Hong Kong International Airport on Tuesday.

Later in the evening, some flights were taking off, though the airport was not allowing passengers to check in after 4:30 p.m. local time. "Other departure and arrival flights for the rest of the day will continue to operate, and airlines will provide arrangements for passengers who have not completed the departure process," an airport spokesperson said in an email to NPR.

The airport is a major cargo hub. Cargo flights out of Hong Kong appeared to be operating relatively normally, with some delays.

The Airport Authority of Hong Kong has advised that all check-in services for departing flights have been suspended.
Passengers are advised not to proceed to the airport. 1/2

At the beginning of the day on Tuesday, airport operations had appeared to be slowly returning to normal after protests on Monday led to more than 300 flights being canceled.

By Tuesday afternoon, however, hundreds were again occupying the airport's departure areas, disrupting check-ins and security clearing. Meanwhile, at least 1,000 activists were still in the arrivals area of the airport, according to The South China Morning Post.

Frustrated passengers, holding their luggage above the seated demonstrators, tried to navigate the sea of protesters.

Following a police crackdown on protests elsewhere in the city over the weekend, the airport sit-in — which began on Friday and was meant to last three days — was briefly expanded, spilling over into the departures hall, but then seemed to tail off. By Tuesday afternoon in Hong Kong, however, the crowds of protesters had returned.

A total of 310 flights were canceled in the 24 hours from midnight Monday in Hong Kong, according to the Post, a Hong Kong-based English-language daily.

Although the days of demonstrations in the airport were peaceful, police responded with force to protests in other parts of the city. Officers stormed a subway station at Kwai Fong, located in the city's northern New Territories, firing tear gas and beating protesters with batons.

In a protest on Sunday, one activist, a young woman, reportedly suffered a serious eye injury when police fired nonlethal rounds at protesters. Some of the protesters donned eye patches in sympathy with the injured woman.

Hong Kong's chief executive, Carrie Lam, defended police action against the demonstrators, saying authorities were trying to use "the lowest level of force" to deal with the protesters. But she echoed ominous statements last week from Beijing, warning that violence would lead Hong Kong "down a path of no return."

Speaking at a news conference on Tuesday, Lam said the demonstrations, now in their 10th week, had pushed the city into "a state of panic and chaos."

"After the violence has been stopped and the chaotic situation subsides... I will be responsible [for] rebuilding Hong Kong's economy, to listen as attentively as possible to my people's grievances and [for] trying to help Hong Kong to move on," she said.

Lam's comments followed a second week of strong admonishments from Beijing. Yang Guang, a spokesman for China's Hong Kong and Macau Affairs office, stepped up his harsh words about the protests, saying they "constituted serious crimes with sprouts of terrorism emerging."

Hong Kong, a former British colony, was returned to China in 1997 under an agreement between London and Beijing guaranteeing the city a high degree of autonomy. Under a pledged "one country, two systems" approach, China was to allow Hong Kong to pass its own laws and maintain its own judicial system.

However, pro-democracy activists say Beijing has reneged on many of those promises and that Hong Kong's China-appointed chief executive and hand-picked Legislative Council have become a rubber stamp for Beijing.

The latest protests were sparked by an extradition law that would have allowed some people accused of crimes in Hong Kong to be tried in mainland China. Although the Hong Kong government has backed off the proposed law, protesters want to see it killed altogether. Their demands have also expanded to include a freely elected legislature and direct elections for the chief executive.