Accessibility links
Bernie Sanders, Sounding Like Trump, Goes After Amazon And Washington Post The newspaper's editor accused Sanders of peddling a "conspiracy theory" about the influence of the paper's owner, Jeff Bezos, who is also the founder and CEO of Amazon. 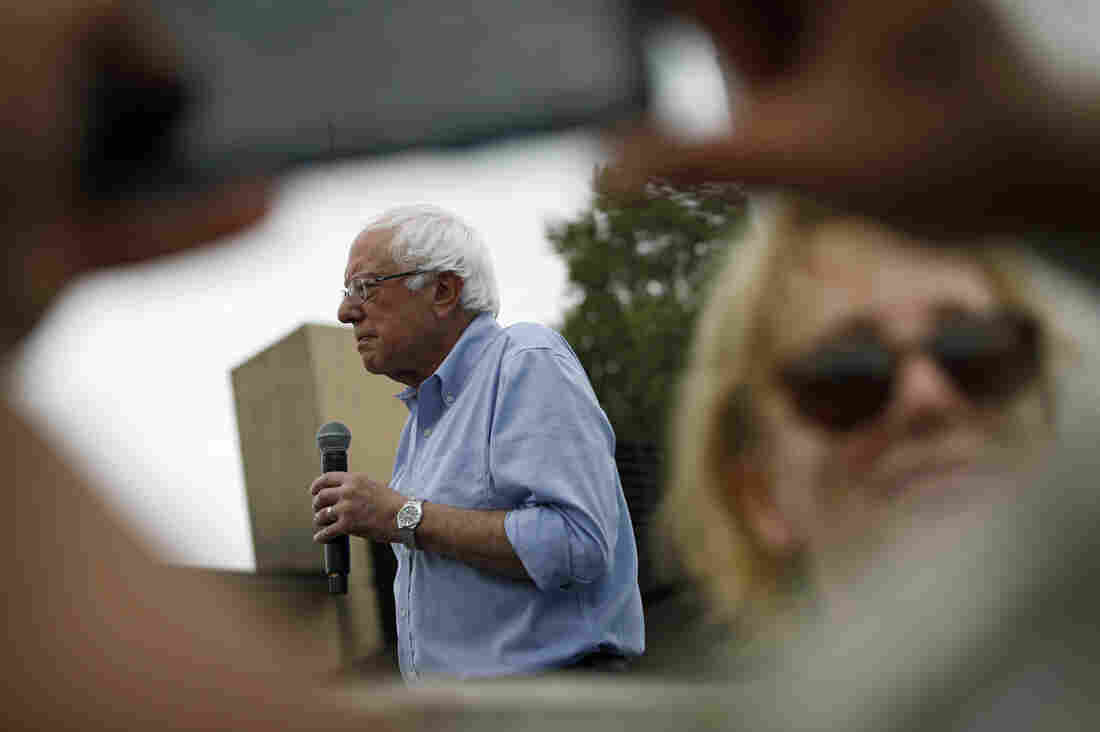 Democratic presidential candidate Sen. Bernie Sanders, seen at the Iowa State Fair on Sunday, has lashed out at The Washington Post over coverage of his presidential campaign. John Locher/AP hide caption 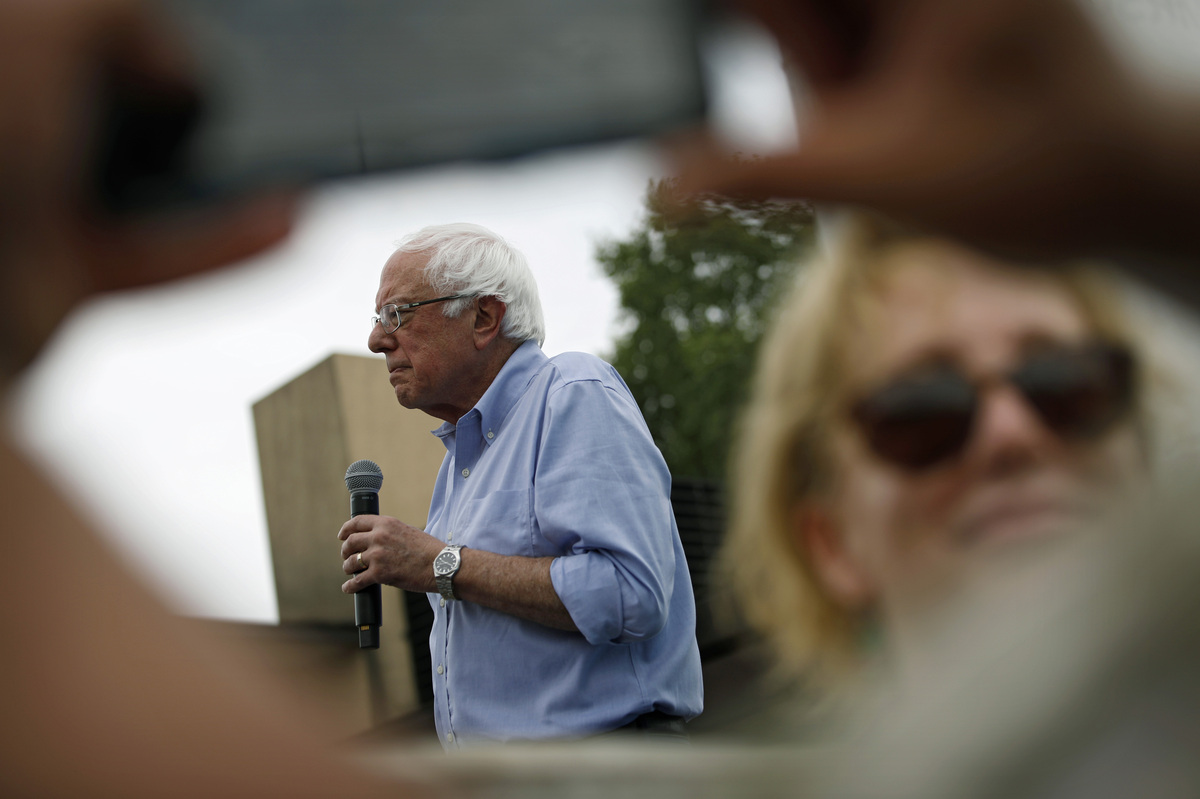 Democratic presidential candidate Sen. Bernie Sanders, seen at the Iowa State Fair on Sunday, has lashed out at The Washington Post over coverage of his presidential campaign.

Sen. Bernie Sanders of Vermont is lashing out at the media coverage of his presidential campaign — in a way that might sound familiar.

"I talk about that all of the time," Sanders said of Amazon paying "nothing" in taxes.

"And then I wonder why The Washington Post, which is owned by Jeff Bezos, who owns Amazon, doesn't write particularly good articles about me. I don't know why," he said at a campaign event in New Hampshire on Tuesday. Bezos is the founder and CEO of Amazon and privately purchased The Post.

The remark sounded an awful lot like the kind of criticism leveled by someone else.

"...[T]he failing New York Times and the Amazon Washington Post do nothing but write bad stories even on very positive achievements - and they will never change!" President Trump tweeted last year.

...and the Amazon Washington Post do nothing but write bad stories even on very positive achievements - and they will never change!

Trump has tweeted or retweeted criticism of the paper, tying it to Amazon more than 20 times since his campaign for president. Candidates voice criticism of the media all the time in an attempt to curry better coverage. Every campaign pushes back against stories it thinks were done unfairly, including Democratic presidential candidates in this field. Former Vice President Joe Biden's campaign does not like what it sees as the media's focus on his gaffes, and entrepreneur Andrew Yang's loyal followers don't believe he gets enough coverage.

But none are echoing the president's language or accusing news outlets' owners of influencing coverage in quite the same way. The Post's editor, Marty Baron, noted that Bezos does not influence the newspaper's coverage and accused Sanders of peddling a "conspiracy theory."

"Sen. Sanders is a member of a large club of politicians — of every ideology — who complain about their coverage," Baron said. "Contrary to the conspiracy theory the senator seems to favor, Jeff Bezos allows our newsroom to operate with full independence, as our reporters and editors can attest."

Sanders pivoted Tuesday afternoon, saying that his criticism was more of a general one of corporate-owned media and that he doesn't believe Bezos was on the phone directing coverage.

"So this is not into conspiracy theory," Sanders told CNN. "We are taking on corporate America. Large corporations own the media in America, by and large, and I think there is a framework, about how the corporate media focuses on politics. That is my concern. It's not that Jeff Bezos is on the phone every day; he's not."

Sanders went on to criticize Trump for lambasting the media and calling them the "enemy of the people." He called that a "disgusting remark which undermines American democracy."

Sanders added, "There are some really great articles out there, like investigations, which we use, so I don't think media is fake news."

The Post reported last month on a labor fight within the Sanders campaign. It noted that workers wanted annual salaries at least equivalent to a $15 an hour minimum wage, coverage of health care costs for those making $60,000 a year or less and reimbursement for travel and use of their own vehicles at $0.58 a mile.

Sanders has argued that Amazon, the online shopping behemoth, should pay more in taxes and pay its workers more. Several communities, for example, had offered tax abatements in exchange for Amazon setting up its second headquarters to their cities, and it's unclear whether Amazon paid anything in taxes at all last year, The Wall Street Journal reported. Amazon moved part of what would have been its second headquarters out of New York recently because of protests against the deal the city gave it.

Sanders has been critical of corporations, including Amazon, that do not or did not have a $15 minimum wage, the level he wants to be a federal minimum. Facing pressure, including from Sanders, Amazon raised its minimum wage to $15 in October of last year.

Sanders has also introduced the Stop BEZOS Act, (BAD EMPLOYERS BY ZEROING OUT SUBSIDIES), which would, according to Sanders' Senate office:

There appeared to be a detente between Sanders and Bezos with the move to raise Amazon's minimum wage in October. Sanders praised the move, calling it "enormously important."

Bezos replied on Twitter, saying he was "excited about this" and that he hoped "others will join in."

Thank you @SenSanders. We’re excited about this, and also hope others will join in. https://t.co/kasWkkOhWo

While Sanders has again shown fundraising strength during his 2020 presidential bid, he has struggled to gain the kind of traction he had in the 2016 presidential election.

He is competing with a much broader field of progressive candidates, including Sen. Elizabeth Warren of Massachusetts, who has now passed him in an average of national polls. She is ahead of him in the key early states of Iowa and polling close to him in New Hampshire, where Sanders won handily in the 2016 primary.

Note: Amazon is one of NPR's sponsors.

A previous version of this story incorrectly said Amazon and The Washington Post share a parent company. The newspaper is not directly connected to the online retailer. Additionally, a Web summary on the homepage incorrectly said Bezos owns Amazon. He is the founder and CEO.