Accessibility links
Wet, Wild And High: Lakes And Rivers Wreak Havoc Across Midwest, South Parts of the Mississippi have been above flood stage for months. All of the Great Lakes are at or near record-high levels. It's halting barge traffic, damaging infrastructure and eroding shorelines. 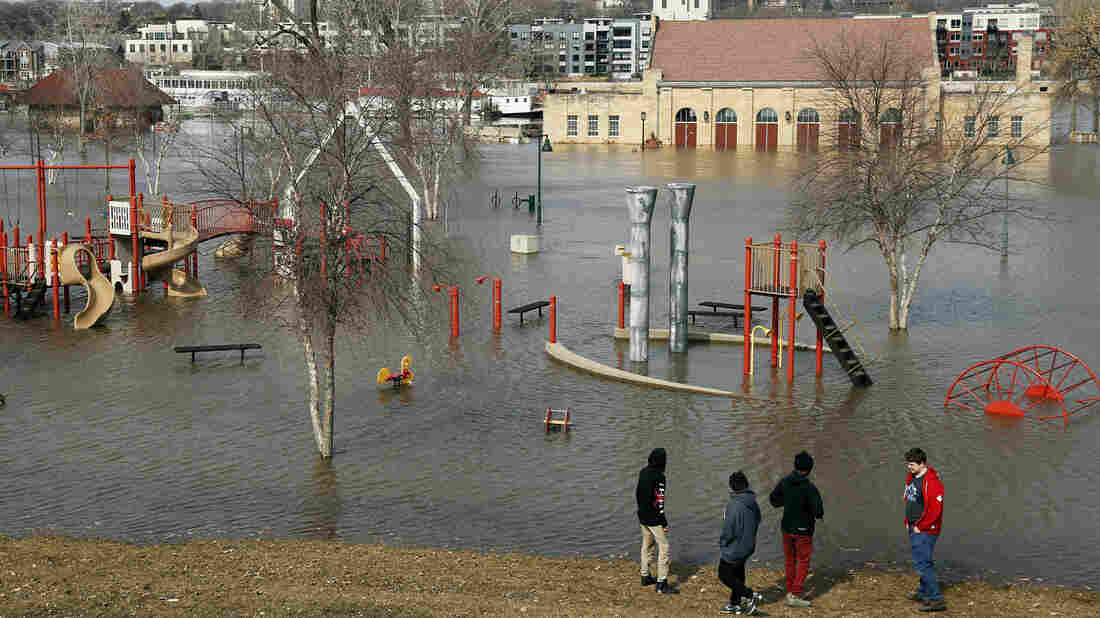 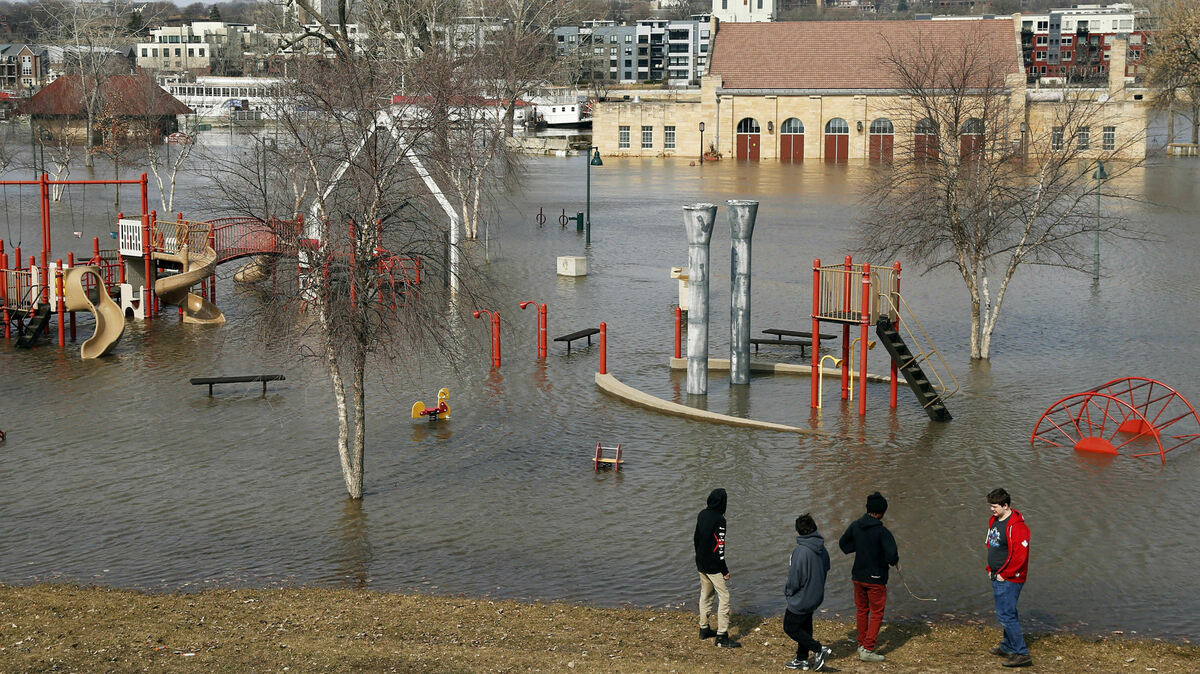 Mississippi River floodwaters inundate the pavilion and a play area at Harriet Island in St. Paul, Minn., this past March.

"Water, water everywhere." That line from poet Samuel Taylor Coleridge could be the mantra for rain-weary residents across the country. Some regions have seen record amounts of rain since early spring. The Mississippi River and tributaries spent months above flood stage, while all of the Great Lakes are nearly at or above historic highs.

Keith Kompoltowicz, chief of watershed hydrology for the U.S. Army Corps of Engineers in Detroit, says data show that the Great Lakes have been on the rise for several years, especially in recent months.

"In the months of April and May we had extremely wet weather across the Great Lakes Basin," says Kompoltowicz, "and that caused the lakes to rise very quickly this spring and brought us to where we are, either setting records or approaching records, depending on the lake."

Small Towns Fear They Are Unprepared For Future Climate-Driven Flooding

For several years, it was record low water levels in the Great Lakes that were worrying people. Lake Michigan and Lake Huron reached their lowest levels ever in January 2013. Now the opposite is true. As heavy winter snows melted and joined water pouring into the lakes from rivers swollen with spring rainfall, Lakes Superior, Erie and Ontario reached unprecedented high levels this year. In early August, they were 1 to 6 inches above the monthly August record for those waterways, while Lakes Michigan and Huron were just 2 inches shy of their record water level for the month.

Joel Brammeier, president and CEO of the Alliance for the Great Lakes, says it's a natural phenomenon for the lakes to rise and fall, but this extended rise is unusual. Some attribute it, in part, to a change in climate patterns. Brammeier adds that intense storms also lead to more pollution running off into the lakes.

"In Western Lake Erie, for example, you're seeing massive blooms of algae that are sometimes toxic to people and pets that are being caused by this concentration of agricultural fertilizer washing off into Lake Erie," says Brammeier. Runoff from city streets causes pollution problems, too.

And it's not just the lakes. The Mississippi River has had a historic record high water season for months now. The river and its tributaries have flooded millions of acres of farmland; damaged roads and levees; slowed commercial river traffic; and affected downstream fisheries. Paul Osman with the Illinois Office of Water Resources says some of the greatest damage, though, often occurs in neighborhoods far from a river or lake because older communities don't have the capacity sometimes to handle intense rainfall.

"And it will deluge an old, archaic stormwater or drainage system, and basements fill up, and houses nowhere near the flood plain suddenly find themselves underwater," he says.

Here are a few examples of areas affected by the record high waters:

Juneway Terrace Beach, a small beach on Chicago's far North Side, is one of two of the city's beaches that are submerged by Lake Michigan waters. A beach sidewalk is broken into pieces, and there are barriers around a huge sinkhole. Artist Jenny Learner lives in an apartment building adjacent to the beach. She says the steel girders and rocks buttressing the building just aren't enough. 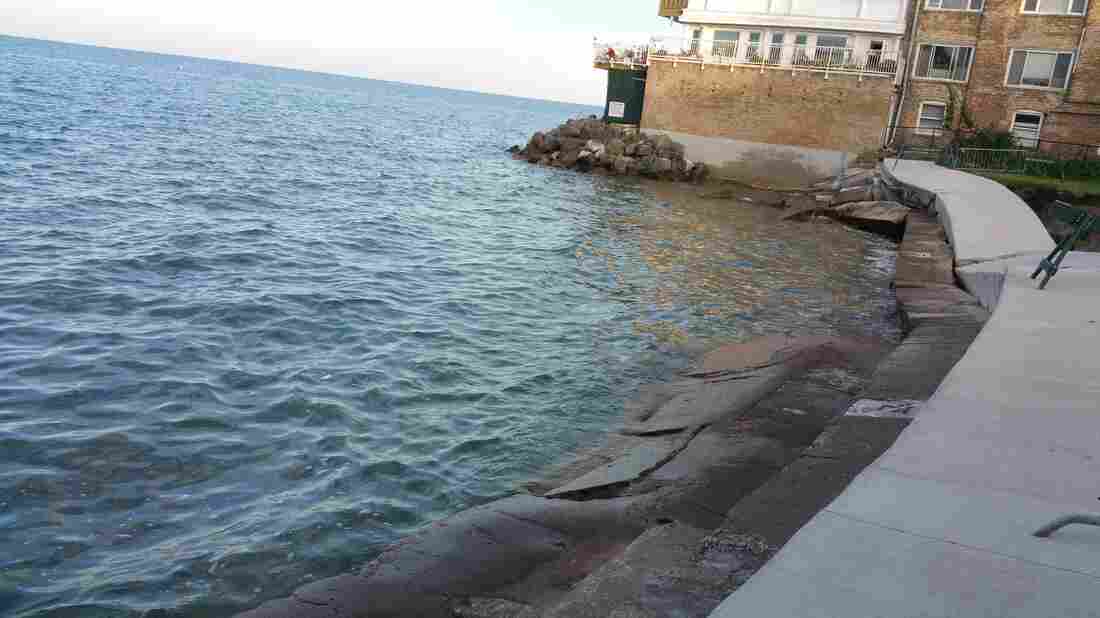 This summer, the high waters of Lake Michigan submerged the Juneway Terrace Beach in Chicago. Residents of an adjacent apartment building say they feel it is at risk. The beach sidewalk was also smashed, and barriers surround a sinkhole. Cheryl Corley/NPR hide caption 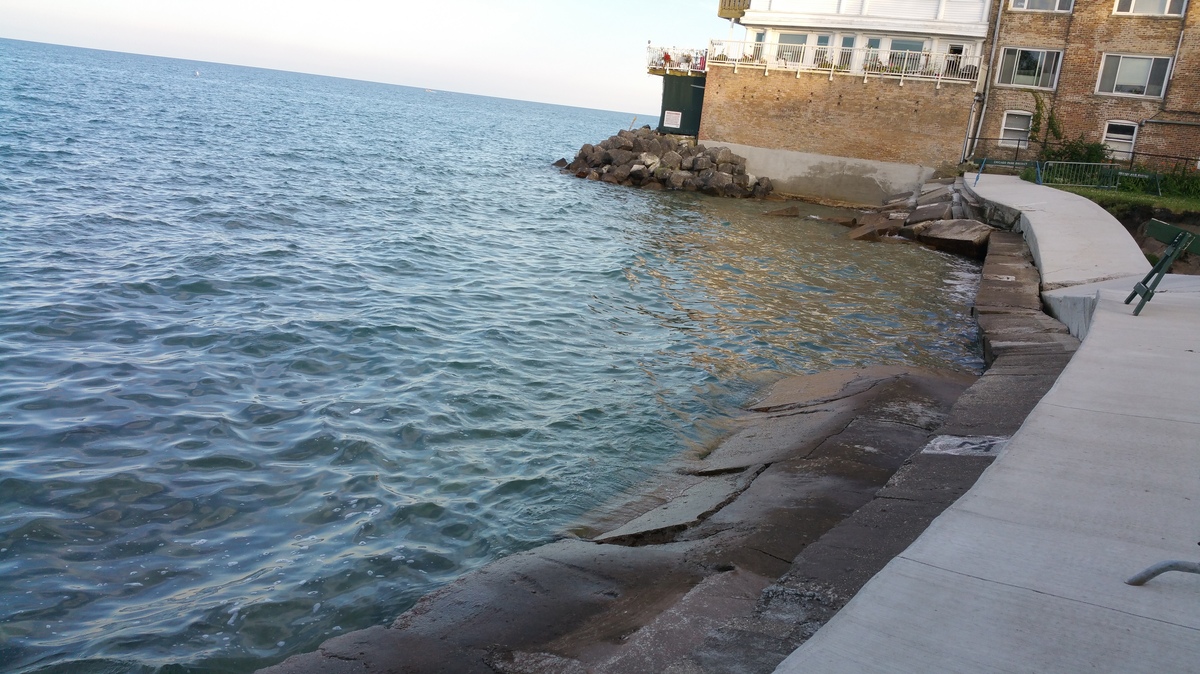 This summer, the high waters of Lake Michigan submerged the Juneway Terrace Beach in Chicago. Residents of an adjacent apartment building say they feel it is at risk. The beach sidewalk was also smashed, and barriers surround a sinkhole.

"The waves hit my kitchen window, and my dining room window. Extremely powerful waves," she says, "and they have no place to go, if they don't have a barrier. It's a crisis. Not just for me personally, it's a crisis for the whole city."

Crews are at work rebuilding the Lake Walk at the edge of Lake Superior. Project supervisor Mike Labeau says that in just one year, three major storms with waves as high as 25 feet caused about $25 million in damage. Labeau says the latest storm, in 2018, took away acres of land.

"It undermined the boardwalk. It undermined the buried electrical wiring for the lights. It moved a lot of material including some very large rocks just back out into the lake," Labeau says. "So it's been very hard for the city to catch its breath, frankly."

Alexandria is home to several fishing and recreational lakes. Greg Bowen, owner of Brophy Lake Resort, says he has never seen the water stay so high for so long.

"It's eroding our shore, so that's an impact to us to where I'm going to have to spend, you know, a fair amount of money to re-boulder my shore down here or I'm going to lose my precious, my precious land that I need for my beach and for my trailers and for everything else," he says. "So that's a big impact for us."

In early June, hundreds of barges full of steel, grain and other commodities floated to a standstill outside Cairo, Ill., located at the confluence of the swollen Ohio and Mississippi rivers. When water levels are too high, it's not safe to operate locks that lower or raise a boat to get through a dam. Mark Glaab is the facility manager for American Commercial Barge Line. His boats push barges up and down the river.

"I get three or four calls a day," he says. "People wanting to be able to unload their barges here into trucks or into trains because we can't go onto the river until the water goes down. I got plants in Chicago running out of product." Cairo does not have a port, so it's not possible to offload goods from the barges. It's often a long waiting game.

Months of Mississippi River flooding have led to an endless flow of fresh water into the salty Gulf of Mexico — pummeling oysters with too much fresh water and causing massive oyster die-offs across the Gulf Coast. Louisiana officials say the oyster harvest in public areas is down 80%. Mississippi says 70% of its oysters have died. Those numbers are expected to increase. It's not just oyster harvesters who are affected. It's the whole industry: restaurants, distributors and processors. Both Louisiana and Mississippi have declared fisheries disasters.

Forecasts for the Mississippi River show the river's longest flood on record is finally coming to an end, and the Army Corps of Engineers forecast shows the Great Lakes should begin their seasonal decline in the next several weeks. But fall is a very active storm season, and with strong storms churning up lake and river waters, it's likely that floods, coastal erosion and many problems that come with high waters will persist.