Accessibility links
Trump Officials Send Mixed Signals On Citizenship And Apportionment After Census Recent remarks raise concerns the Trump administration won't follow more than 200 years of precedent in dividing up seats in Congress based on population counts that include unauthorized immigrants. 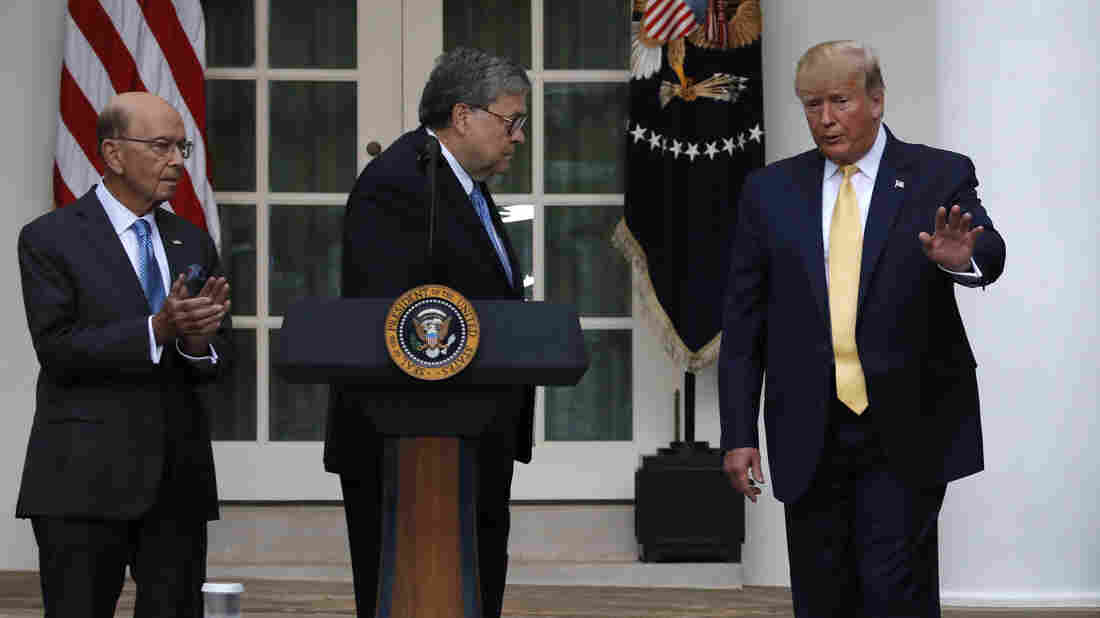 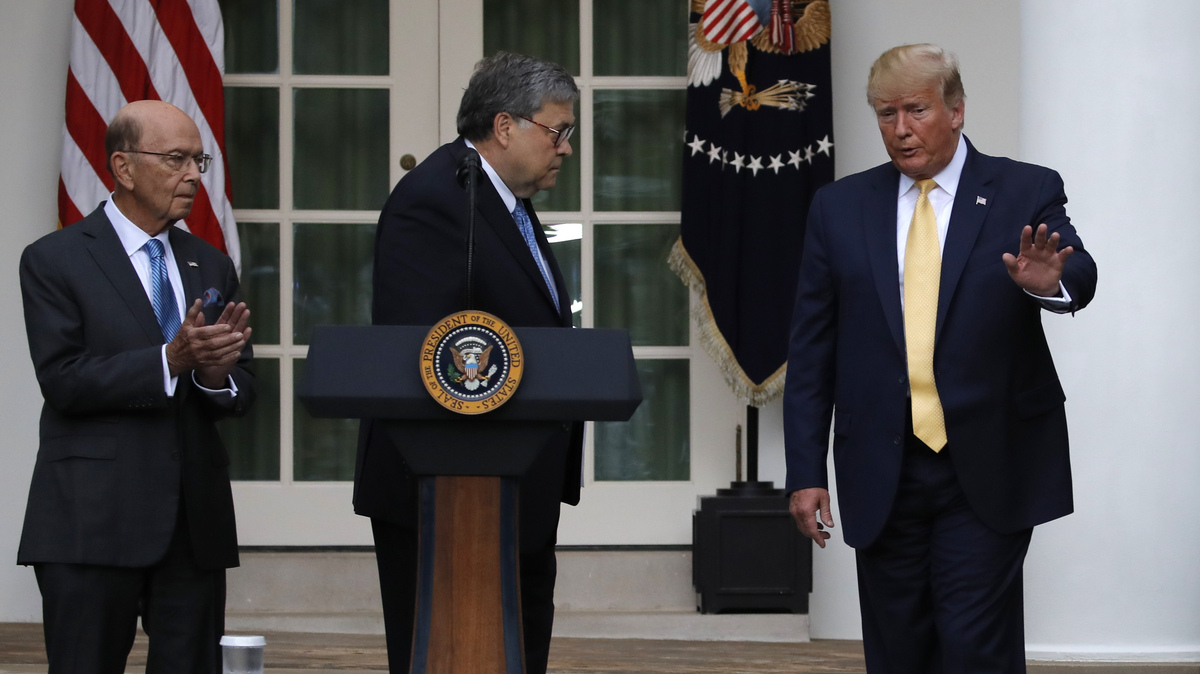 President Trump is joined by Commerce Secretary Wilbur Ross (left) and Attorney General William Barr during a July event at the White House announcing that his administration is relying on federal agency records to produce citizenship data.

Recent statements by Census Bureau and Justice Department officials have raised the question of whether the Trump administration plans to diverge from more than two centuries of precedent in how the country's congressional seats and Electoral College votes are divvied up.

Since the first U.S. census in 1790, the Constitution has called for a head count every 10 years of "persons" living in the U.S. to determine the number of congressional seats each state gets. Federal law requires the commerce secretary, who oversees the Census Bureau, to deliver those numbers by the end of a census year to the president, who must report them to Congress within a week after the start of its new session.

The counts have always included both citizens and noncitizens — regardless of immigration status — although the history of who was counted and how is complicated. Following the Civil War, the 14th Amendment was ratified to require the counting of the "whole number of persons," ensuring the rights of formerly enslaved people who were once considered "three fifths" of a person. The "Indians not taxed" clause no longer excluded some American Indians by the 1940 census, when the Census Bureau began attempting to include all Native Americans in the counts used for reapportioning seats in Congress.

In recent weeks, however, the Census Bureau's director, Steven Dillingham, has not been able to provide a clear answer as to whether citizenship will be factored into apportionment after the 2020 census.

During a July 24 House oversight subcommittee hearing, U.S. Census Bureau Director Steven Dillingham was unable to directly answer Rep. Ayanna Pressley's question about whether citizenship data will be used in the next apportionment count.

"Can you confirm for us today that the citizenship data collected pursuant to the executive order will not be used in the bureau's apportionment counts?" Pressley asked.

After a notable three-second pause, Dillingham stumbled into an attempt to defer a response before Pressley asked whether the head of the Census Bureau believes that the citizenship data should be used for apportionment.

"I don't have any belief whatsoever. I just need to know the mechanics, congresswoman," replied Dillingham, who later agreed to provide a written response within 10 days.

On Aug. 9 — six days after that deadline — the bureau provided this reply to Pressley's office:

"The issue you asked about is currently in litigation and we do not comment on ongoing litigation, but the Census Bureau will fulfill its constitutional mandate to conduct a complete and accurate 2020 Census and enumerate all persons living in the United States of America."

That litigation is a lawsuit filed against the Trump administration last year by the state of Alabama and Rep. Mo Brooks, a Republican from that state. Alabama State Attorney General Steve Marshall and Brooks argue that the Census Bureau should exclude unauthorized immigrants from numbers used for apportionment because the framers did not intend for immigrants living in the U.S. without authorization to be included among the "persons" described in the Constitution.

The Census Bureau has not directly responded to NPR's question about whether the bureau plans to include citizens, unauthorized immigrants and other noncitizens in the 2020 apportionment count. The bureau's public information office has also not responded to questions about why Dillingham missed the initial deadline for providing a response to Pressley.

"I don't think it's normal for the Census Bureau" to be vague about what goes into its "most important product," says Thompson, who was appointed by President Barack Obama and left the bureau in 2017.

With just over five months until the official start of the 2020 census, Thompson says it's "incredibly important" for the bureau to be transparent about what data will be used to decide how congressional seats and Electoral College votes are redistributed.

I think that the Census Bureau is not being allowed to state the government's position, and that raises the specter that something is going on behind the scenes.

Efforts to exclude unauthorized immigrants from the apportionment count through lawsuits go back to the 1980s. Led by the Federation for American Immigration Reform, an immigration restrictionist group, the cases were ultimately dismissed. Most recently, however, the idea was resurrected by Kris Kobach, the former Kansas secretary of state who discussed the addition of a citizenship question with officials during Trump's 2016 election campaign. In an email to Commerce Secretary Wilbur Ross, who oversees the Census Bureau, Kobach suggested wording for a question that would ask noncitizens about their immigration status, noting the "problem that aliens who do not actually 'reside' in the United States are still counted for congressional reapportionment purposes."

While Justice Department attorneys representing the administration in the case have asked for the Alabama lawsuit to be dismissed, U.S. District Judge R. David Proctor in Birmingham, Ala., has called the DOJ's efforts "rather halfhearted."

Late last year, Proctor allowed groups represented by the Mexican American Legal Defense and Educational Fund, the Lawyers' Committee for Civil Rights Under Law and other legal organizations to intervene in the lawsuit. In an opinion last year, he wrote that allowing the groups to participate in the case "will increase the prospect that the court will be more fully informed of the best arguments that support" the Census Bureau's position.

On Monday, New York State Attorney General Letitia James' office led a coalition of more than two dozen states, counties and cities — as well as the U.S. Conference of Mayors — in asking Proctor to allow them to also defend the bureau in the lawsuit, arguing that they could lose congressional seats and Electoral College votes, as well as federal funding, if unauthorized immigrants living in the U.S. are no longer considered residents for the purposes of the census.

No individual ceases to be a person because they lack documentation.

"No individual ceases to be a person because they lack documentation," James said in a written statement after the court filings were released.

The city of Atlanta and Virginia's Arlington County filed a similar request on Monday. Proctor had previously scheduled a hearing for Sept. 6, to determine the next steps in the case.

In their request to Proctor, attorneys for the coalition cited remarks by U.S. Attorney General William Barr in the White House Rose Garden last month, when Trump announced his administration was backing down from its failed attempt to add a citizenship question that three federal courts have now permanently blocked from appearing on 2020 census forms.

As an alternative, Trump announced he was issuing an executive order, which essentially repackages ongoing Census Bureau efforts ordered by the administration last year to produce citizenship data based on the records of other federal agencies. The order also notes that citizenship data could help the government "generate a more reliable count of the unauthorized alien population in the country."

During the announcement, Barr noted that the data "will be used for countless purposes" and referenced Alabama's lawsuit:

"For example, there is a current dispute over whether illegal aliens can be included for apportionment purposes. Depending on the resolution of that dispute, this data may be relevant to those considerations. We will be studying this issue."

On July 11, Barr said that citizenship data could be "relevant" in Alabama's lawsuit seeking to exclude unauthorized immigrants from the apportionment count. "We will be studying this issue," Barr said.

Still, more than a week later, Justice Department attorneys made a court filing asking for Alabama's lawsuit to be tossed out.

The Justice Department declined to elaborate on Barr's remarks or comment on whether it intends to continue defending the Census Bureau in the Alabama lawsuit, according to an email from DOJ spokesperson Kelly Laco.

The White House has not responded to NPR's request for comment.

The Alabama case, however, has apparently stopped census officials from talking about the bureau's long-standing interpretation of its constitutional mandate. In fact, on a "Frequently Asked Questions" page on its official website, the bureau explains: "The apportionment calculation is based upon the total resident population (citizens and non-citizens) of the 50 states."

Robert Groves — who was appointed by Obama to serve as the Census Bureau's director during the 2010 census — sees the bureau's refusal to comment because of "ongoing litigation" as a "pretty common response" for "all institutions."

But Groves says he doesn't see "any wiggle room" in reinterpreting the constitutional mandate to include only citizens for divvying up congressional seats.

"It's a clear line of statute and constitutional amendments that make the resident population the count that drives the reapportionment process," says Groves, who now serves as the provost of Georgetown University.

A former Census Bureau director appointed by both Republican and Democratic presidents agrees with Groves. Vincent Barabba, who led the bureau for two terms and served under Presidents Richard Nixon, Gerald Ford and Jimmy Carter, said in an email that he feels "confident that it was the intention of the founders of our country to use the complete count to apportion the House of Representatives."

"Unless Congress begins the process of amending the constitution to change the process that has been continually used," Barabba added, "I would continue to use the existing process."

Last month, however, Trump appeared to signal a potential change after the 2020 count when a reporter asked the reason for trying to get a citizenship question on the census.

"No. 1," the president said before boarding the Marine One helicopter from the White House lawn, "you need it for Congress."