Accessibility links
Janet Mock On Transgender And Queer Stories In 'Pose': 'Welcome To Our World' As a writer, director and producer of the TV series about the underground ballroom community in 1980s New York, she says the work sometimes makes her tear up. 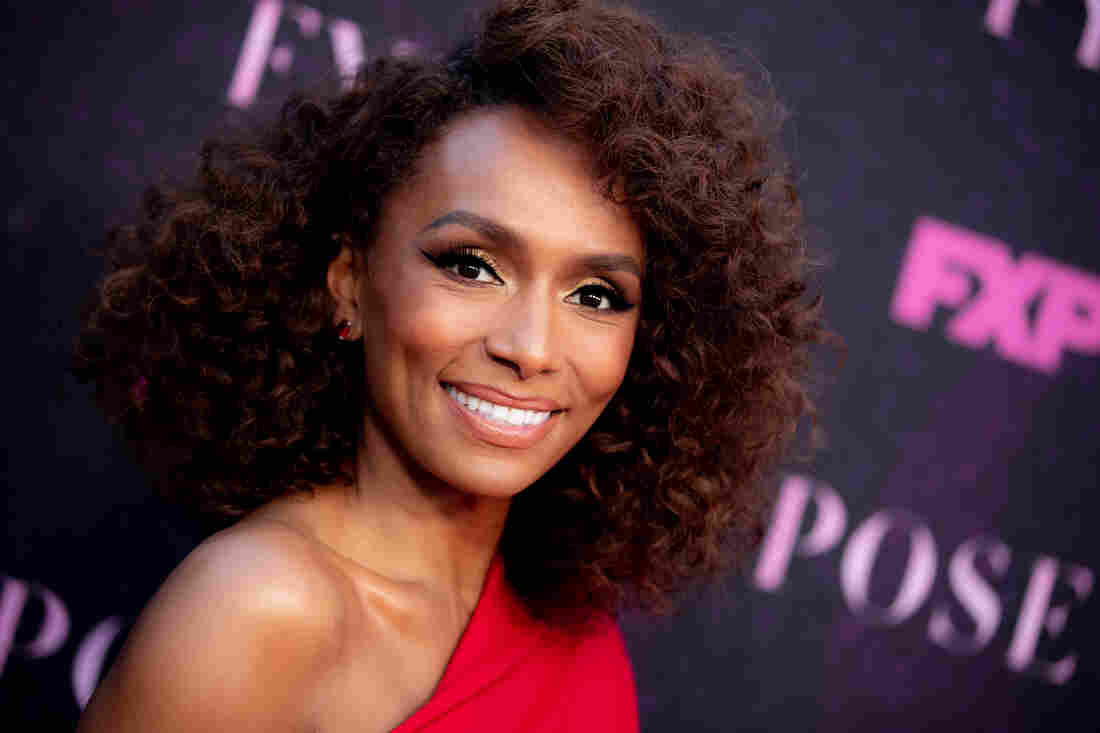 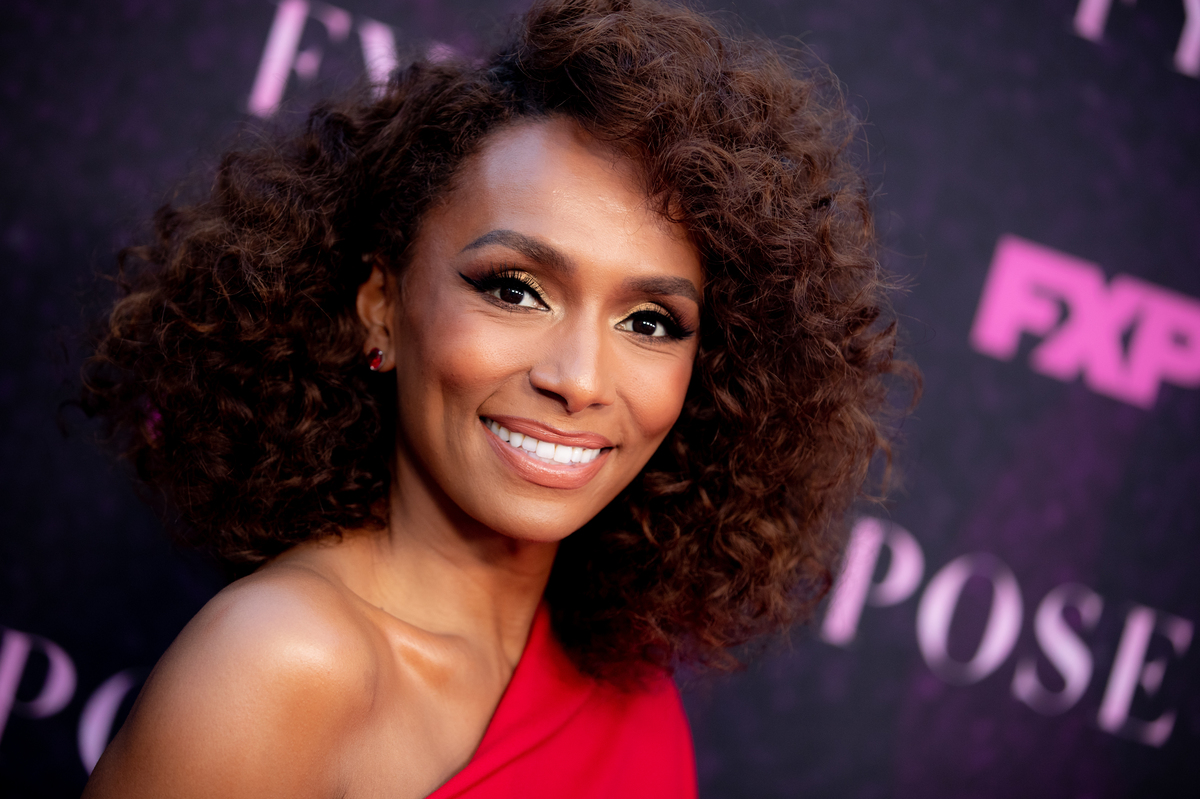 Janet Mock attends a red-carpet event for Pose earlier this month. Mock is a writer, director and producer of the TV show about ball culture in 1980s New York City.

Janet Mock remembers when she saw the documentary Paris is Burning for the first time. She was in 10th grade, living in Hawaii, and had already socially transitioned her gender identity. She was about to embark on her medical transition.

"My friend had a VHS that she got from another friend," Mock says. "It was kind of like this little magic ticket that was passed down to a bunch of us."

Jennie Livingston's 1990 film focuses on the gay and transgender drag performers in the underground ball culture in New York City. "It was one of the first times that I got to see people who looked like me, and who represented me and my community, be the centerpiece of a narrative," Mock says. "I felt so seen for one of the very first times in my life."

That same ball culture she saw in Paris is Burning would come up again in her career, decades later. After launching a career in journalism, writing two memoirs and becoming a trans activist, Mock made history as the first trans woman of color to write and direct an episode of TV when she joined the production of Ryan Murphy's series Pose.

'You Just Serve As Much As You Can': Mj Rodriguez On Ball Culture And 'Pose'

The FX series, now in its second season, tells the story of LGBTQ youth in the 1980s and '90s ball scene — a community mostly populated by black and Latinx people — and the "houses," or chosen families, that they create as a mechanism for survival.

"The fact that I get to go on set and supervise production, write scripts, direct ... it's astounding," Mock says. "I watch the monitors sometimes ... with tears in my eyes, realizing that these were the sort of stories that I was craving as a young person. There's no over-explaining of our experiences. ... It's just: 'Welcome to our world.'"

The ball culture is a space started in uptown Manhattan, in Harlem. It was created by a group of black trans women and drag queens who were tired of being pushed out of white drag spaces, where they kept on being upstaged and not given titles. The titles were favored to white queens, white queens who embodied Western culture's idea of beauty and femininity more than the black and brown queens did. So Crystal LaBeija created the scene, and it has become this kind of community space — one where a lot of orphaned people, homeless folk, trans and queer people gather together in houses. ... They go into a ballroom — which can be a gym, a recreational center, a YMCA, a theater that they rent out — for an evening to compete in categories, such as "realness," such as "runway," such as "vogue," and they get to live out their fantasies with one another and celebrate one another.

On "houses," or chosen families within the ball community

There's often a mother and a father who is the head of the household, who takes in kids, takes in young people, takes in queer folk who've been rejected by their own families and takes care of them. [They offer] them food, shelter, clothing, life experiences, advice ... It's the idea of chosen family, which LGBTQ folk know all too well, for their own survival. Chosen family is one [idea] that our show definitely centers and celebrates. It's all about the mothers who take in these children after themselves being pushed out of their own homes. They create new networks of survival, of creativity, of love and sustenance, that enables young folk to blossom in the absence of not having their birth families oftentimes supporting and truly affirming and loving them.

Part of my public work is talking about my life experiences and what I've gone through. I've been very transparent about my struggles with my body, and with a society that is constantly trying to contain me and label me and define me. I've spent my entire youth and life fighting against that. And so one of the great gifts of writing for television and writing for these characters is [they can say] all the things that I may not have been bold enough to say — say in an interview or at a dinner party when someone finds out that I'm trans, or [when] I bring it up in my work, and they're astounded and they start asking all of these strange, invasive questions ... The things that I've had to do medically to my body don't define me. They're the least interesting things about me. The fact that they're the most sensational things for you, as a non-trans person, as a cis person, I think says a lot about how we've framed trans people as these objects of dissection, of modern-day freak shows in a way.

My experiences in the sex trades and in sex work [are] so deeply complicated. I was introduced to it first just as a hangout spot. Merchant Street is a street in Honolulu, Hawaii in downtown Honolulu ... when I was 15 years old, I went for the first time. I went dressed up with my friends; we hung out with older girls, and when I say older girls I was 15 and some of them were 18 to 25, but they were light-years ahead of us in terms of their identities and their own transitions, of their confidence in their bodies, of proclaiming themselves to themselves and to one another. It was deeply a space of sisterhood and socializing for me. ... I was so naive. I went very much with my student government and National Honor Society hat on, thinking, "I could never do what these women are doing. I could never sell my body. I could never have sex with men in the backseats that their cars."

And I remember, maybe a year later, a car pulled over for me ... and one of my friends said, "He wants to take you on a date," and I was like, "What does he want me to do?" and she was like, "He will pay you $60 if [you] did a sexual act with him." And all I thought was $60, wow. What I could do with $60. I could pay for two months of my Premarin [hormone] pills. I could buy myself clothes that my mom can't afford. I could buy spam musubis in the morning from 7-Eleven. For a poor kid, a poor trans kid, a poor trans kid of color, that $60 was a great way of taking care of myself, and so I thought about it in [terms of] survival. I thought, "Oh, I have an asset in this world. I have my identity and I have my body, and I can use my body as an asset to take care of myself in this world." I no longer felt as poor. ... I no longer felt as if I had no resources, and so for me, at that time period as that 16-year-old, it felt incredibly powerful. I felt empowered.

I wish that I could say it scared me straight. It did not. Survival was all too loud of a siren for me. At that point I had just been a few thousand dollars away from saving for my sex reassignment. What I did do is that I no longer took risks. I no longer went in cars with new clients. I always made sure that I had references from other girls, who had ... worked with those clients before. And I doubled down on working with regulars only. And so in that way, I made sure that I took care of myself and took greater precautions.

On expressing her true self for the first time

I was in the 7th grade. I was dressed up in a black-and-white checkered halter top and bell bottoms, platform heels that I borrowed from my best friend Wendy, who was also a trans girl that I grew up with, and her short Toni-Braxton-bobbed wig. I felt so pretty. ... We performed as the Spice Girls. ... I just remember us being applauded, and being celebrated. And for me, those are things that I wish I had more of growing up.

On how she handles her many projects (Pose, a Netflix deal, and a new Ryan Murphy series called Hollywood) and how she's always had great energy and focus

I think for me, my first project or production of sorts was myself. I had to work hard and sacrifice a lot to be able to be who I am. And that was ... probably the biggest obstacle that I had to overcome. I overcame that at 16 years old, and by 18 I had achieved my goal of medical transition, which to me at that time was the first thing I knew I needed in order to move on — to move on from my issues with my body, to move on with issues with my gender, to move on with issues with my community and my family and a whole society and culture that was telling me that I did not belong and who I was was wrong.

And so for me, the first story I had to tell after being properly credentialed, which was going to NYU for a master's degree, working at some of the top publishing houses there [were], and then to get a book deal to tell my story. I was the first trans woman of color to have a mainstream book deal to tell the perspective of a transition from a young [person's] point of view. And once I conquer that, my story was out in the world. ... I was able to sit next to Oprah [on] SuperSoul Sunday and have her ask me questions about my life, which I never thought that I would be able to have. I was able to step on stage at the Women's March on Washington to resist an incoming administration that was looking to silence us. I was able to have my book reach the hands of my dear friend and mentor now, Ryan Murphy, who has enabled me to tell stories on a bigger platform. And now with this Netflix deal, I'm just energized. I'm energized to continue to tell stories that matter to me.

Lauren Krenzel and Seth Kelley produced and edited this interview for broadcast. Molly Seavy-Nesper and Patrick Jarenwattananon adapted it for the Web.