Accessibility links
China State Media Present Their Own Version Of Hong Kong Protests As pro-democracy protests in Hong Kong continue to dominate the world's news, China is aggressively presenting a very different picture of events. The audience is its people, and home and abroad. 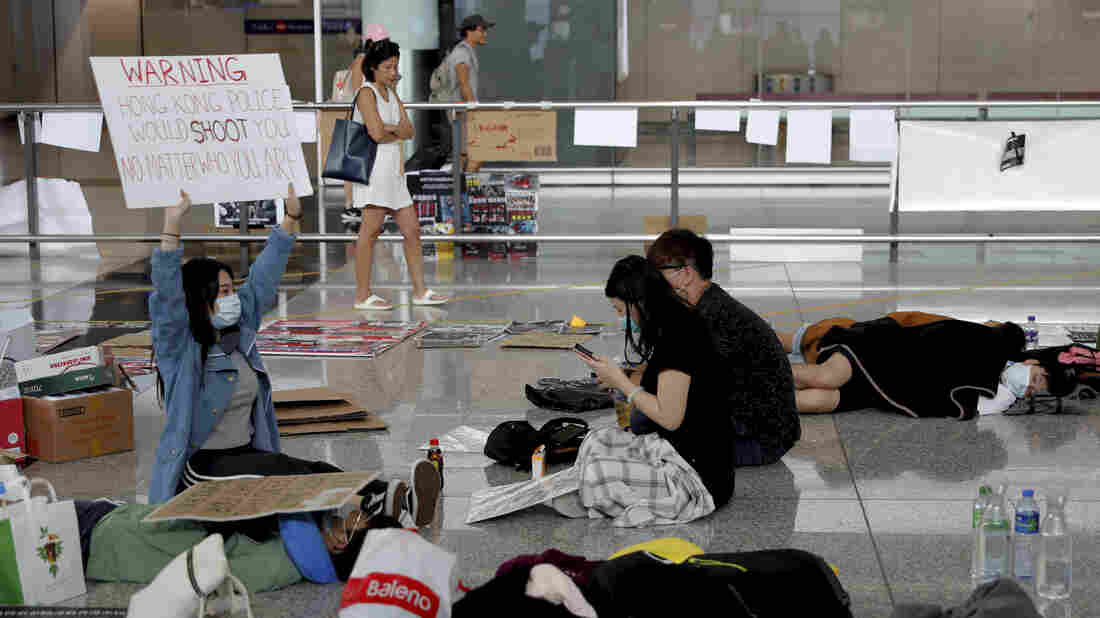 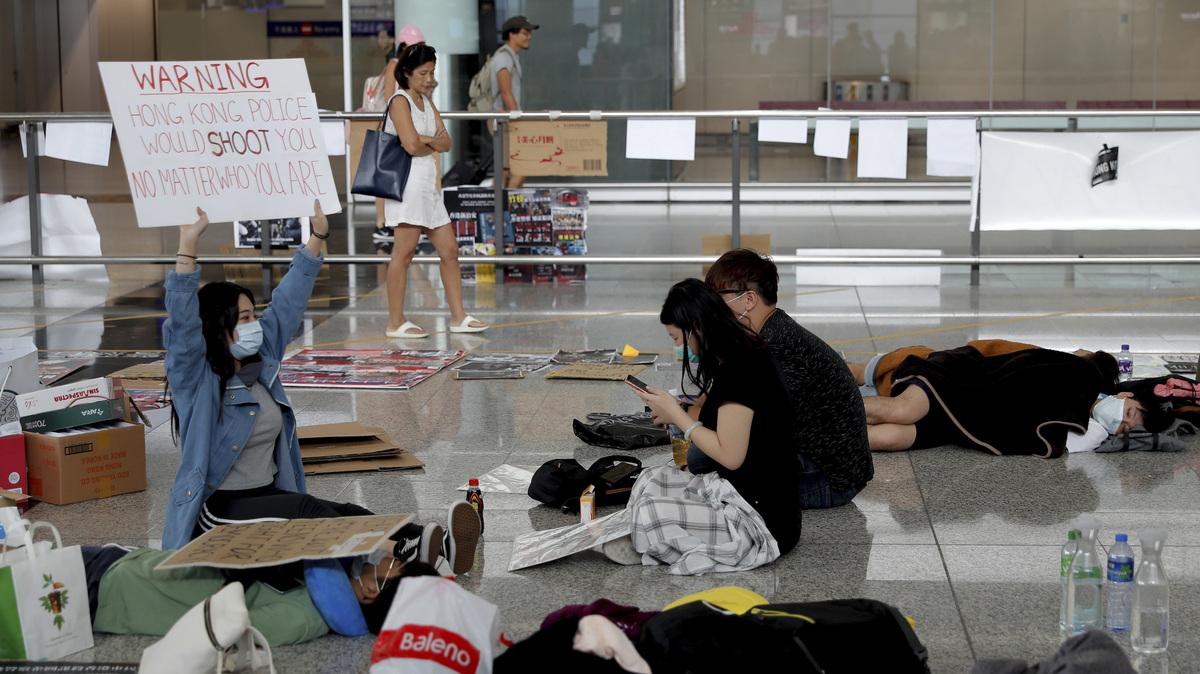 A protester shows a placard to travelers at Hong Kong International Airport on Wednesday. Flight operations resumed at the airport Wednesday morning after two days of disruptions.

As anti-Beijing protests in Hong Kong enter their third month, China's leaders face a new challenge: managing perceptions of the protests at home.

China is anxious the protests might inspire similar dissent on the mainland, where huge swathes of territory — including the regions of Xinjiang and Tibet — have also seen numerous instances of opposition to Beijing's governance.

To inoculate itself, Beijing has turned to a raft of disinformation tactics to stir up nationalist support at home, creating a very different narrative of what is happening in Hong Kong by levying its control over the flow of information.

"The [protest] movement is so complicated, unpredictable and unprecedented, with a very diverse group of participants," says Fang Kecheng, a communications professor at Chinese University of Hong Kong (CUHK).

"But what we see within the Great Firewall of China is actually simplified and distorted," he says. "That is because nationalistic content is politically safe and highly popular among the Chinese public and internet users."

Official state media pin the blame for protests on the "black hand" of foreign interference, namely from the United States, and what they have called criminal Hong Kong thugs. A popular conspiracy theory posits the CIA incited and funded the Hong Kong protesters, who are demanding an end to an extradition bill with China and the ability to elect their own leader.

Other widely shared videos on Weibo, a popular Chinese blogging platform, claim to show a female protester who lost an eye last weekend from a rubber bullet accepting payment from other protesters, insinuating the incident was staged. Except the woman accepting cash in the video is not the protester who lost her eye.

But Beijing's biggest messaging victory so far was provided by Hong Kong protesters themselves on Tuesday night, when they descended on two men suspected of being mainland Chinese agents. Beijing made sure to widely disseminate videotape of the incident.

By the next morning, a third of top trending topics on the popular blogging platform Weibo were expressions of support for one of the men, a reporter for the hard-line Chinese newspaper Global Times. Viral slogans like "What a Shame Hong Kong" and "I support Hong Kong police, beat me all you want" have been shared millions of time on Instagram and Weibo, with some Internet users threatening to travel to Hong Kong themselves to avenge the Global Times employee.

"If you opened the Shenzhen port to Hong Kong now and waived the needed permit, I dare say that [these protesters] would have been beaten to a pulp," wrote one user.

Some Hong Kong protesters, distraught by the violent turn of events last night, created digital apologies and even condolences on mainstream Chinese social media sites, including Weibo and WeChat, a ubiquitous chat app. But the posters were almost immediately censored.

"Sadly, it seems that only patriotic content is now allowed," says CUHK's Fang.

Beijing's message is even succeeding with Chinese living abroad.

"I think the situation in Hong Kong has evolved into a color revolution, which is supported by the Western countries," Bao Haining, a rising junior at George Washington University in Washington, D.C., and originally from the northern city of Changchun.

"I define the protesters in Hong Kong not as a demonstration any more. I can define them as a terrorist organization," he says, "because they attack civilians and occupy public buildings like airports."

Controlling the message is critical if Beijing wants to escalate its intervention but stop short of a military crackdown, Minxin Pei, a comparative politics professor at Claremont McKenna College, told NPR.

Pei argues the costs of a military intervention would be too high for Beijing to justify. Bloody street clashes would result in high casualties and global condemnation, and enforcement of law and order after an invasion would require a costly military occupation.

"It's not about whether [Chinese] troops can maintain order. It's really about the day after the war, because the Hong Kong government will not be able to function," says Pei.

Instead, Pei believes Beijing, if necessary, will use nationalism to mobilize tens of thousands of disaffected young men as patriotic volunteers to storm Hong Kong and squash protests. Last week, China's top office on Hong Kong affairs unleashed its strongest rhetoric yet against the protests and called on pro-Beijing supporters to "firmly protect the homeland" in Hong Kong.

A seemingly grassroots movement would give Beijing plausible deniability behind any kind of forceful intervention, says Pei: "If you have sort of civilian types getting involved then it's really hard to conclude that one country two system is bad because we're talking about ordinary Chinese people — patriots — getting themselves in while protecting Hong Kong."