Accessibility links
El Paso Shooting: Some Voters In Houston Suburbs Now Urging Action On Gun Bills Texas is home to some of the deadliest shootings in modern U.S. history. It's making some in a once solidly Republican community outside Houston revisit their positions on gun control. 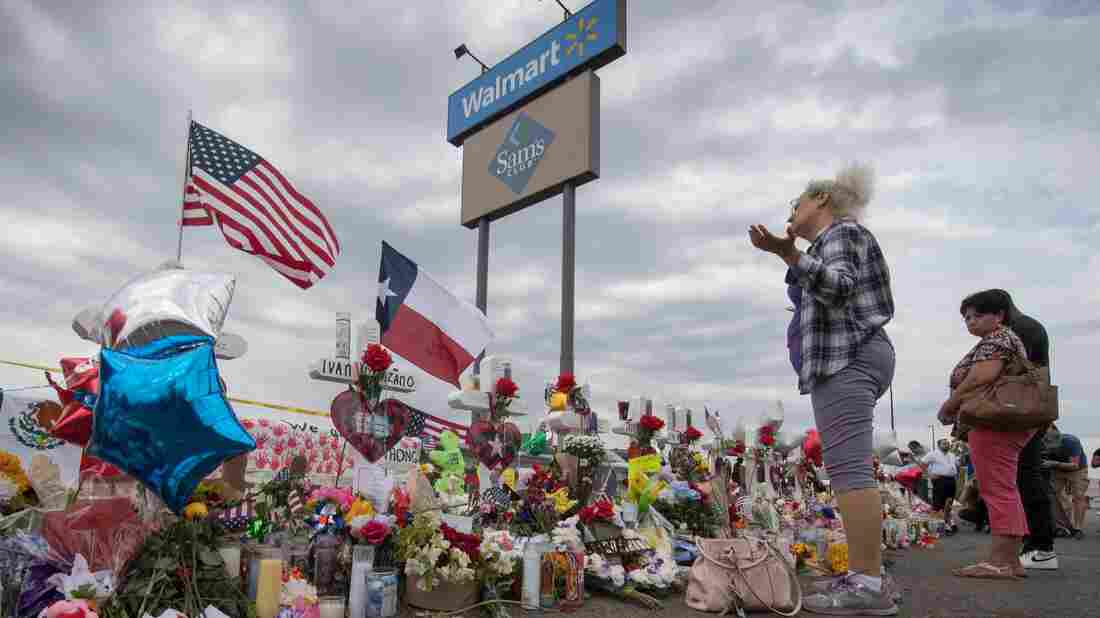 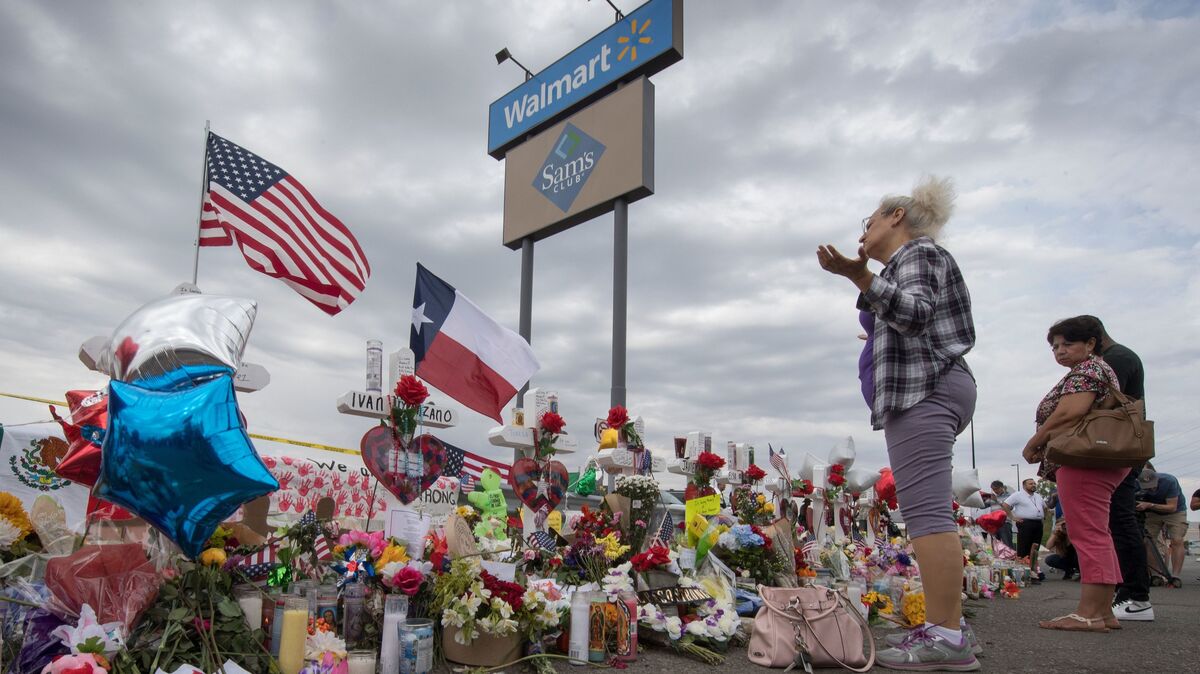 A woman prays at a makeshift memorial for shooting victims at the Cielo Vista Mall Walmart, in El Paso, Texas.

After back-to-back mass shootings, residents in one Houston suburb are demanding members of Congress finally take action to stop a deadly trend in America.

Fort Bend County is home to Sugar Land and other cities where demographics and political stripes are dramatically changing. And voters in the 22nd congressional district who have elected Republicans opposed to major gun restrictions in recent years may be considering giving a Democrat the job in 2020.

It's pressure like this from these suburban communities in other parts of the country that could shift the debate on gun measures in Congress this fall.

"I don't think the NRA is doing its job that it was originally set out to do. They've become far too strident and Second Amendment — more guns, screw everybody else," said Fort Bend County resident Tom, a longtime NRA member who spoke to NPR but declined to give his last name out of fear for his family's safety. "I don't think they are doing a good job representing us. I personally — this is really gonna get me in trouble — I personally don't have any need for the AR- and AK-style weapons."

Tom, who made the comments from Fort Bend County gun range, thinks if high-capacity magazines behind mass shootings can't be banned, then it's time to ban assault-style weapons.

Earlier this month, 22 were killed and more than 20 were injured at a Walmart in the border community of El Paso, Texas, by a suspected gunman from northeast Texas. The next day, nine were killed in a mass shooting that lasted less than one minute at a popular Dayton, Ohio, nightclub district.

The incidents have led some Texas suburban residents who live in what was once a solidly GOP suburb to revisit their positions on the gun control.

Fort Bend County is now one of the most diverse counties in the country. But it wasn't always that way.

When Kelly Fox first moved to Sugar Land in 1995, she was a pretty lonely Democrat in the area, which was much less ethnically diverse.

By then, the last of the Texas Democratic giants, the late Gov. Ann Richards, was defeated by a rising political star from the Bush family — George W. Bush. And Republican Rep. Tom Delay, a powerful House GOP leader, represented Fox's district.

"My husband I always joke that we're like these little blue dots in a sea of red because Fort Bend County, well Texas, you know we were blue ... and things changed," Fox said during a recent visit to a nearby farmers' market. "Fort Bend County in particular was very, very red."

The county was largely white in the 1990s, but by 2010 it was considered the most ethnically diverse county in the state, according to Rice University's Kinder Institute for Urban Research. By 2016, Fort Bend had an ethnic breakdown of 35 percent Anglo, 24 percent Latino, 20 percent African-American and 21 percent Asian, according to an annual study by the institute.

Fort Bend County is undergoing a new political metamorphosis thanks to its newfound ethnic diversity, and with that comes increasing interest in the Democratic party. And some say it's a symptom of a greater tide turning in Texas.

Last month, Republican Rep. Pete Olson, the four-term congressman representing Fort Bend County and surrounding areas, said he was retiring. That news made the nonpartisan Cook Political Report shift the 22nd Congressional District into the "toss up" column in its ratings.

Huge news for Dems: Rep. Pete Olson (R) to retire, moving #TX22 from Lean R to Toss Up at @CookPolitical. This is one of the fastest-diversifying districts in the country.

Now that more Texas suburbs may be turning purple, or blue in some cases, some voters in suburban areas like Sugar Land think Democrats could have the answers in the wake of mass shootings like El Paso where 22 were left dead.

Those voters say Democrats are more likely to push forward with plans to expand background checks for firearm purchases and add restrictions on assault-style weapons.

"They've really got to look at things that they can do as preventative measures without actually taking people's rights away. I don't want to take all guns away because that's not what most of us are pushing for when we talk about it," Fox said. "It's more like this is crazy. There are things that we could do to make it a little more difficult for people of these mindsets — that are thinking these ways — to get their hands on these weapons that can kill people in a matter of seconds."

At another Fort Bend County gun range, Air Force veteran Mike Smith says he's worried he could lose his gun. Smith was taking his 13-year-old daughter Mikenzie shooting for the first time after a break-in at his Richmond, Texas neighborhood.

Smith, who works two blue-collar jobs, is for some gun restrictions. For example, he thinks the age limit should be raised for owners of assault-style weapons. And some should undergo a psychological profile.

"Do they need to raise the age limit on it? Yes. It needs to be raised to about 23, 24 and then if you're purchasing a weapon for your child, your child needs to go through the same thing that the parent goes through," Smith said. "Basically let's give them a psychological exam. Not saying it's going to be 100 percent. But let's give it time to see if they're even capable of owning a weapon."

After El Paso, Eileen Huang of Sugar Land worried her community could be targeted next.

She attended a recent community meeting on gun violence for a nearby Democratic congressional district searching for answers.

At the forum, Huang, who is president of the Sino Professional Association, which represents Asian American business workers, asked Houston Police Department leaders for help. Huang said she wants members of her community prepare to learn what to do next if they come face to face with a mass shooter.

The suspected shooter in El Paso is accused of targeting the border community because for its large Latino population.

His Only Relative Died In El Paso. Now, Her Funeral May Draw Hundreds Of Strangers

"If there is any training," Huang told two Houston Police Department officials in attendance, "maybe you can host it for our community."

Houston Police Department Assistant Chief Henry Gaw told those at the forum that those are the right questions to ask.

"We need everyone's eyes and ears involved," Gaw said. "I hate to say this, but it's not a matter of 'if' it's going to happen, it's just a matter of 'when' and we just have to be very prepared to mitigate any casualties that might happen."

"We've got to do better by each other"

Rhonda Scott just moved from Ohio, the state where another recent mass shooting left nine dead, to the Stafford, Texas, area to be with her son.

Stafford is also in the 22nd congressional district.

Scott is not a fan of President Trump or what she described as his racially charged rhetoric. She wants to see lawmakers take real action on mass shooters, and stop the language that may be driving them to kill others.

"It's sad that the way we're going right now, you have to look over my shoulder," Scott said. "You want to try and enjoy an events outdoor event, and it shouldn't have to be this way."

Visiting a the farmers' market next to a bustling First Colony Mall, Fox says she's continuing to educate herself on the politics of her district and the issues that matter to her most, like gun control.

Fox is also not a fan of Trump, and worries that his rhetoric has fueled a divisiveness and a rise in the language of hate.

For example, she's proud that Fort Bend County Independent School District schools are designated "No Place For Hate" by the international Anti-Defamation League.

"I feel like government can work in a positive way in people's lives ... Maybe that's idealistic and naive, but I feel like that is the purpose of government," Fox said. "So everything is happening now just kind of strengthens that feeling. It just makes me want to dig my heels in and say, 'You know, we've got to do better by each other. And for our country as a whole.'"