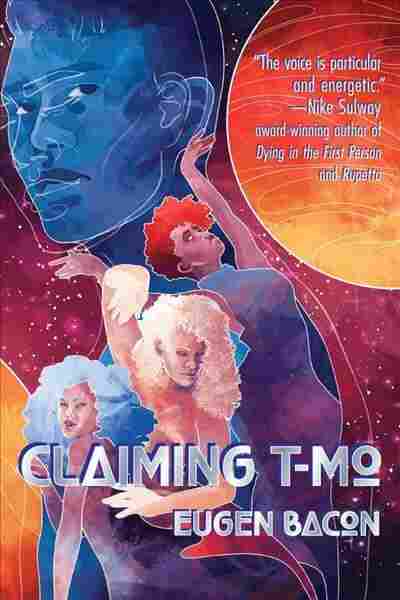 Don't enter Claiming T-Mo with any immediate need to be comfortable or oriented. This debut novel by African Australian author Eugen Bacon is an instantly confounding and mysterious tour de force of imagination.

On the surface, it's a richly textured, multidimensional tale that blends science fiction and an intricate mythology of its own making. Dig deeper, and it's a puzzle that requires considerable assembly, piece by piece, as Bacon's vision of outer-space sociopolitics, Afrofuturist metaphysics, and familial bonds comes into sharper focus. It's an audacious book, one that zooms from the broadest of cosmic conceits into the most intimate of emotional epiphanies. Bacon is not remotely interested in following any threadbare formulas of science fiction or fantasy — much to Claiming T-Mo's benefit.

The saga revolves, at first, around Salem Drew, a preacher's daughter who works in a grocery store, living a life that's achingly mundane. Bacon wastes no time in upending Drew's everyday existence, thanks to two beings who appear before her, separately but with equal impact: a woman with telescopic eyes (you have to experience Bacon's exquisite prose to fully fathom the poetry of her description) and T-Mo, a young man who cuts a dashing, romantic figure despite his deformity — a strangely alluring face full of creases, cracks, and patterns, which Bacon describes as "dinosaur skin." As if in a lucid dream, Salem's life becomes unmoored, and her perception of reality distorts and broadens to encompass T-Mo's truth: He's an alien from a planet called Grovea, and he's also the son of a clergyman, a priest named Novic who defied his world's matriarchy by daring to name his male child.

If Claiming T-Mo stuck with that premise alone, it would make for a wild ride. But Bacon is just warming up. Two other main characters — T-Mo's mother, Silhouette, and his daughter, Myra — weave their narratives into Salem's increasingly fantastic fable. Myra, half-Grovean on her father's side, cultivates a romance of her own with the earthling Vida; Silhouette is torn between T-Mo and his dark alter ego, whom she's named Odysseus. The tension between T-Mo and Odysseus takes on the tint of intergalactic Greek tragedy. The book's strands of Afrofuturism leap to life; Claiming T-Mo is a story of identity, of legacy, of escaping the past and forging a future, all told in a voice that evokes the African diaspora across continents. T-Mo is a creature of language as much as flesh, whose "eyes are full of poems." When he first presents himself to Salem, his presence is both physical and ethereal: "He might have touched it, her hair, or perhaps only his words touched it."

Claiming T-Mo is not light reading, yet for all its density of ideas, it boasts a winning agility and incandescence. Bacon is wise to craft a series of swift, short, often self-contained chapters, as punchy as they are lovely. She uses disorientation as a lens for Salem's surreal, wondrous journey; she doesn't give reader anything predigested, but instead forces us to feel the character's every rush of otherworldly revelation. What ties it all together is love — a web of relationships between relatives and lovers that Bacon conveys in passages of breathtaking beauty, the kind of romance that "made the sky resemble a crystal ceiling, [that] turned the ground at her feet to a fairytale."

'Claiming T-Mo' is not light reading, yet for all its density of ideas, it boasts a winning agility and incandescence.

Bacon's whole book feels itself like a fairytale, albeit one where mystical planets and traveling between stars take the place of castles and sorcery. That said, there is a peculiar witchcraft at work in Claiming T-Mo. It resembles the writing of N.K. Jemisin, particularly in the way it nests the human in the fantastic, and it incorporates the kind of galaxy-spanning scope of generations once used by Octavia E. Butler.

Simultaneously lean and lush, it's a book that's more inquisitive about the limitless thematic and tonal possibilities of science fiction than the genre of science fiction as such. "There is a magical quality about a man who steps through locked doors, unbroken walls," Bacon writes of T-Mo. Likewise, there is a magical quality about a novelist who does the same — and Claiming T-Mo is vivid, pulsing proof.