Accessibility links
In A Pro-Beijing Neighborhood Of Hong Kong, Protesters Are Unwelcome Many residents of a politically conservative neighborhood were born in China's Fujian province and came to Hong Kong for greater opportunities. They accuse protesters of hurting the local economy. 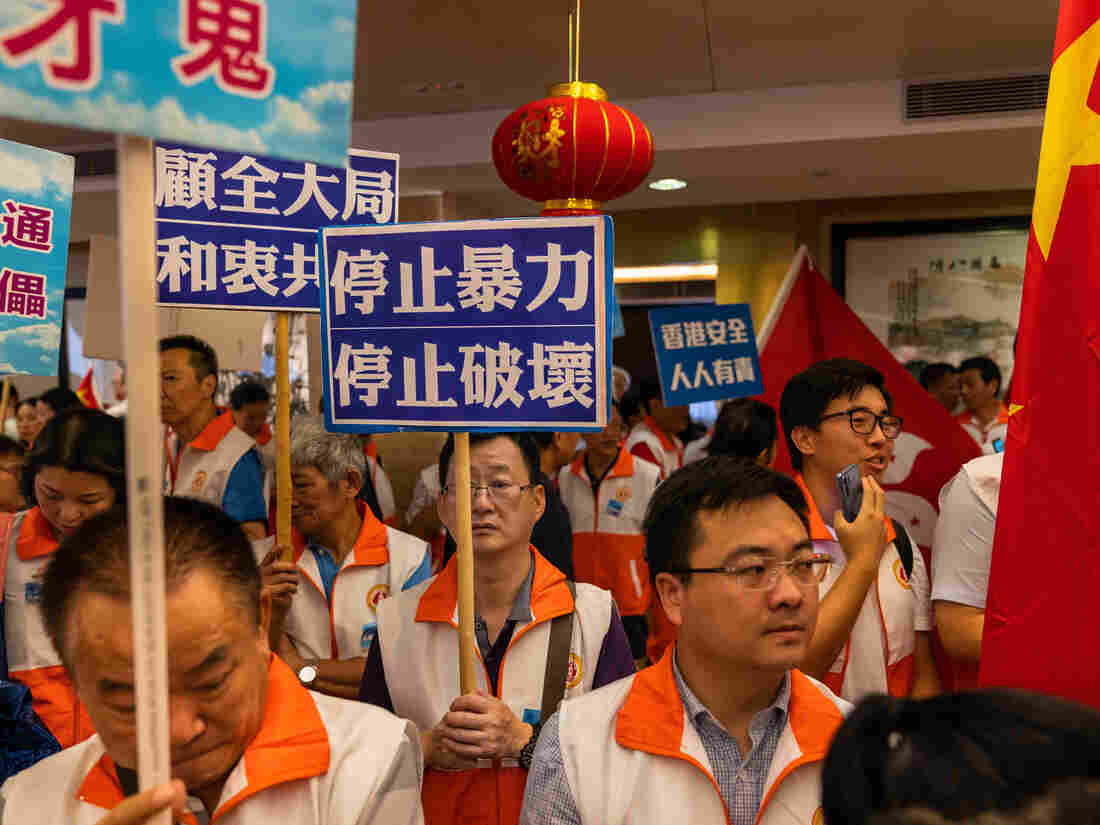 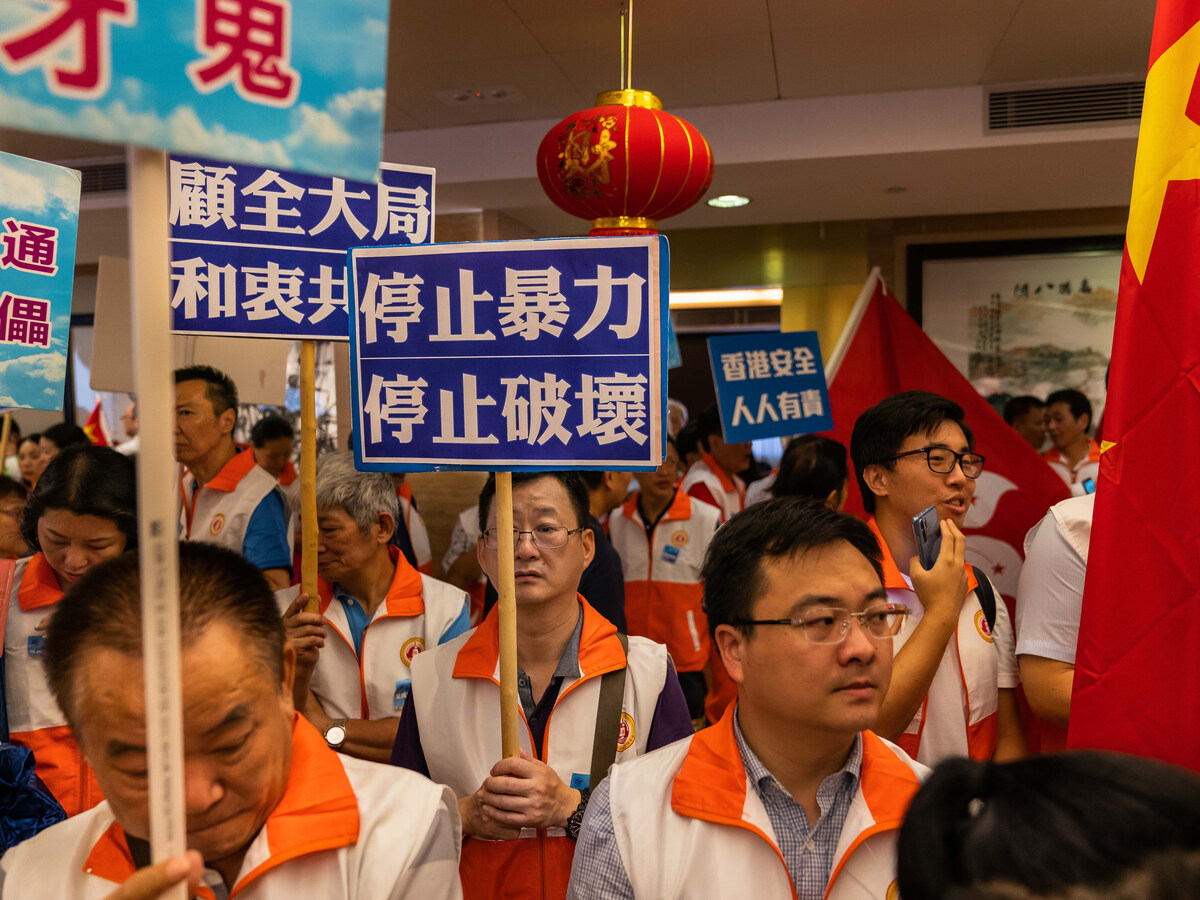 Pro-Beijing demonstrators gather at the Hong Kong Federation of Fujian Associations to show support for the Hong Kong police on Aug. 10.

A banner over the road bore the message "Please do not interfere with our liberties, please go back," making it clear that the protesters were not welcome in this neighborhood.

A tall, wiry man named Xiao Yongli says North Point residents are so furious at the protesters that they can't sleep.

"If those people dare to come here tonight, something big could happen," he warns. "Everyone here is like a soldier. Men and women, young and old, we're all prepared."

The protesters want the permanent withdrawal of a bill that would allow people to be extradited from Hong Kong to stand trial in mainland China. They also are demanding accountability for police abuses, the resignation of Hong Kong Chief Executive Carrie Lam and a democratically elected replacement. 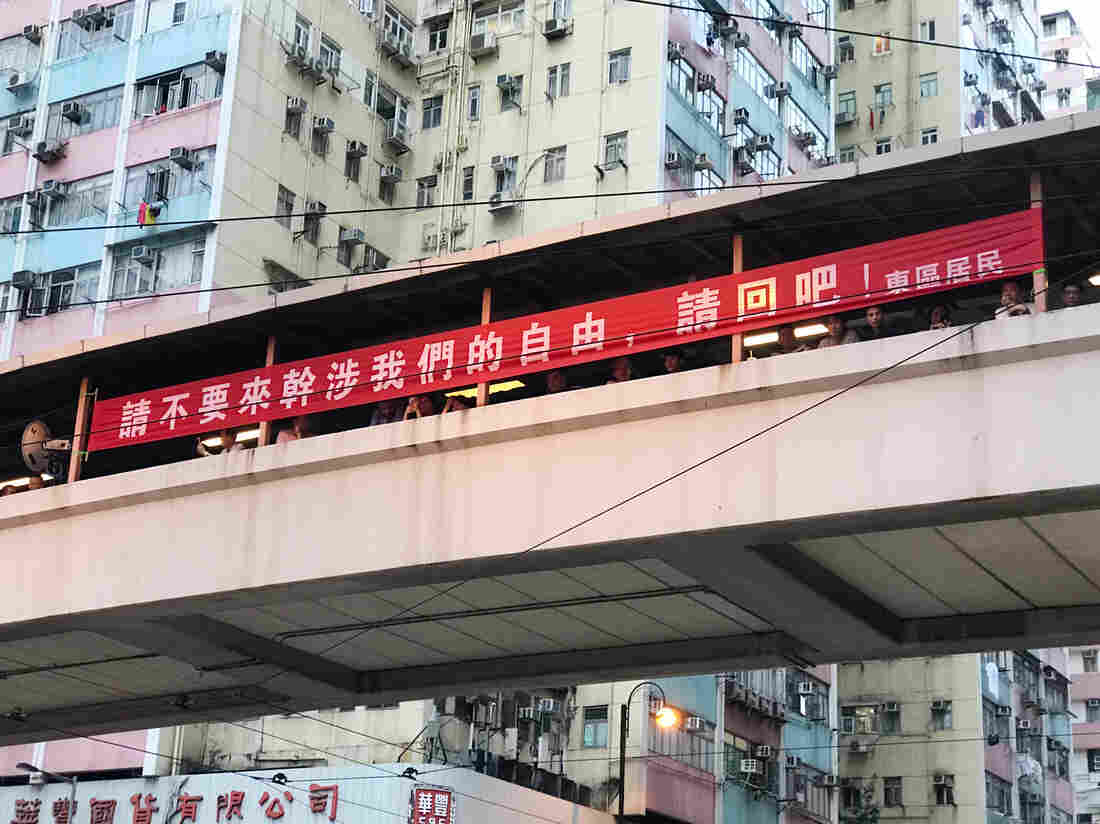 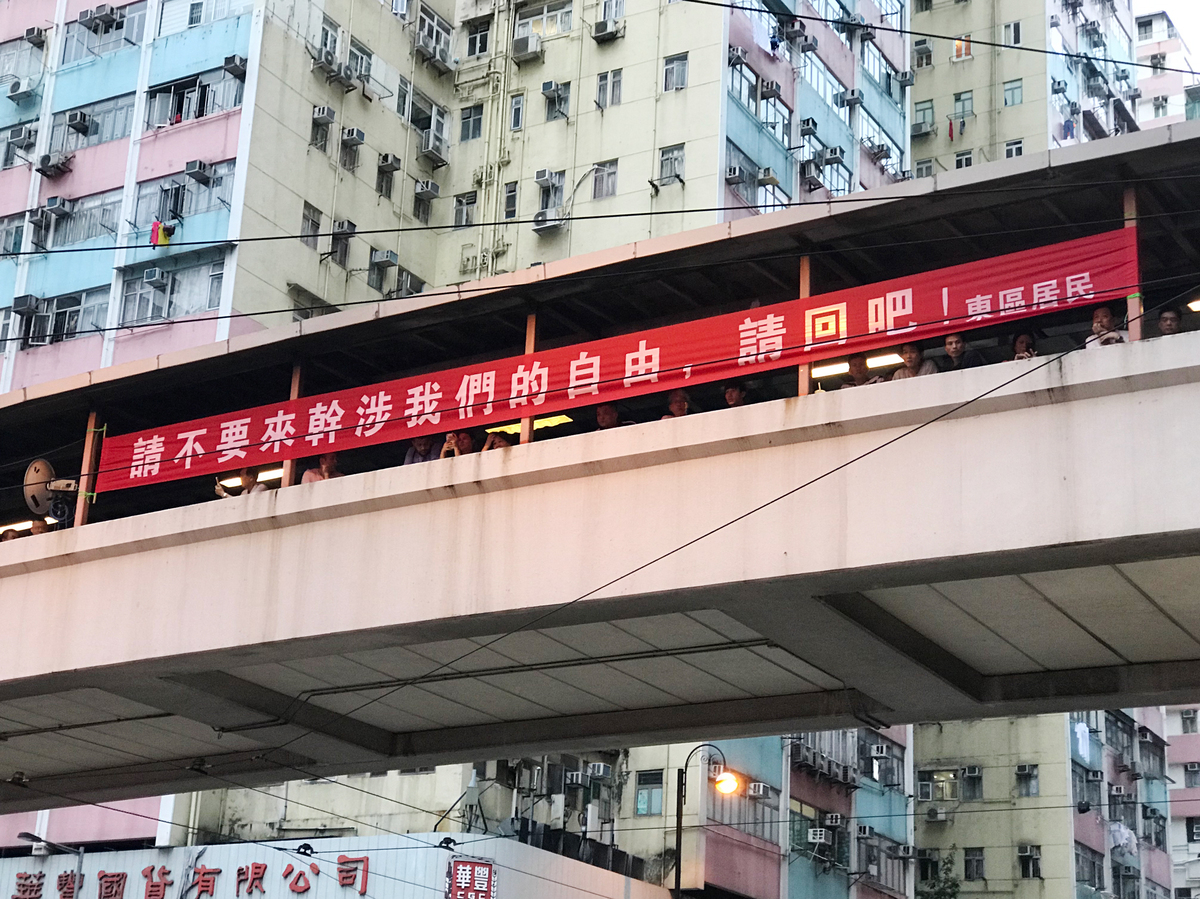 A banner hanging above King's Road in Hong Kong's North Point district tells protesters, "Please do not interfere with our liberties, please go back."

North Point is one of several conservative, pro-Beijing working-class neighborhoods in Hong Kong. Some are immigrant enclaves with close ties to mainland China. Others, particularly in the New Territories near the border with the mainland, are areas that, until recently, were rural farming communities.

These neighborhoods have elected pro-Beijing lawmakers, who constitute a majority in Hong Kong's Legislative Council. They outnumber the city's "pan-democrats," who are fighting what they see as the erosion of civil liberties in Hong Kong and Beijing's creeping influence over the territory.

Beijing has been slow to mobilize its supporters in Hong Kong. It is used to assembling pro-Beijing business elites, dictating the official Communist Party line to them and expecting them to toe it.

Because of the failure to mobilize broadly at the grassroots level, demonstrations by pro-Beijing groups in Hong Kong have been microscopic compared with the nearly 2 million demonstrators who took to the streets in June. This week, barely 300 people attended a rally to show their support for Hong Kong police in maintaining order. In North Point, even fewer Fujianese immigrants attended a similar demonstration.

Xiao says that like most immigrants, he just came to this city to make a living. The protesters have made life harder, he claims, by driving away tourists and investors and dragging down the local economy.

"If you take away my livelihood, then don't expect me to be polite with you," he declares. 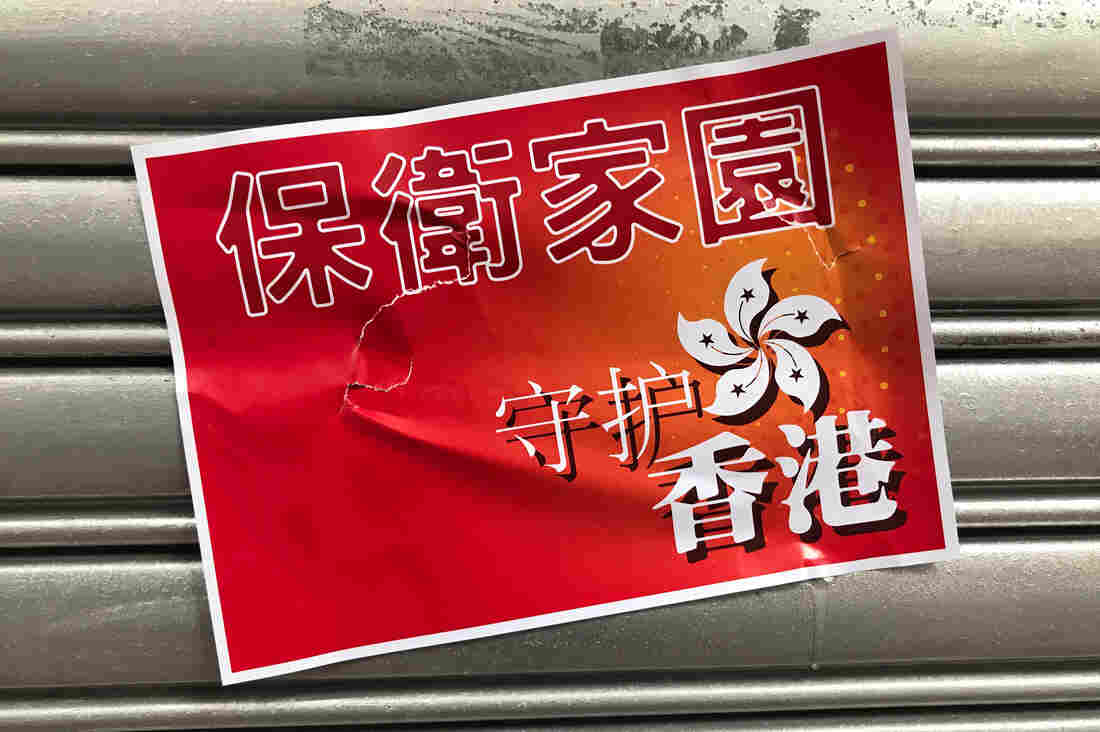 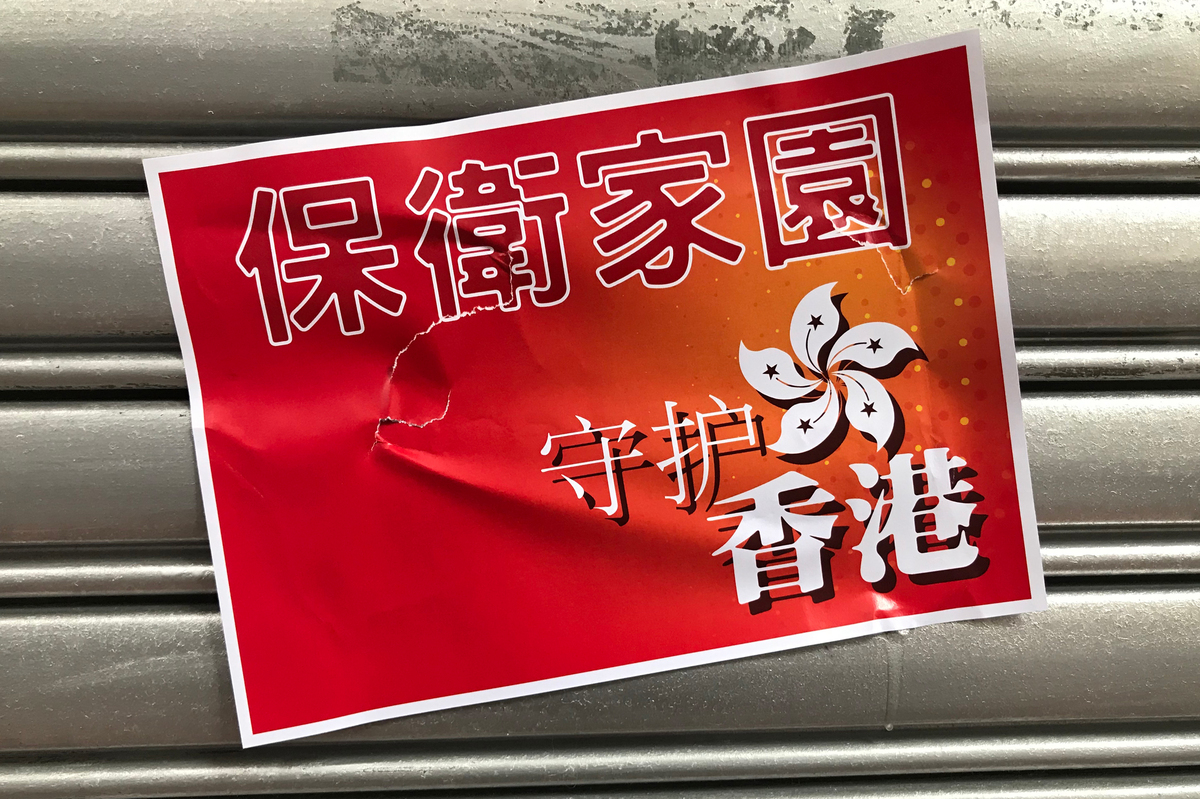 Protesters counter that what's hurting the economy is the U.S.-China trade war and investor dismay at the eroding rule of law in Hong Kong.

According to one poll, the Hong Kong travel industry saw a 74% decline in business in June and July. Insurance policy sales to mainland Chinese customers have slumped between 10% and 20% in the last two months. Imports and exports were already down this year, and shares of Cathay Pacific, Hong Kong's carrier, tumbled to a 10-year low this week, following the suspension of pilots who joined in the demonstrations.

Echoing the Beijing government line, Xiao believes that the U.S. is behind the Hong Kong protests. He believes Washington is stirring up chaos in an attempt to keep China down.

"You want to do business with us? Sure, let's do it," Xiao says. "We'll both benefit. But don't come over here making trouble. The U.S. wants to wipe out the Communist Party. But it can't."

For days, rumors have spread that bands of men have traveled from Fujian province to North Point to attack the Hong Kong protesters. Last week, a fierce melee broke out in North Point, with residents wielding wooden poles and attacking black-clad protesters. In July, white-clad pro-Beijing counterprotesters injured dozens of black-clad protesters and commuters at a subway station in the partly rural enclave of Yuen Long in the New Territories.

The youth produced what looked like a mainland Chinese ID card, suggesting he was not a local resident.

"What's going on here? Who are you?" one cop yelled in Mandarin as the kid's father came out to rescue him. An officer gave the boy a few stern words and then let him go.

Later, police blocked off both ends of the protest route through North Point. The protesters were a no-show. For the moment, it seemed that a larger clash had been averted.

"They decide not to come because of the Fujian people and the people coming from China," said Roger Ng, a civil servant, standing with friends just beyond the police barriers.

He doubted the Fujianese were acting on their own, although he admitted he didn't have any hard evidence.

"I assume they are hired by the Communist Party or Hong Kong government or Hong Kong police," he said. "They hired these people from Fujian, China."

Xiao, the immigrant construction worker, was coy when asked whether people had come from Fujian province to attack the protesters.

"That's what some folks say," he said airily. "We can't shut them up, right?"