Accessibility links
Kitten Lady Hannah Shaw On 'Tiny But Mighty,' Her Guide To At-Risk Cat Care The professional cat advocate and caretaker has penned a new guide, Tiny but Mighty, on how to adopt neonatal kittens, who are often too vulnerable to be housed in standard animal shelters. 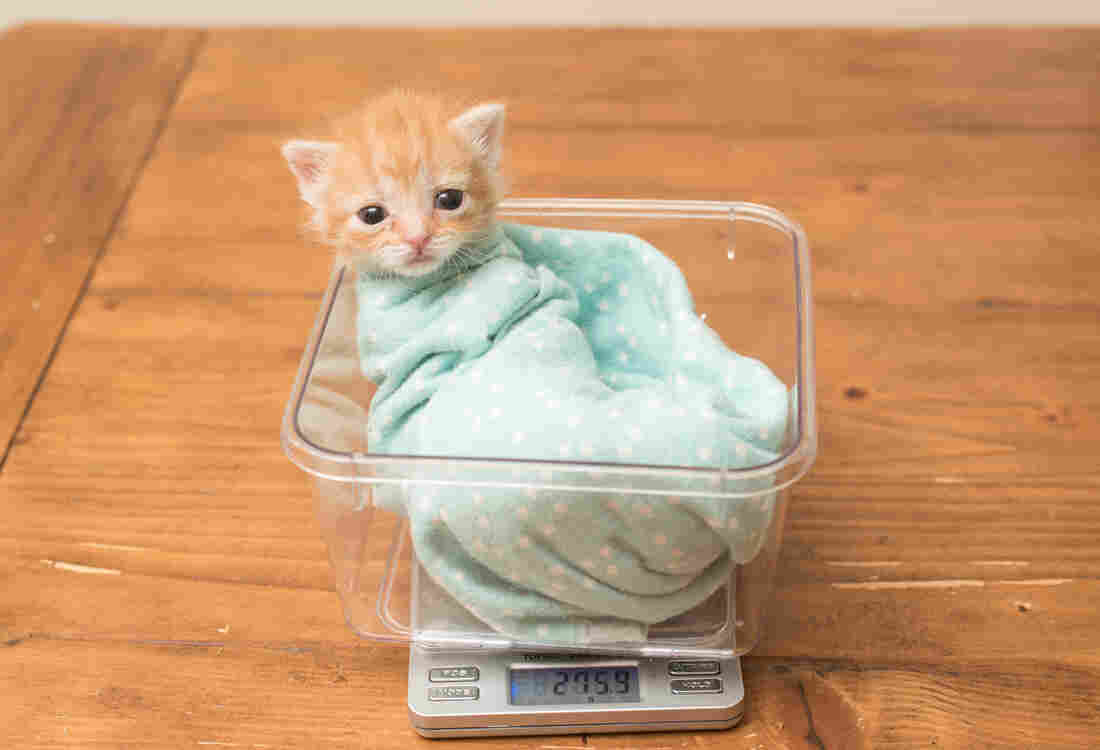 The kitten Hank was infected with fleas and a deadly feline virus before Hannah Shaw took her in. Hank became the cover model for Shaw's new book on neonatal kitten care, Tiny but Mighty. Andrew Marttila and Hannah Shaw/Penguin Random House hide caption 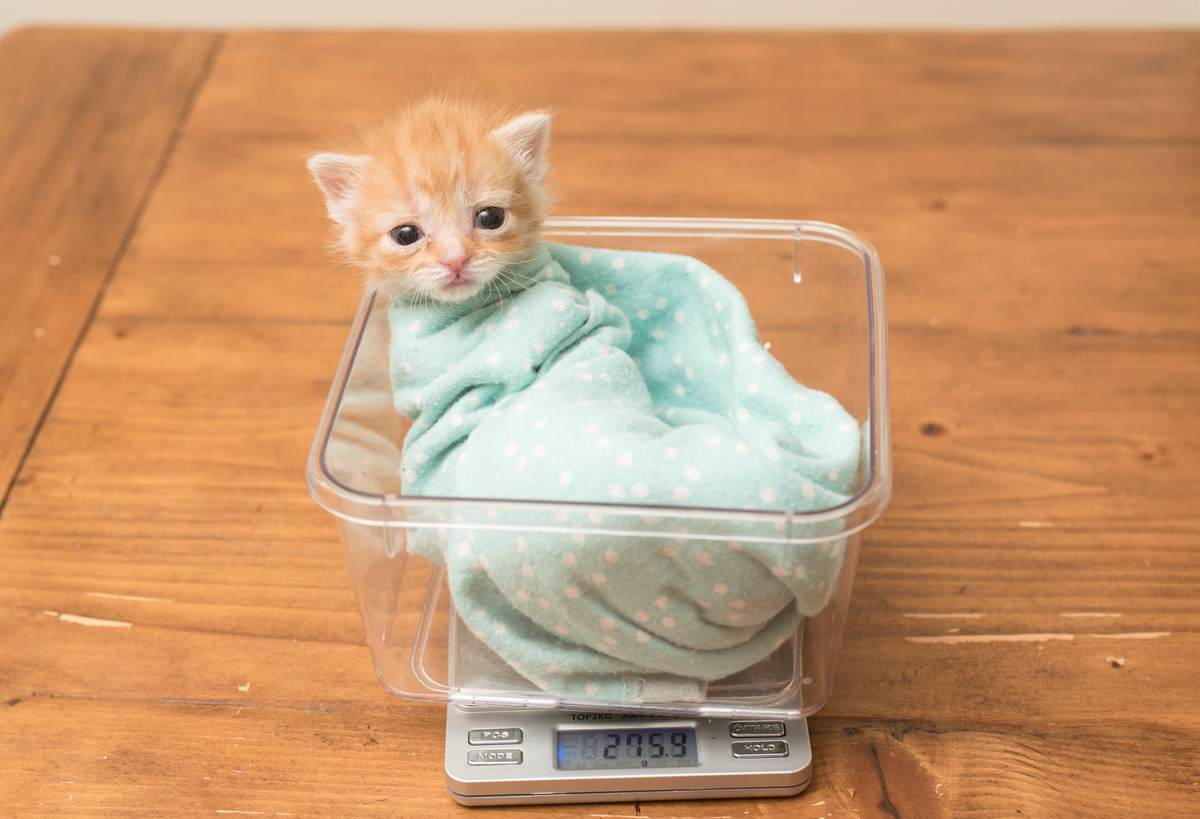 The kitten Hank was infected with fleas and a deadly feline virus before Hannah Shaw took her in. Hank became the cover model for Shaw's new book on neonatal kitten care, Tiny but Mighty. 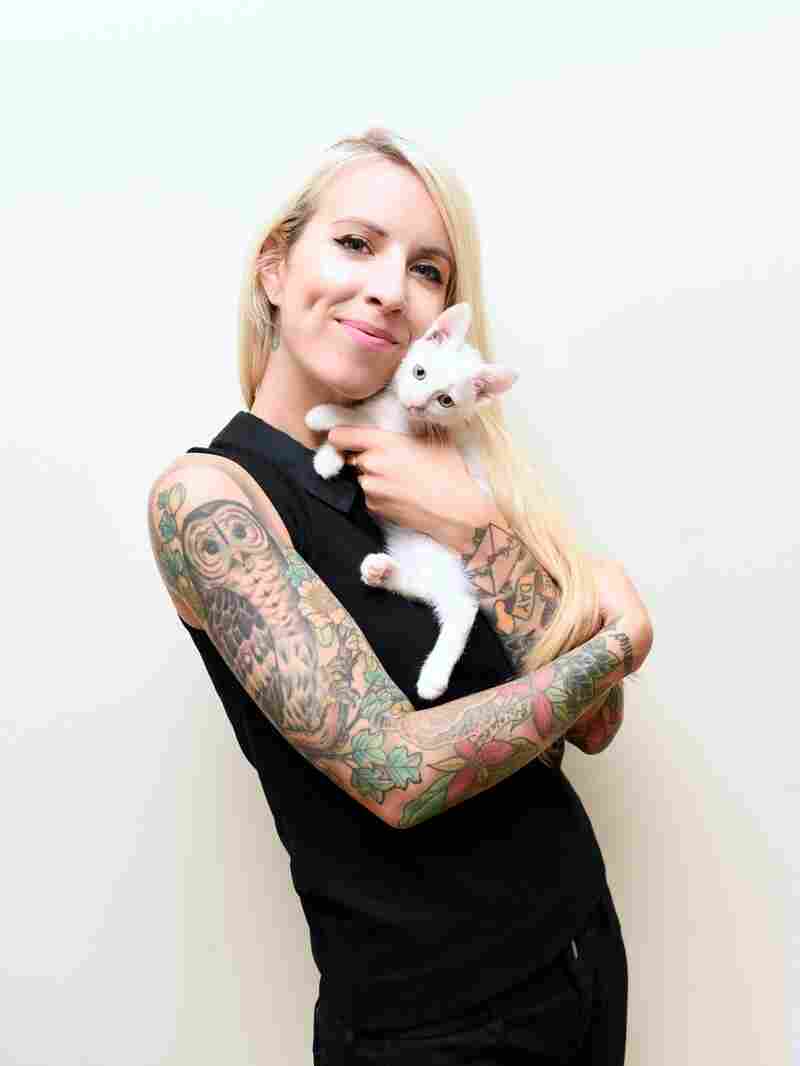 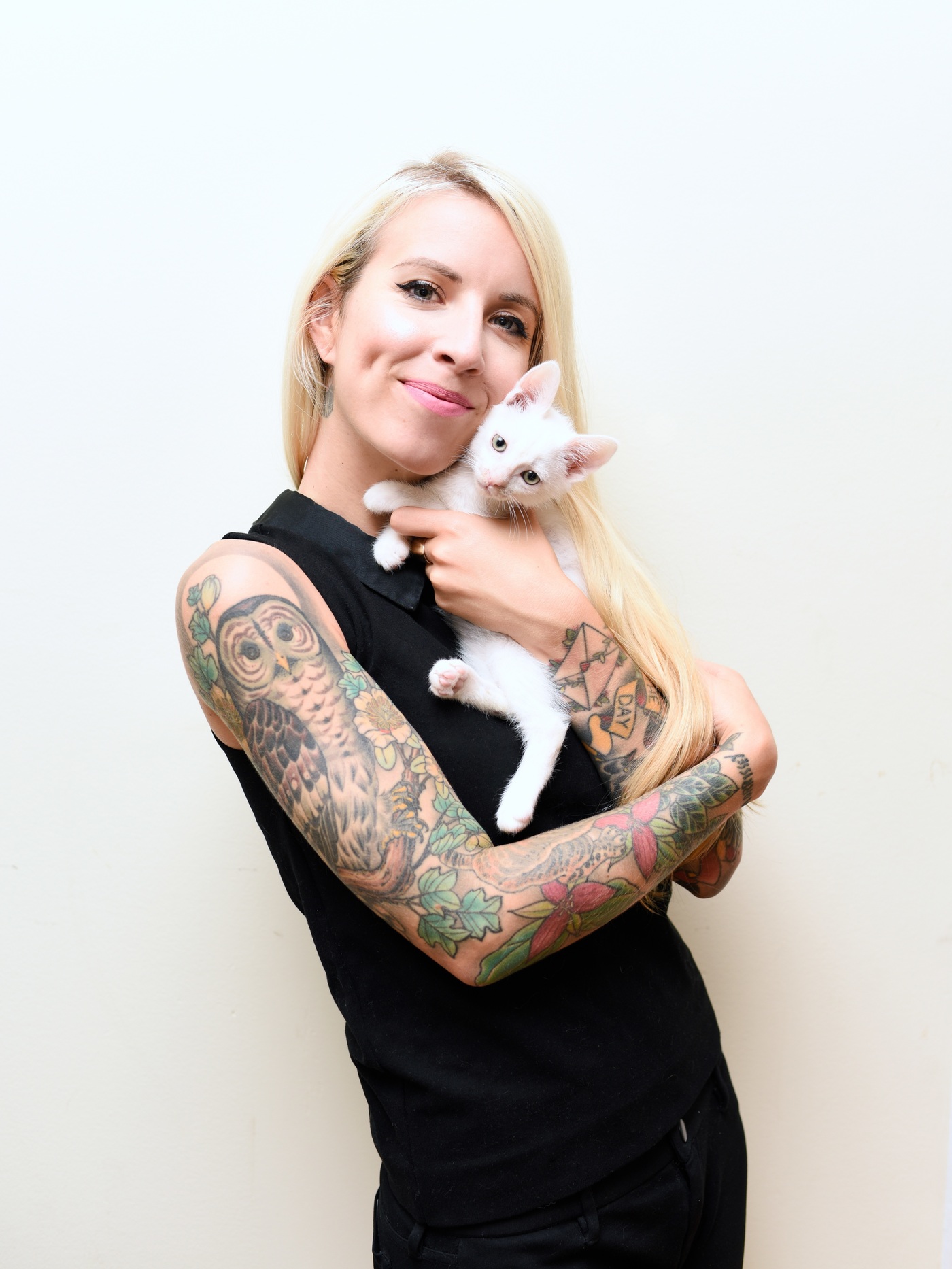 In addition to personally taking care of newborn kittens, Hannah Shaw, known as the Kitten Lady on social media, consults with shelters and cities on homeless cat management.

Known on YouTube and Instagram as the Kitten Lady, Shaw has rescued hundreds of neonatal kittens, often orphaned and unweaned, who are too small and vulnerable to be in an animal shelter. Kittens are a highly euthanized population in shelters because they require a level of care that most shelters cannot provide. That's where Shaw steps in.

"They fit in the palm of your hand. Their eyes are closed. They need around-the-clock feeding and care," she says. "Sometimes they have a life-threatening illness or they are in really critical condition, and I want to be able to give them the attention that they deserve so that they have the best chance to survive."

Shaw's new book, Tiny but Mighty, outlines how to care for the most at-risk felines, and she shares stories from inside her nursery. Her cover kitten, Hank, was dropped off at a pet supply store in a tissue box (hence the full name Hanky) with her umbilical cord still attached. Hank was not only covered in fleas, but her eyes were also infected and she had panleukopenia, a virus that kills 90% of cats when untreated.

"She was my project for an entire week," Shaw says. "For every kitten that I've lost in the past who had [panleukopenia], they've taught me something that helped me to save Hank." After constant monitoring with fluids and tube-feeding, Hank emerged from her illness. "Her eyes were bright — she was like a new cat who was finally learning what it is just to enjoy being alive."

Despite everything she goes through with her rescues, Shaw insists it's not hard to say goodbye when the kittens get adopted.

"I always say that goodbye is the goal of fostering," she says. "My goal always is to get these kittens from being so frail and so fragile and so vulnerable to a place where they're so strong that they don't need me anymore, and they can move on to their adoptive homes."

On why neonatal kittens are less adoptable than older kittens 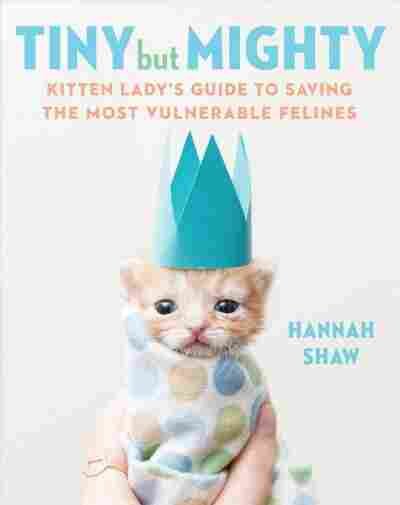 Kitten Lady's Guide to Saving the Most Vulnerable Felines

by Hannah Shaw and Andrew Marttila

A lot of people, when they picture a kitten, they picture an adoptable kitten who's bounding around the house and climbing in your lap and purring. Those 8-week-and-up kittens surely are very adoptable. They are easy to find homes for in shelters. But a very unseen population is neonatal kittens.

So the kittens who come into the shelter who are maybe unweaned, maybe they don't have their mom — a lot of them come into the shelter orphaned. And so these young kittens who are 0 to 8 weeks old: They're actually extremely at-risk in animal shelters, because most programs don't have the ability to take care of kittens who are so young and so vulnerable. ... And so the population that I work with when I talk about kittens, I'm talking about this very vulnerable population of young kittens who enter shelters, and they need more help than can be provided within the four walls of that structure.

If you find a kitten outside, you can assume, if they look like they're clean and they look like they're fed and they're not covered in filth and they're not crying out, these kittens have somebody who's been feeding them. And it's not the local raccoon — it's their mom. So a lot of the time, these kittens do have a mom. ... So we want to always assume that the kittens have a mom, unless they're in a situation where they're very dirty, they're obviously in distress. In those situations, yeah, we can scoop them up, and we want to be able to provide care to those kittens too. ...

I'm known as Kitten Lady. I am dedicating my life to taking care of kittens, but I'll never be as good as a mom cat is at taking care of these babies.

On her kitten nursery at home

Well my dream has been to have this nursery in my home. ... We have a couple different rooms for kittens of different ages and different needs. So our neonate room is really for those newborn kittens when they first come in. People say my house is like kitten Disneyland, but it's also kind of like a kitten hospital. We have a very sterile environment for them. Everything is stainless steel, can be sanitized. We have incubators for those babies (0 to 3 weeks) who come in, and they don't have mom, and they need that constant radiant heat to keep them warm and healthy. I have a refrigerator where all of their formula and medication is capped. We have lots of baby supplies, everything from soft blankets to surrogate mamas that have a little heartbeat inside of them [that] these babies can cuddle up to. Really everything that we need for the tiniest neonates is in that room.

And then we have a room called the socialization room, and the socialization room is for those kittens who are learning how to eat independently. They're learning all of the skills of becoming a tiny cat. So we have enrichment in there, that they can learn how to climb and pounce and play and burrow and do all of the things that a cat can do. ... When I get the kittens in, they typically start out in an incubator, and then we just get to see them through from 0 to 8 weeks all the way to adoption. And we have something for all of them there. 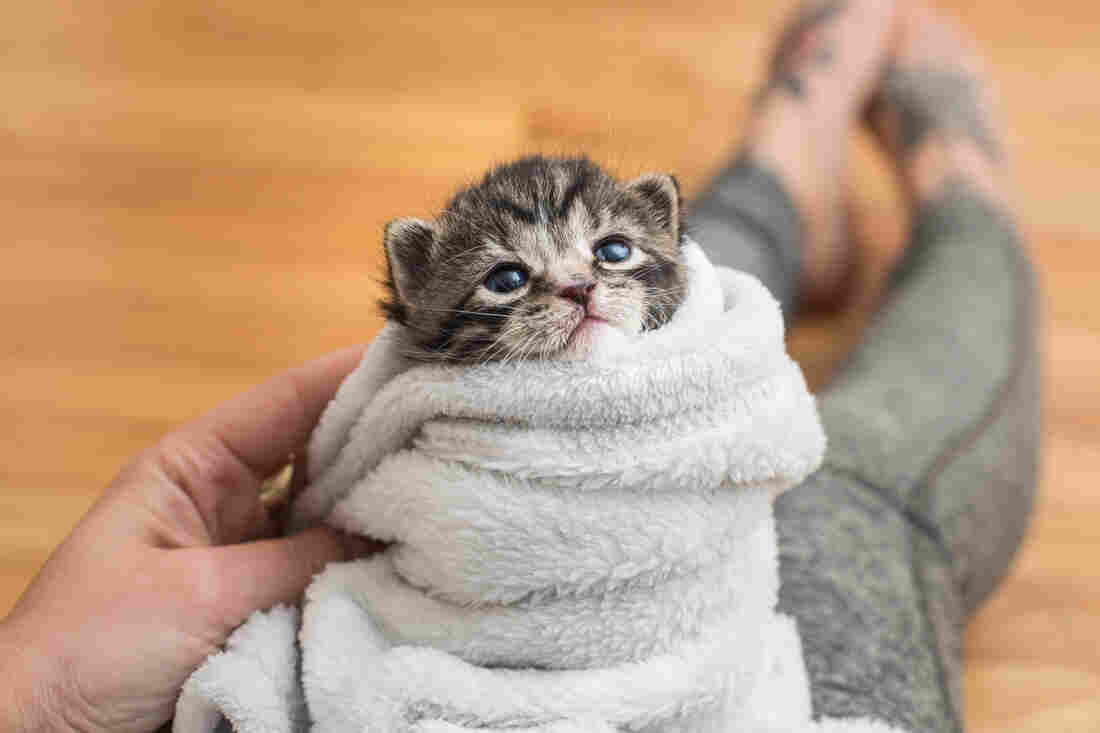 Shaw says that it is critical to provide kittens with a heat source until four weeks of age — as she demonstrates with her young charge Frank. Andrew Marttila and Hannah Shaw/Penguin Random House hide caption 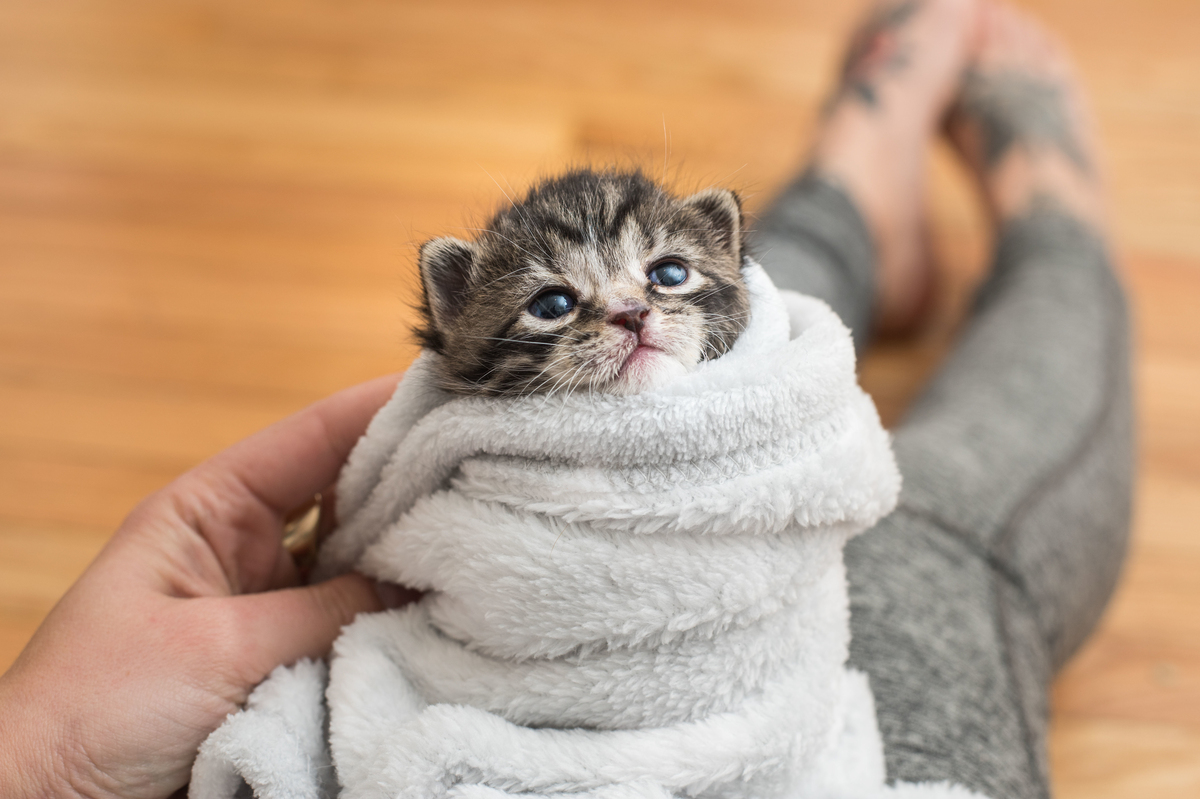 Shaw says that it is critical to provide kittens with a heat source until four weeks of age — as she demonstrates with her young charge Frank.

On helping kittens use the bathroom

Little baby kittens, when they have their mom, mom will stimulate them to go to the bathroom by licking their butt and their genitals, and she stimulates them, so it lets their body know, "Oh, it's time to go potty." And she also actually consumes their waste. ...

When you're a surrogate mom, you just have to simulate the feeling that they are being stimulated. So I use either a warm, wet baby wipe or a soft tissue, and you're really just rubbing that area for a number of seconds so that they go to the bathroom in the cloth, and then you just toss that out and wipe them up with a baby wipe. And that's only for the first couple of weeks.

On grooming kittens with a toothbrush

Darkness Provides A Fix For Kittens With Bad Vision

I use a toothbrush a lot in my nursery for many different reasons. You know, one for grooming, but also for comfort. I'm talking a lot about simulating maternal behaviors for these kittens, and mom cats, they keep their kittens meticulously clean and they also comfort them through licking, and so they have those barbed tongues. And a toothbrush is just about the right texture and size to help these kittens feel like they do have a mom who's licking them and comforting them and keeping them clean. And being able to simulate those behaviors for the kittens helps them become better at grooming themselves and helps them feel well-adjusted and cared for.

On meeting her fiancé Andrew Marttila, "The Cat Photographer"

At the time, I was fostering two neonatal kittens who were both singletons ... I took these two kittens in separately, and I was raising them separately for disease-quarantine reasons. And I thought: Wouldn't it be cute to do a photo shoot of these two baby kittens meeting another kitten for the first time, because they'd never met a cat or a kitten? So I scheduled a photo shoot for Andrew to come, and we did this cute set of two orphan kittens meeting together for the first time ... and ultimately those two kittens, Bruno and Boop, were able to get adopted together. They became best friends. And it turned out that Andrew and I were also inseparable from that point on. I think our second date was at a cat café, and our third date I taught him how to trap cats, because he had never done TNR [trap, neuter, return] before. So we ended up being this powerhouse of feline advocacy.

Amy Salit and Mooj Zadie produced and edited this interview for broadcast. Molly Seavy-Nesper and Patrick Jarenwattananon adapted it for the Web.