Accessibility links
VIDEO: Vehicle Drives Into Crowd Of ICE Protesters Outside Detention Facility "The driver stepped on the gas and revved up and started plowing forward," said a protest organizer. A correctional officer from the facility has been placed on leave. 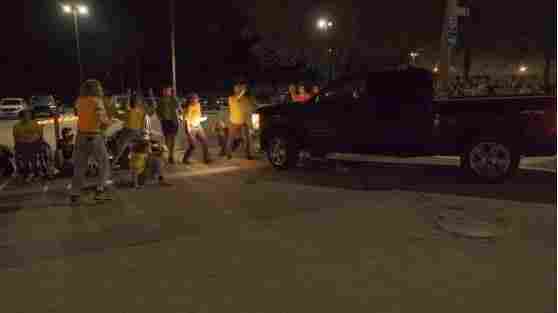 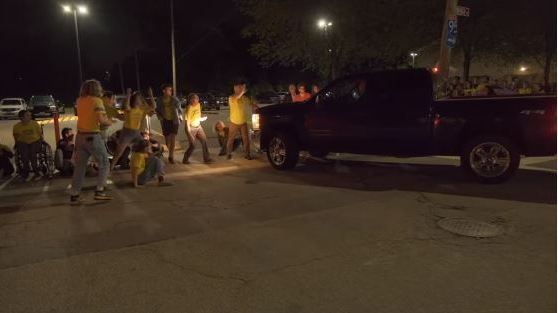 A man drove a truck into a group of peaceful demonstrators protesting Immigration and Customs Enforcement policies outside a detention facility in Central Falls, R.I., on Wednesday evening.

After a video of the incident went viral, the Donald W. Wyatt Detention Facility said that it has placed a correctional officer named Thomas Woodworth on administrative leave pending an independent investigation. A spokesperson for the facility would not confirm that Woodworth was the driver, saying that is "subject to the investigation."

The protest was organized by a group called Never Again Action, which says that several demonstrators sustained injuries there. The group is made up of Jewish community members "protesting the prison's contract with ICE and the inhumane treatment of these people by ICE," protest organizer Amy Anthony told NPR.

It started with interfaith leaders giving speeches and demonstrators singing songs. Later in the evening, Anthony said, the protesters moved to block the entrances to the facility's staff parking lot. Video of the incident shows a group of several dozen people chanting.

"The mood was very calm and there was no sort of warning or indication that anything violent was about to happen," Anthony said.

Suddenly, a black pickup truck moves at high speed toward the group. It honks as some of the protesters scream and scramble to get out of the way. Protesters yell "Shame!" and "The whole world is watching!" The truck pauses.

"I saw that the truck was stopped, and then after some hesitation the driver stepped on the gas and revved up and started plowing forward, despite the fact that there were people standing right in front of the truck and people still sitting on the ground," she said.

Watch the video here — and we should note that it is disturbing.

A later video from the scene shows a group of guards rushing toward the confrontation. A few seconds later, a cloud of gas appears in the crowd and a woman is carried away. "I can't breathe; I'm going throw up," she says. "I got pepper sprayed."

After the driver parked, "he got out of the truck and he joined his colleagues in the driveway to form a perimeter and he just stood there staring at us," Anthony said.

The Wyatt Detention Facility describes itself as a "quasi-public operation." It houses up to 730 adult male inmates and up to 40 women. ICE detainees are housed in the facility, which also has detainees from the Federal Bureau of Prisons, the U.S. Navy and the Mashantucket Pequot Tribe.

Rhode Island's Office of the Attorney General said it has launched an investigation into the incident with Rhode Island State Police.

"Once we have a full understanding of the relevant facts, we will determine how to proceed," said a statement from the attorney general. "Peaceful protest is a fundamental right of all Americans; it is unfortunate last night's situation unfolded as it did."

A statement from the detention facility also said its warden is "conducting a top to bottom review of the incident, Wyatt correctional officers' response, and the Wyatt's protocols regarding protest activities outside of the facility."

ICE said in a statement that its personnel "were not involved in the protest response that occurred on Wednesday night."

The group is vowing to continue protesting. "We're really concerned about people's safety, of course, but we are not deterred by this," Anthony said. "We were harmed by this, but we want to keep in mind that the people who are in ICE custody are being harmed every day."

A previous headline and version of this story referred to the vehicle involved as a car. It is a truck.