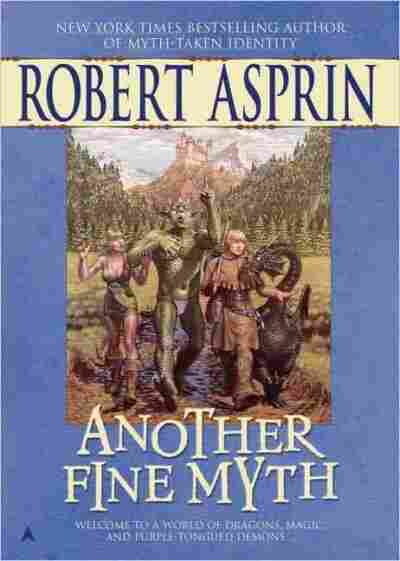 Ever since George R. R. Martin's A Song of Ice and Fire series stole our hearts, minds, and television screens, fantasy literature has gained a reputation for being so grim and dark that there's a whole subgenre of it called, unimaginatively, grimdark. But it was not always thus. Granted, in the '70s and '80s, fantasy contained plenty of proto-grimdark works, most notably Stephen R. Donaldson's The Chronicles of Thomas Covenant and Roger Zelazny's Amber books. But that period was also a golden age for humorous fantasy novels, works that skewered the genre while positioning themselves as full participants in the canon: Terry Pratchett's Discworld, Craig Shaw Gardner's Ebenezum, and Robert Asprin's rollicking Myth Adventures.

The premise behind the Myth Adventures series is charmingly simple — and its simplicity is one of its strengths. Skeeve is a young magician's apprentice in a pseudo-medieval, backwater world whose mentor dies in the first few pages of the series' debut installment, 1978's Another Fine Myth. A clueless lad with vague aspirations toward using his burgeoning magic (or magik, as it's known in the Myth world) to become a thief, Skeeve quickly lands up to his neck in world-shaking intrigue thanks to the appearance of Aahz, a green-scaled demon and acquaintance of Skeeve's former master.

Myth Adventures ... relies on whimsy, lightheartedness, playful buddy-movie banter, and, ahem, comic myth-understandings — not to mention a clever way of puncturing the tropes of fantasy that both ridicules and celebrates them.

As it turns out, Skeeve's entire worldview is quaint and naïve; what he knows as demons are simply visitors from other dimensions. In fact, the word "demon" itself, as Aahz explains, is short for "dimensional traveler." (Yes, you need to stretch your understanding of spelling at times while reading Myth Adventures.) Aahz himself is a magician, but he's inexplicably lost his powers — so he and Skeeve form an oddball alliance as they embark on a quest to stop the evil Isstvan from taking over every dimension in sight.

What makes the Myth Adventures series so successful — and ultimately so enduring — is the nature of its humor. As the titles of the novels imply, Asprin heaps every conceivable pun involving the word "myth" on his readers: Another Fine Myth is followed by Myth Conceptions, Myth Directions, Hit or Myth, Myth-ing Persons, and so on, in a mercilessly lisp-inducing procession. But Myth Adventures doesn't build too many puns into the text itself. Instead, it relies on whimsy, lightheartedness, playful buddy-movie banter, and, ahem, comic myth-understandings — not to mention a clever way of puncturing the tropes of fantasy that both ridicules and celebrates them. Dragons and unicorns play tag; court magicians have to pay the kingdom for their collateral damages; and "choosing magic for a career path is not the best way to ensure living out one's normal life span."

In Myth Conceptions, Aahz tells Skeeve, "Well, kid, it looks like we're stuck with each other. The setup isn't ideal, but it's what we've got. Time to bite the bullet and play with the cards we're dealt. You do know what cards are, don't you?" "Of course," Skeeve replies, slightly wounded. "What's a bullet?" As the series develops, Skeeve experiences more and more dimensions; accordingly, his horizons widen, and he becomes a great proxy for the reader being whisked away by Asprin's formidable imagination. The cosmology of the Myth multiverse isn't as profound or philosophical as that of Pratchett's Discworld, but it does spiral outward dizzyingly. And although Asprin died in 2008, his collaborator on later volumes of the series, Jody Lynne Nye, has continued on in his absence, helping produce the 21 volumes of Myth Adventures to date.

Longevity alone isn't a mark of timelessness, and sure enough, there are instances of casual sexism scattered throughout the series, as there is in too many fantasy novels of that era. "I should of known he was married. I mean, nobody that young is THAT bald unless he's got a wife at home," Aahz exclaims in Myth Conceptions. But what Myth Adventures lacks in enlightenment, it makes up for in strong female characters like the assassin Tanda, a frequent companion of Skeeve and Aahz as they bumble, scheme, and spell-cast their way across dimensions.

In Asprin's self-written bio in the back of Another Fine Myth, he says this "first sally into the field of sword and sorcery promises to be to devotees of that genre what gunpowder was to warfare: a new and exciting way of getting the point across ... but totally unreliable and impractical." In his self-deprecation, he was wrong about one thing: Myth Adventures did turn out to be reliable. One of the most endearing things about the series is the epigraphs at the start of each chapter, all of them as fictional as they are silly: "You gotta speak the language." –N. Webster; "Has anybody got a plan?" –G.A. Custer; "Good information is hard to get. Doing anything with it is even harder!" –L. Skywalker. Yes, it's enough to elicit groans. But there are worse things in the world than a little dad-joke fantasy, especially in a world getting grimdarker by the moment.