Accessibility links
StoryCorps: Their 'Tough' Mom Was Also The Navy's 1st Asian American Woman Susan Ahn Cuddy didn't fit the 1950s housewife mold. For one, she was an expert in air combat tactics. It wasn't until after her death in 2015 that her kids understood the full extent of her legacy. 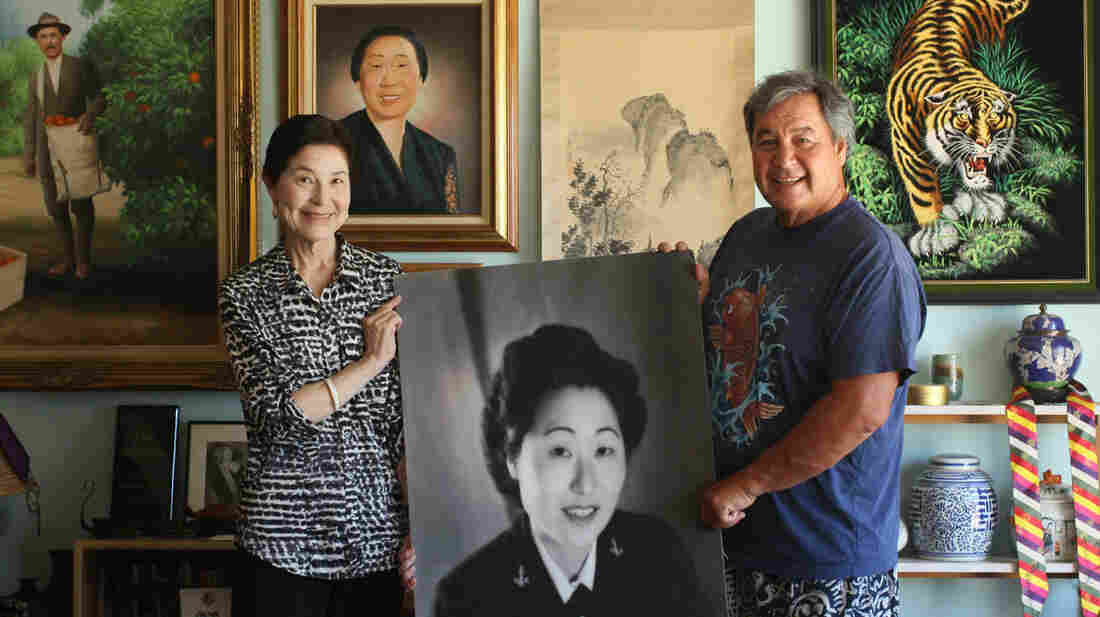 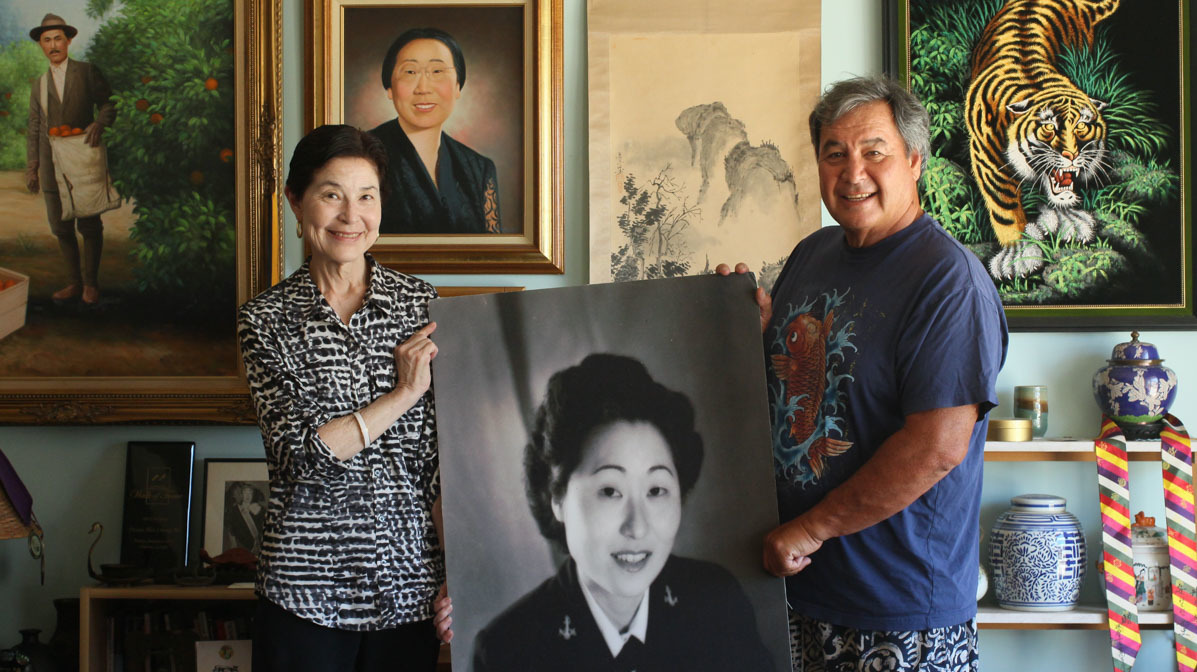 Siblings Christine Cuddy (left) and Flip Cuddy hold a photo of their mother, Susan Ahn Cuddy, the first Asian American woman in the Navy, at their StoryCorps interview in Northridge, Calif., last July.

Editor's note: This story contains language that some listeners may find offensive.

But she was also a Korean American lieutenant in the U.S. Navy who trained pilots to shoot down enemies during World War II.

It wasn't until historian John Cha's biography of Susan was published in 2002 that her children learned about many of their mother's accomplishments.

"Mom basically was a trained killer," Flip, now 64, said in an interview with Christine, 69, at StoryCorps last year. "She's a much different parent than, you know, someone who owned a bakery."

Susan, who was born in the U.S. and died in 2015 at age 100, was the first U.S. woman gunnery officer and the first Asian American woman in the Navy — an unlikely leader for the time, teaching air combat tactics to white men.

After serving about 5 years in the Navy, Susan worked as a researcher at the National Security Agency, where she gathered intelligence on the government of the then-Soviet Union.

Flip said he's now read his mom's biography at least 10 times, but learning her history over the years was a process. On the surface, he thought of his mom as "a perfect government employee."

As a parent, she took a pragmatic, hands-off approach.

"She was really unusual," Christine said. "She'd been through so much, teaching guys how to shoot. It's like, what do you need to teach a kid? You know? Go out and play."

Flip remembered how she had her own code.

"If somebody was really an idiot, you know, she would say they were 'limited,' " Flip said.

Christine called it "one of her most heavy-duty criticisms."

"She was tough," she said; Flip agrees.

Flip and Christine attribute Susan's patriotism to her father, Ahn Chang-ho, an activist who fought against Japan's occupation of Korea and was killed by the Japanese in 1938.

So when the Japanese attacked Pearl Harbor, Susan felt compelled to enlist.

According to Susan's biographer, John Cha, Susan first tried to sign up for naval officer's school. Although she was qualified, her son Flip said, she was turned away because she was Asian.

Instead, she enlisted as a service member. After excelling at basic training, she was selected as a candidate for officer school, and finally accepted.

"It was a white world and if you wanted to do anything you just had to forge ahead," Flip said.

Her mother, a 5-foot-1-inch Korean American officer, loved to tell stories about her interactions with her male trainees, Christine said. 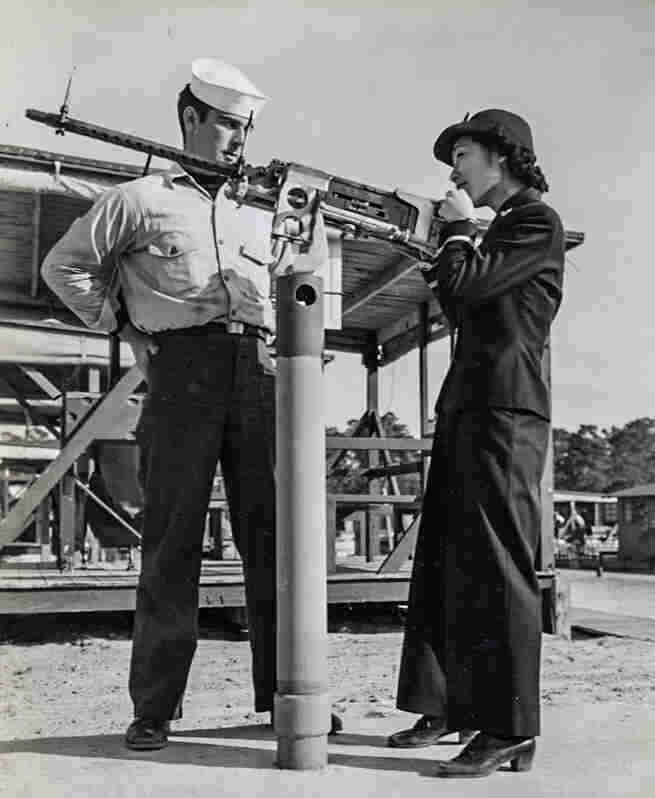 In 1943, Susan Ahn Cuddy is seen at the Pensacola U.S. Naval Air Station in Florida, instructing a sailor on how to fire a .50-caliber machine gun. Courtesy of Flip Cuddy hide caption 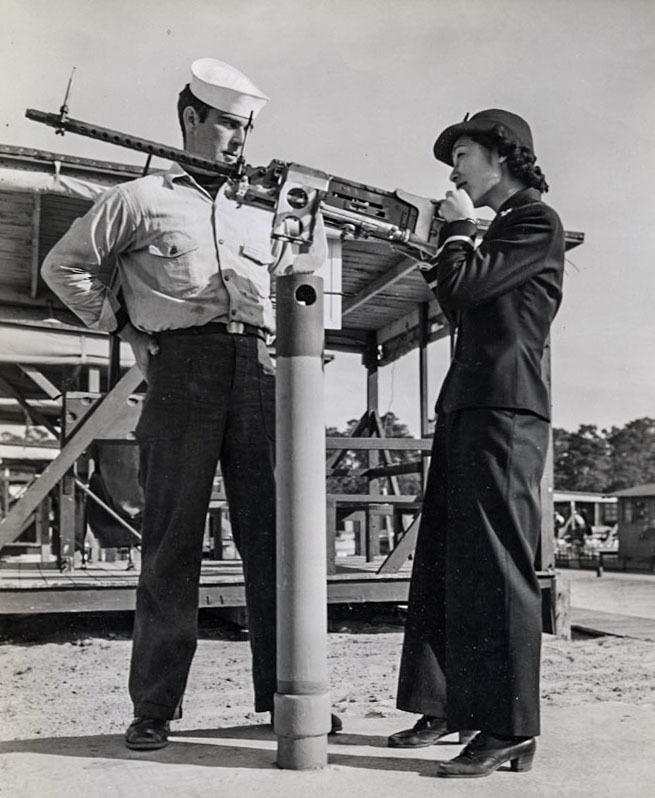 In 1943, Susan Ahn Cuddy is seen at the Pensacola U.S. Naval Air Station in Florida, instructing a sailor on how to fire a .50-caliber machine gun.

Flip recalled one memorable incident during a weapon training course.

"She talks about when you're going to start shooting," he said. "And so this guy goes, 'I'm not shooting until I see the whites of those Japs' eyes.' "

Ignoring the slur, and true to character, Susan took charge.

For her children, her legacy looms large.

"I mean, how do you describe a person like that?" Flip said. "Who's a leader and successful at everything she does?"

Flip and Christine count themselves lucky to have had such an inspiring mother.

"I also would just say to Mom, what an incredible life you've lived," Christine said.