Accessibility links
Review: 'Do You Dream Of Terra-Two?' By Temi Oh Temi Oh's new novel follows a group of teenagers, trained as elite astronauts, on a 23-year mission of no return to a nearby planet. They set off with high hopes, but things quickly go wrong.

Tragedy Beats At The Heart Of 'Do You Dream Of Terra-Two?'

Tragedy Beats At The Heart Of 'Do You Dream Of Terra-Two?' 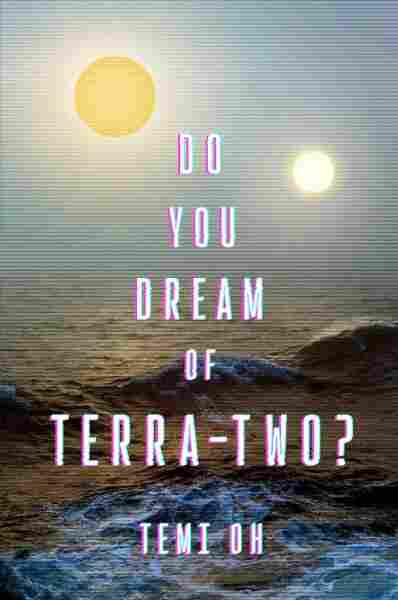 Do You Dream of Terra-Two?

Title
Do You Dream of Terra-Two?
Author
Temi Oh

There's a pulse that runs through Temi Oh's debut novel, Do You Dream Of Terra-Two. A living, beating heart that races and stalls, stutters and recovers; that pounds in rage and desperate longing, in fear, in mortal goddamn terror; that slows in calm, in crushing sadness or the perfect tranquility of memory; that occasionally stops.

There is a rhythm, sometimes breakneck, sometimes the opposite. It is the conjoined pulse of six living teenagers (plus one dead one) who have been chosen from among hundreds to leave the spoiled Earth and fly away to another, fresh, perfect planet far, far away. The voyage will take them 23 years. They'll be all grown up by the time they arrive — having given up everything and everyone they ever knew for the chance to be the first pioneers to set foot on a virgin planet. We (and they) are told that they are England's best and brightest. We (and they) are told that they are the bravest children who have ever lived. We (and they) believe it.

'Do You Dream' is an oddity for a science fiction book. It is slow, contemplative, moody.

Do You Dream is an oddity for a science fiction book. It is slow, contemplative, moody. It doesn't even make it into space for more than a hundred pages, and when it does, space is ... dull. Beautiful sometimes, dangerous as hell, but just exactly as boring as a whole lot of nothing must eventually become to those forced to live in it.

The book takes place in an alternate world where rocketry and the space sciences advanced much faster than they did here; where, a hundred years ago, a woman named Tessa Dalton had dreams of a nearby earth-like planet that had everything we love about this rock but no people at all. She dreamt about it so much that she became an astronomer, found it, proved it existed, went crazy, died in an asylum.

A hundred years later, in this alternate 2012 (or so), there is a school that exists solely to train tomorrow's astronauts. It takes the smartest of all the children in the U.K. and then smashes them into each other for years and years until only the best of them are still standing. Metaphorically speaking.

'Jade War' Is A Magical, Operatic Crime And Family Drama

Imagine your worst nightmare version of cramming for finals. Then imagine doing it every night, for years, with every one of your classmates in competition for one of six spots on a spaceship called Damocles which will leave earth and spend 23 years flying to Terra-Two — the other earth that Tessa Dalton discovered a century ago. The "winners" will never see their families again. Will spend decades without rain, without trees, without sunsets. They (along with four experienced adult astronauts) will hurl themselves into space and go away forever with only the vague promise that maybe, maybe they'll reach a newer, better Earth on the other end.

But then comes the flight. And at this point we have known our six (or seven) teenaged POV characters for chapters upon chapters. The arrogant rich boy who never fails at anything, the quiet loner with the broken heart who makes robots, the twin sisters, the moody, beautiful girl who looks good on camera, the doe-eyed botanist driven by demons. Since Oh has taken such time and such care sketching them for us in the run-up, we are already fully invested by the time the engines light and the shuttle lifts.

Oh is fantastic at writing about growing up — about the fear and the intimacy, the misery and exultation.

Oh is fantastic at writing about growing up — about the fear and the intimacy, the misery and exultation. She's particularly good about documenting it happening at the hothouse speeds bred by close-quarters and diminished options. These kids are homesick and depressed, scarred by their years at the Dalton Academy, brilliant but vicious. They are honed and polished weapons made for destroying each other, and it takes precisely zero time before every problem they had on Earth comes back magnified a hundred times by the pressure of living in a spaceship with nothing ahead but 23 years of the same-old-thing. 23 years with no one to turn to but each other. 23 years with no hope of rescue should something go wrong.

And guess how long it takes before something (everything) goes terribly, terribly wrong.

This is Oh, in the heads of one of her teenagers, discussing mortality experienced up close and personal:

For marooned sailors, the ocean might never be the same after they'd watched it devour another crew. It could come to seem like death personified, death with a will, death with splendid, terrifying power. And so it was for Astrid that day ... Here was death, again, calling their names, and she had touched it.

Which is gorgeous. Thoughtful. Contemplative. It is the slow pulse that comes so close upon a rampaging disaster that time seems to bend around it, and just ahead of another tragedy following close behind.

This is the heartbeat of Do You Dream — the quick/slow quick/slow rhythm of plot and language that Oh uses to carry her story through a maze of flashbacks, alternate viewpoints, character changes and time jumps. I didn't love the way she chose to end it. There were some narrative choices and character moments that didn't land for me as things accelerated toward the final pages. But the ride itself was more than worth it. These kids and what they've seen? I wouldn't have traded places with any of them.

Even for the miraculous chance to be the first to see a new world at the end of the trip.