Accessibility links
U.S. And The Taliban May Be Near A Deal. What Does That Mean For Afghanistan? The Afghan government has been left on the sidelines as the U.S. and the Taliban have held multiple rounds of talks this year in the Gulf nation of Qatar. 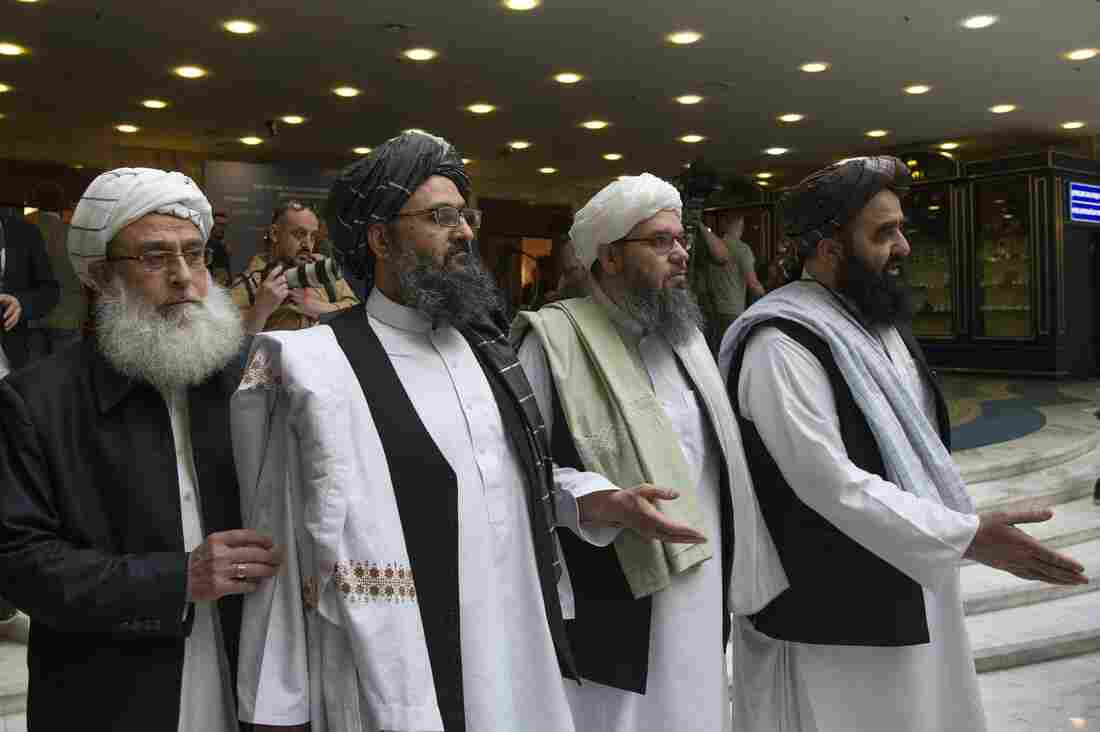 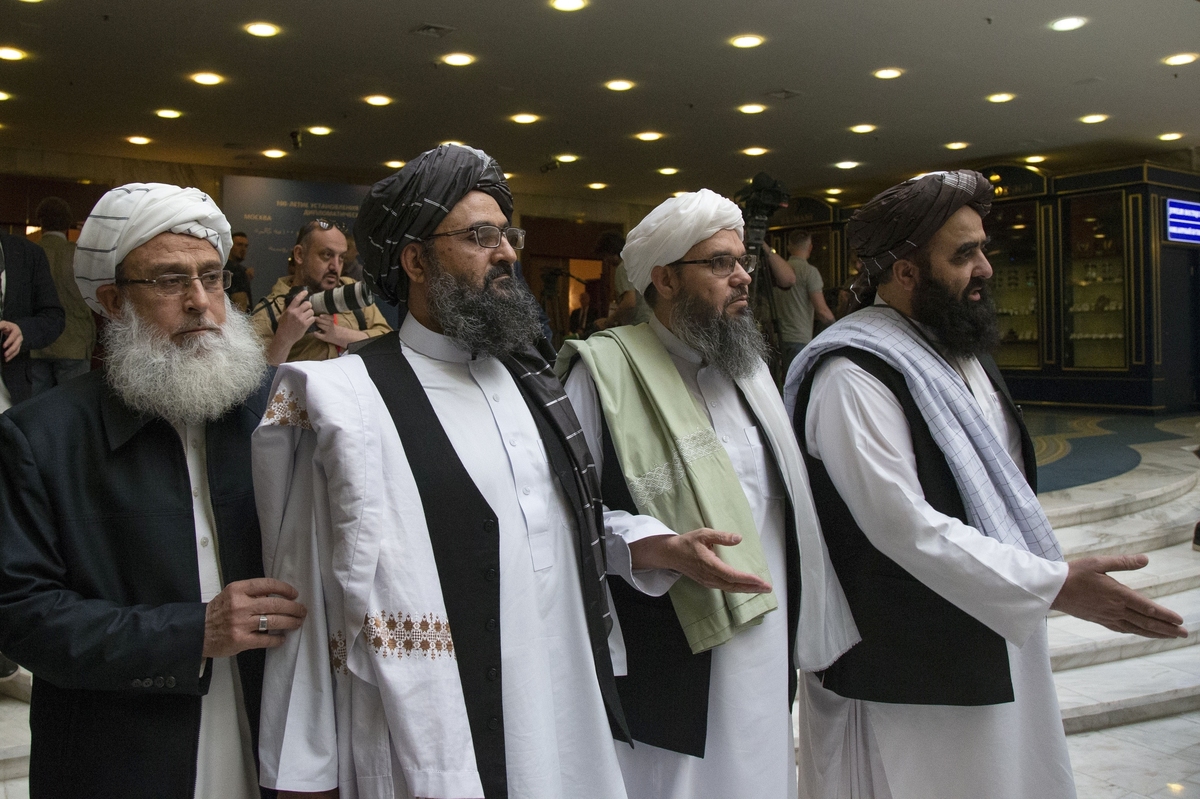 Mullah Abdul Ghani Baradar, the Taliban's top political leader (second from left), has been involved in the group's negotiations with U.S. officials.

Nearly two decades into the war in Afghanistan, the U.S. suddenly appears to be nearing an agreement with the Taliban that could bring the remaining 14,000 U.S. troops home.

That's causing unease inside the Afghan government, which has been left on the sidelines as the U.S. and the Taliban have held multiple rounds of talks this year in the Gulf nation of Qatar. The latest round wrapped up last week without a deal, but with signs of progress.

Roya Rahmani, Afghanistan's ambassador to the U.S., said that while she supports efforts toward peace, "peace negotiations would start when the Taliban are able and ready to face the Afghan people, the people they are fighting, and their legitimate elected government."

The Taliban seized power in her homeland in the 1990s, when she was a teenager. She spent most of those years as a refugee in Pakistan, but in visits home during that time, she says she "found my country drained of energy and worse than that, drained of hope." 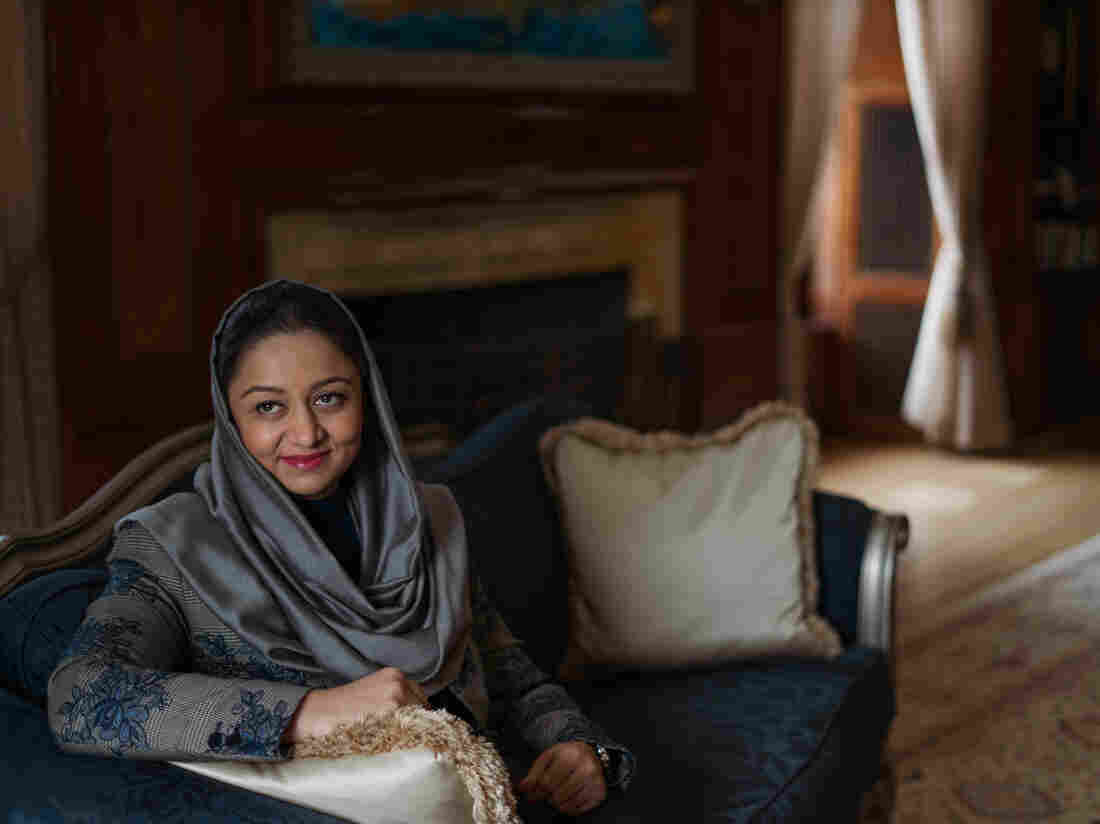 Afghan Ambassador to the U.S. Roya Rahmani remembers that her country was "drained of energy" when the Taliban was in power. Amr Alfiky/NPR hide caption 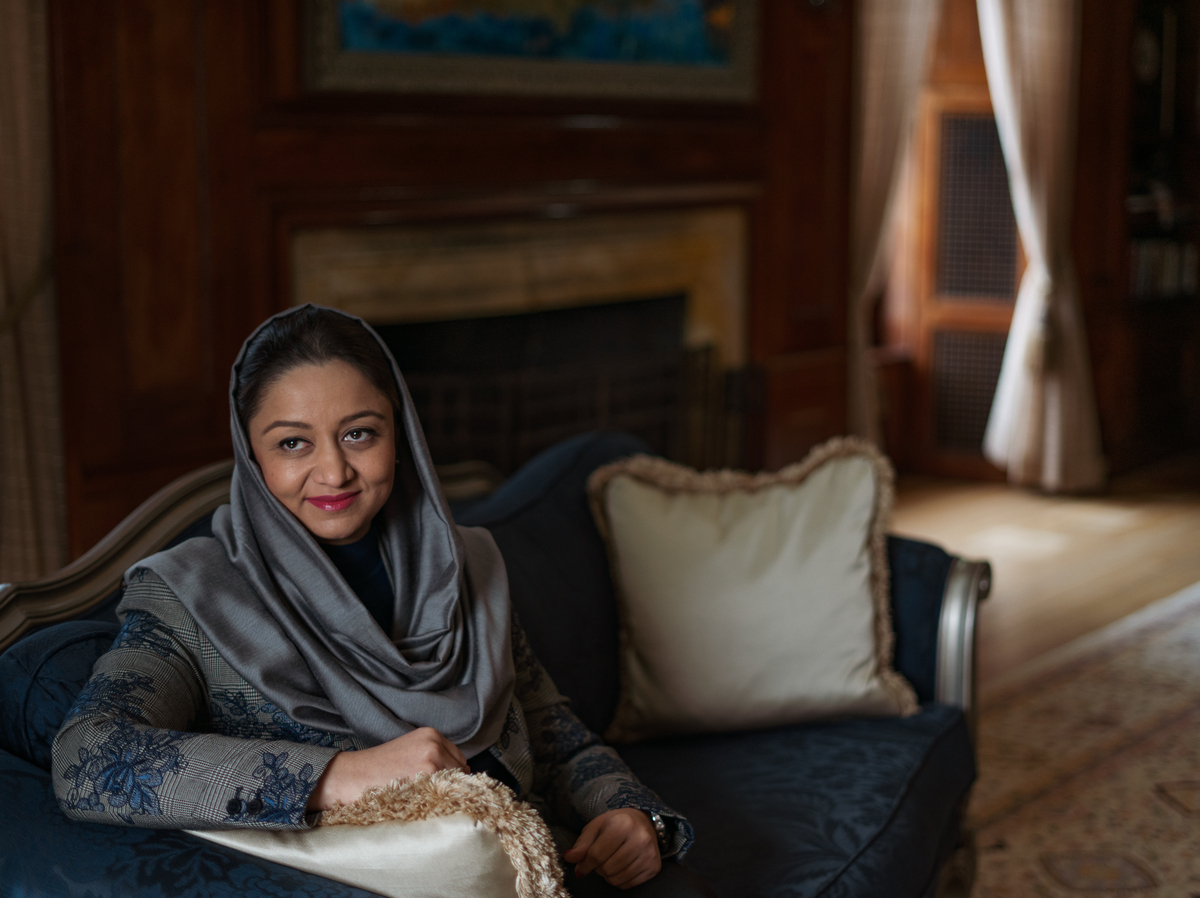 Afghan Ambassador to the U.S. Roya Rahmani remembers that her country was "drained of energy" when the Taliban was in power.

Many analysts are wondering whether a U.S.-Taliban deal is simply a way for the Americans to pull out of a gridlocked war, or will it lead to a genuine peace in Afghanistan.

"It remains to be seen if this is a negotiation that just concludes the U.S.'s role in Afghanistan, or if these are negotiations that actually conclude the Afghan conflict and help bring some degree of sustainability to the region after over four decades of war," said Dan Feldman of the Center for American Progress. Under President Barack Obama, he served as the State Department's special representative for Afghanistan and Pakistan.

"That will depend in large part on the leverage that the U.S. will continue to have to encourage and facilitate an intra-Afghan negotiation that will actually achieve some stability in the country," he added.

President Trump has said he wants to bring the U.S. troops home and is suggesting that a deal is plausible.

"Many on the opposite side of this 19 year war, and us, are looking to make a deal - if possible!" he tweeted on Friday.

But there are still obstacles.

The Taliban want a timeline for all U.S. troops to leave. According to people familiar with the talks, the period under discussion would be two years or less.

The U.S. says the Taliban must agree on several things: a permanent cease-fire, renunciation of al-Qaida, and negotiations with the Afghan government. 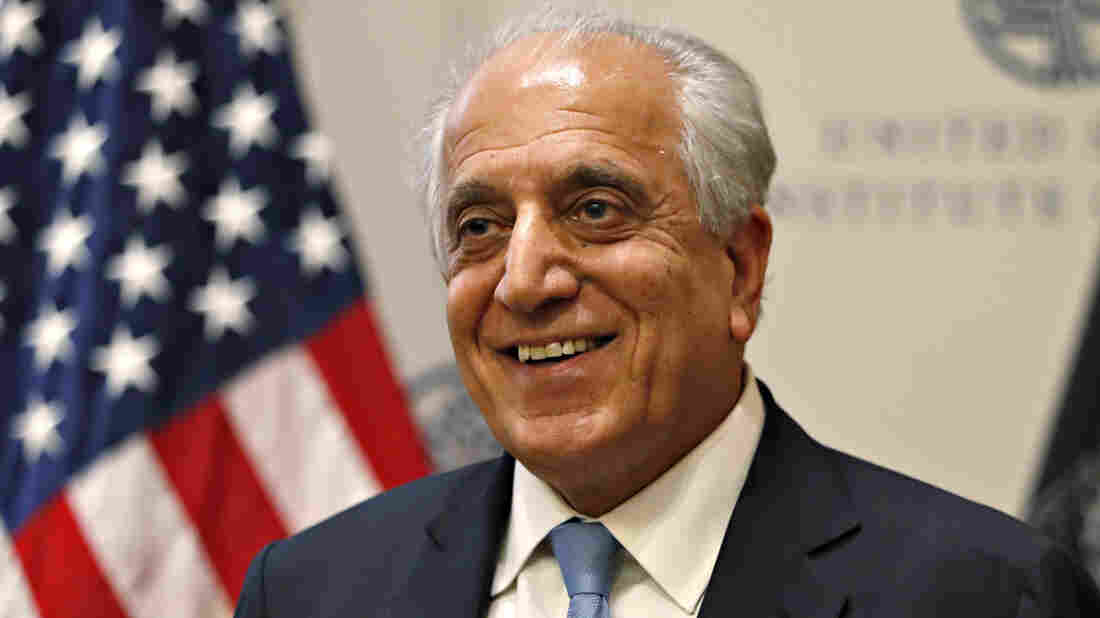 Zalmay Khalilzad is leading the U.S. negotiations with the Taliban. After months of talks, the two sides appear close to a deal that could lead to the withdrawal of U.S. troops in Afghanistan. Jacquelyn Martin/AP hide caption 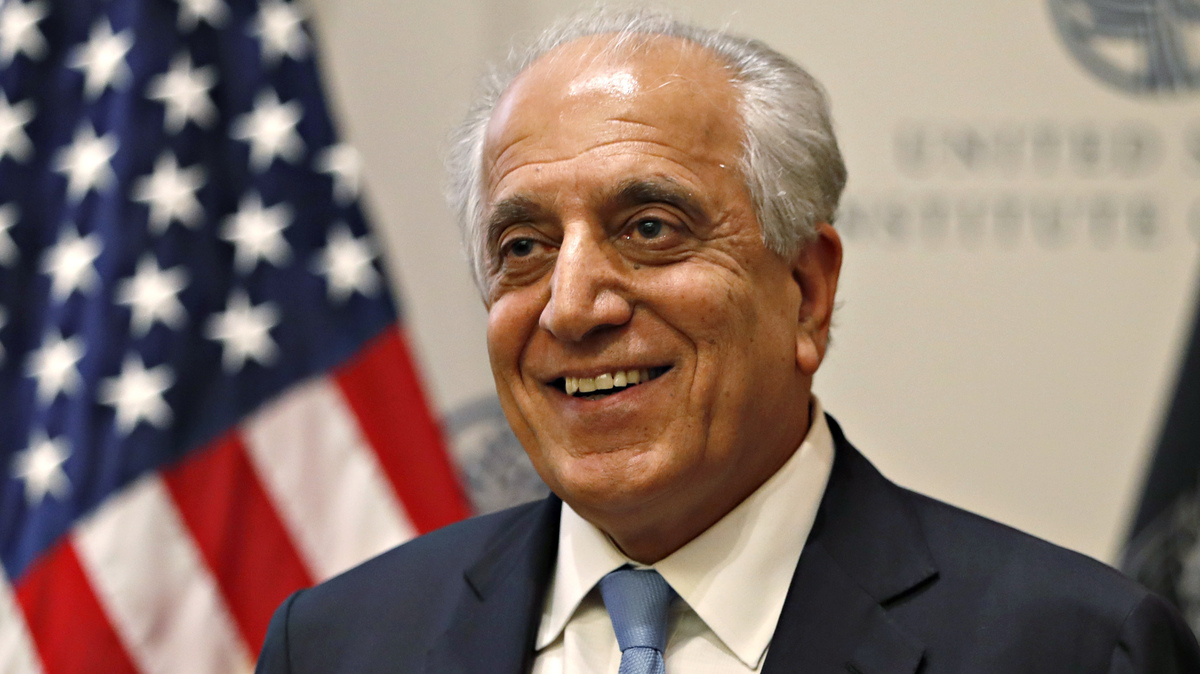 Zalmay Khalilzad is leading the U.S. negotiations with the Taliban. After months of talks, the two sides appear close to a deal that could lead to the withdrawal of U.S. troops in Afghanistan.

"We are not cutting and running. We are not looking for a withdrawal agreement. We're looking for a peace agreement," Zalmay Khalilzad, the Trump administration's envoy on Afghanistan, said recently.

But even if the two sides reach a deal, a host of sticky questions remain.

Moreover, what kind of role would the Taliban play in Afghan politics, and would it accept changes since it was driven from power in 2001, such as increased opportunities for women?

Human rights observers are concerned that a deal could significantly roll back women's rights.

"I think if we look at the gains made since 2001, you know, women's rights have been at the forefront of those gains, and they've been hard fought," Patricia Gossman of Human Rights Watch recently told NPR. "I think women ... rightly fear that in any deal, or if in fact things don't lead to peace but lead to renewed fighting, women's rights will suffer."

Finally, militant groups such as ISIS could play a complicating role. Over the weekend, a suicide bombing at a wedding in Kabul killed at least 63 people, and the attack was reportedly claimed by a local ISIS affiliate.

Trump faces a tough decision. He consistently says he wants to pull U.S. troops out of Afghanistan — one of the few points of agreement with most Democratic presidential candidates.

But the president is getting pushback from the military and other parts of the national security establishment. They are warning that a U.S. pullout could lead to an unraveling of Afghanistan.

The Americans train Afghan troops, they gather intelligence and they carry out airstrikes.

Rahmani, the Afghan ambassador, stresses that a real peace deal will need to be rooted in trust to succeed.

"What we are seeing now, the way it's going now, that does not ensure and build that trust that is required for a peace deal to succeed, for a real peace to find its way to Afghanistan," she said.

The Afghan government wants security guarantees to make sure the Taliban can't resort to violence if they don't get their way politically.

The government also wants to preserve the country's political system, which includes a presidential election on Sept. 28.