Accessibility links
For A Few Sweet Hours, The Confitería Del Molino In Buenos Aires Reopens The preview reopening of the Confitería del Molino, a long-shuttered art nouveau pastry cafe near the Argentine Capitol, prompted lines around the block — and, for some former patrons, good memories. 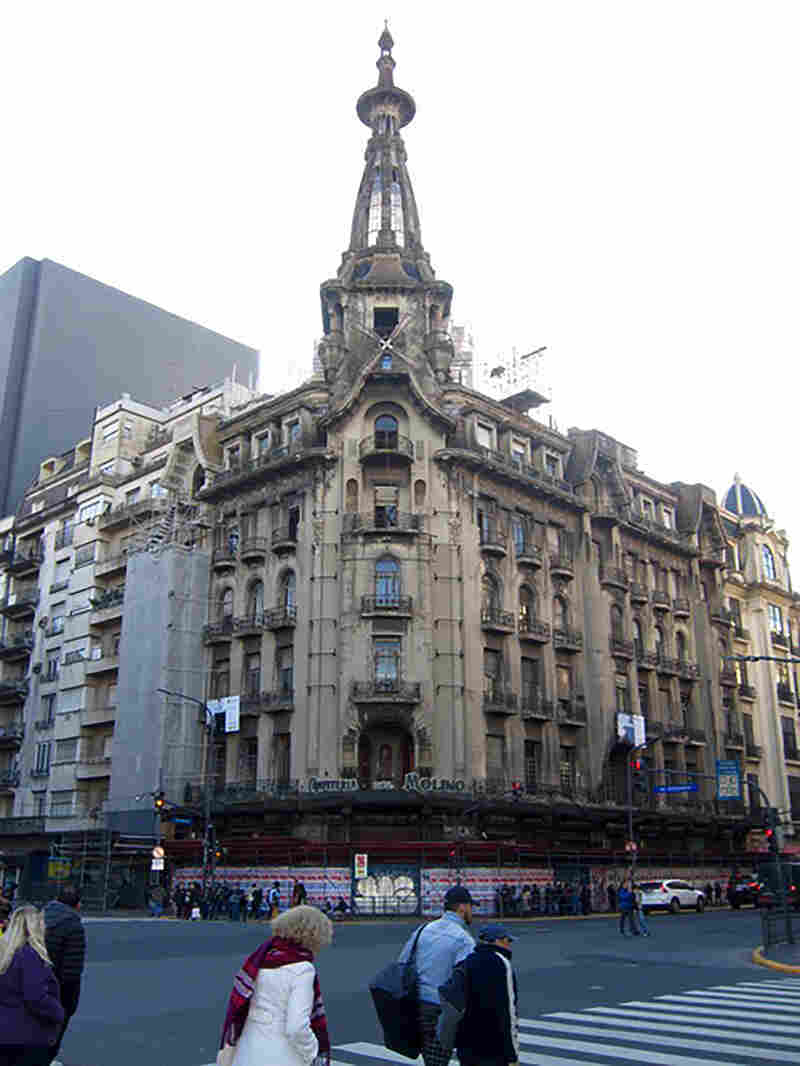 The Confitería del Molino, once a bustling pastry shop adjacent to the Argentine Capitol building, reopened recently for a few hours in a sneak preview of its full restoration. Carlos Schroder for NPR hide caption 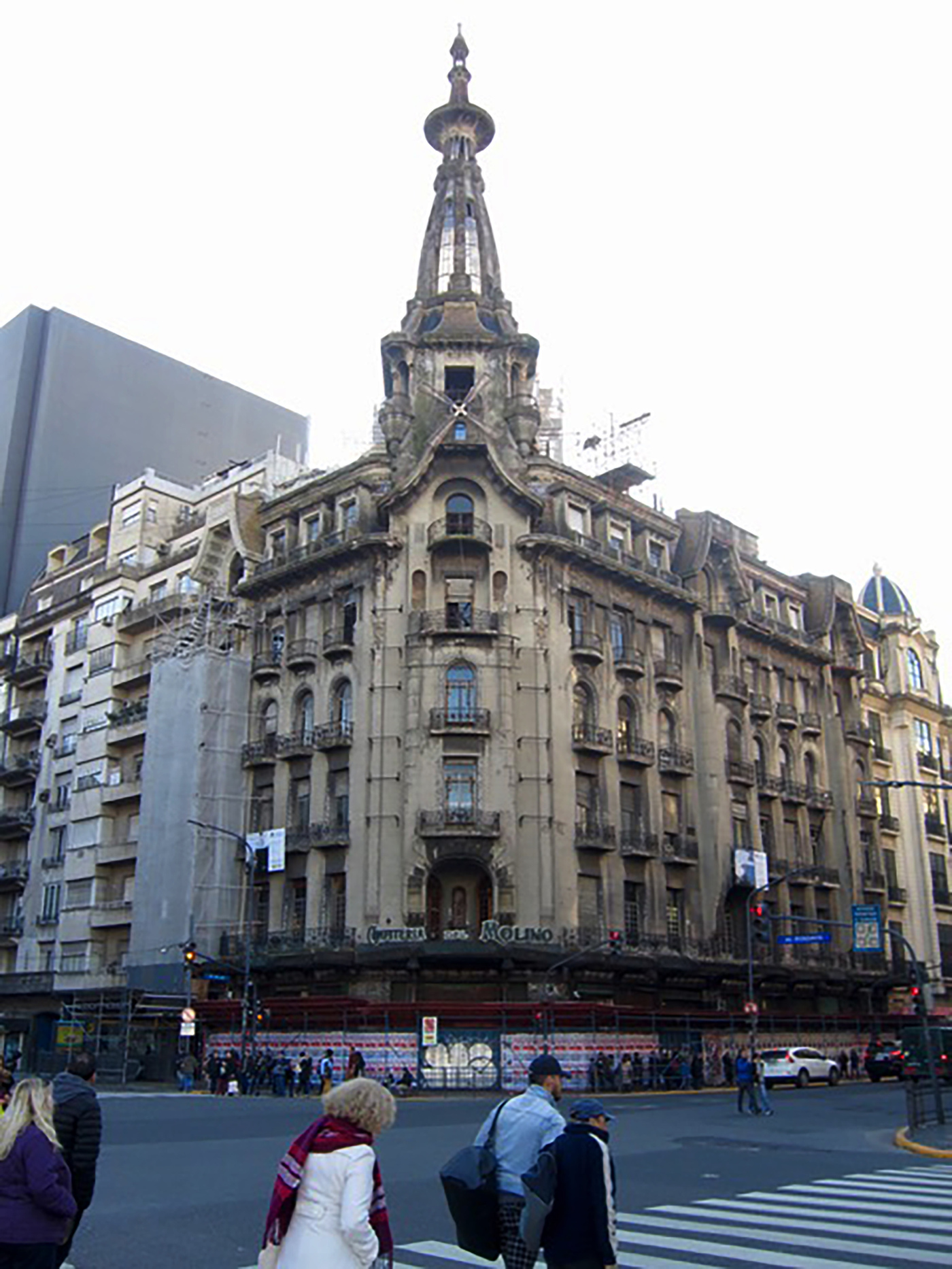 The Confitería del Molino, once a bustling pastry shop adjacent to the Argentine Capitol building, reopened recently for a few hours in a sneak preview of its full restoration.

When you stand in the center of Plaza del Congreso in downtown Buenos Aires, looking at the dome of Argentina's Capitol building, there's an imposing grey ghost of a building just to the right. It's a deteriorating art nouveau masterpiece: the Edificio del Molino, closed for decades, and now in the middle of a multi-year restoration.

The restorers opened it to the public for just a few hours recently, and a crowd started lining up on the sidewalk hours early, two and three abreast. When the doors finally opened, the line stretched almost three blocks.

At least half the visitors appeared young enough that they could never have been inside the extravagant, long-shuttered cafe known as the Confitería del Molino. They could never have passed under the windmill above the entrance, to gaze at the windows inside that tell the story of Don Quixote — more than 1,000 square feet of stained glass that make the marble-and-mahogany ground floor look like a cross between a cafe and a cathedral.

It's a place of such storied romance, it even inspired a tango: "Gricel," in which José Maria Contursi, a longtime Confitería patron wrote of his hopeless passion for a married woman. For 22 years, he drowned his sorrows at the Molino, until one day word reached him that the woman he loved was now a widow. They were reunited here, married at long last.

The history goes all the way back to 1916, when the cafe — which sits across the street from the Congress building — opened on July 9, marking 100 years of Argentine independence. The structure above the Confitería, finished the following year, was a marvel of its time: illuminated by electric lights, that windmill on its roof spinning slowly. It's topped by a cupola that rose to 213 feet, making the Edificio del Molino one of the tallest structures in the city.

Guillermo Garcia, who is with the federal commission that's restoring the Molino building, filled me in quickly on the building's background: commissioned by pastry chef Cayetano Brenna to house his cafe on the ground floor, it was designed by Italian architect Francisco Gianotti, and was a landmark and gathering place for more than half a century. But the 1970s brought neglect, decay and vandalism; by the mid-'90s it was boarded up and abandoned.

In 1997, the cafe was declared a National Historic Monument, which protected it from demolition, and in 2014, the Argentine Congress passed a bill providing funds for the building's purchase and to restore it to its former splendor. The law calls for the ground-floor cafe to reopen under private management with its original menu.

That pleases Bella Friszman, who positively bubbles as she remembers the pastries, sandwiches and sweets she savored when her father brought her here as a child for teatime in the 1930s. "The tea service was delicious," she remembers, especially the "postre imperial" with caramel.

Clearly it made an impression, which may be why her boyfriend, a soldier, later chose this spot to meet on a day she remembers vividly: March 26, 1950. She thought he wanted to talk about problems he was having with his regiment, but her girlfriends knew better: "No way! Dress up! This is going to be serious!"

They were right. She laughs at the memory: Her boyfriend met her on the corner, escorted her to a table and said something clumsily formal to the effect of "our closeness is required." It was a marriage proposal — and she accepted.

The historic character of the Molino building is being refreshed. All the things Bella remembers — marble, stained glass, golden chandeliers — are being buffed and polished. "It was really spectacular," she says.

On the main level, a string quartet played amid crumbling plaster. There's still lots for the workers to do; they found more than 15,000 artifacts, from plaster molds to old menus, and are now re-assembling them as if they were all pieces in a 3D jigsaw puzzle.

Upstairs, they've already got the smoking lounge and ballroom gleaming — from the balcony for the orchestra, to the glass-paneled doors, to the herringbone-patterned dance floor. According to Garcia, they'll be part of a new cultural center next year, when they get that windmill turning on the roof by fixing the original motor.

This one-day glimpse of the Confitería del Molino, he promises, is just a taste. And the crowds suggest that the taste is whetting appetites for pastries — and for old-world ambiance.