Accessibility links
Andrew Yang On Why He's Running For President : The NPR Politics Podcast In an ongoing series, The NPR Politics Podcast is hitting the road and interviewing 2020 Democratic presidential candidates. In this episode, Tamara Keith and New Hampshire Public Radio's Casey McDermott sit down with entrepreneur Andrew Yang to ask about why he's the best pick for president. This series is produced in collaboration with NHPR and Iowa Public Radio. 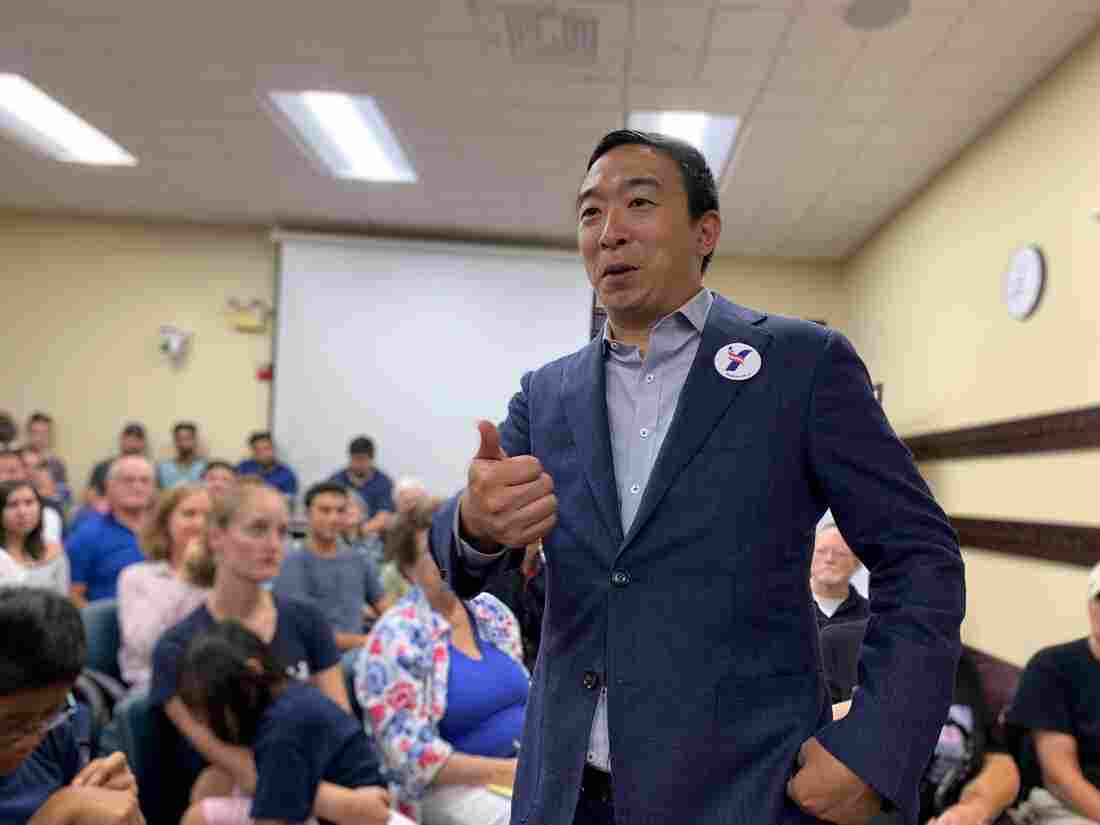 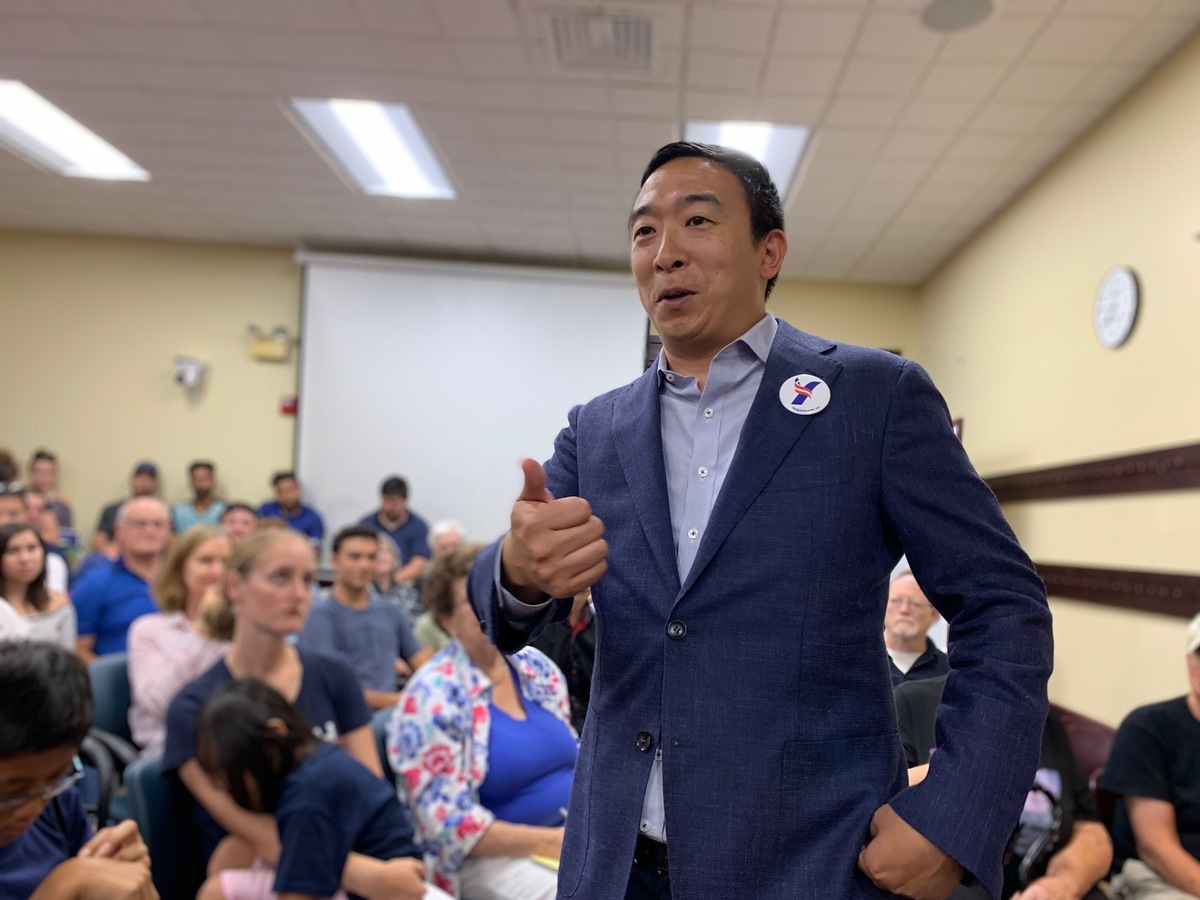 Andrew Yang at a campaign event at a public library in Plaistow, N.H., last week.

Andrew Yang is running for president with a message that automation and artificial intelligence have already destroyed millions of American jobs, will destroy millions more, and there's little anyone can do to stop it. He says climate change is "much worse than even the most pessimistic projections." And yet, in an interview with The NPR Politics Podcast and New Hampshire Public Radio, the 44-year-old serial entrepreneur says he is an optimist.

"I'm not someone holed up in my basement waiting for the waters to overtake me," Yang said. "I'm trying to fight it with every fiber of my being. And that to me speaks to my sense of the possibilities still in front of us."

Yang drew a packed crowd to a public library in a small town in southern New Hampshire on Friday night — a diverse group in terms of age, race and gender. Some were curious voters trying to see as many candidates as they could. Some were part of the Yang Gang, shorthand for those all-in on Andrew Yang's candidacy. For someone who has no history in politics and was largely unknown until he launched his presidential campaign, Yang was greeted with a rock star reception. And, unlike some governors and members of Congress, Yang has already qualified for the fall debate stage.

Yang's answer to his doom and gloom descriptions of the economy and many other problems is a universal basic income proposal he's calling the "freedom dividend" — $1,000 a month to every U.S. citizen 18 years and older.

I talk a lot about the problems in people's communities that they can recognize. And to me it's a mystery why other Democrats aren't focused on the same problems. When I grew up, I thought of the Democrats as the party of the working class, the party of the little guy or gal. And, to me, who are the little guys and gals in our economy today? It is the retail clerk, the fast food worker, the truck driver, the call center worker. The people who feel like their futures are being pushed more and more to the side. ...

I think that many people who voted for Donald Trump felt like the Democratic Party was not speaking to them and the problems they saw in their communities, and I am. So that's winning me a critical mass of Donald Trump supporters, which is, to me, crucial for the Democratic nominee. The whole point is to beat Donald Trump.

On reclaiming an Asian stereotype

It was something a supporter said to me initially. He said: "You're the opposite of Donald Trump; you're an Asian man who likes math." And I thought, "Oh, that's actually pretty clever." And so then I used it at the next event and it got raucous applause and laughter and then said, "OK. Not being a total idiot, I should probably say that again." And in my case, I am an Asian man who likes math. I think most Americans are savvy enough to know that that's not true of every Asian person. But it does, to me, reclaim a stereotype that happens to be true in my case.

Most politicians will say, "We can do it; we can beat it." I just told the truth [at the second Democratic debate], which is that we're only 15% of the world's emissions. Even if we were to go zero carbon, the Earth would continue to warm in all likelihood because of the energy composition of other countries. Now, I take climate change very, very seriously. It's an existential threat to our way of life. Apparently, I might take it more seriously than even some other people who believe it's serious because I think it's worse than anyone thinks.

So I think we should move toward renewable energy sources as fast as possible but also proactively try and mitigate the worst effects and even try and restore our habitat in various ways by reforesting tracts of land and reseeding the ocean with kelp, marine permaculture arrays and things that can help rehabilitate what we've done — because right now, the Atlantic Ocean is losing 4 to 8% of its biomass every year. Then you can do the math on that — it's a catastrophe in the making.

On whether he's an optimist or a pessimist

I've started several multimillion-dollar organizations. I'm running for president and I'm currently either in fifth or sixth place depending upon where you look. You don't do any of those things if you're not an optimist. I believe we can arrest the decline of our civilization. I believe we can evolve in the way we think about work and value. I think we can give every American a freedom dividend of $1,000 if a majority of us get together and say that's what we want to do. I'd say these are profoundly optimistic decisions and actions. I'm not someone holed up in my basement waiting for the waters to overtake me. I'm trying to fight it with every fiber of my being. And that to me speaks to my sense of the possibilities still in front of us. I'm a parent. I've got two young boys. And I'll be damned if I just rest while the future I see coming up just overtakes us all.

On being "intimate with defeat"

I have failed so many times in my life from when I was young to now. I mean, just so many humiliating defeats. I mean, the ones that you think of as most significant is — my first company totally flopped. And if you start a company you have to tell everyone you know you're doing it so then everyone knows it flopped. There's no hiding it. There's no like, "Oh, it went OK." It's like, no, everyone knows.

When I was young, I tried out for soccer team. Didn't make it. Basketball team, didn't make it. School play, didn't make it. Like, I was constantly getting cut, losing whatever it was. Certainly my profile was not like, oh, you know, star of the high school play, student body president — that was not the profile. So I feel like I'm very intimate with defeat. And I think it's actually good training as an entrepreneur because one of the things we're doing with our young people is we're treating them to fear failure. Let's say you're a salesperson. If you can sell 20, 30% of the time then you're actually doing great. ... Even now when I talk to New Hampshire voters, if I talk to a group of 150 voters I don't expect 100% of them to be like "yeah, Yang Gang" immediately.