Accessibility links
U.S. Recycling Industry Is Struggling To Figure Out A Future Without China China is no longer taking the world's waste. The U.S. recycling industry is overwhelmed — it can't keep up with the plastic being churned out. This doesn't bode well for our plastic waste problem. 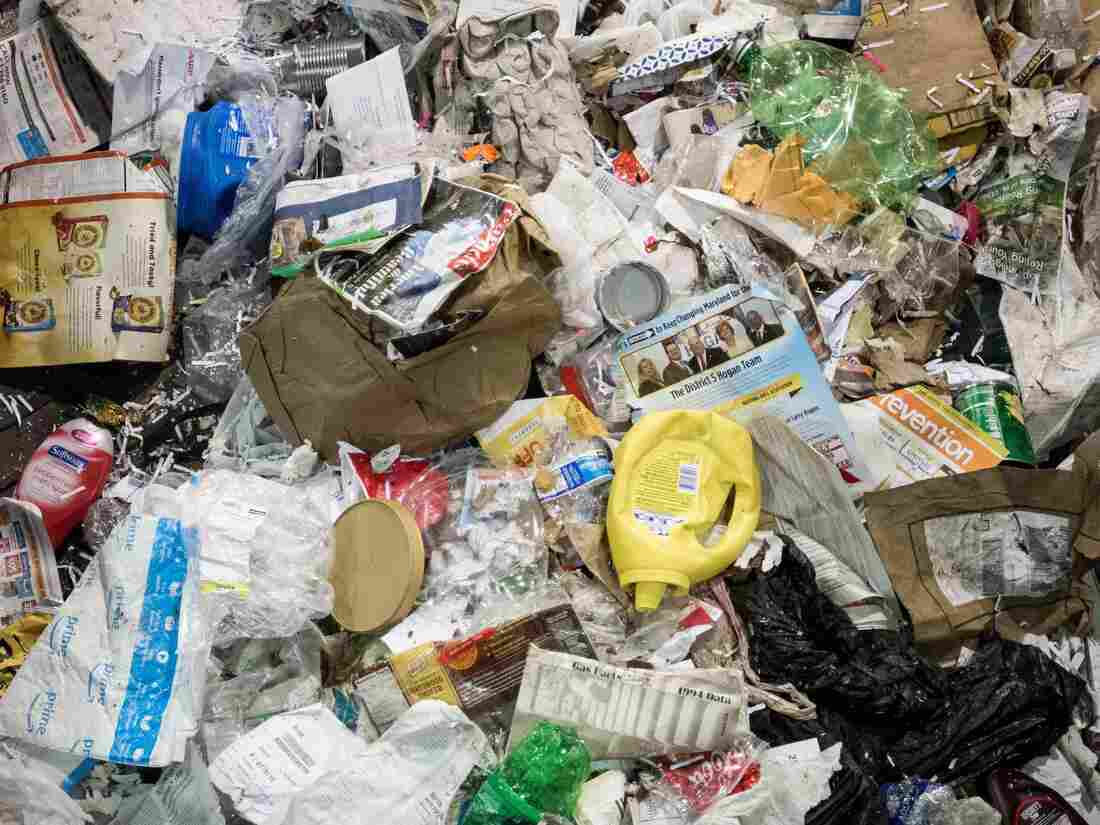 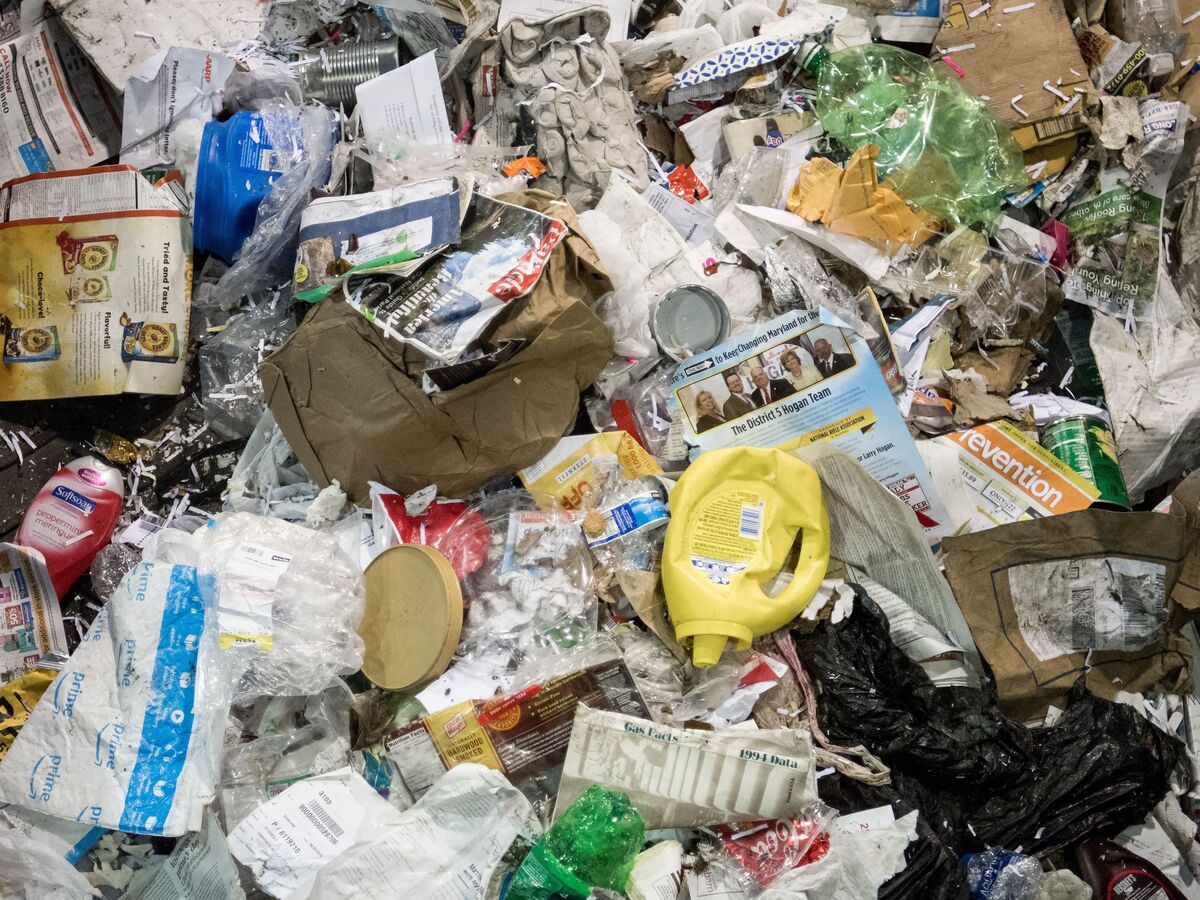 Trash sent for recycling moves along a conveyor belt to be sorted at Waste Management's material recovery facility in Elkridge, Md. In 2018, China announced it would no longer buy most plastic waste from places like the United States.

The U.S. used to send a lot of its plastic waste to China to get recycled. But last year, China put the kibosh on imports of the world's waste. The policy, called National Sword, freaked out people in the U.S. — a huge market for plastic waste had just dried up.

Where was it all going to go now?

In March, executives from big companies that make or package everything from water to toothpaste in plastic met in Washington, D.C. Recyclers and the people who collect and sort trash were there too. It was the whole chain that makes up the plastic pipeline. It was a time of reckoning.

John Caturano of Nestlé Waters North America, which makes bottled water, said plastic is getting a bad reputation. "The water bottle has in some ways become the mink coat or the pack of cigarettes. It's socially not very acceptable to the young folks, and that scares me," he said during a panel called Life After National Sword.

Sunil Bagaria, who runs recycling company GDB International, took his colleagues to task. "Forever, we have depended on shipping our scrap overseas," he bemoaned. "Let's stop that." European countries, he added, "are recycling 35% to 40% [of their plastic waste]. The U.S. only recycles 10%. How tragic is that?"

After a couple of days of this, a woman named Kara Pochiro from the Association of Plastic Recyclers stood up and said not to panic. "Plastic recycling isn't dead, and it works, and it's important to protecting our environment, and it's essential to the circular economy," she reassured.

"Circular economy" is now a catchphrase that some say is a way out of the plastic mess. The idea is essentially this: Society needs plastic, but people need to recycle a lot more of it and use it again and again and again. That will eliminate a lot of waste and cut down on the avalanche of new plastic made every year.

So how does circularity actually work? A good place to find out is at a recycling company called TerraCycle in Trenton, N.J. The company's global vice president for research and development is Ernie Simpson. A cheerful man with a Jamaican accent, he works out of a small lab at TerraCycle's headquarters. 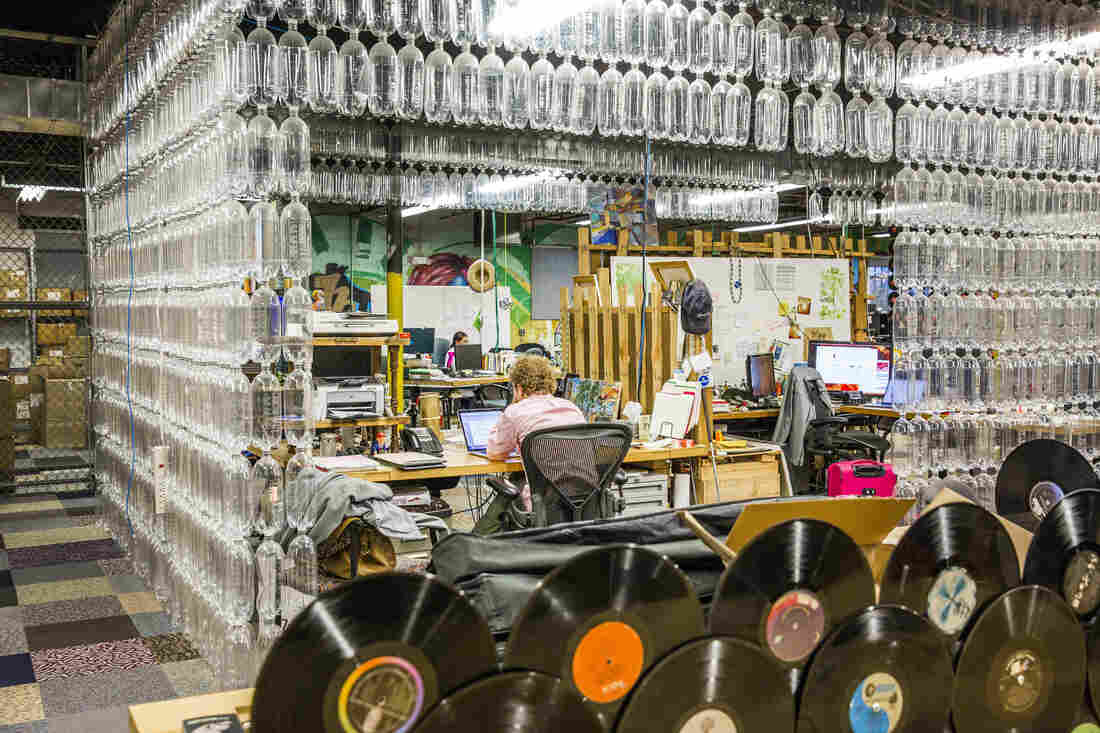 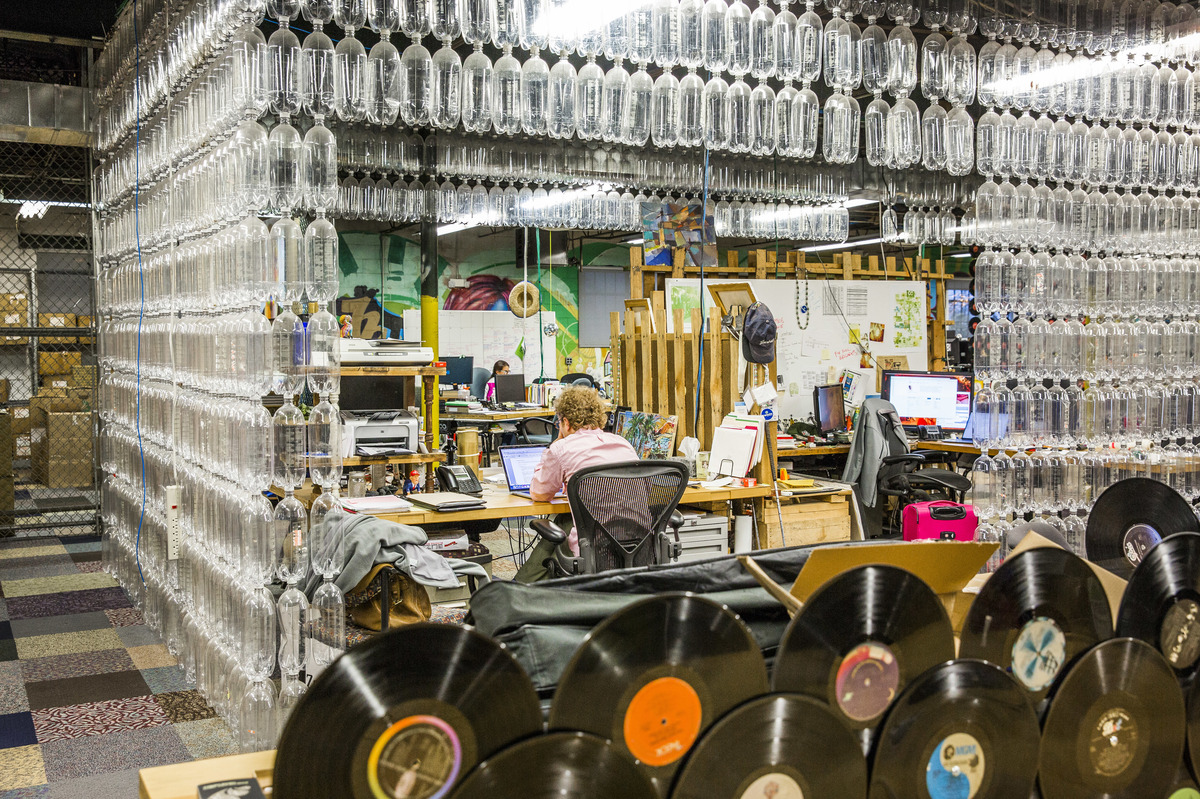 Plastic bottles surround an employee at a workstation inside recycling company TerraCycle's headquarters in Trenton, N.J., in 2017.

He's also a physicist who's part of a collaboration with Procter & Gamble to turn plastic trash into new products. In his lab, Simpson has an array of very sophisticated and expensive equipment — a Fourier-transform infrared spectrometer and a calorimeter, which use light or heat, respectively, to determine the chemistry of plastic. What goes into those devices is junk.

Simpson holds up a clear plastic bag. Inside, he says, "is the famous beach plastic from the ocean": wrappers, caps, bottles. To recycle any of it, he has to know what kind of plastic each piece is made of.

How many kinds of plastic are there? "Ohhhh," he sighs. "Indefinite, just about. There are about 20 different categories of material, but there are blends and there are hybrids." Almost all possess their own characteristics, some easily recyclable, many not. Some can be melted down; others shredded mechanically or chemically broken down. They end up as pellets the size of small marbles. These go to fabricators that turn the material back into products.

"And so that's how the famous Head & Shoulders shampoo bottle was created," Simpson says, referring to what P&G calls the "world's first recyclable shampoo bottle made from beach plastic." That's a form of circularity — pouring old plastic into new bottles.

There's a catch though. "This particular one," Simpson says of the beach plastic, "is probably three times as expensive as virgin" — virgin being brand-new plastic made straight from oil and gas out of the ground. This is one of the obstacles to circularity: It costs a lot. There's not a lot of money to be made from recycling to begin with, and it's tough for recycled plastic to compete with virgin plastic made cheap by the boom in U.S. oil and gas production. And there aren't nearly enough recyclers in the U.S. to handle the tsunami of new plastic pouring out of the petrochemical industry. 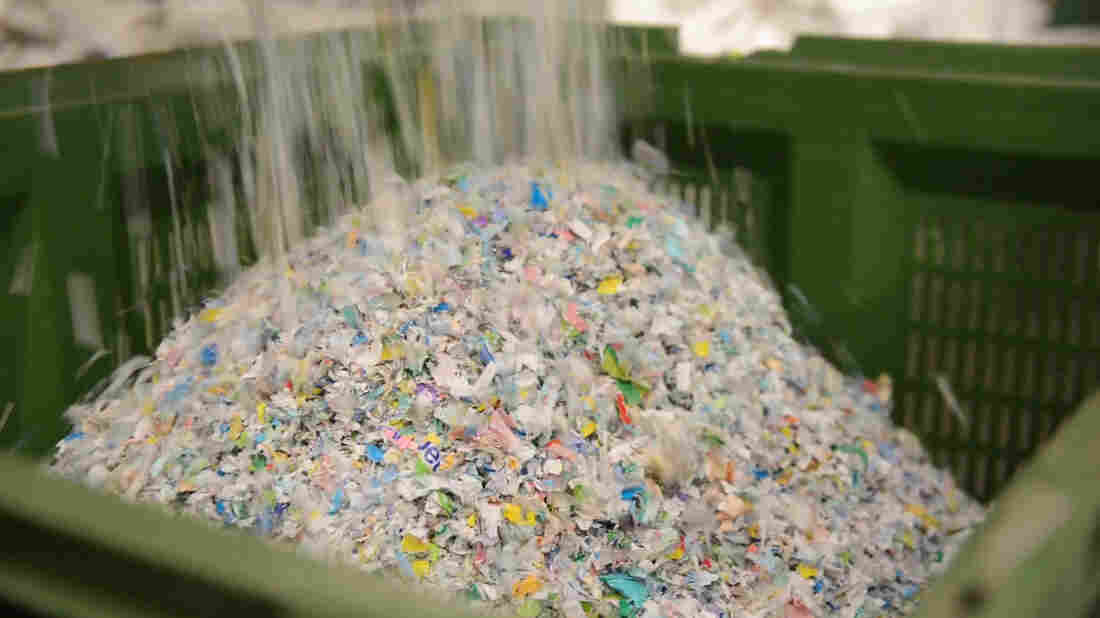 Material collected by TerraCycle is shredded for processing. Courtesy of TerraCycle hide caption 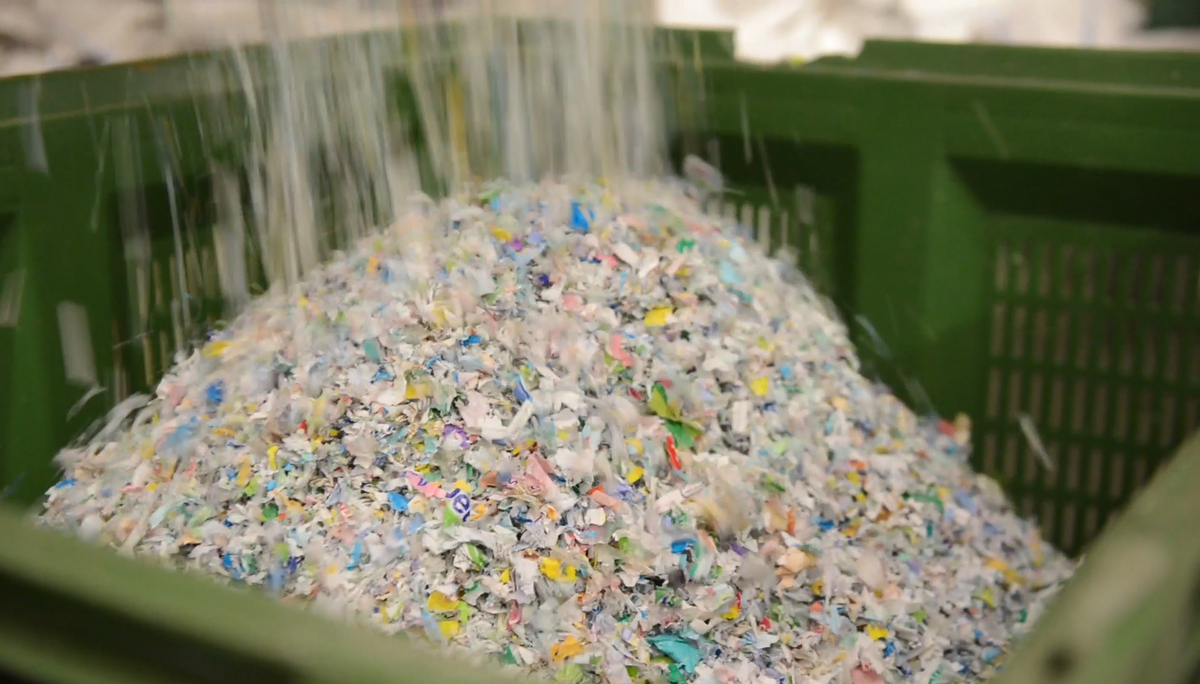 Material collected by TerraCycle is shredded for processing. 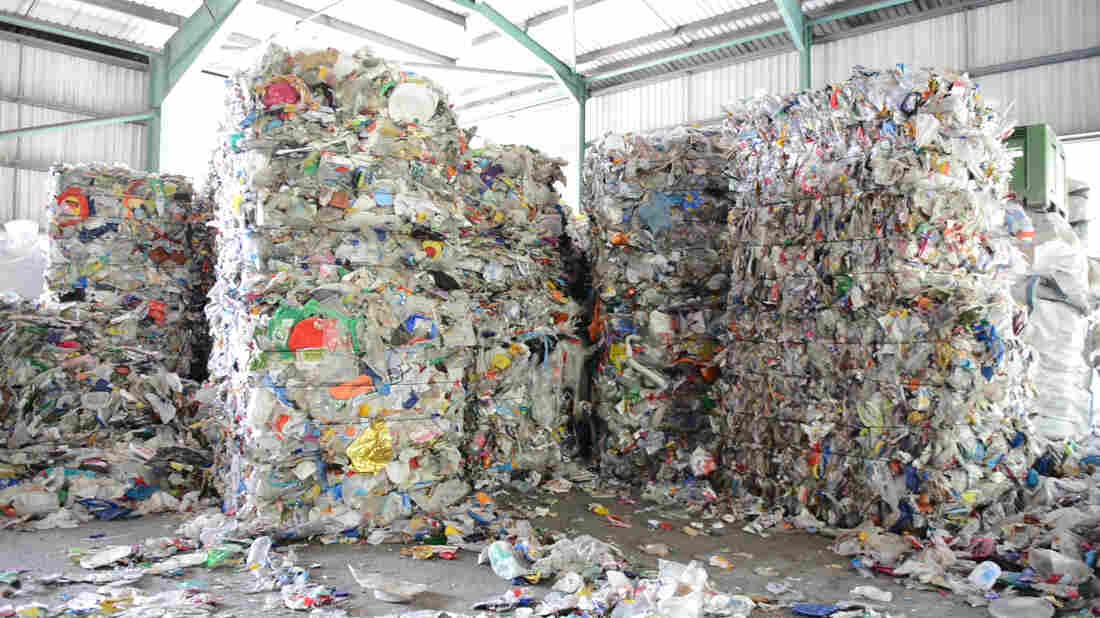 Collected material, including plastic, is baled at TerraCycle. Courtesy of TerraCycle hide caption 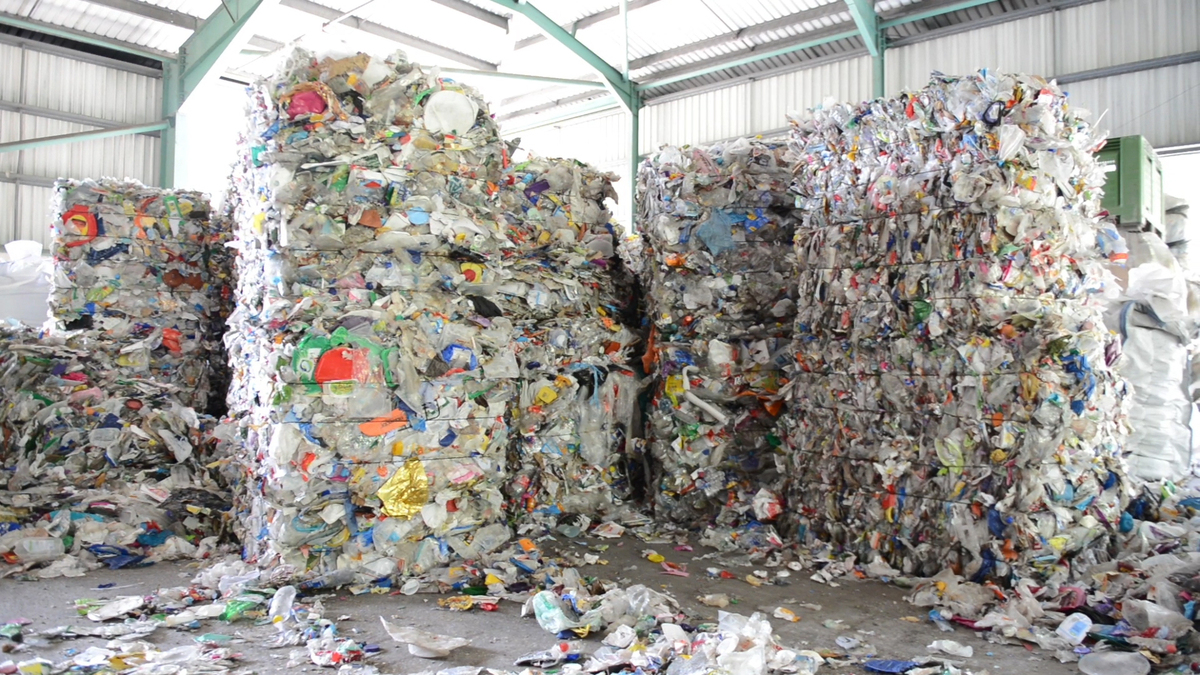 Collected material, including plastic, is baled at TerraCycle.

"Recycling is the underdog," says Keefe Harrison, CEO of the Recycling Partnership, a nonprofit that seeks to boost the industry. "We're fighting an uphill battle to make it cost competitive from day one." One problem, she says, is the U.S. outsourced so much of its recycling to Asia that the domestic industry languished. And there's the fact that plastic manufacturers keep making more and more of it, and consumer brands like Procter & Gamble, Nestlé and Walmart keep wrapping more consumer goods in it.

Harrison explains: "So we've got these companies producing this new packaging and new materials and new plastics in such a scientific- and business-driven way, and then [they] rely on the disjointed network that is recycling to get it back. And [recycling] is not robust." That's an assessment shared by others, such as global financial analysis company IHS Markit.

Several petrochemical companies have joined big consumer brands in pledging to make most of their plastic recyclable, reusable or compostable within the next decade or two. Their group, Alliance to End Plastic Waste, has promised to spend $1.5 billion over five years to do that.

But as environmental groups like Greenpeace and Break Free From Plastic point out, just because something can technically be recycled doesn't mean it will be. There has to be an industry robust enough to do it — and a profit at the end of the day. And, they say, building up recycling allows plastic producers to keep making 300 million tons of new plastic every year (half of which is for single use) and to put the burden of cleaning up the waste on someone else.

Pochiro, of the Association of Plastic Recyclers, says recycling does need help — from consumers, for example. "We're trying to make consumers understand that recycling isn't just about putting your container in the bin," she says. "You also need to buy recycled," meaning products that contain recycled plastic.

There's a growing market for such products, stuff like bottles, clothing, packaging or bags, for example. But it's tough to compete against cheap virgin plastic. Recycling companies need huge investments, and to get that, they have to show they have a market for their products. And for that, Pochiro says, they need commitments — voluntary or mandated by law — by consumer goods companies to buy recycled plastic.

"If a recycler can't be confident enough that they have a market for at least maybe six months to a year," she says, "then they aren't going to want to make that investment in their own facilities" to make more recycled plastic.

But there's a disconnect underlying all this talk by the plastics industry to help recyclers and the circular economy of plastic.

A report from ICIS, a plastics market research company, says the petrochemical industry will likely double its plastic manufacturing capacity from 2016 to 2024. And the American Chemistry Council, which represents, among others, plastics manufacturers, says it expects industry to spend nearly $25 billion to build new plastic manufacturing capacity by 2025. (That compares with the $1.5 billion that the industry plans to spend on cleaning up plastic waste.) The World Economic Forum has issued a report on plastic that predicts a doubling of production in the next two decades.

One thing driving that growth is the belief that demand for petroleum-based fuels will decline — the oil and gas industry is looking to produce more plastics from petrochemicals to take up the slack.

So if a new circular plastics economy recycles — that is, reuses — more old plastic, why is the petrochemical industry spending billions of dollars for a boom in new plastic? Where is all that new plastic going to go? It seems the industry isn't too worried. The American Chemistry Council's analysis includes this statement about new plastic: "In a virtuous cycle, as the manufacturing renaissance accelerates, demand for plastic products will be generated, reinforcing resin [raw plastic] demand."

Essentially, go ahead and make it, and people will find a way to use it.