Accessibility links
Interview: Jason DeParle, Author Of 'A Good Provider Is One Who Leaves' Jason DeParle's new book follows one Filipino family for over 30 years. He had originally intended to research slum life — but discovered that migration was what lifted the family out of the slum. 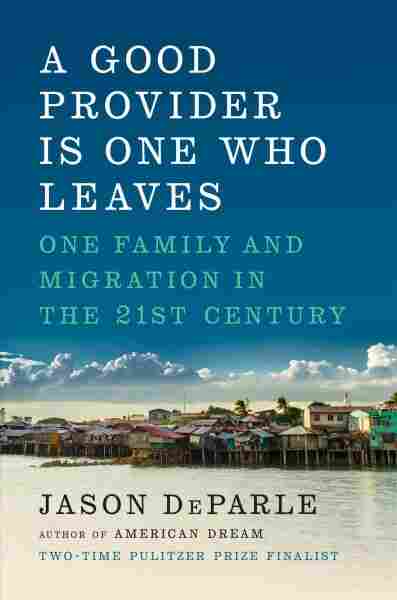 A Good Provider Is One Who Leaves

One Family and Migration in the 21st Century

In 1987, reporter Jason DeParle went to sleep on the floor of a shanty in Manila for the first time. He had come to the Philippines to find out more about poverty in the developing world, and when he got there, he asked a nun with connections in a slum to help him find a family to take him in. "She walked me through the squatter camp and auctioned me off on the spot," he says. "I'm not sure who was more frightened, Tita, the woman I moved in with, or me."

DeParle would spend several months sleeping on Tita and Emet Comodas' floor, and he would spend the next 32 years following their family as they spread out around the world for work and a future outside the slums.

His new book is called A Good Provider Is One Who Leaves and is the story of global migration in the 21st century, as seen through the eyes of Tita, Emet and their daughter Rosalie. She was a shy 15-year-old schoolgirl when DeParle first met her, "who you wouldn't have guessed would be the teenager in the slum with the driving ambition to get out," he says. "What really leapt out to me about her high school record wasn't her grades but her attendance. In four years of poverty and actual revolution in the Philippines she never missed a day of school. ... She's now a 48-year-old nurse and a mother of three living in a suburb of Houston and working in a Texas hospital."

On his original focus on slum life

Migration was the last thing on my mind when I moved in with the family. I was interested in slum life — migration turned out to be how the family survived. Tita's husband, Rosalie's father, Emet, was a guest worker in Saudi Arabia, cleaning pools at a Saudi air base for two years at a time when the mom was home raising the kids on the money he sent back. All five of their children grew up to become overseas workers like the father. So their generation lived the rise of global migration.

I think every Filipino is aware of the risks they take in going overseas. You can't escape it in the Manila papers — some half [of] the headlines read like gold rush ads about remittance tallies setting new records, and half read like human rights complaints. You know, "We slept with dogs; we were raped; we had no food." I think the fact that so many people are willing to leave their families and take such risks and be apart for such a length of time is just another measure of their poverty and desperation.

On why immigration is the defining story of the 21st century

I think the lightbulb moment for me was when I discovered that remittances — the sums that migrants send home — were three times the world's foreign aid budgets combined.

I think the lightbulb moment for me was when I discovered that remittances — the sums that migrants send home — were three times the world's foreign aid budgets combined. Conservatives like to say poor people need to do more to help themselves. Migrants do. And after learning that, I started reading the headlines, I think, with a different eye and often saw that the story behind the story was a migration story. Whether it's global warming, whether it's terrorism, whether it's voting patterns in the United States. More and more the news seemed to me that it had a hidden migration element. I got a little obsessive about it, began to see migration everywhere — in culture, in music, in food, in art, in politics.

On how Rosalie's children assimilated once they came to America

Yeah — if you doubt the powers of American assimilation, try to keep American culture from a teenager. Rosalie, when [her] kids first got here, was so worried about preserving their what she called Filipino value, she wanted them to watch Filipino TV, she wanted them to keep speaking Tagalog, and she just couldn't keep American society out — it was in their pockets with their phones, it was in their schools, it was everywhere.

On whether Rosalie's experience in America has changed under Trump

I don't think we know the answer to that yet. I think having a president who so openly speaks of immigrants in such derogatory terms is a new experience. I don't think we know the long-term effects it's going to have on immigrant communities and how they adapt and adjust to the U.S. Because Rosalie is here legally as a permanent resident, because she's educated, because she has a job, her kids are thriving, there hasn't been any immediate impact. Whether there's gonna be a long-term impact on all immigrants, I think, is an open question.

This story was edited for radio by Jolie Myers, produced by Kat Lonsdorf and adapted for the Web by Petra Mayer.