Accessibility links
'This Is It. I'm Going To Die': India's Minorities Are Targeted In Lynchings "It's like they are trying to erase us — erase all of my people," says the widow of a Muslim dairy farmer who died after being assaulted by a mob while he was transporting cows. "It's like they are trying to erase us — erase all of my people," says Jaibuna, the widow of Pehlu Khan. The 55-year-old Muslim man was beaten to death in 2017 by Hindu men who objected to his transporting cows. Furkan Latif Khan/NPR hide caption 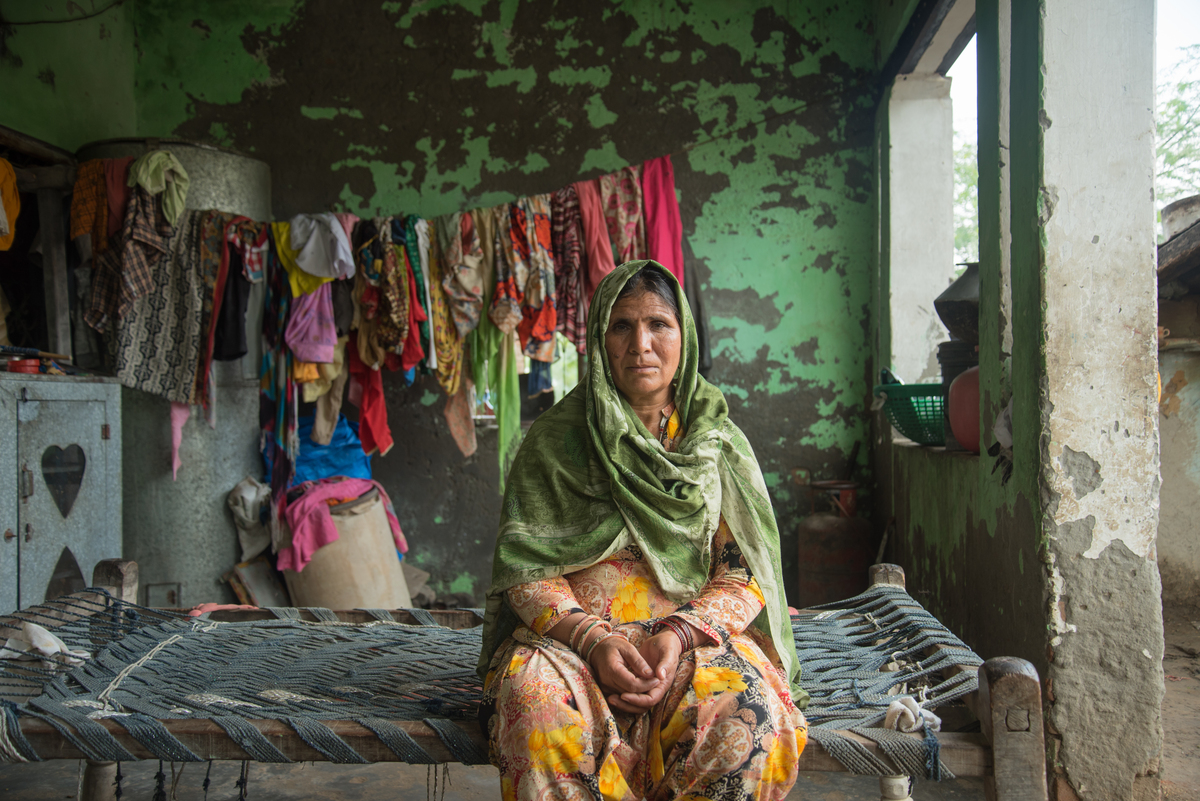 "It's like they are trying to erase us — erase all of my people," says Jaibuna, the widow of Pehlu Khan. The 55-year-old Muslim man was beaten to death in 2017 by Hindu men who objected to his transporting cows.

Last year, a long-distance truck driver, Mohammad Hashim, was hauling a load of refrigerators out of New Delhi when a dozen strangers on motorbikes forced him off the road.

They pulled him out of his truck and demanded he open the back. They wanted to see if Hashim was transporting cows or beef — which is illegal in many Indian states, because cows are sacred in Hinduism, the majority religion in India.

"But I'm just the driver, and I'm not allowed to open the back of the truck. It was locked," Hashim, 45, recalls. "So they pulled on my beard and tried to force me to chant 'Jai Shri Ram.'" 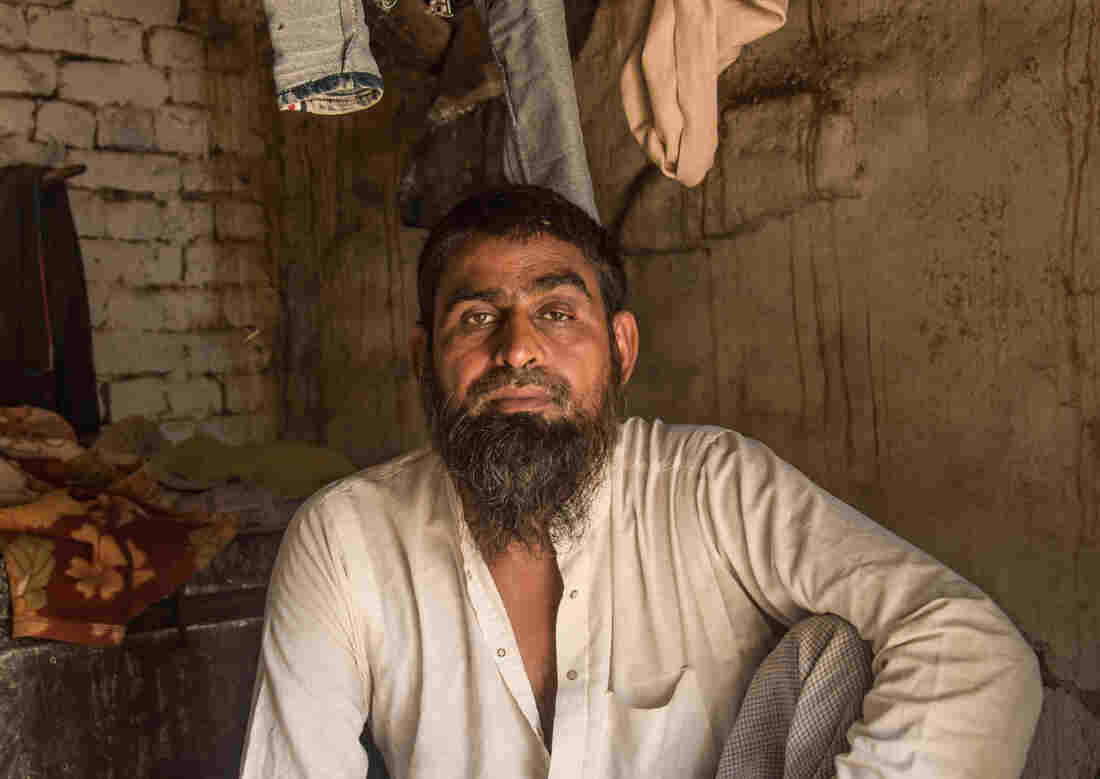 Long-distance truck driver Mohammad Hashim, 45, survived an attack by a Hindu mob last year. A dozen men on motorbikes forced him off the road and beat him. He suffered a broken leg and fractured vertebrae. Furkan Latif Khan/NPR hide caption 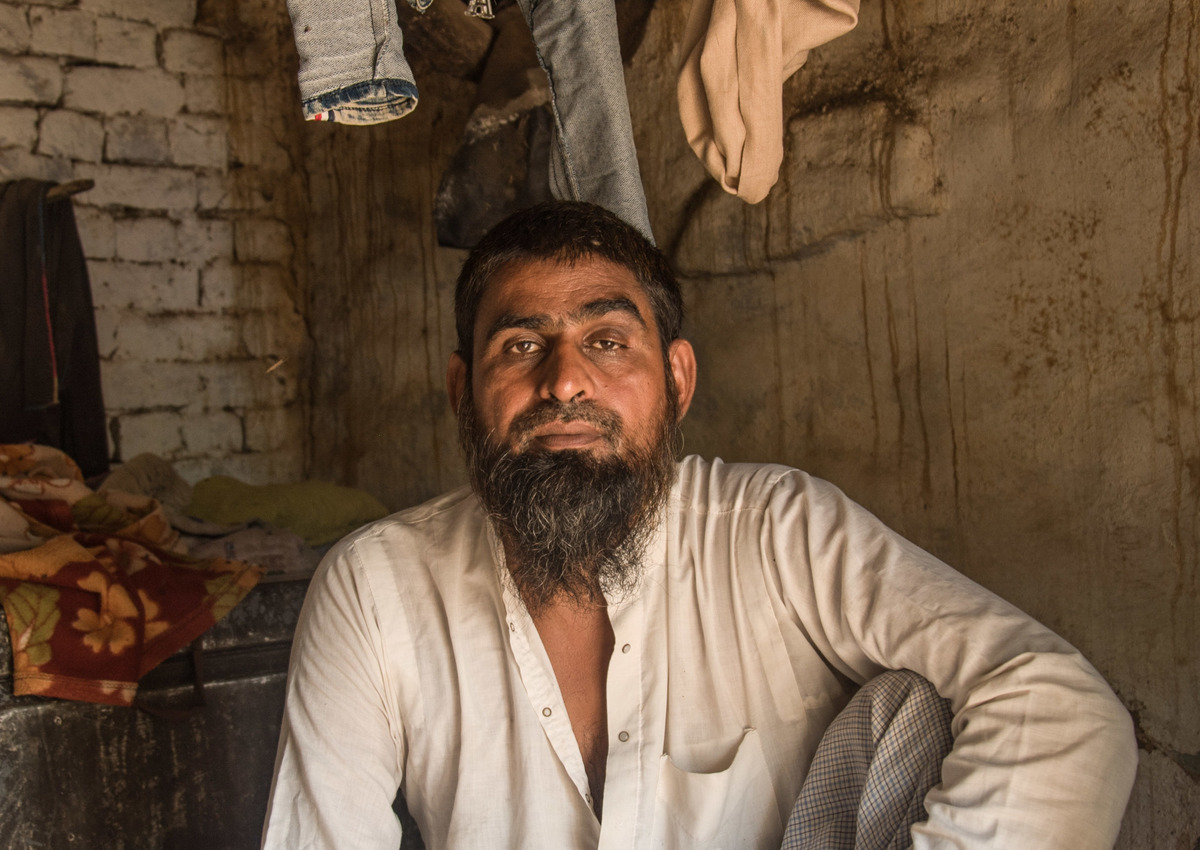 Long-distance truck driver Mohammad Hashim, 45, survived an attack by a Hindu mob last year. A dozen men on motorbikes forced him off the road and beat him. He suffered a broken leg and fractured vertebrae.

That slogan — which means "Praise Lord Ram," a Hindu god — has long been known as a prayer. Now it's an incitement to mob violence against India's minorities.

Hashim, a Muslim, refused to chant in praise of a Hindu god. So the men started beating him.

A surge in lynchings

Since the Hindu nationalist Bharatiya Janata Party won power in India five years ago, lynchings of the country's minorities have surged. In February, Human Rights Watch reported at least 44 such murders between May 2015 and December 2018. Hundreds more people have been injured in religiously motivated attacks.

Most of the victims are Muslims, members of the country's largest religious minority. They comprise about 15% of India's 1.3 billion people. Other victims include lower-caste Hindus and Christians.

Most of the attackers are devout Hindu men, known as "cow vigilantes," who take it upon themselves to enforce beef bans. Some of them claim ties to the BJP. Last year, a BJP minister met with a group of men convicted of a lynching and draped them in flower garlands.

After Prime Minister Narendra Modi won a second term in a landslide victory in May, a new parliament was sworn in, dominated by his BJP. As opposition lawmakers, particularly one Muslim politician, recited the oath of office, some BJP lawmakers taunted them with chants of "Jai Shri Ram."

Last month, a BJP state minister was filmed heckling a Muslim lawmaker and trying to force him to chant "Jai Shri Ram" outside the Jharkhand state assembly.

In an April report, the U.S. Commission on International Religious Freedom condemned what it called the Indian government's "allowance and encouragement of mob violence against religious minorities." In June, after a lynching in Jharkhand, the U.S. commission called on the Indian government to "take concrete actions that will prevent this kind of violence and intimidation." 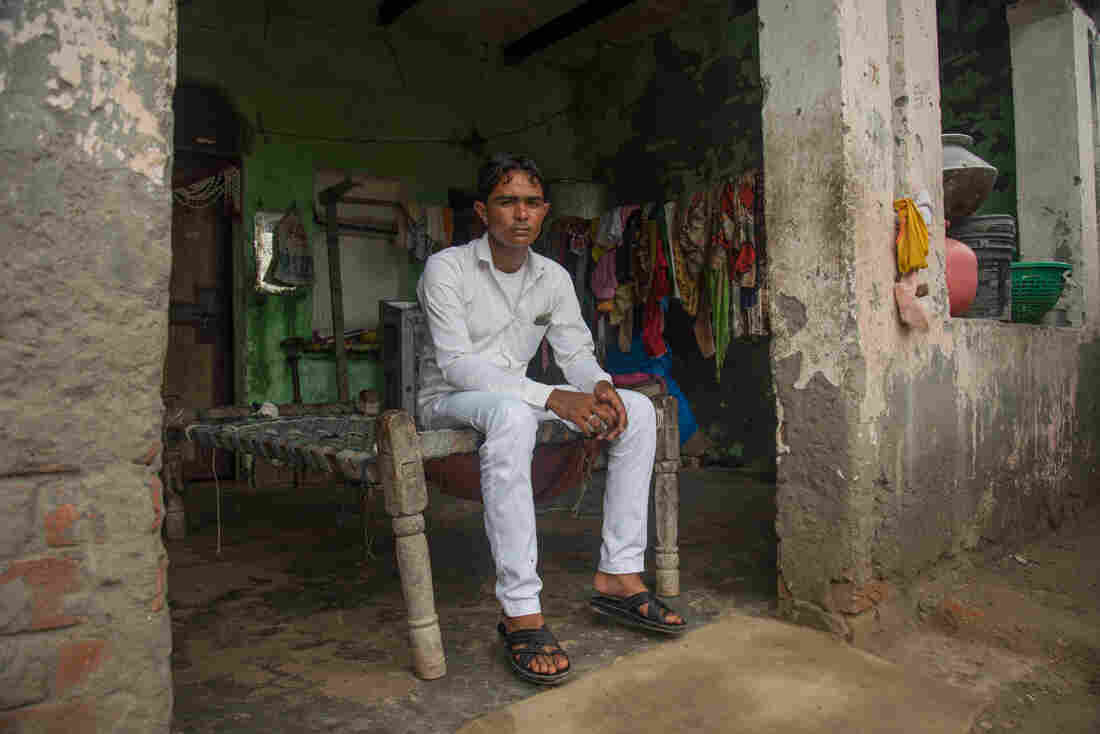 Mohamed Irshad, 27, was with his brother and his father, Pehlu Khan, when they were attacked by a Hindu mob in 2017. "My brother and I barely survived — and all of India saw what happened to our father," he says. The attackers posted a video of their assault on social media in which Khan, his white tunic splattered with blood, pleads for his life, calling his attackers "brother." Furkan Latif Khan/NPR hide caption Mohamed Irshad, 27, was with his brother and his father, Pehlu Khan, when they were attacked by a Hindu mob in 2017. "My brother and I barely survived — and all of India saw what happened to our father," he says. The attackers posted a video of their assault on social media in which Khan, his white tunic splattered with blood, pleads for his life, calling his attackers "brother."

Article 15 of India's constitution prohibits discrimination based on religion. Human rights groups are lobbying for the creation of a specific hate crimes law, but none exists in India yet.

One of India's most infamous recent lynching cases was that of Pehlu Khan, 55, a Muslim dairy farmer from Haryana state.

In April 2017, Khan and his two sons were driving home from a cattle fair in neighboring Rajasthan, with two cows and two calves in the back of their truck, when strangers on motorcycles surrounded them.

"I showed them receipts for the cows we'd bought, but they tore them up — and started beating us with hockey sticks," says Khan's son Mohamed Irshad, 27. "I suffered internal bleeding. My brother and I barely survived — and all of India saw what happened to our father."

That's because the attackers themselves recorded a video of their assault and posted it on social media. In a two-minute clip, the men praise Hindu gods as they punch and kick Khan. His white tunic splattered with blood, the father of eight pleads for his life, calling his attackers "brother."

That graphic video is how Khan's widow Jaibuna, who goes by one name, learned of her husband's death. She was waiting for him to return home from the cattle fair when a neighbor ran up and showed her the clip on his cell phone.

"People were saying, 'Don't show her, this is her family!'" recalls Jaibuna, who is in her mid-40s but doesn't know her exact age. "Everyone was panicking, and I couldn't take it. I fainted."

Before he died, Khan was able to describe his attackers to police. Six men were arrested. Charges against them were dropped, then reinstated, and the case remained in limbo for two years — until last week, when a court acquitted all of them, citing lack of evidence.

Instead, Khan was charged posthumously with cow smuggling. Police say he didn't have a permit to transport cows across state lines. Khan's two sons, who were with him that day, await trial — and if convicted, face the possibility of up to five years in prison.

"It's like they are trying to erase us — erase all of my people," Jaibuna says in the muddy courtyard of their family farm.

The family has sold off their cattle, to avoid further attacks. They're frightened. A sole buffalo remains on their farm, along with some chickens.

Former BJP lawmaker Gyan Dev Ahuja, who represented the Rajasthan district where Khan was murdered, has said he has "no regret over his death." He called Khan a "sinner."

A lack of public outcry

Videos of religiously motivated attacks in India like the one that killed Khan continue to go viral. There's a new clip on social media practically every week.

But prosecutions — of the attackers, at least — are rare. So is public outrage.

"How does a majority stay silent and witness something, unless you believe that what's happening is the right thing?" asks author Rana Ayyub, who went undercover to write a book about the BJP's role in anti-Muslim riots in Modi's home state of Gujarat, where Modi served as chief minister before becoming prime minister.

The lack of public outcry over the surge in lynchings shows that India's Hindu majority tacitly supports not murder, Ayyub says, but some discrimination against Muslims.

Some Indian analysts say the situation in India is comparable to the post-Civil War period in the United States, when many white people looked on as black people were lynched.

"The similarities with the American lynchings of the late 19th century are striking," says Prabhir Vishnu Poruthiyil, a business professor at the Indian Institute of Technology Bombay who has studied corporate India's lack of response to hate crimes.

"Most of the upper-middle class that populate[s] the corporate classes, they're also upper-caste Hindus," Poruthiyil explains. "Even if they don't agree with the lynching itself, they might be OK with the idea of stopping cow slaughter. It's a slippery slope."

As a child in Mumbai, Ayyub survived Hindu-Muslim riots in 1992 and 1993, which killed several hundred people. But she says what's happening now feels worse, because it's not a "spur of the moment" outpouring of anger. There are very specific targets.

"Now lynchings are organized on social media," Ayyub says. "People send messages to each other, saying, 'Hey, this household has beef in their fridge, let's go attack them."

She says India's Muslims increasingly perceive such attacks as being against them, rather than in defense of cows and Hindu customs. The repercussions could be dangerous, Ayyub warns. She's worried that Muslims are being alienated as Hindu nationalists revise mainstream Indian norms along Hindu lines. 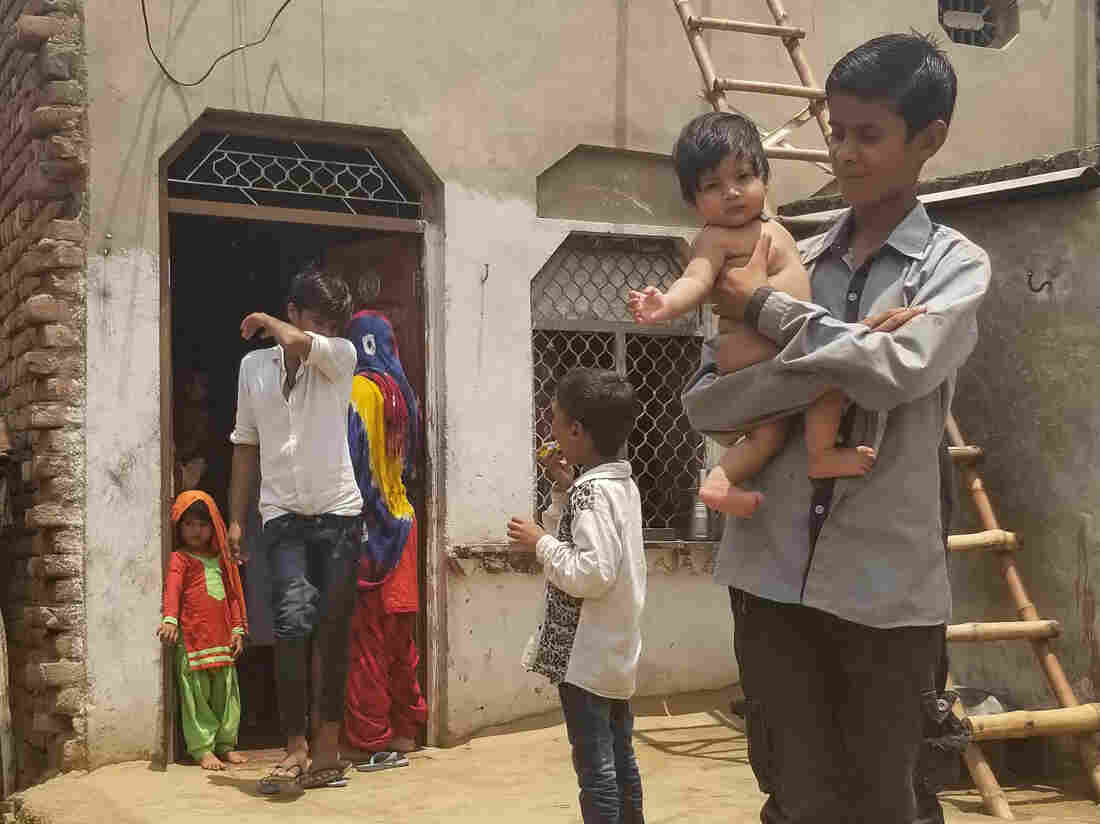 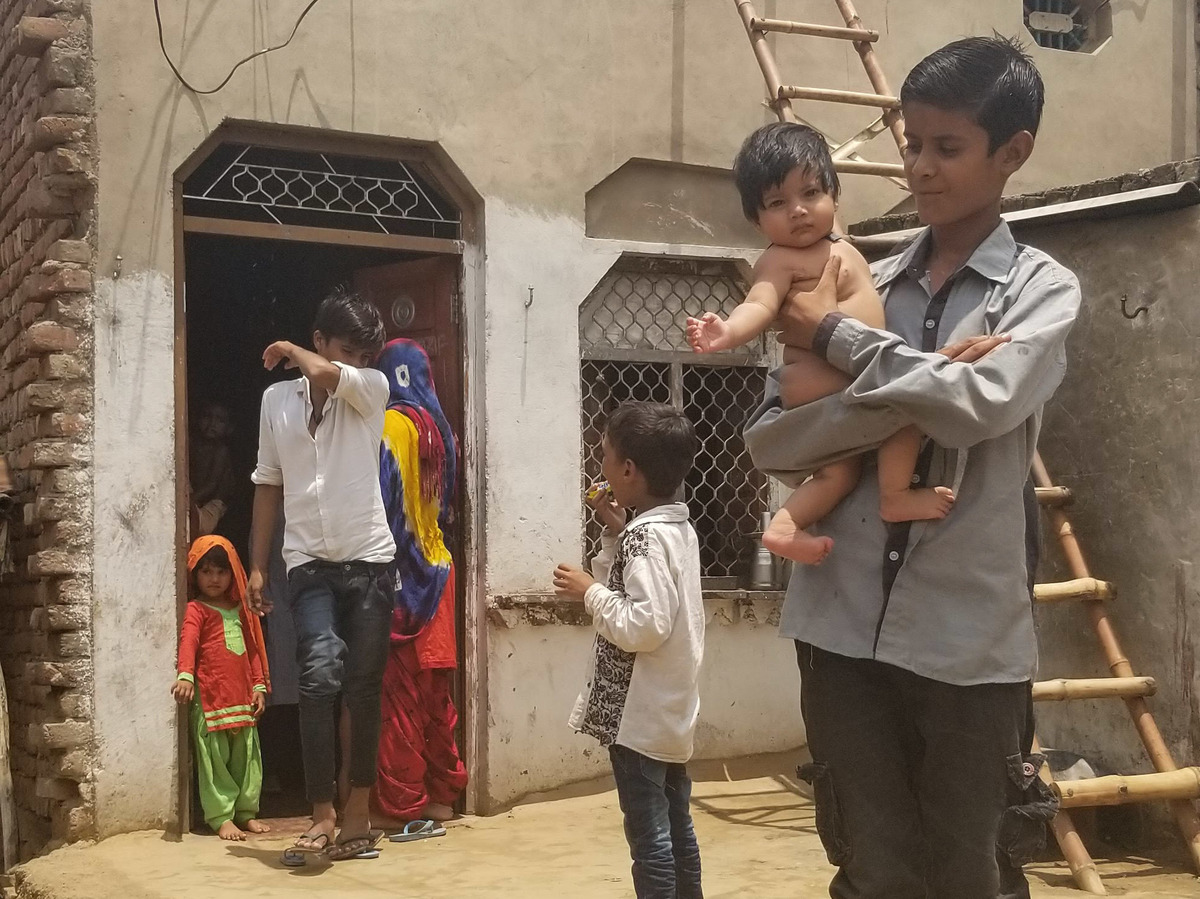 Relatives of Mohammad Hashim, a lynching survivor, gather at the family's home in Haryana, India.

There is a small, fledgling movement of Indians — Muslims and Hindus — working to fight hate crimes and help victims.

In donated office space in New Delhi, four cellphones are lined up on a desk. When one line is busy, the next one rings. This is the headquarters of a new hate crimes helpline, created by United Against Hate, a network of volunteers. Organizers say they've received 15,000 phone calls since launching in July.

Callers "are very upset. They are very worried and say, 'We are in a difficult position,'" says dispatcher Jagisha Arora. "One person called me and said, 'I'm at police station right now. Police are refusing to lodge a complaint. They are threatening us.'"

Arora, 26, logs details from each call in an Excel spreadsheet and connects callers to free legal aid in 100 different Indian cities.

But from time to time, she also gets a different type of call — from people who are angry that this helpline even exists.

"Some people call to complain, like, 'Why are you spreading this?' They accuse me and say Muslims are bad," she says, shaking her head.

Hashim, the truck driver, survived his lynching on the highway outside New Delhi. After the attack, he was bedridden for six months with a broken leg and fractured vertebrae.

He can't read or write, so his supervisor at the trucking company — a Hindu — helped him file a police report. Nothing has come of it.

Now it's time for Hashim to get back on the road. He needs to provide for his five children.

"My children say, 'Don't worry about us, Daddy. We can stay poor. We'll eat less. We want you to be safe,'" Hashim says.

They're scared that next time, their father might not come home.